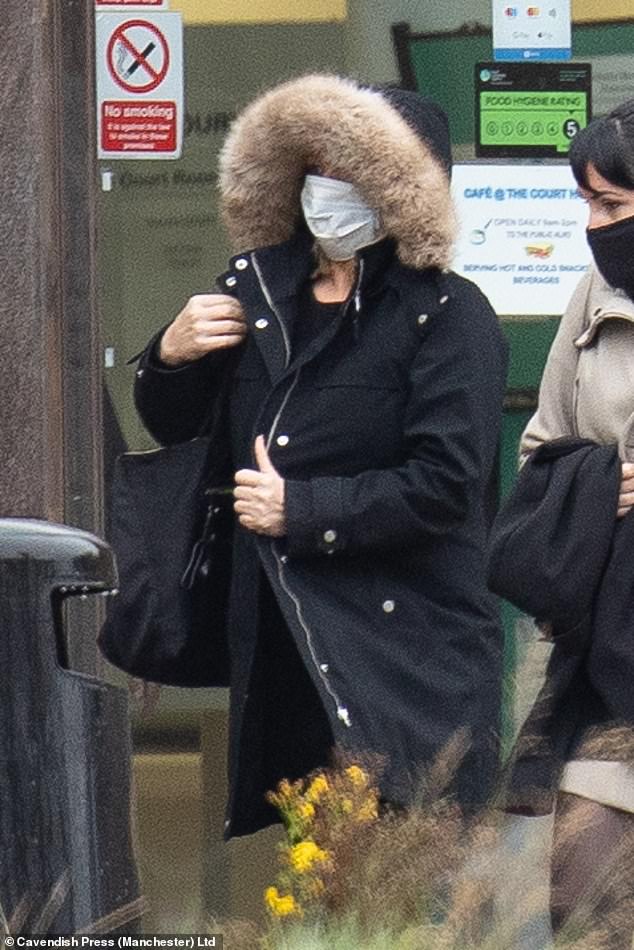 A teacher has wept after admitting causing the death of a 14-year old schoolboy in a freak road accident when she lost control of her BMW during a bout of ‘tiredness’ due to a vitamin deficiency.

Caroline Eadsforth, 43, was driving to work when she took a right hand turn too widely and ploughed into a traffic light in November last year.

The force of the impact caused it to fall over and landed on teenager Zakir Maroof as he was waiting to cross the road near his home.

Zakir was on his way to classes at Hathershaw College in Oldham, Greater Manchester, when he suffered the fatal head injuries and died on his way to hospital.

His mother and sister heard the crash and went to the scene only to discover he was the victim.

Police investigated whether Eadsforth had fallen asleep at the wheel of her 318 series estate car during the morning school run tragedy in Glodwick, Oldham, but the primary school teacher blamed the incident on having a B12 vitamin deficiency.

When asked if she dozed off, she said: ‘I don’t think so, don’t know why I hit the kerb. Sometimes I do just go when I go to sleep. Not normally, it’s like when I sit down. All I can think of is I have had problems with tiredness in the past.’ 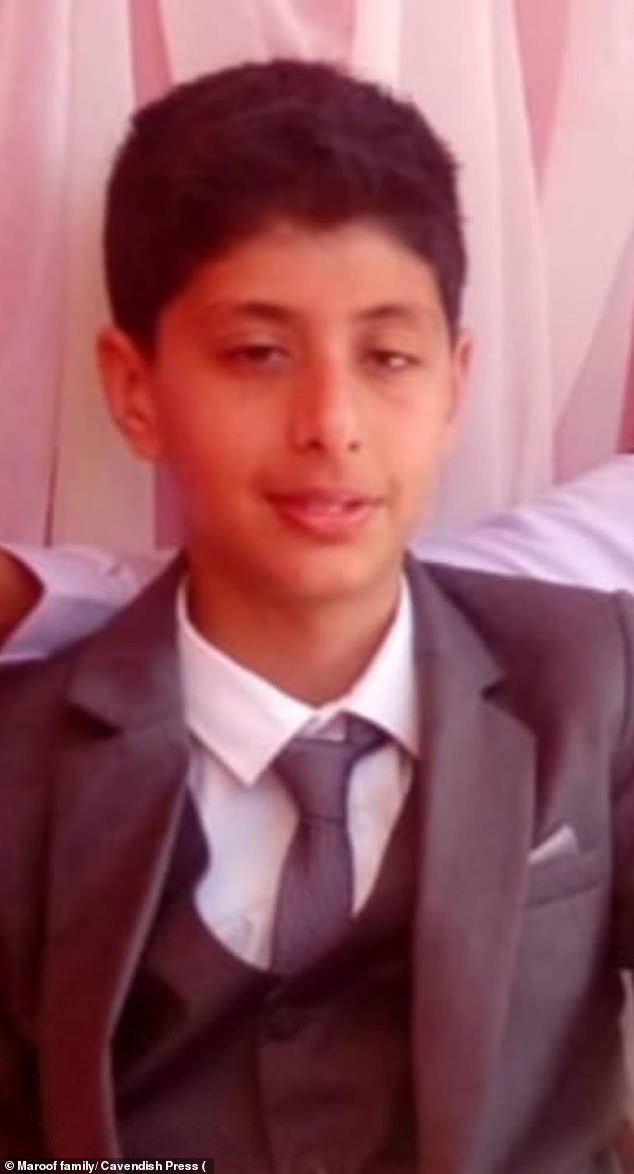 Zakir Maroof, 14, was killed after being hurt by a traffic light falling on him hit by Eadsforth

At Tameside magistrates court, Eadsforth broke down as she pleaded guilty to causing death by careless driving.

She will be sentenced at a crown court later where she faces up to two years jail under sentencing guidelines.

JPs imposed an order under Section 11 Contempt of Court Act banning publication of her address amid claims her life might be ‘at risk’.

The tragedy occurred at 8.15am on November 26 last year whilst mother of two Eadsforth was waiting in a queue of traffic to turn right at a road junction.

Prosecutor Miss Martha Dowd said: ‘Zakir has approached that junction to cross the road on his way to school. Witnesses he had a happy walk and spring in his step. Miss Eadsforth was waiting at the red traffic light signal behind several other cars which turned right without issue but she took that corner too wide. It caused her to mount the pavement and collide with the traffic light signal.

‘The force of the vehicle caused the lamppost to come down and Zakir who had approached that junction was struck. 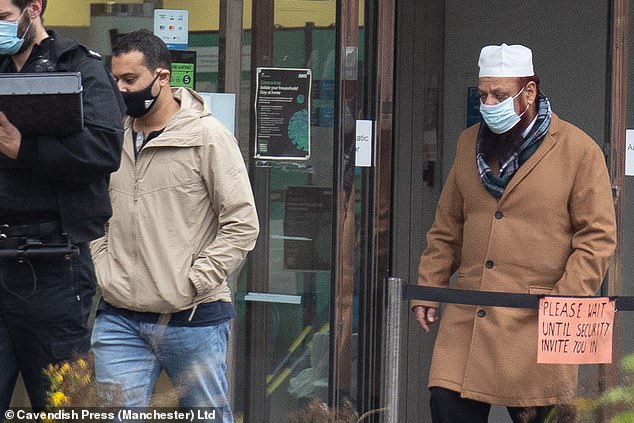 Devastated members of Zakir’s leave court after the hearing, where Eadsforth pleaded guilty

‘A forensic collision report said the BMW was at least a whole car width wide when compared to two other vehicles that had previously taken that turn. A camera shows not only was the BMW much wider but the vehicle can still be seen turning as it mounts the pavement.

‘A witness recalled seeing the car turn more sharply towards the end of the turn having taken that wide path. Zakir’s mother and sister were informed of the accident and they live very nearby and went to the scene and become extremely upset and distressed.

‘Paramedics conducted CPR but Zakir was declared deceased at 9.20am due to head injuries. The defendant remained at the scene in shock and said: ‘I was too wide, I was too far over. I hit the kerb.’

‘She confirmed she felt ‘tired at the time.’ She asked if she felt she’d fallen asleep and she said: ‘I don’t think so, don’t know why I hit the curb.. Sometimes I do just go when I go to sleep. Not normally. It’s like when I sit down.’ But there is no evidence that she fell asleep.

‘She stated she suffered from depression and anxiety and takes medication but it doesn’t come with a warning about driving or through to affect it. She stated she used the road most days without issue yet she approached the lamp post in a straight line without steering away. It shows carelessness in the manoeuvre and caused a collision that ultimately led to the tragic death of Zakir.’

In a statement, Zakir’s father Mohammed Maroof, a bus driver said: ‘My son Zakir stood at a pelican crossing waiting to cross and pressed the button waiting. Witnesses said he walked slowly and was waiting on his way to school. 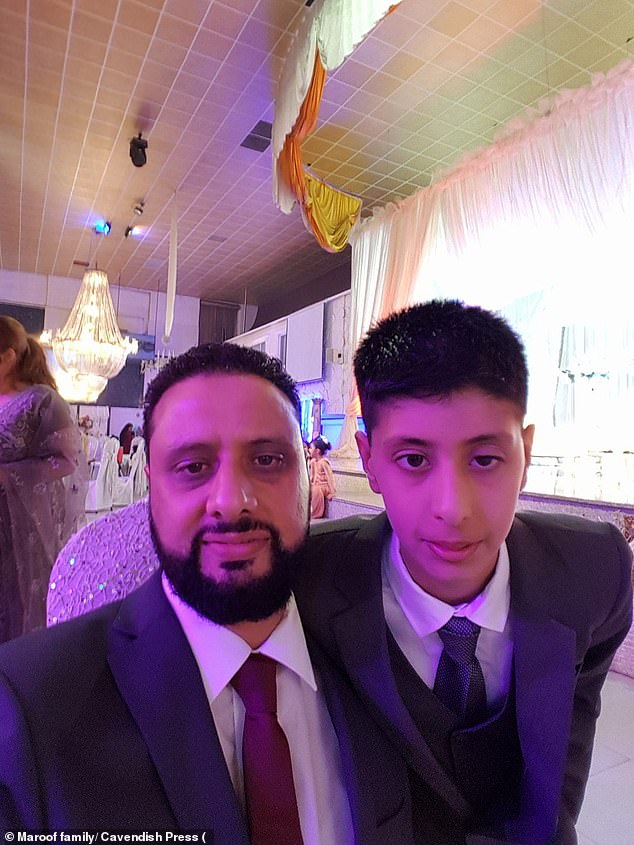 Zakir Maroof with his father Mohammed, who said his death had  ‘broken his family’

‘All of a sudden a car collided with the lamppost and this knocked it over onto my Zakir a couple of hundred yards from our house.

‘I was at work and my wife at home and she went to the scene and was there before the ambulance and police and she knew straight away it was our son.

‘He was my only son, my life and was going to look after me when I was old. We were going to live together for the rest of our lives – he was everything.

‘He would help his mother with shopping and help look after my parents or anything to do with carrying or lifting because of my bad back. He used to take my youngest daughter to the mosque and was on hand all of the time he was at home. If he was not helping me he would be helping someone else.

‘We were more like friend and brothers rather than father and son. He was my motivation and since he’s gone my back is always hurting. I relied upon him more than most parents my age would. I drive a bus and I’m always thinking of him and sometimes can’t concentrate properly on what I’m doing.

‘Our nephews used to play at our house but they do not come down anymore it’s changed our family. Zakir was a lovely young man and a helpful student and was always there. I feel as though I have lost my best friend and my would be future carer it’s a family tradition and part of our culture that the son looks after the parents.

‘Our eldest daughter is getting married at the end of this year and she’s so upset that Zakir is not going to be there. Our youngest he was particularly close with and she now always sleeps were he used to sleep and now is always in tears.

‘I’m hoping I can get over this horrendous grief but the trouble is I think of him whenever I’m in pain and it reminds me I have to face a future without him.

‘How can the driver go onto the pavement just by turning right? It’s broken my family and I have lost my son and motivation in life. His sister and mum have lost a son and a brother and my parents have lost their grandson.’

In mitigation for Eadsforth, her lawyer Maria Brannan said: ‘Nothing I say on behalf of my client is intended to distract from their grief in any way. This was a case of momentarily lapse in attention. The investigating officer asks if there is any reason at all why this accident took place but she said: ‘All I can think of is I have had problems with tiredness in the past..’

‘It’s been put down to a B12 deficiency but medical records have been checked and it’s not a factor operating on her on that particular morning.

‘Enquires were made with her mother in law who claimed she had dropped the children off that morning and that she was on good form. The mother in law describes her as being bright and breezy and there’s no evidence of her being late and rushing.

‘This was an inexplicable momentarily lapse of concentration and the consequences of which were devastating. My client was the first one out of her car and first to the side of Zakir as he lay on the pavement and offered her coat at the scene before being led away by other members of the public.

‘My client’s remorse and horror was immediate and overwhelming and has remained consistent and increasing throughout these proceedings. She has at all time been fully cooperative with the police at all times and freely admitted her guilt and horror and what has taken place that day. She’s never sought to excuse what she did she has at all times expressed responsibility for this action.

‘Even though she is unable to explain why she lost attention on this particular day.

‘She was a primary school teacher and somebody who’s life revolved around children she taught and her own children. The impact of this accident has been so great that she feels unable able to continue to teach children anymore and she doesn’t feel she’s safe to be around children and therefore has given up the career that she loved. She does not intend to drive again.’

Eadsforth was bailed for sentencing later this month. The chairman of the bench who would only give his name as ‘Mr Shah’ told her:

Having looked at all the circumstances our decision is, this cannot have been a momentary lapse of concentration.’