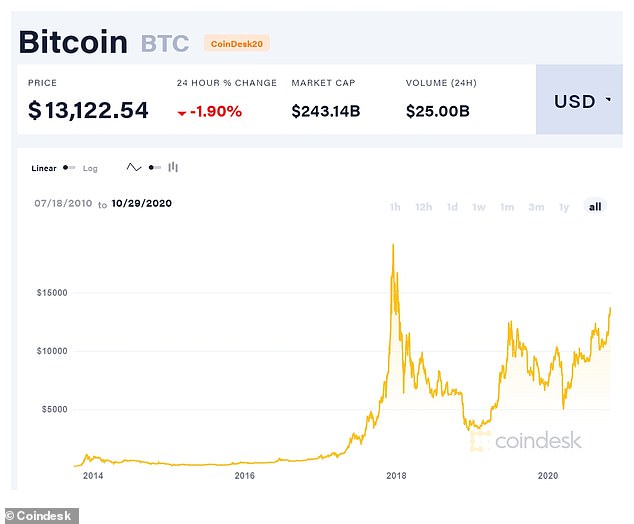 A surging appetite for bitcoin since the end of September has seen the price of the cryptocurrency soar to levels last seen in January 2018, with one of America’s largest banks even suggesting it could prove an alternative to gold.

The steep climb in the price since mid-October means the cryptocurrency has risen 87 per cent in value earlier this week compared to last year, with the total value of the 18.5million coins in circulation now $243billion.

Even though Britain’s financial regulator announced at the start of October it would ban the sale of cryptocurrency-related derivatives to casual investors from next January over the potential harm they posed, the cryptocurrency has received a string of positive headlines which have helped spur investor confidence.

Last Wednesday PayPal said from next year US customers would be able to buy, hold and sell bitcoin within its app and use it to make payments for a fee, rather than simply using PayPal as a way of funding purchases from the likes of Coinbase.

Even though those who were paid this way would see it converted back into regular money, the news saw bitcoin shoot up in value by around $800 in a day, according to figures from Coindesk.

Glen Goodman, an expert and author of the book The Crypto Trader, called the news ‘a really significant vindication of Bitcoin from mainstream finance.’

While many investors continue to see bitcoin simply as a speculative asset to try and make money on, crypto enthusiasts were likely buoyed to see more possible instances where it could actually be used as a payment method in the future. 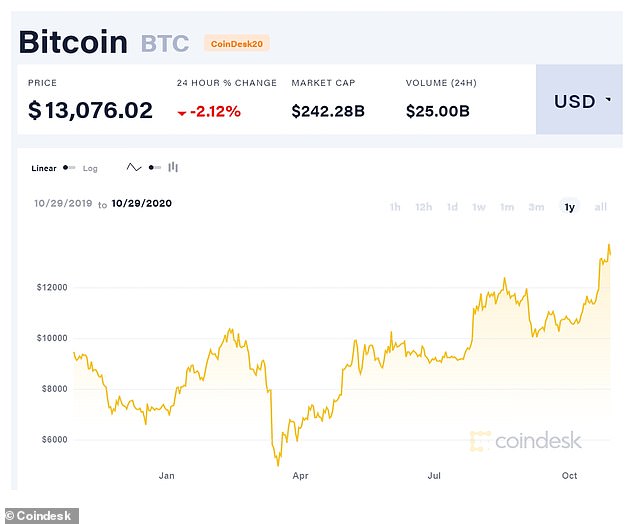 Analysts at JP Morgan suggested a fortnight ago on the back of the news from PayPal and Square that the ‘potential long-term upside for bitcoin is considerable’, and that it could even compete ‘more intensely with gold as an alternative currency’ due to its greater popularity among younger users.

The analysts added that: ‘Cryptocurrencies derive value not only because they serve as stores of wealth but also due to their utility as means of payment.

‘The more economic agents accept cryptocurrencies as a means of payment in the future, the higher their utility and value.’

The comparison with gold, even though the FCA described cryptocurrencies as having ‘extreme volatility’, is also likely another reason for the rise in bitcoin’s price since global stock markets fell dramatically in mid-March. 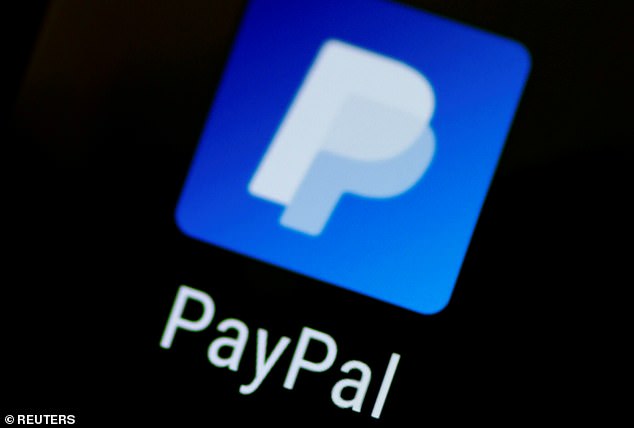 Gold is seen as a store of value due to its finite nature, while the 21million coin cap on bitcoin may ‘appeal to some investors as they see Government deficits balloon’, Russ Mould, investment director at AJ Bell said.

Central banks across the world have been pumping money into their economies as they seek to support governments and businesses through the coronavirus pandemic by keeping borrowing costs low, which some fear will lead to rampant inflation and a decline in currencies like the dollar.

Goodman added he felt the prices has ‘been largely driven by the money-printing narrative, with central banks – particularly the US Federal Reserve – expanding the money supply to counteract the effect of coronavirus on the economy.

‘The dollar has been depreciating as a consequence, and a lot of investors – and even companies – are starting to hedge their dollar holdings by diversifying into “hard currencies” like gold and Bitcoin.’ 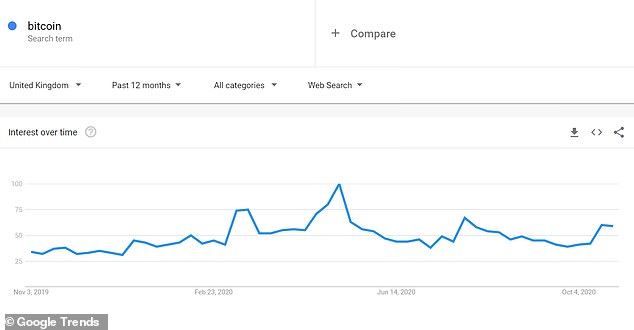 There were more UK searches for bitcoin ahead of its halving in May, even though it had less of an impact on the price

This cocktail of good news stories and action by central banks has meant that bitcoin has massively outperformed the slight price rise seen ahead of its ‘halving’ in May, which cut the reward for digitally mining bitcoin and constricting its supply.

Although data from Google Trends suggests this led to far more searches for bitcoin in the UK than has been seen over the last month, the price did not touch $10,000 until late July, two months after the event.

However, even if enthusiasts are increasingly excitable about bitcoin’s future as a payment method, it is possible that a lot of the interest is still being driven by gamblers, speculators and those hoping the price will simply keep going up.

Some 47 per cent of people surveyed by the Financial Conduct Authority in a report published in July said they had never used cryptocurrency for anything, with £260 bought on average largely ‘as a gamble that could make or lose money’.

And even JP Morgan’s analysts cautioned that in ‘the near term, bitcoin looks rather overbought and vulnerable to profit taking’.

If you do buy into bitcoin

Find out how bitcoin and the blockchain works, so that you have some understanding of the system, the ledger, the major players and the public and private key elements.

Remember bitcoin yields nothing and its main source of value is scarcity. Most bitcoin activity is trading not investing.

Research coin wallets, the digital vaults where cryptocurrency is held, and consider security carefully. Bitcoins have been stolen before, understand how this happened.

Be prepared for extreme volatility. The price can move by 20 per cent in one day and you could easily lose half of your cash in a far quicker time that investing in the stock market.

Consider how you would cash in any gains. There are reports that this has proved hard for some people. A time of market stress could lead to people being locked in and unable to trade.

Read our guide to How to be a successful investor, which looks at the far less high octane world of long-term investing and how to make it a success.

The digital currency that most will be familiar with is free from government interference and can be shared instantly online. It doesn’t rely on trusting one central monetary authority.

The underlying technology is blockchain, a financial ledger maintained by a network of computers that can track the movement of any asset without the need for a central regulator.