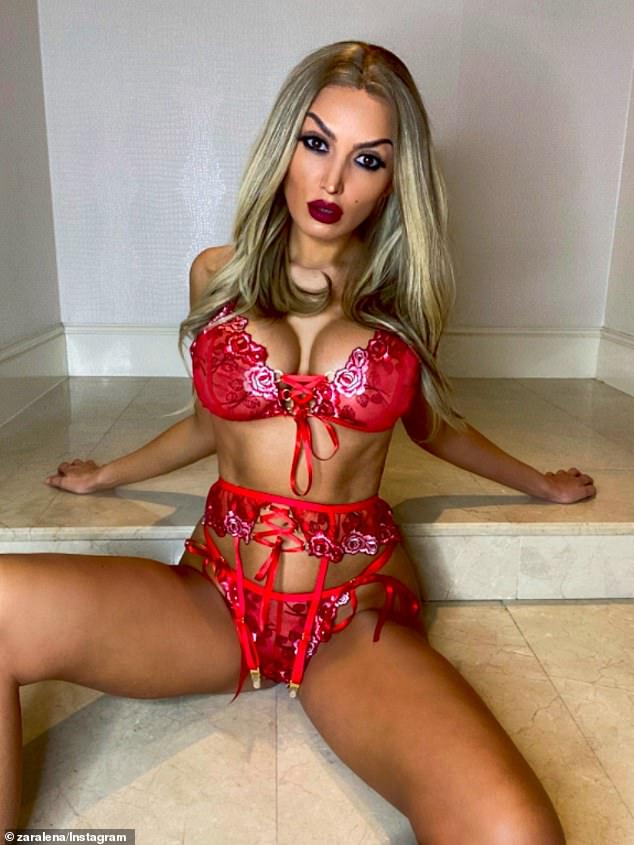 She revealed she had been diagnosed with the autoimmune disorder alopecia earlier this summer.

But despite her recent health complications ZaraLena Jackson looked confidently herself as she posed in sizzling lingerie snaps posted to her Twitter on Thursday.

The Ex On The Beach Star, 28, put on a very racy display in a red lacy set that showed off her ample assets and gorgeous figure.

Wow! Ex On The Beach’s ZaraLena Jackson put on a racy display in sexy lingerie snaps on Thursday after revealing her alopecia diagnosis earlier this summer

In another slew of sultry snaps uploaded to her social media, the Preston-based fashion designer channeled a Baby Spice look by donning a PVC bustier.

She teamed the tiny crop top with American flag-design briefs and over the knee white socks.

The star opted for a typically glamorous makeup look complete with a slick of red lip as she stared seductively into the camera. 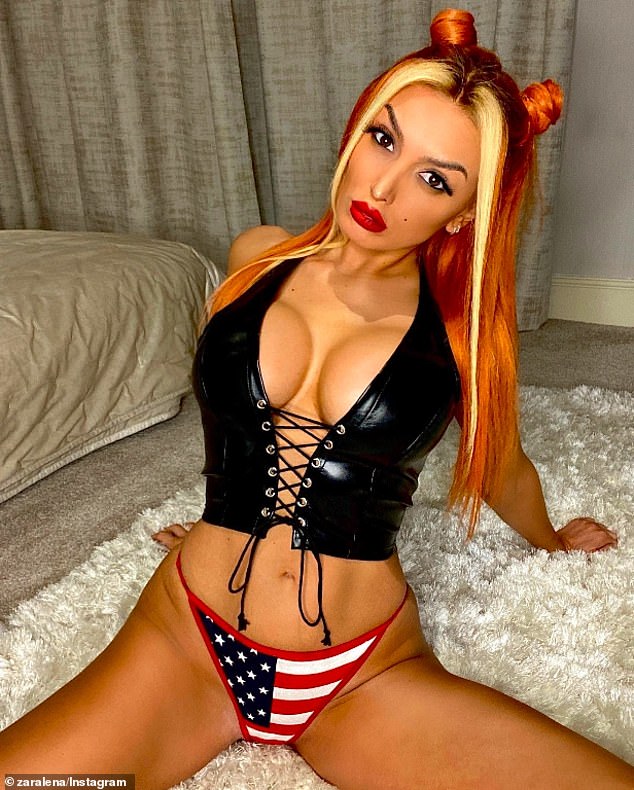 Eye-popping: In another slew of sultry snaps uploaded to her social media, the Preston-based fashion designer channeled a Baby Spice look by donning a black PVC bustier 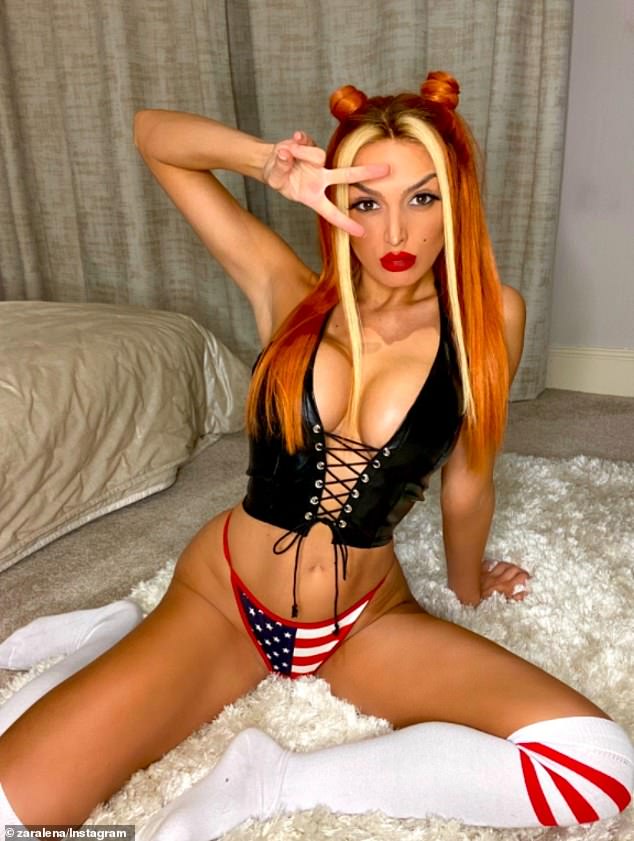 Assets: She teamed the crop top with tiny American flag-design briefs and over the knee white socks

Last month ZaraLena shaved her head after revealing she had been diagnosed with the autoimmune disorder alopecia.

Taking to Instagram, she detailed her plight with her 202k followers and unveiled her new look, as she revealed she had ‘braved the shave’ after her hair had ‘fallen in just five weeks’.

ZaraLena, who shot to fame in 2017’s sixth season of the MTV show, has been documenting her battle on social media and earlier in August gave a candid insight into the loss as she showed the impact of her hair loss. 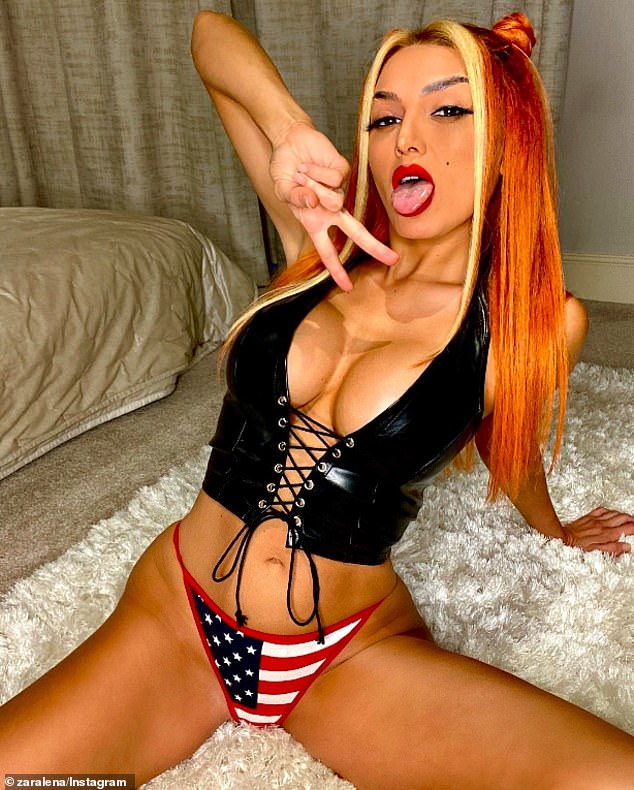 Sultry: The star opted for a typically glamorous makeup look complete with a slick of red lip as she stared seductively into the camera 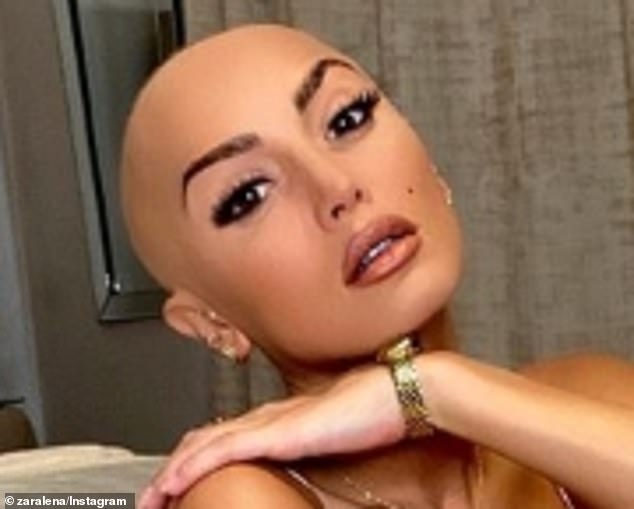 Brave: Last month the star shaved her head after revealing she had been diagnosed with the autoimmune disorder alopecia

Alopecia, which causes baldness, is thought to be an auto-immune disorder, with the immune system -the body’s defence system – turning on itself.

Eva Proudman, Vice Chair of the Institute of Trichologists said: ‘Alopecia Areata is an autoimmune disorder, where the body mistakes the hair follicle as a foreign body and attacks it from within, causing the well-recognised patchy hair loss.

‘It is known as a spontaneous condition that can recover and recur many times, but may only present once and never again, everyone is different and has a different experience.’

As well as showing the physical impact of the disorder, ZaraLena also touched on how her body and immune system are being hit. 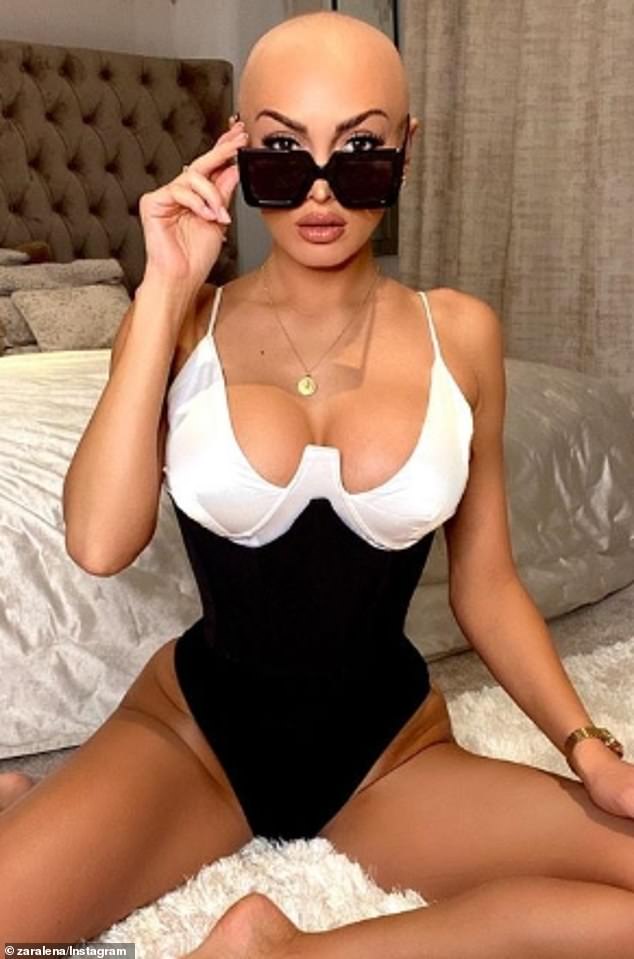 New look: Taking to Instagram last month she detailed her plight with her 202k followers and unveiled her new look, as she revealed she had ‘braved the shave’ after her hair had ‘fallen in just five weeks’ 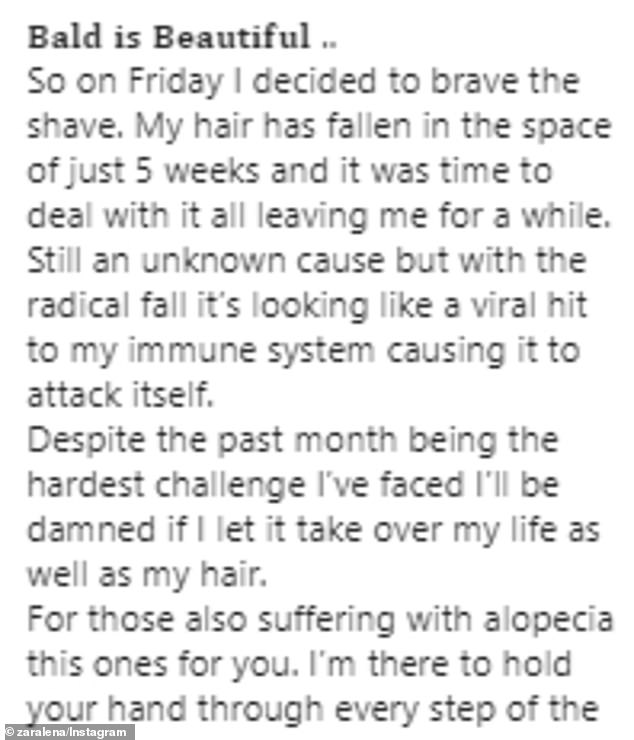 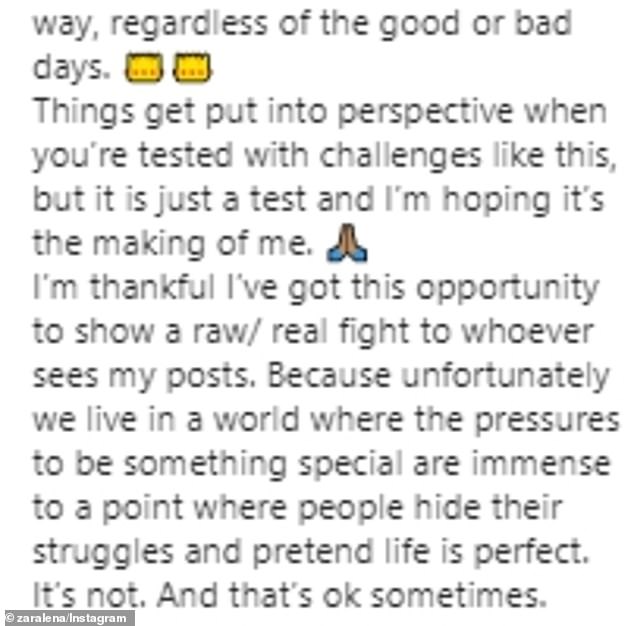 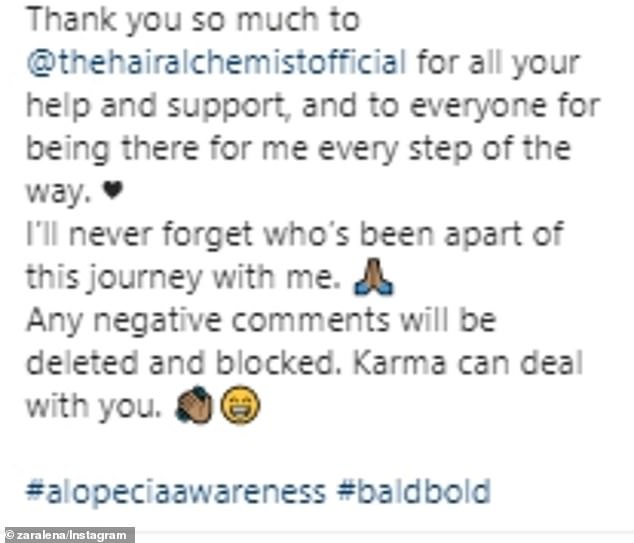 Reaching out: She penned the inspiring message to struggling fans

Alongside a lingerie-clad snap to debut her look, she penned a lengthy caption reading: ‘So on Friday I decided to brave the shave. My hair has fallen in the space of just 5 weeks and it was time to deal with it all leaving me for a while…

‘For those also suffering with alopecia this ones for you. I’m there to hold your hand through every step of the way, regardless of the good or bad days…

‘Things get put into perspective when you’re tested with challenges like this, but it is just a test and I’m hoping it’s the making of me. I’m thankful I’ve got this opportunity to show a raw/ real fight to whoever sees my posts… 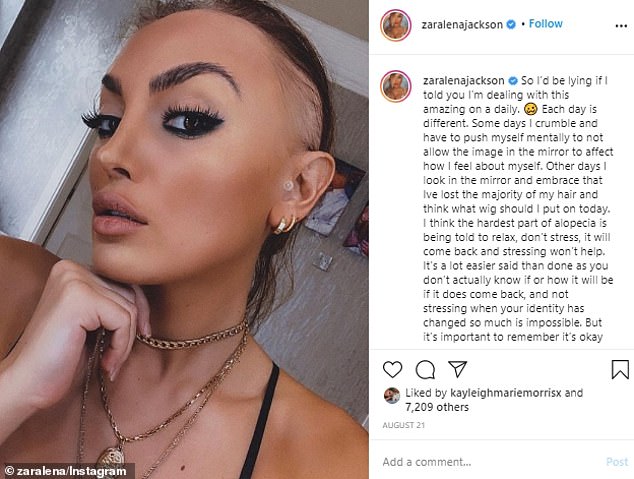 Pained: On August 21, ZaraLena shared a selfie showing the hair loss at the sides of her head and added a candid caption reading: ‘So I’d be lying if I told you I’m dealing with this amazing on a daily. Each day is different’

‘Because unfortunately we live in a world where the pressures to be something special are immense to a point where people hide their struggles and pretend life is perfect. It’s not. And that’s ok sometimes…

‘Hopefully a year from now I’ll look back and have not only thicker hair, but thicker skin too. Thank you so much to @thehairalchemistofficial for all your help and support, and to everyone for being there for me every step of the way…

‘I’ll never forget who’s been apart of this journey with me. Any negative comments will be deleted and blocked. Karma can deal with you.’

On August 21, ZaraLena shared a selfie showing the hair loss at the sides of her head and added a candid caption reading: ‘So I’d be lying if I told you I’m dealing with this amazing on a daily. Each day is different… 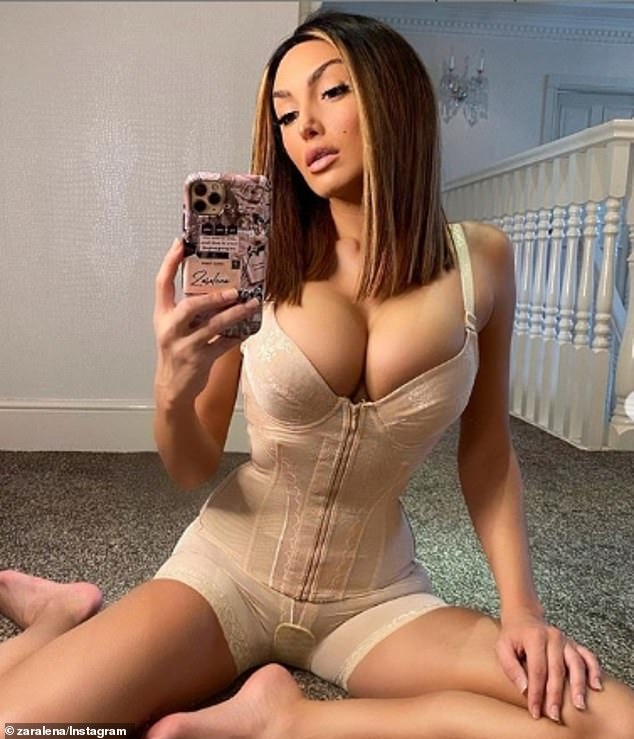 Open and honest: She revealed she has been favouring wigs of late 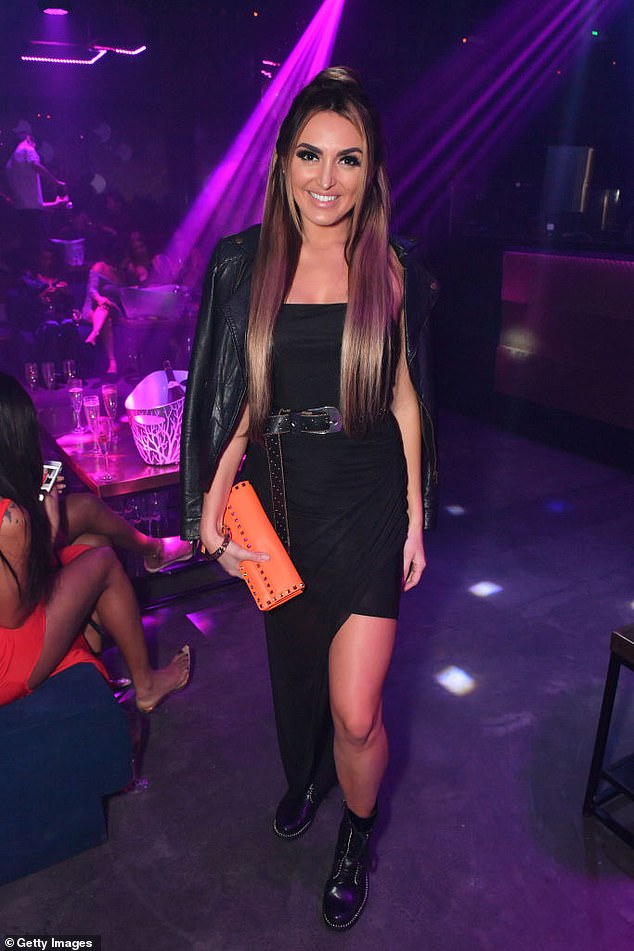 ‘Some days I crumble and have to push myself mentally to not allow the image in the mirror to affect how I feel about myself. Other days I look in the mirror and embrace that Ive lost the majority of my hair and think what wig should I put on today…

‘I think the hardest part of alopecia is being told to relax, don’t stress, it will come back and stressing won’t help…

‘It’s a lot easier said than done as you don’t actually know if or how it will be if it does come back, and not stressing when your identity has changed is impossible…

‘But it’s important to remember it’s okay to have down days, it’s okay to feel sorry for yourself sometimes as long as you then reflect on the positives and pick yourself back up. NO ONE is perfect, and imperfections are what makes us all unique whether that’s visible or not…

A vision: She was a regular of the party scene after her EOTB stint (pictured in August 2017)

‘As much as I want to spread a positive message I don’t want to disguise the difficulties of alopecia to make others question why they aren’t coping as well as I seem. I’ve hit highs of positivity but also major lows of rock bottom that I’d never thought my strong mind could able me to reach…

‘Almost like being on a rollercoaster that won’t stop. That is life sometimes, so if you’ve got alopecia and you are reading this, be kind to yourself, you’re doing amazing and every test happens for a reason wether short term or long term…

‘A huge thank you to all my socialites for sharing the awareness of my posts, it doesn’t go unnoticed  my daily pep talk ‘you’ve got your sight, sound, limbs, health, family, friends, support network, and much more to be grateful for.. this is not going to beat me’.

For support with alopecia and related issues, visit www.alopecia.org.uk

Alopecia, which causes baldness, is thought to be an autoimmune disorder. The immune system – the body’s defense system – turns on itself.

What are the symptoms?

‘Typically, one or more small bald patches, about the size of a 50p piece, appear on the scalp. The hair can start to regrow at one site, while another bald patch develops. Hair may also begin to thin all over the head,’ says Marilyn Sherlock, chairman of the Institute of Trichologists.

‘For some reason, the body’s immune system begins to attack its own hair follicles. Special white blood cells in the body, known as T-lymphocytes, cause the hair to stop growing,’ she adds.

Can worry make it worse?

Stress has been shown to prolong the problem.

Is it an inherited condition?

There is strong evidence to suggest that alopecia, like other auto-immune diseases, runs in families. About 25 per cent of patients have a family history of the disorder.

Alopecia areata usually affects teenagers and young adults, but it can affect people of any age. It is just as common among men as women.

Is there a cure?

There is no known cure, although there are various treatments which may be effective for some people.