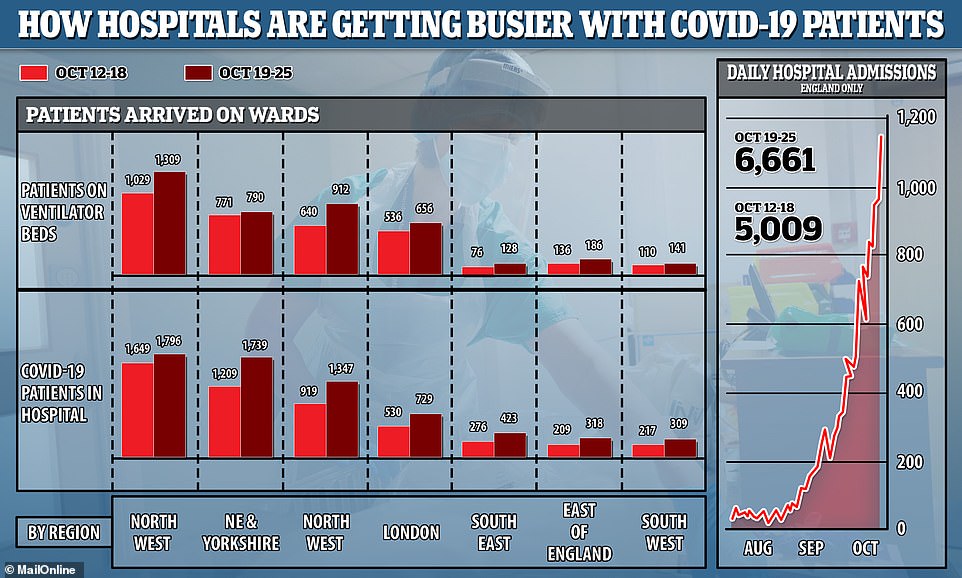 Almost 20 NHS trusts in England are already treating more coronavirus patients than at the peak of the first wave, according to official statistics that come amid warnings hospitals across the country could run out of beds before Christmas.

Trusts in hotspots such as Nottingham, Liverpool and Doncaster are seeing up to three times the number of Covid-19 patients compared to in mid-April, with five months of winter still to go.

But there is some reason to be optimistic, given that, overall, total beds occupied by Covid-19 sufferers across the country are still only half of what they were during the darkest days of the crisis in spring. Even in April, hospitals were not overwhelmed.

However, hospitals are filling up with infected patients quickly – spiking by about a third every week – and the fact several trusts have surpassed spring levels already will be a cause for concern so early into winter. As the country moves deeper into the colder months, people tend to get sicker from a slew of other illnesses and need care, which heaps even more pressure on hospitals.

MailOnline’s analysis of official NHS figures reveals 19 trusts are treating higher numbers of Covid-19 patients than at the first peak. They are mostly in Tier Three lockdown areas such as Nottinghamshire, Lancashire, Greater Manchester and Yorkshire. But even Tier Two towns, cities and boroughs in the North East, South West, East Yorkshire and the North Midlands are seeing significant rises.

Boris Johnson, who was infamously against lockdowns before the first peak in April, has been warned by his scientific advisers that every hospital in England is on track to be full with Covid-infected patients by December 17 unless he orders more shutdowns.

The Foreign Secretary Dominic Raab today hinted the Government could introduce a new Tier Four set of even stricter coronavirus restrictions as pressure mounts on Number 10 to thwart a deadly second peak. He refused to rule out another national lockdown, which has been seen in the likes of Germany and France.

SCROLL DOWN TO SEE HOW BUSY YOUR HOSPITAL IS

Doncaster and Bassetlaw Teaching Hospitals NHS Foundation Trust has three times as many infected patients on its wards now compared to April 12 – England’s busiest day in the pandemic. Just 67 beds were occupied by people with the disease then, compared to 201 on October 27, the most recent snapshot published by the NHS.

At Blackpool Teaching Hospitals NHS Foundation Trust, 196 of its beds were taken up by Covid-19 patients on October 27. It marked a 68 per cent jump compared to levels on April 12, when doctors there were treating 117 infected people.

There are 104 coronavirus sufferers currently being treated in Barnsley Hospital NHS Foundation Trust in South Yorkshire, according to the most recent snapshot from NHS England. This is compared to 63 six months ago, marking a rise of almost two-thirds.

WHERE ARE THE 19 TRUSTS? AND HOW DO LEVELS COMPARE TO APRIL?

East Lancashire Hospitals NHS Trust currently has 170 people with Covid-19 on its ward compared to 122 in spring, a rise of nearly 40 per cent. A similar story has played out at Nottingham University Hospitals NHS Trust, where patient levels have risen from 210 to 289 (38 per cent).

Meanwhile, in Tier Two lockdown areas there have been similar surges in the number of beds occupied by Covid-19 sufferers. Hull University Teaching Hospitals NHS Trust, in East Yorkshire, has 54 infected patients, up from 44 six months ago, a rise of 23 per cent.

University Hospitals of North Midlands NHS Trust has 171 infected people on its wards, up more than a quarter from April 12, when there were 124.

Torbay and South Devon NHS Foundation Trust in the South West has technically seen a surge of 44 per cent, though it has far fewer beds than some of the bigger trusts in major cities. As of yesterday it was treating 33 Covid-19 patients compared to 23 on April 12.

The caveat with these figures is that they only go up to October 27, meaning there is no way to tell how many patients have been discharged since Wednesday. But it is not expected to have changed significantly.

Covid-19 hospital admissions lag by around two to three weeks because of a delay in the time it takes for someone to fall ill enough with the virus to need care – so there is also a chance they have continued to rise.

Since October 20, when MailOnline last analysed these NHS figures, there has been a 38 per cent rise in the total number of coronavirus-infected patients occupying hospital beds across England. Seven days ago there were 6,055 patients, compared to 8,337 on October 27.

The number of patients hooked up to mechanical ventilators also rose 25 per cent in the same time frame, jumping from 3,298 to 4,122.

Figures like these will be used as evidence for more lockdowns. SAGE, the Government’s Scientific Advisory Group for Emergencies, has told the PM hospitals could be completely overrun by December unless the virus’ current trajectory can be curtailed.

However, the silver lining is that, overall, total beds occupied by Covid-19 sufferers across the country are less than half of what they were during the darkest days of the crisis on April 12, when the figure was 18,970.

Even at the peak of the first wave, only a quarter of all of England’s hospital beds were occupied by coronavirus patients, on average.

Latest figures suggest the country has about 110,000 beds at its disposal, plus thousands more in the Nightingale hospitals built during the first wave which went unused.

Thousands of private beds were also commandeered to give the NHS some breathing room if it’s faced with a surge in Covid-19 admissions.

Yet sources insisted today that more lockdowns were needed or else every hospital in England will be full by December 17.

A well-placed source said: ‘Ministers have been told in clear terms that if no further action is taken, at the present rate of rising infections, every hospital bed in England will be full by December 17.

‘They would have no choice but to turn people away, including additional Covid patients, people who have heart attacks, cancer, road accident victims – because there would be no beds to put them in or staff to treat them.

‘There could be a repeat here of the scenes in Lombardy in Italy at the start of the pandemic: the sick put in operating rooms or corridors.

‘Hospital admissions are forecast to go up slowly for the next few weeks but shoot up towards Christmas. People don’t realise that social distancing measures can mean only ten beds in a ward meant to take 20.

‘And there is a finite number of trained ICU [intensive care unit] staff – you cannot do it without special training.’

Hospitals could run out of beds by December 17

Boris Johnson has been told that every hospital in England will be full by December 17 unless he orders more lockdowns.

The blunt warning emerged a day after a leaked Sage committee document revealed that ministers had been told to prepare for a ‘worst case scenario’ of 85,000 deaths.

Last night, a Downing Street source confirmed the Government had been advised that hospitals in England could run out of beds by Christmas but declined to give a precise date.

Government insiders insist there is evidence that NHS beds in cities like Liverpool, which are already in Tier Three lockdown, are already running out.

However Mr Johnson is under pressure from powerful groups who are demanding he resist any new nationwide measures.

Tory MPs in the so-called ‘Red Wall’ Northern seats claim their lockdowns are not working and are unfair.

‘Some medical experts claim lockdowns will lead to more deaths among people with cancer and other serious illnesses.

Despite a mid-September surge in infections, Britain’s hospitals enjoyed low hospital and death rates because transmission was being driven by young people who are resistant to Covid-19’s most severe symptoms.

But the rise in hospital admissions is a stark reminder the disease is now rife among older demographics, who are vulnerable to falling seriously unwell.

A Public Health England report published on Thursday suggested the problem could accelerate in the coming weeks because infections among over-70s and over-80s, who are the most at-risk groups, are rising by a quarter a week.

The East of England – which has also so far escaped stricter curbs – recorded the second largest spike in hospital admissions, up 52 per cent from 209 to 318, and the third highest spike in ventilator use, up 37 per cent from 136 to 186.

In the North West – where 9million people are under the harshest restrictions in England, hospital admissions rose by the lowest rate in England, at nine per cent.

But they still accounted for the largest number of admissions across the UK nation. NHS England data shows they rose from 1,649 to 1,796.

Considering Covid-19 patients on ventilators, figures showed they also had the highest number in England – at 1,309.

In the North East, which has also been under stricter measures due to surging infections, hospitals struggled against the fourth highest rise in admissions, by 44 per cent, but had the lowest rise in the number of patients on ventilators, by two per cent.

Nonetheless, their total number of patients needing the machines is the third highest in England.