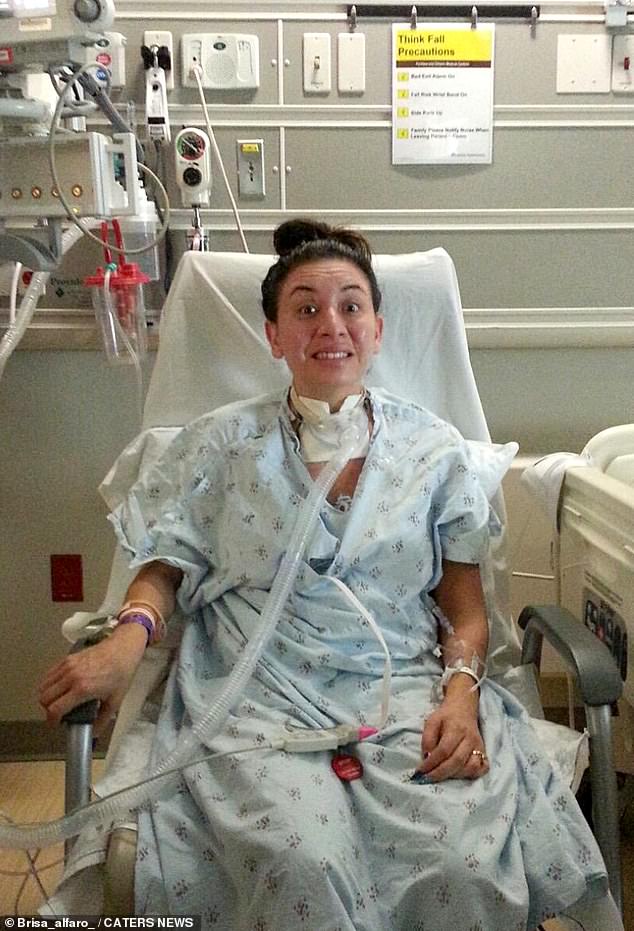 A former cosmetologist has defied one per cent odds of walking again after recovering from being locked in her own body.

Brisa Alfaro, 39, was flying from her home in Southern California to a trade show in New York when she thought she suffered from what she thought was an allergic reaction.

But after rushing to hospital, doctors told Brisa, who was fit and healthy, was in fact suffering from a stroke.

Brisa Alfaro, 39, was flying from her home in Southern California to a trade show in New York when she thought she suffered from what she thought was an allergic reaction. She is pictured in hospital 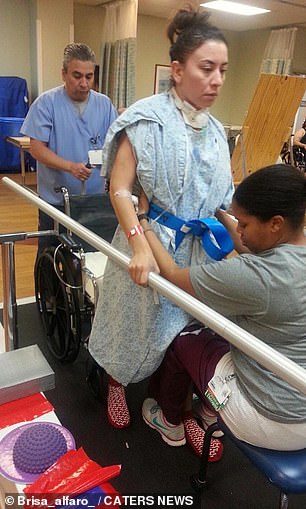 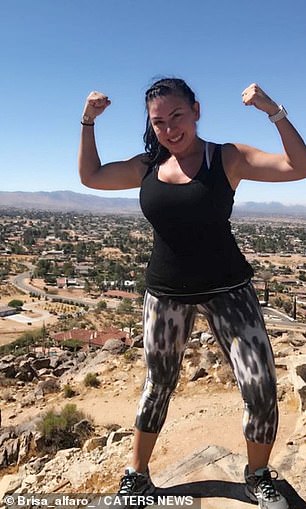 After rushing to hospital, doctors told Brisa, who was fit and healthy, was in fact suffering from a stroke (pictured left) but she has now fully recovered and can walk again (right)

She said: ‘I suddenly started feeling really unwell on my way to work and I thought I was having an allergic reaction to something I had eaten.

‘My face went extremely swollen, it was like I had been in a boxing match, and it just was not going down.

WHAT IS LOCKED IN SYNDROME?

Locked-in syndrome is a rare brain disorder that causes complete paralysis of all voluntary muscles except the ones that control eye movements.

Sufferers are conscious but cannot speak or move. Their cognitive function is usually affected.

The syndrome is caused by damage to the brainstem that contains nerves that transmit information to other parts of the body.

Such damage usually occurs due to a lack of blood flow or bleeding following trauma.

Patients are unable to chew, swallow, speak or move, aside from their eyes, however, they can see and hear.

Most sufferers are bedridden and dependent on their carers.

Treatment focuses on relieving the underlying disorder, such as bleeding, if possible.

Patients may need tubes to help them breathe.

Small tubes are also inserted in their stomachs for eating and drinking.

Sufferers can be taught to communicate via their eyes.

‘So I went to the hospital just to be safe, and that is where I suffered my stroke.

‘The next thing I remember is being in the emergency room, I was trying to talk to the doctors and I thought they were completely ignoring me.

‘I began screaming and yelling because I was getting so frustrated that no one was communicating with me.

‘But they were not ignoring me at all, I was already locked in. The screaming and yelling were not even happening.’

She then spent the next three weeks unable to move as she developed ‘locked in syndrome’.

The doctors called Brisa’s family and told them they needed to make their way to the hospital in New York from California due to the severity of her condition, meaning her mother did not know if she was coming to say goodbye to her daughter.

‘The doctors told my family that I had a less than one per cent chance of mobility and ever living a normal life again,’ Brisa explained.

‘They said there are less than five cases of locked-in syndrome per year worldwide, and not many survive, and if they do they are paralysed from the neck down and can really only move their eyes.

She was also unable to eat or breathe on her own, and had to be fitted with a breathing and feeding tubes to survive.

Brisa added: ‘When all of my family started to arrive at the hospital to see me it was a very frustrating time. I was trying so hard to communicate with them and tell them not to worry and that I was fine, but they could not hear me.

‘It was a very surreal experience, I was confined to my own body.

‘Throughout the entire time I was locked in my mom did not leave my side, she would play me music and tell me stories from my childhood and speak to me about all of my goals in life, she never let negativity entire my mind.

‘I believe that the key thing that my mom did, which I think played a huge part in my recovery, was playing me the audiobook of The Secret, which is about the law of attraction and growth.

‘As a result of this, I used my thoughts, because thoughts were all I had, to focus on healing and walking out of the hospital. I thought of nothing else other than complete healing and showing the people around me a sign. 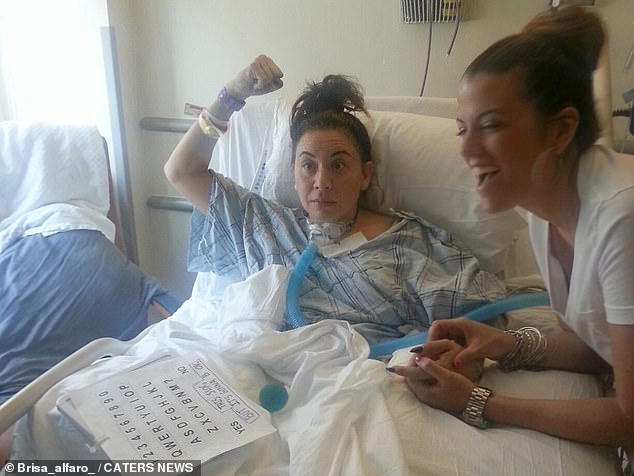 ‘One day my mom was talking to me and asked me to show her a sign. I used everything I had and managed to flicker my pinky.

‘My mom ran to the doctors to tell them, then came over and held my hand and asked me to show a sign again.

‘I was so exhausted from working so hard to move my pinky for my mom, and now I had to do it again.

‘It took me a little while longer but I managed to do it again. The whole room erupted, it was like being at a football game, everyone was so emotional. 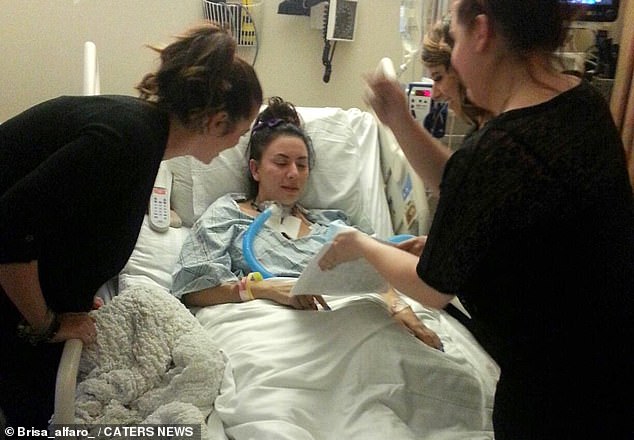 Brisa was also unable to eat or breathe on her own, and had to be fitted with a breathing and feeding tubes to survive. She is pictured learning to communicate

‘From that point, it went from moving my pinky, to my arm, to moving the right side of my body and then to being able to sit up in bed and then move into a wheelchair.’

Brisa says that even her slight movements did not convince doctors that she would make a full recovery.

She added: ‘At every milestone, the doctors said that this was as good as it is going to get, but I was stubborn and determined and I knew I was going to get better. 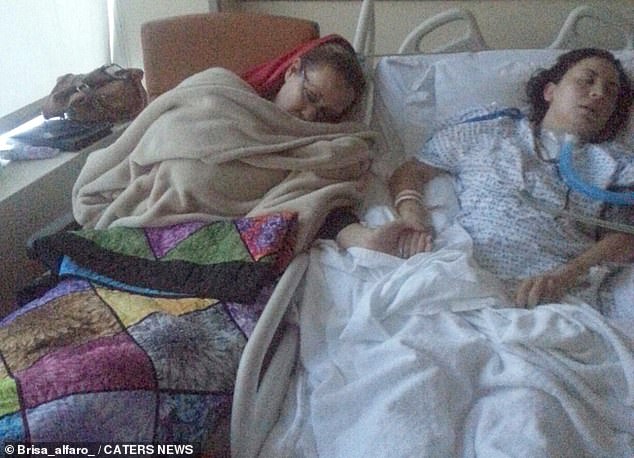 ‘I have spent the last seven years recovering, it did not happen overnight. I am still recovering now as I suffer from short term memory loss. I had to relearn everything, I had to learn how to walk again and how to eat.

‘But I am now able to live a normal life, and use my own experiences to coach and guide others through their journey and give them hope. I have been able to help so many others who have been going through their own nightmare. It has been an incredible journey.’

Brisa has a book coming out this winter, ‘Limitless: Small moves to your greatest life after a paralysing stroke’. 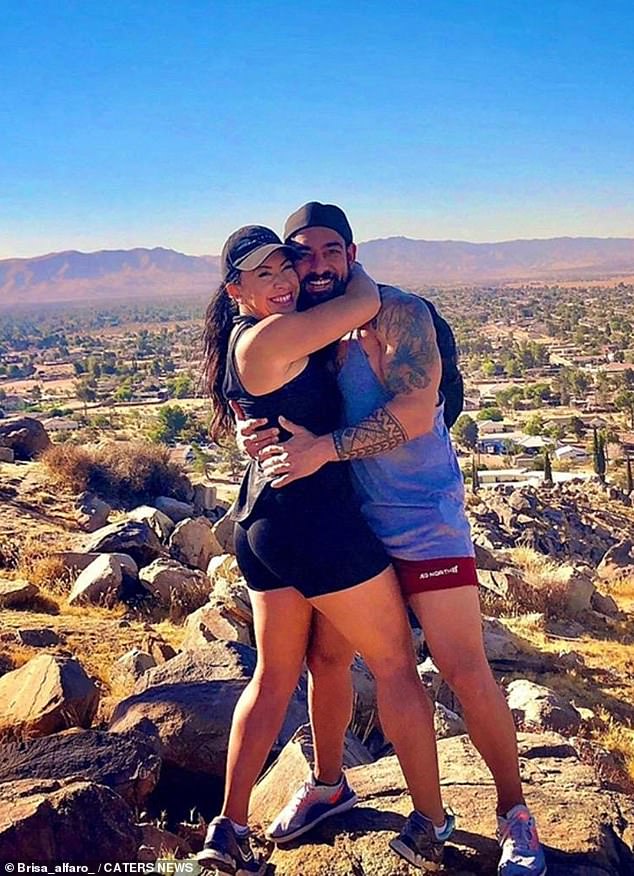 Brisa with her partner Jason on a hike. She can now walk long distances despite being told she could never walk again