Tributes have flooded in to the man who was the ‘heart and soul’ of the England team and was also part of the Manchester United side which became the first English club to win the European Cup two years later.

In a statement, his family said: ‘The Stiles family are sad to announce that Nobby Stiles passed away peacefully today (30/10/2020) surrounded by his family after a long illness.

‘The family kindly ask for privacy at this sad time.’

England 1966 hero Nobby Stiles (pictured with his World Cup winners medal during a photocall at the Premier Inn Hotel in Old Trafford, Manchester) has died aged 78 today after a long battle with Alzheimer’s disease 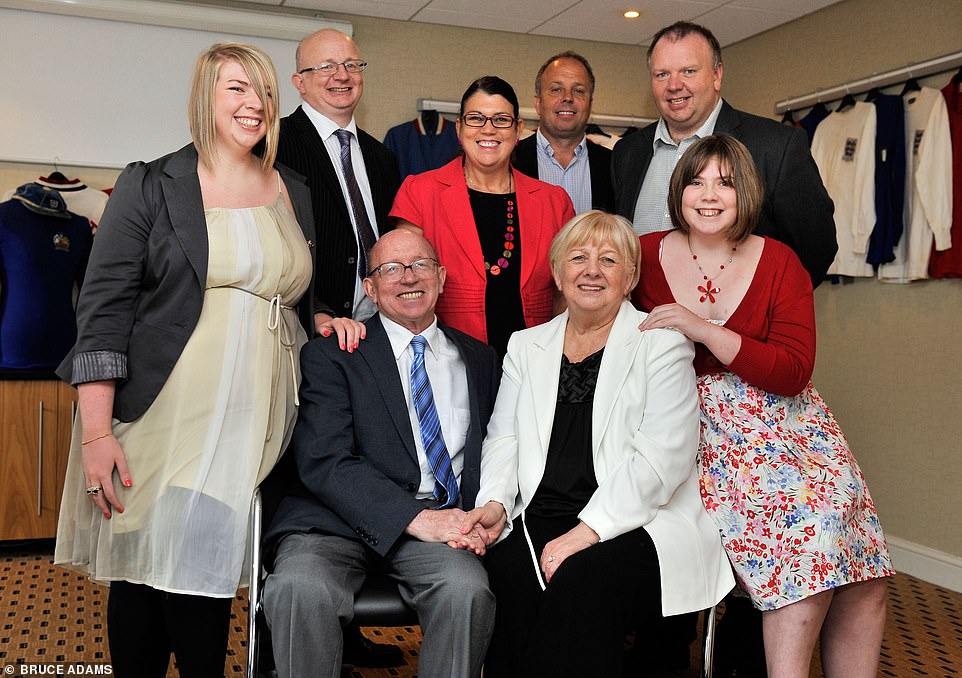 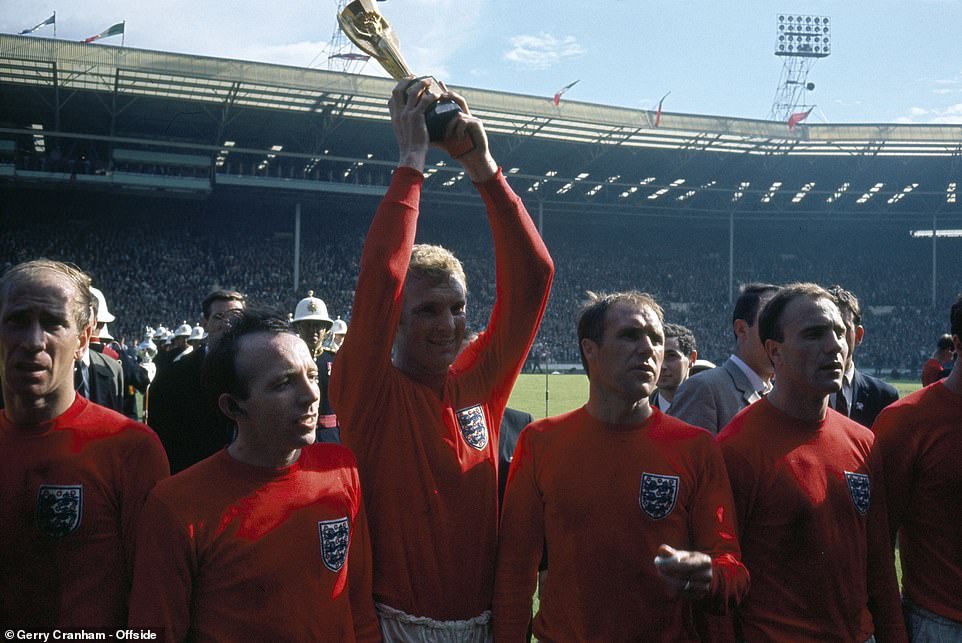 Tributes have flooded in to the man who was the ‘heart and soul’ of the England team that won the World Cup against West Germany (pictured). Pictured left to right: Jack Charlton, Nobby Stiles, Bobby Moore, Ray Wilson and George Cohen 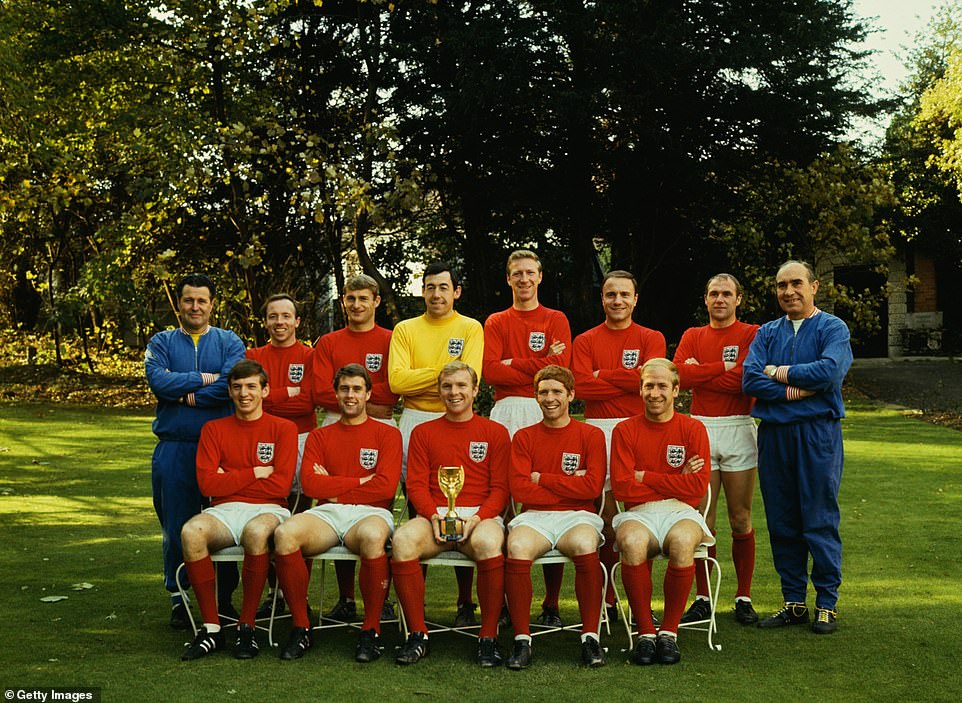 Stiles was born in a cellar at his family home in Collyhurst, north Manchester, during an air raid on May 18, 1942 and grew up in the working class neighbourhood.

His father Charlie was the manager of the family’s undertakers’ parlour business and his mother Kitty worked as a machinist.

He went to St Patrick’s Catholic Primary School before his sporting talent was spotted as a 15-year-old school boy by Manchester United.

Stiles agreed apprentice terms with United in 1959, at a time when the club was still recovering from the Munich air disaster a year earlier in which eight players were killed. 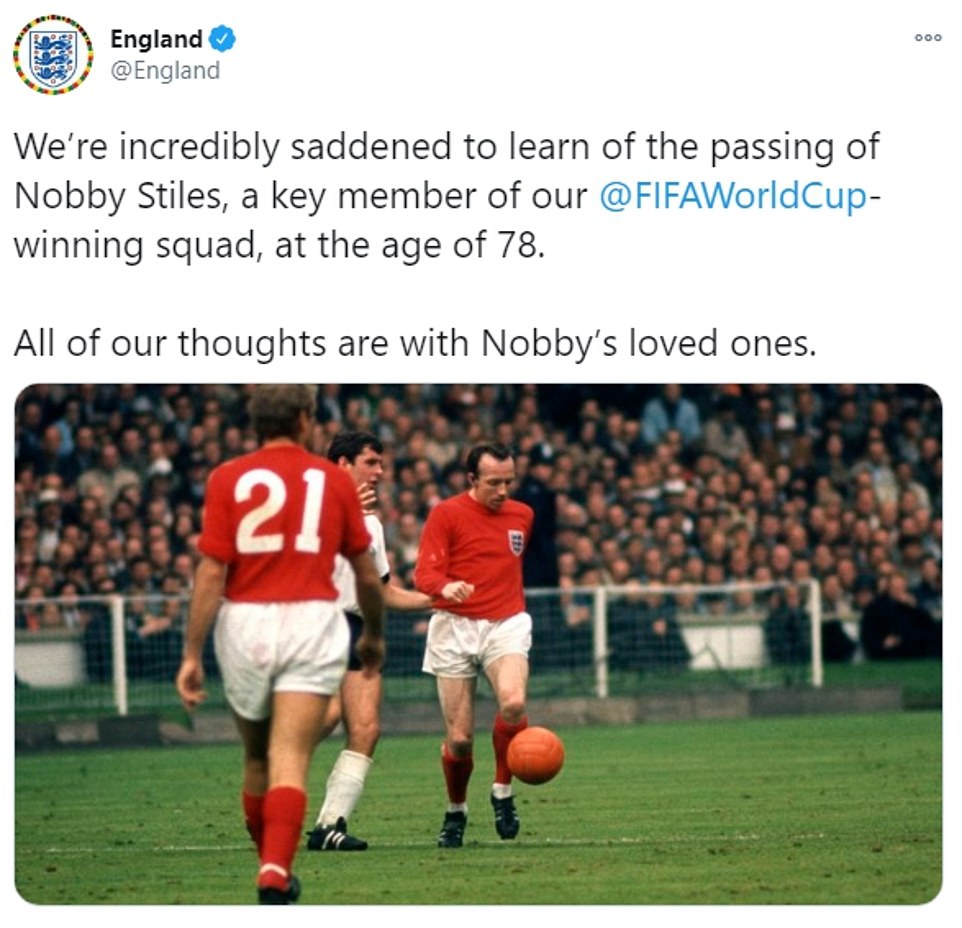 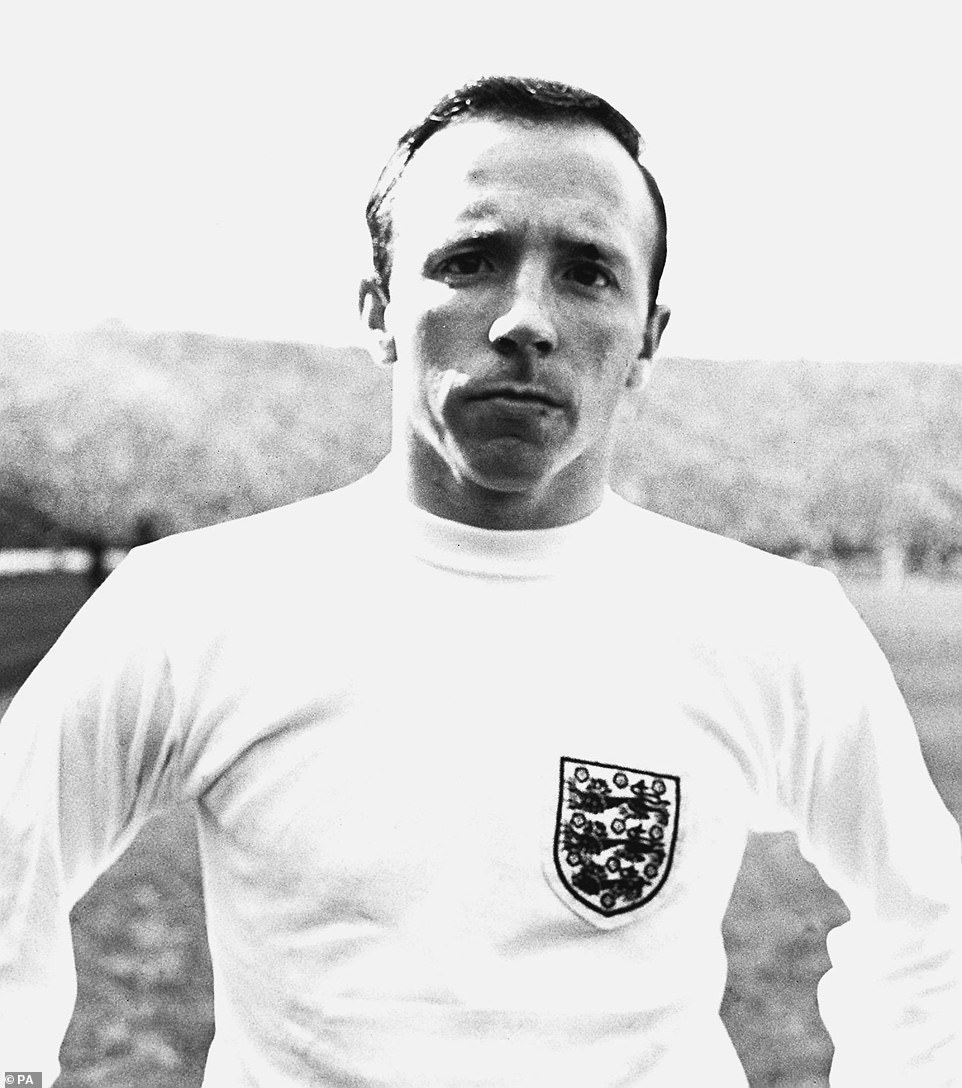 The short holding midfielder was given his debut by Sir Matt Busby the following year and became a recognisable figure on the field due to his missing front teeth – revealed when he took his dentures out before games – and dramatic combover.

He married his childhood sweetheart Kay, sister of former Republic of International Johnny Giles, in 1961 and they went on to have three sons together: Peter, John and Robert.

The ‘toothless tiger’ went on to win the First Division title in 1965 before winning the World Cup with England the following year and European Cup with United in 1968.

He will perhaps be remembered most for his dance while holding the World Cup trophy after the final, but few would question his striking influence both on and off the field in the lead up to England’s victory. 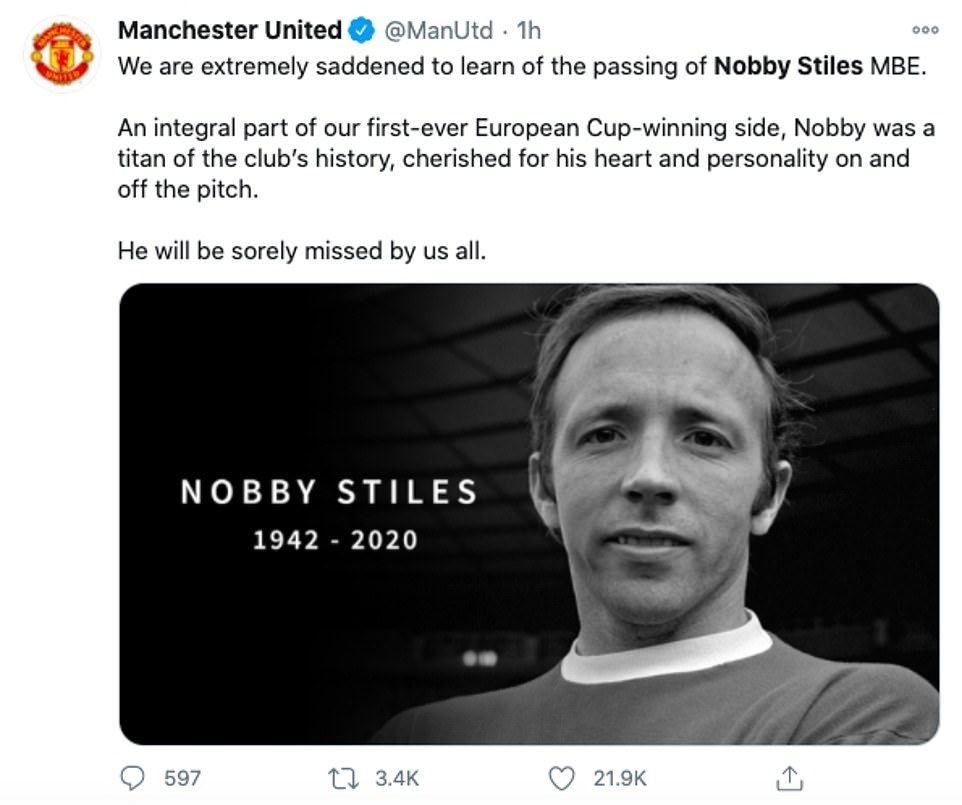 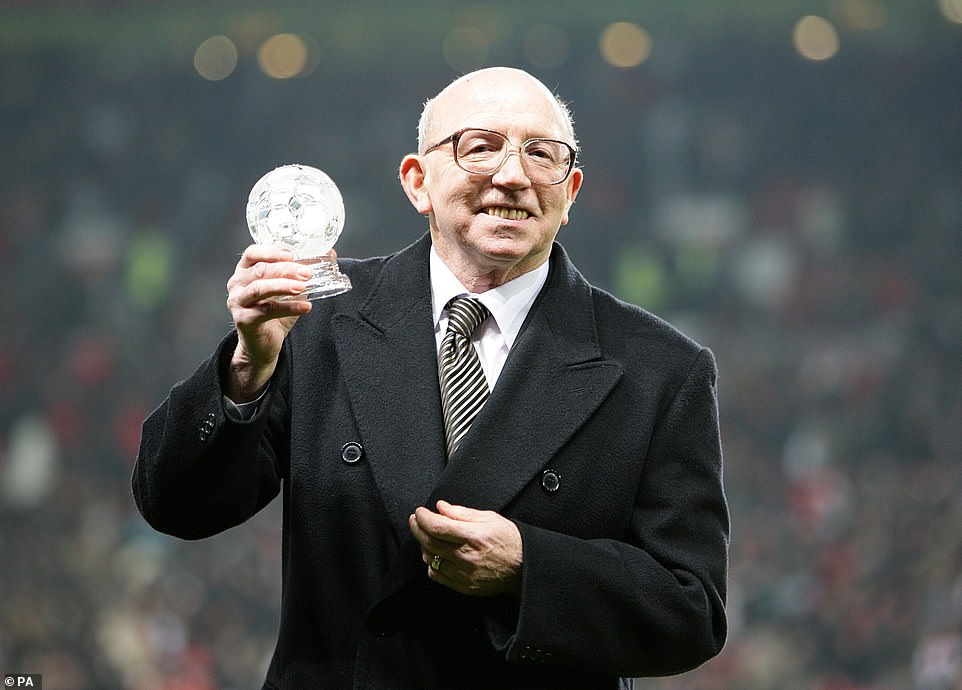 Stiles won league titles with the Red Devils in 1965 and 1967, before their 1968 European success 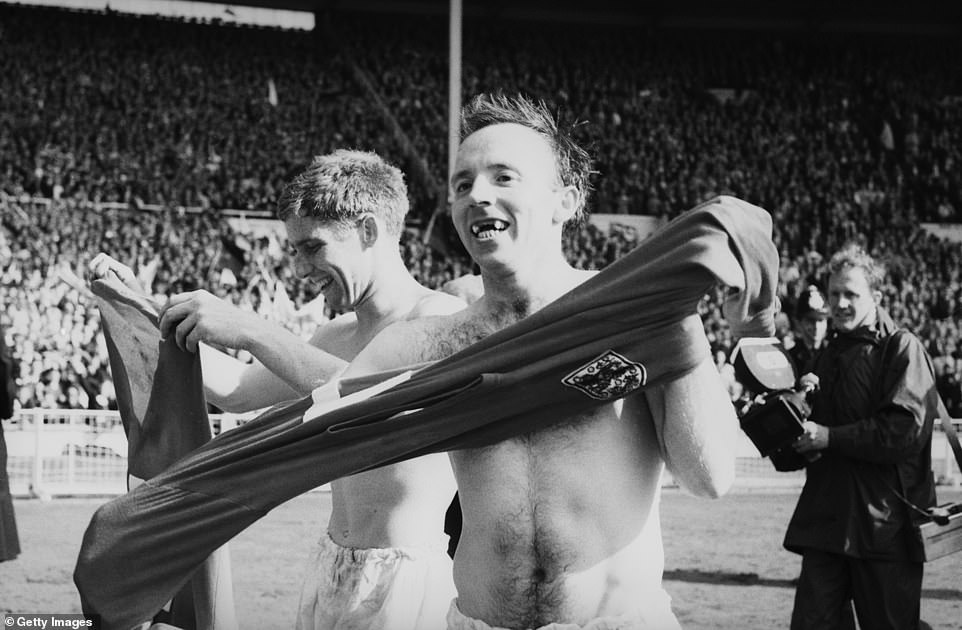 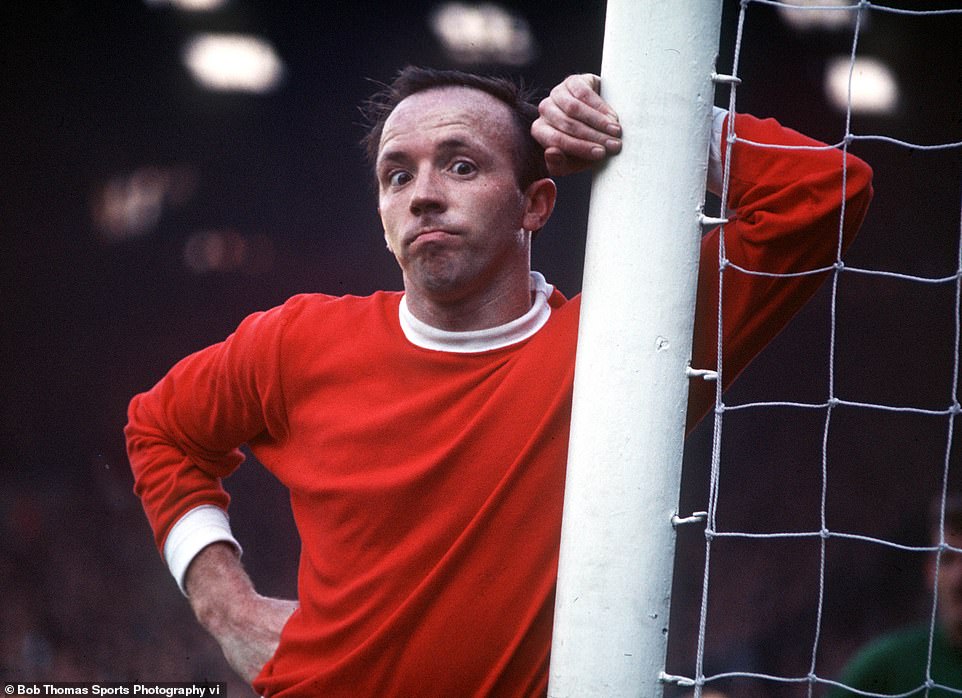 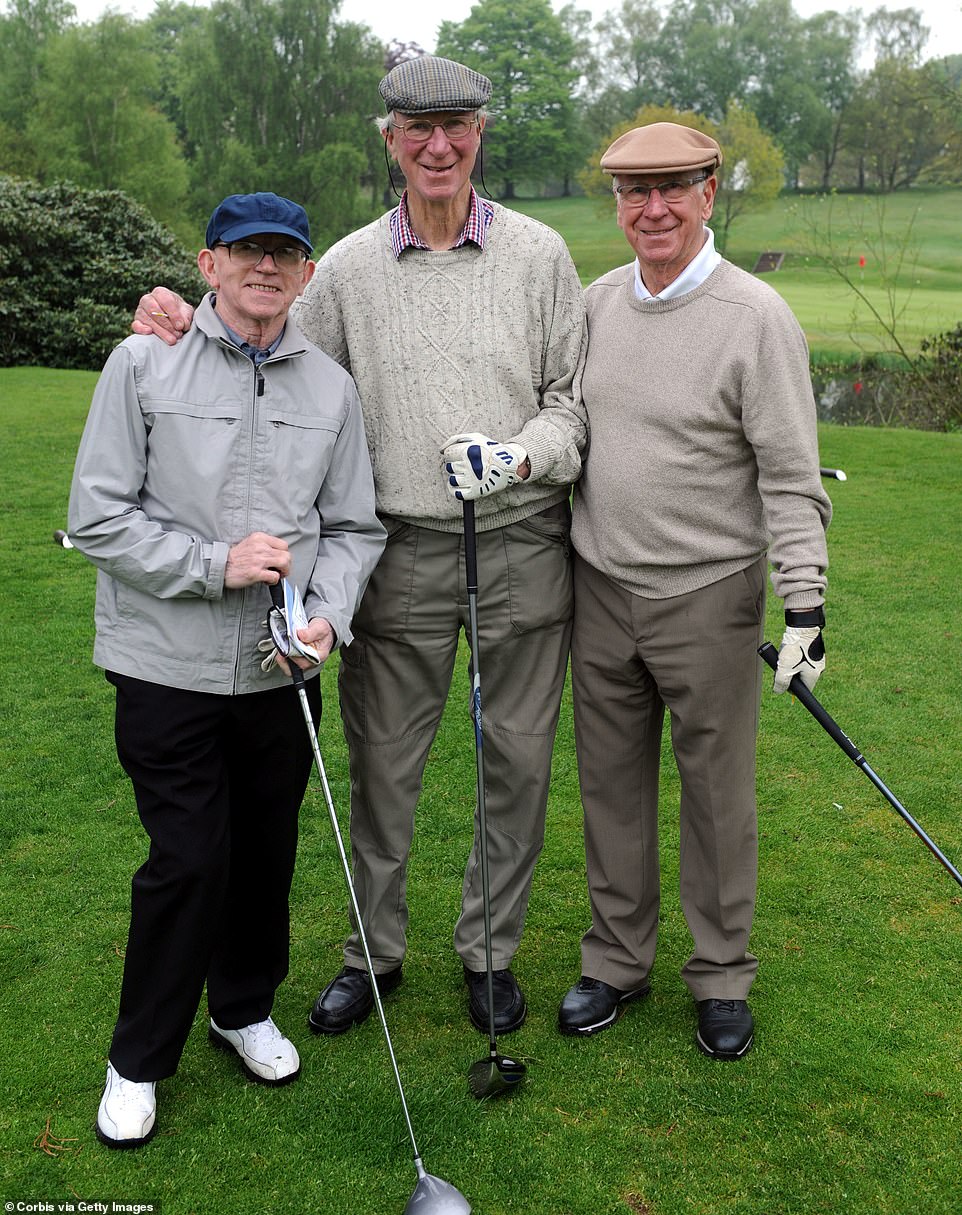 Speaking in 2002, Stiles told the Guardian: ‘It’s still the biggest thing that happened to me. Everyone still wants a piece of you because of it.

‘To be fair, I’m not as busy as some of the other lads. But wherever you go, what you did means so much to people. Not just lads of my age, you’d expect that.

‘But kids of me grandkids’ age, they come up to me and go: “Hey, you, you’re the fella with no teeth who danced round Wembley, aren’t you?” In a way, you end up belonging to everyone.’

After stints at Middlesborough and Preston North End, Stiles retired from playing in 1975. 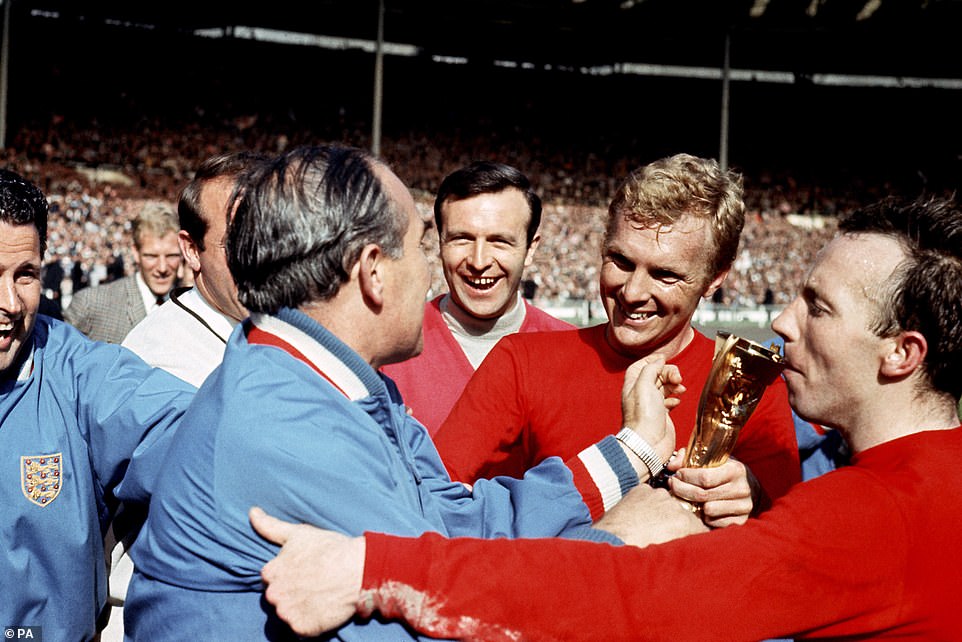 He is the seventh member of the England team that started the final to pass away, following the likes of captain Bobby Moore 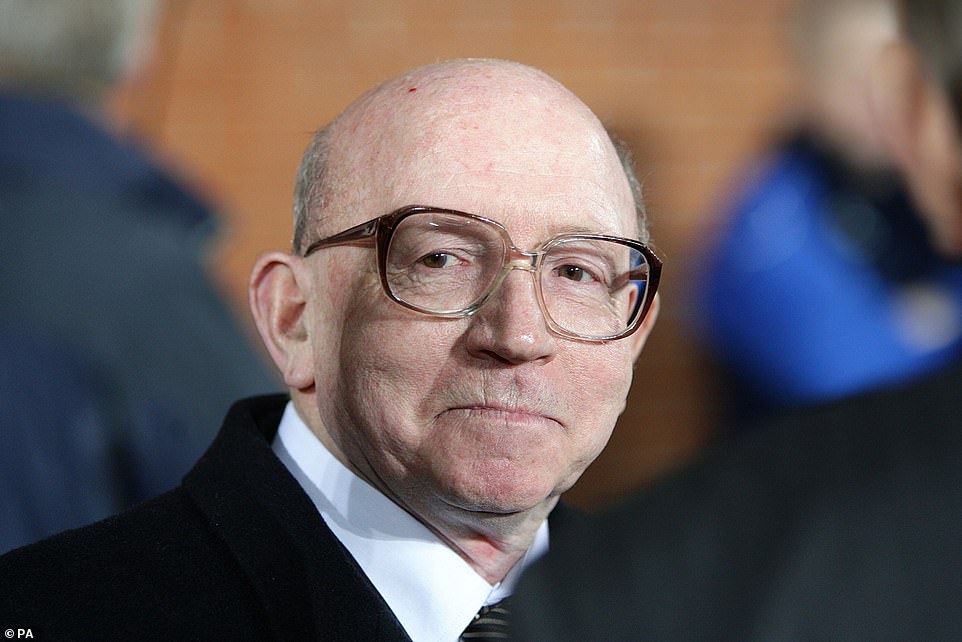 Stiles left United in 1971, going on to play for Middlesbrough and Preston in his career. He earned 28 England caps and made 392 appearances for Manchester United

He later managed Preston between 1977 and 1981, before coaching Canadian side Vancouver Whitecaps and then West Brom between 1985 and 1986.

He returned to United as a youth team coach under Sir Alex Ferguson in 1989 for a four-year stint.

Stiles sold his medals and football memorabilia to raise money for his family, like many of his England team mates.

Stiles suffered a mini stroke the same year aged 68 and was diagnosed with prostate cancer in 2013. 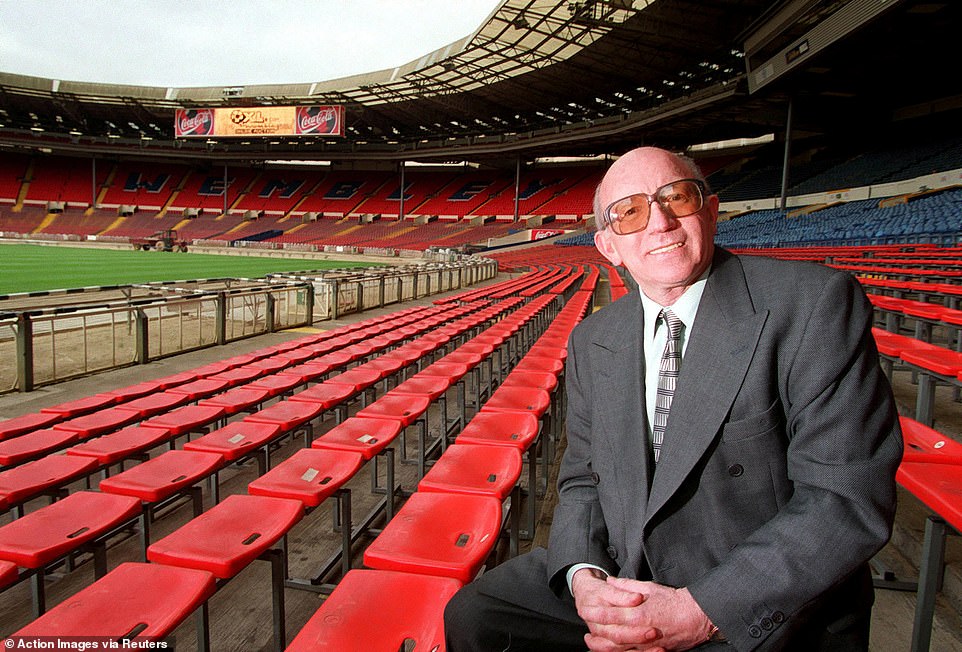 Nobby Stiles sits in the stands at Wembley, as QXL launch the ‘end of an era’ auctions on May 17, 2000 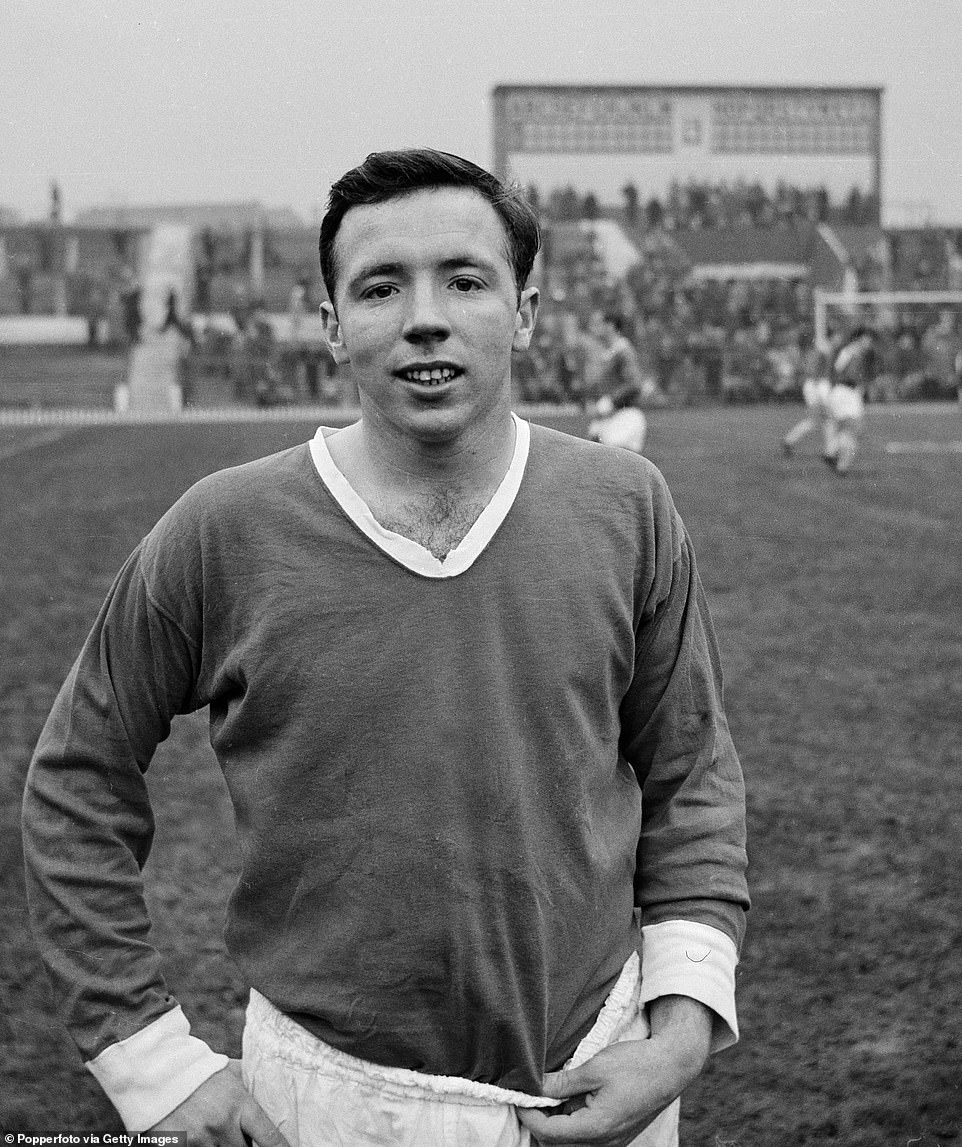 His later years were increasingly characterised by his struggles with Alzheimer’s disease and vascular dementia, as he began to lose his speech.

Stiles’s family were critical of the lack of support he received and argued the Professional Footballers’ Association should have completed research into the link between heading a football and degenerative brain disease during his lifetime.

He was made an MBE in 2000, joining fellow 1966 finalists Alan Ball, Roger Hunt, Ray Wilson and George Cohen, and a road was named after him in Collyhurst in May 2016.

Gary Lineker led tributes to Stiles, posting on Twitter: ‘Saddened to hear that Nobby Stiles has passed away.

‘Another of our 1966 World Cup winning heroes leaves us. He had a heart that was even bigger than the gap in his teeth. RIP Nobby.’ 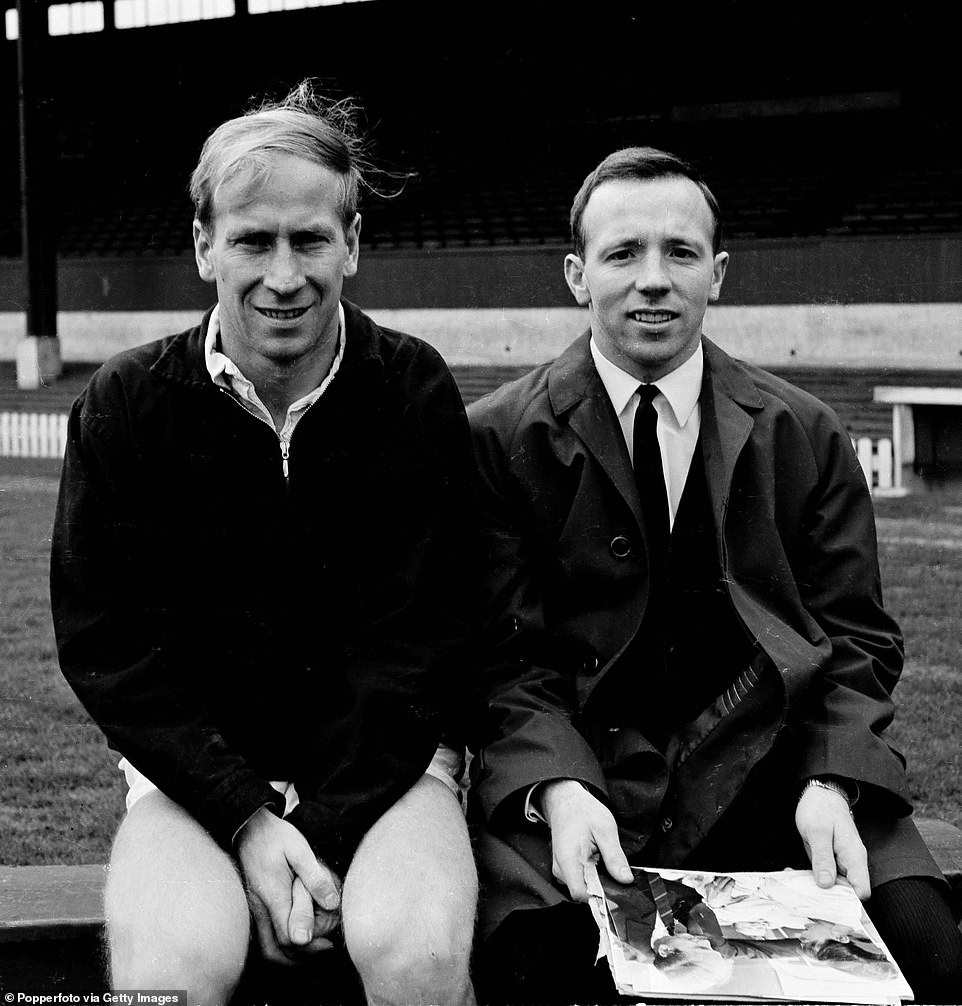 He was made an MBE in 2000, joining fellow 1966 finalists Alan Ball, Roger Hunt, Ray Wilson and George Cohen, and a road was named after him in Collyhurst in May 2016. Pictured: Nobby (right) sits with Manchester United and England teammate Sir Bobby Charlton 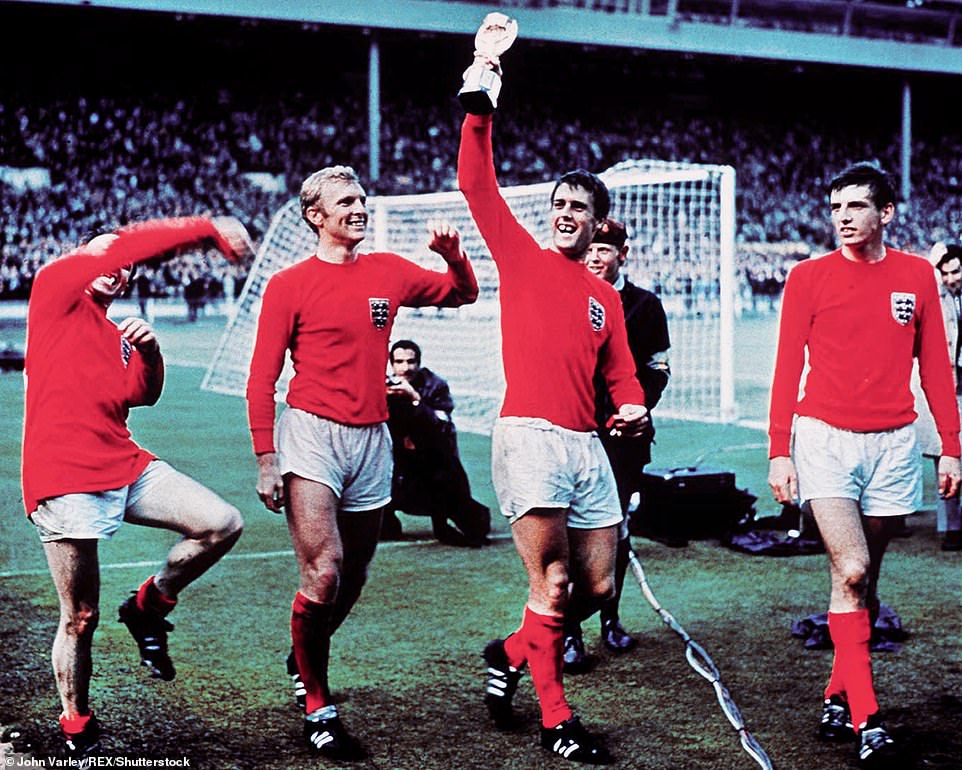 Sportsmail’s Chris Sutton also paid tribute to the World Cup winner and urged the game to do more to help the fight against Alzeheimer’s.

‘Such sad news about Nobby Stiles. A World Cup winner and one of the games great characters lost to Alzheimer’s,’ he wrote.

‘Thoughts go out to the Stiles family. Eventually football will wake up show some real urgency in the fight against Dementia and Alzheimer’s.’

England also tweeted their condolences in a post which read: ‘We’re incredibly saddened to learn of the passing of Nobby Stiles, a key member of our @FIFAWorldCup-winning squad, at the age of 78.

‘All of our thoughts are with Nobby’s loved ones.’ 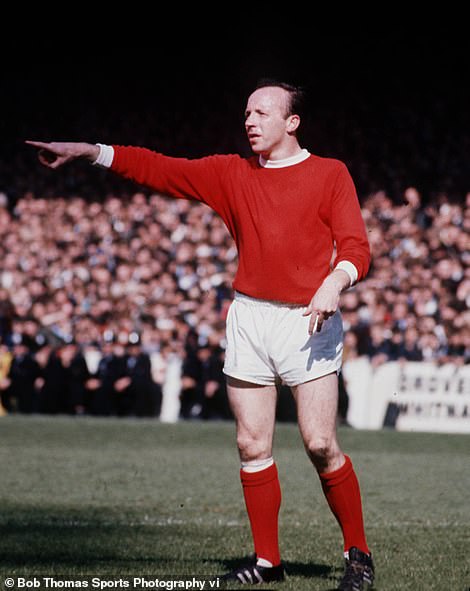 Former Liverpool and Republic of Ireland defender Mark Lawrenson also paid his respects to a man he said helped him once he had broken into the Preston first team in 1974.

‘Terrible news re Nobby Stiles..He more than anyone made me into a Player at PNE,’ he said.

‘Absolute Gentleman as well…Love to the family…Very Sad day….’

Sir Geoff Hurst, who scored a hat-trick in the 1966 final, added: ‘Hugely sad to hear Nobby has passed away.

‘We were playing together way back for the U17s, U23s, and of course, for England, in fact, it was my first cap when Nobby scored, I think he was wearing No. 9!

‘Great character, and the heart and soul of the team, he will be sorely missed.’

Man United also posted a message of condolence, writing: ‘We are extremely saddened to learn of the passing of Nobby Stiles MBE.

‘An integral part of our first-ever European Cup-winning side, Nobby was a titan of the club’s history, cherished for his heart and personality on and off the pitch.

‘He will be sorely missed by us all.’

Former United and England defender Gary Neville also paid his respects and said he showed the way with how to represent the Reds.

‘Rest in Peace Nobby. Thank you for all you did for us. You taught us how to fight for everything in that red shirt .

‘Your studs are your best friends out there.’

‘As a 16-year-old boy at Manchester United, it was a privilege to be coached by a legend of the game and a true gentleman,’ wrote Robbie Savage.

Another United legend Peter Schmeichel said: ‘Really sad news that @ManUtd legend Nobby Styles has passed away. A great hero and an inspiration for all United fans.’ 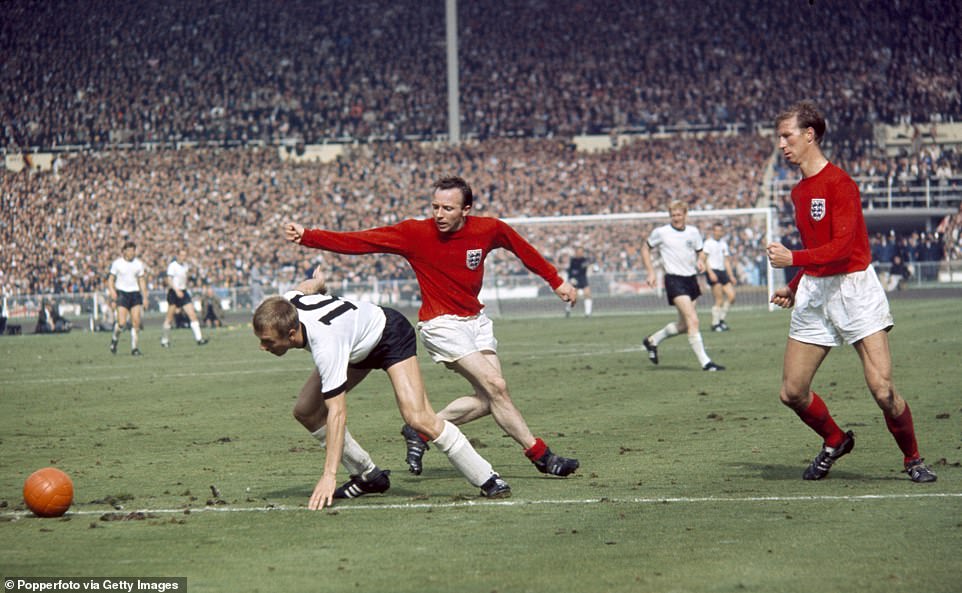 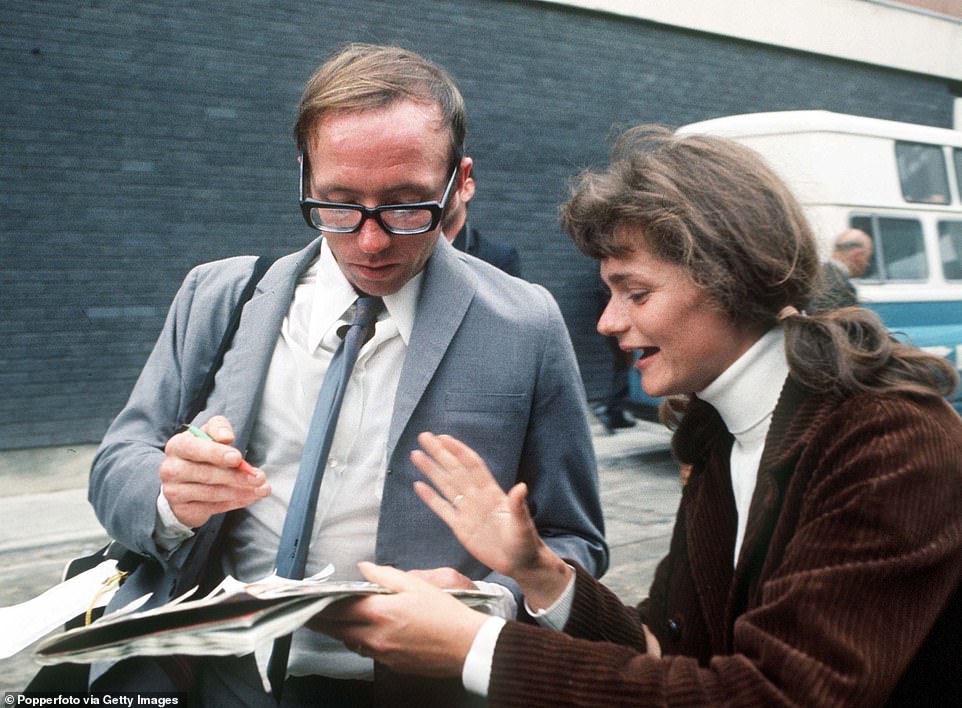 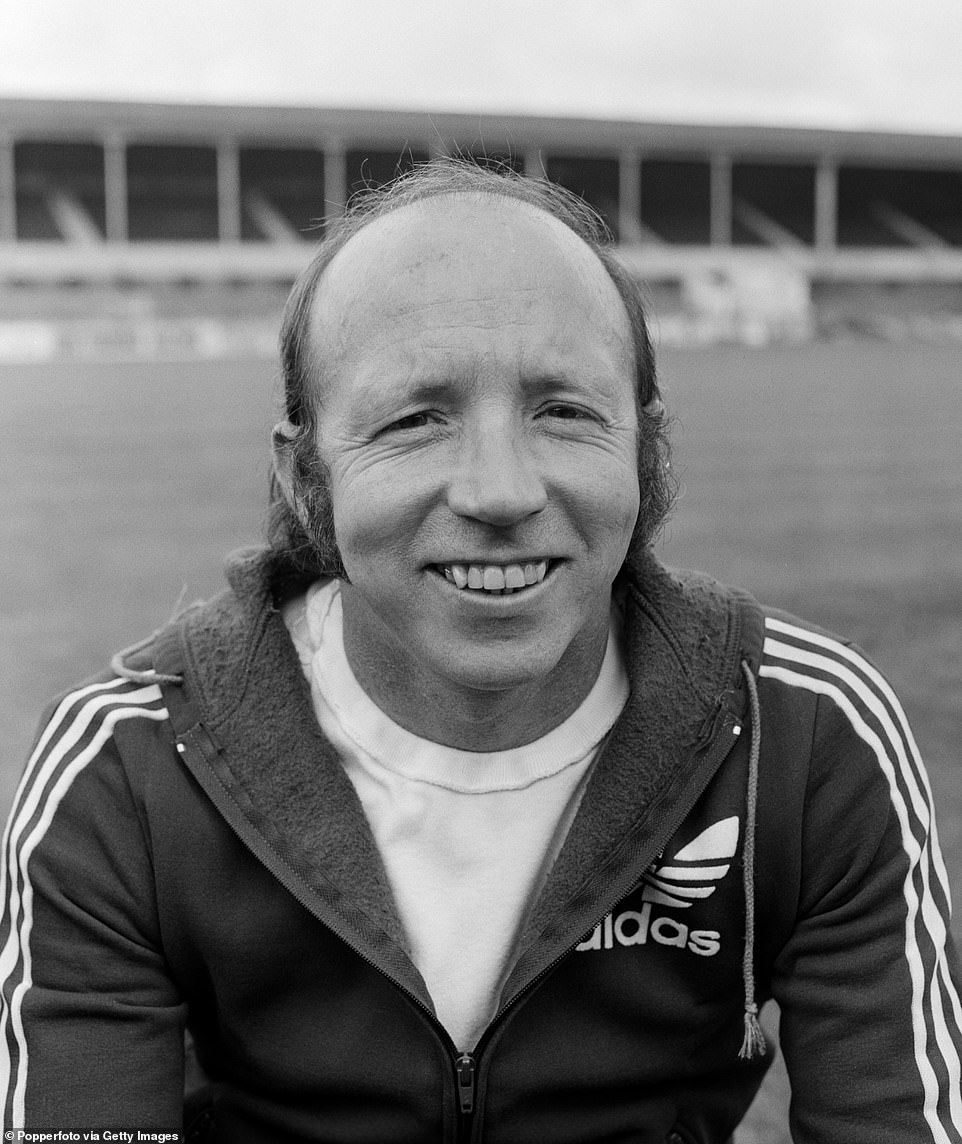 Stiles (pictured in 1980) later managed Preston between 1977 and 1981, before coaching Canadian side Vancouver Whitecaps and then West Brom between 1985 and 1986

Wayne Rooney wrote: ‘Sad news. Thoughts with all the family and friends of legend Nobby Stiles.’

‘It was an honour to be tutored in my early years at Man Utd by, not only a colossus for both club and country, but a gentleman of the highest order. God bless Nobby and to the family you leave behind.’

Manchester City said: ‘From across town, we’re sending our thoughts and condolences to the family and friends of Nobby Stiles.’

Arsenal football club wrote: ‘ When he danced, the country danced with him. Rest in peace, Nobby Stiles MBE. Our thoughts are with his family, friends and all those who adored him.’

Stiles was credited with playing a key role in neutralising the threat of Portuguese star Eusebio in the World Cup semi-final.

He is the seventh member of the England team that started the final to pass away, following captain Bobby Moore, Ray Wilson, Alan Ball, Martin Peters, Jack Charlton and Gordon Banks.

He is survived by his wife, Kay, his childhood sweetheart, and their three sons Peter, John and Robert. 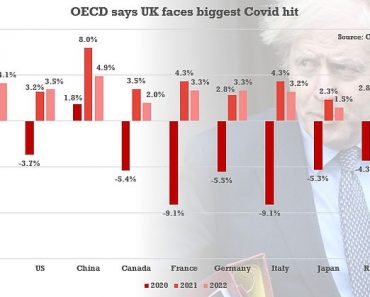 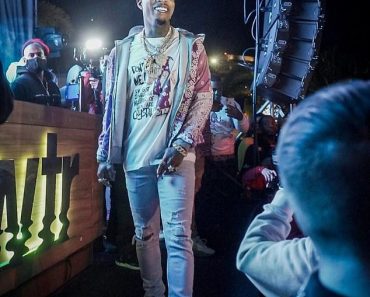 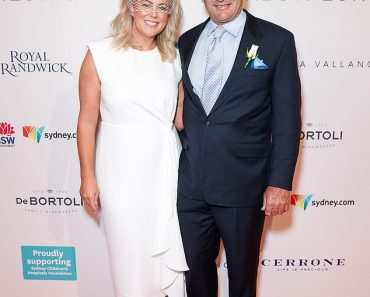 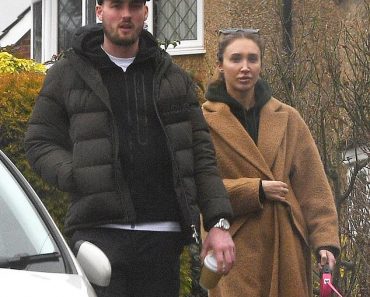 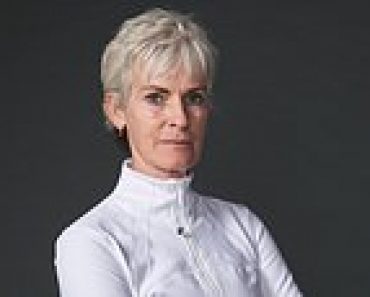 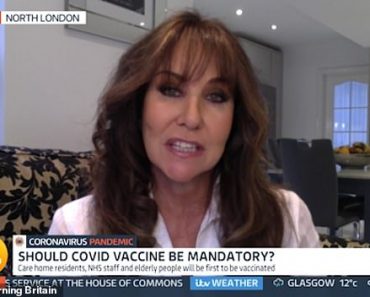