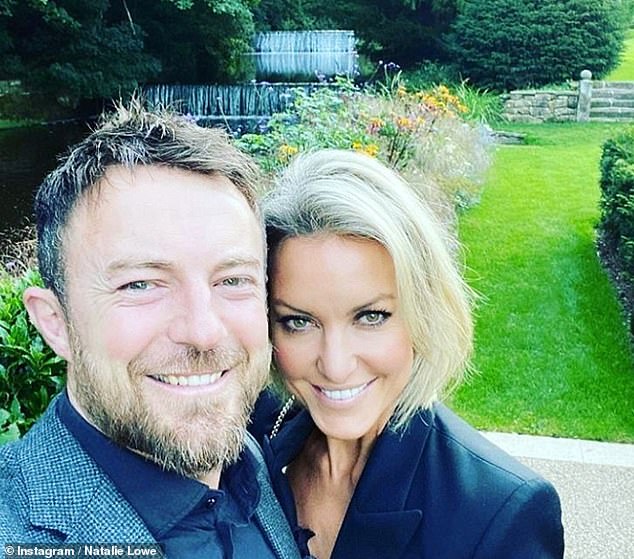 Strictly Come Dancing star Natalie Lowe has credited lockdown with making her and her husband James Knibbs ‘better people’ after their world was ‘torn apart’ by two miscarriages.

The dancer, 40, told MailOnline that she and James had doubts about being holed up at home with their son Jack, 10 months, during the COVID-19 pandemic, but have found their relationship is stronger then ever.

Natalie also spoke candidly about the tragedy of losing two babies before being blessed with her baby boy Jack last year, adding that fully sympathises with any woman who has gone through the same thing during the crisis.

Sweet: Strictly Come Dancing’s Natalie Lowe has credited lockdown with making her and her husband James Knibbs ‘better people’ after their world was ‘torn apart’ by two miscarriages

Asked how she and James had managed during lockdown, Natalie explained: ‘ I have an amazing relationship with James we’re best friends and we communicate a lot and we support each other when someone is having a down day…

‘Initially it’s… ”oh how are we gonna live in each other’s spaces for five, six, seven days of the week,” but knowing it’s valuable time and he was just like ”I’m never home so I’m gonna embrace it.” We ended up being better people for it.’

Natalie also credited lockdown with bringing her and James closer together after struggling to start a family. 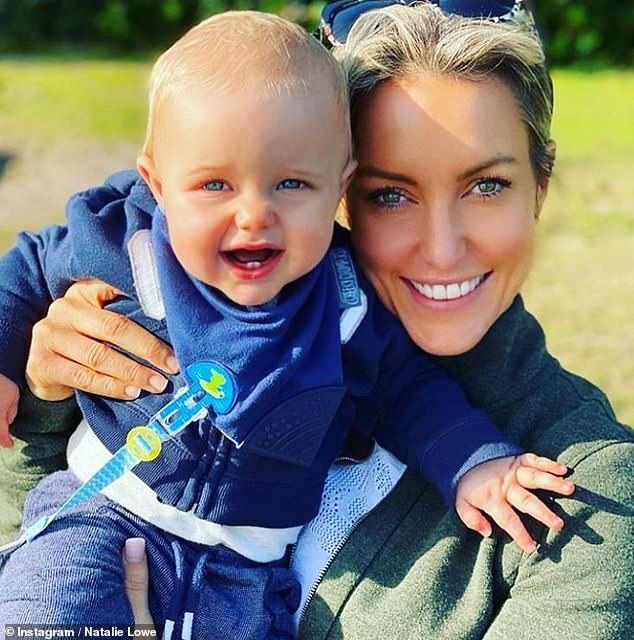 Adorable: The dancer told MailOnline that she and James had doubts about being holed up at home with son Jack during the COVID-19 pandemic, but their relationship is stronger then ever

She told MailOnline: ‘I think it could be one way or the other for many relationships we had a bit of a rough trot from our marriage with trying to have a baby and trying to have the family that we wanted after leaving Strictly so a couple of our years were quite challenging personally.

‘Don’t get me wrong there are days when you think ”I just want to go down to the coffee shop and have my own space,” but James was creative and created a gym and a little bit of a man cave for himself.

‘All that previous work we did being athletes I think all the work we did prior to this has really helped me cope and manage and really have a positive mindset about things.’ 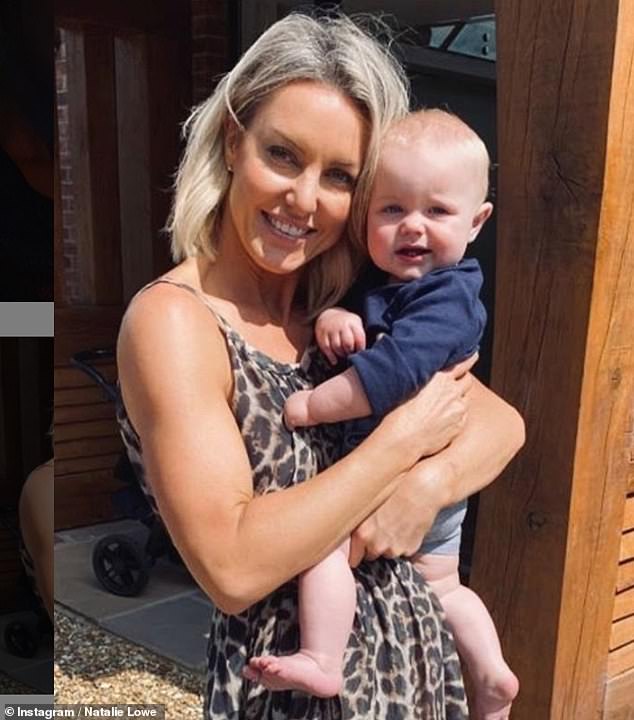 Cute: Natalie also spoke candidly about the tragedy of losing two babies before being blessed with her baby boy Jack last year

Despite finding a solid balance in lockdown, Natalie also revealed she and James are planning a temporary move back to her hometown in Sydney Australia with their son, to be closer to her mum and dad, who is struggling with health issues.

Before welcoming her son Jack, Natalie revealed she suffered two miscarriages, after falling pregnant three weeks before she and James married in 2018.

She said: ‘It tore my world apart, and it’s not what you expect, you know, you get married and you expect to have a couple of awesome years and it just wasn’t.

‘You know there was a real void missing and you know, if it didn’t happen it didn’t happen and I’m very aware that everything happens for a reason and if it’s meant to be it will be and I do have that philosophy although at the time, you know, you think your world’s ended .’

‘I really started to look after myself and you know years and years of dancing and training and putting my body through absolute blood sweat and tears is not healthy and I had a chance to reflect, get myself, you know, healthy and happy and relaxed and not stressing about work and then for me it happened at the right time.’ 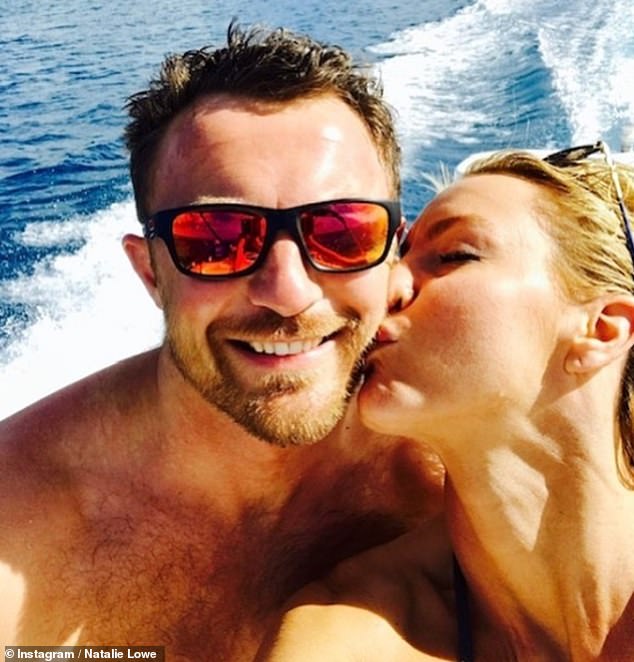 Close: She admitted that there was a ‘rough trot’ in the early months of her and James’ marriage, as they struggled to start a family

Natalie added that she fully sympathised with other women going through pregnancy during lockdown, and can understand other women may find it a ‘daunting experience’ if they’ve gone through a miscarriage like she did

She added: ‘I’ve had my friends who were pregnant during this time, you need you listen to a lot of stories like, you know, women just can’t go to that, you know, like although they could go to the local GP but there’s a lot of fear around it.

‘You don’t want to have that fear during your pregnancy you want it to be as joyful, although it’s a daunting experience.

‘Some women have a lot of difficult journeys and and the pregnancy isn’t as joyful as as you’d imagine it to be, it’s a scary process so to put COVID on top of things is just so unfortunate but it is what it is.

‘People are managing and there are amazing charities out there like miscarriages association supporting people in time of the need. Yeah it’s not easy but as a community, yeah we need to get through it together.’ 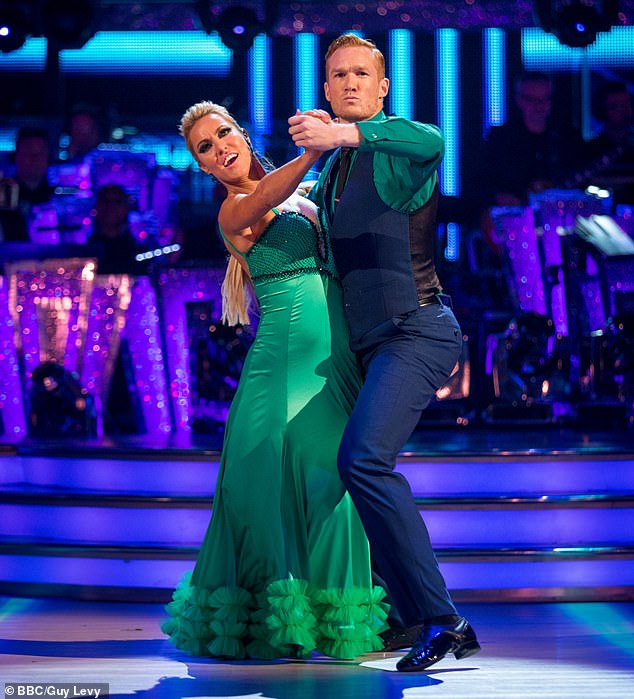 Dazzling: She starred as a pro on Strictly Come Dancing from 2009 to 2016 (pictured with her last celebrity partner Greg Rutherford)

Natalie first became pregnant three weeks before her wedding to husband James Knibbs in Australia in 2018, but on her flight back to the UK she found she ‘didn’t feel right’.

Three months after her first miscarriage Natalie discovered that she was pregnant again, while on honeymoon in South Africa with James.

Just two months later, Natalie received the same devastating news and admitted she had a mental breakdown shortly after when she suddenly broke down in tears.

The star announced she was expecting in August 2019 and welcomed Jack a week early on December 7 following a cesarean section.

The beauty was advised to stop exercising which included her ‘passion’ for dancing following her first miscarriage but also told MailOnline she’s been recording fitness classes in her garage during lockdown. 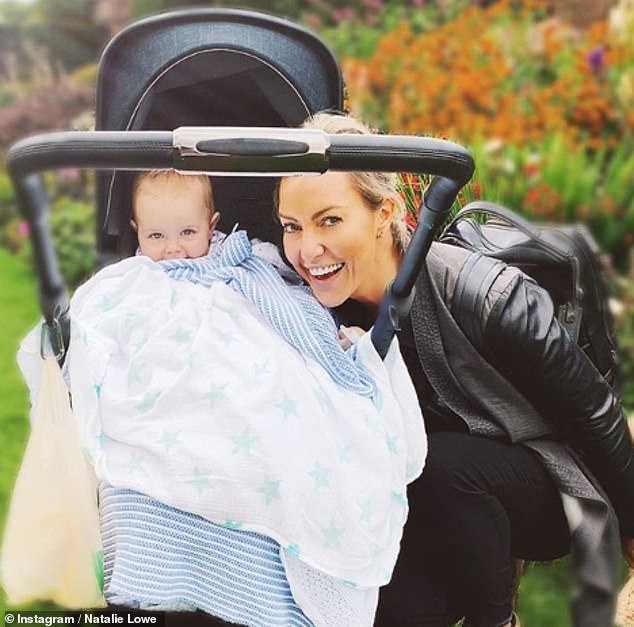 Happy family: The star announced she was expecting in August 2019 and welcomed Jack a week early on December 7 following a cesarean section