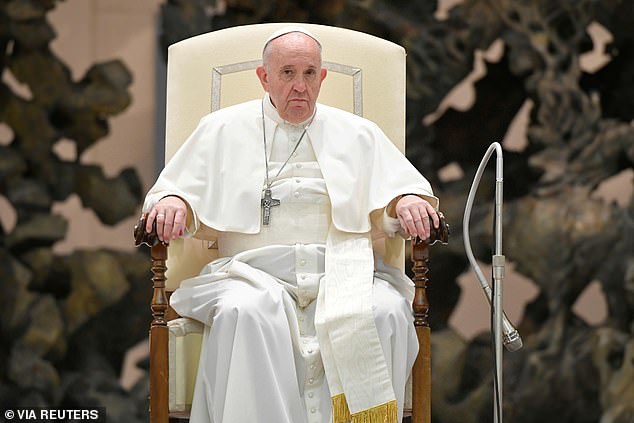 The Pope halts public audiences due to the threat of coronavirus

By Chris Jewers For Mailonline and Press Association

Pope Francis has halted his public general audiences and will limit participation at Christmas and other upcoming Masses amid a surge of coronavirus cases in Italy and the Vatican.

Starting next week, Francis will resume live-streaming his weekly catechism lessons from his library in the Apostolic Palace, as he did during the Covid-19 lockdown in the spring and summer, the Vatican said.

In addition, Francis’s liturgical events over the next few weeks and months — including Christmas — will be attended by limited numbers of faithful although a spokesman said plans could change as the health situation evolves.

Starting next week, Francis will resume live-streaming his weekly catechism lessons from his library in the Apostolic Palace as he did during the spring coronavirus lockdown. Pictured: Pope Francis attends the weekly general audience in Aula Paolo VI at the Vatican, October 28, two days before announcing he will halt public general audiences

The shift nevertheless indicated that the Vatican is moving back into partial lockdown mode along with the rest of Italy as Europe experiences surging Covid-19 infections that are putting pressure on already overburdened healthcare systems.

The Vatican City State has not been spared, with 13 Swiss Guards testing positive this month. All told, the Holy See’s official caseload stands at 27, according to the Johns Hopkins University running tally.

After Italy largely tamed the virus with a strict lockdown over the spring and summer, Francis resumed his Wednesday general audiences on September 2 in a Vatican courtyard with limited numbers of faithful participating.

They were told to wear face masks, and had to reserve tickets online and provide contact information. In announcing the return to live-streamed audiences, the Vatican reported that someone who attended the October 21 audience tested positive.

In recent weeks, as infections began to rise, Francis refrained from greeting well-wishers at the audiences to prevent people from crowding around him.

But he still refused to wear a protective face mask when greeting bishops at the end of the encounters, and Vatican protocol officials did not force the clergymen to keep theirs on when they chatted with the pontiff one-on-one. 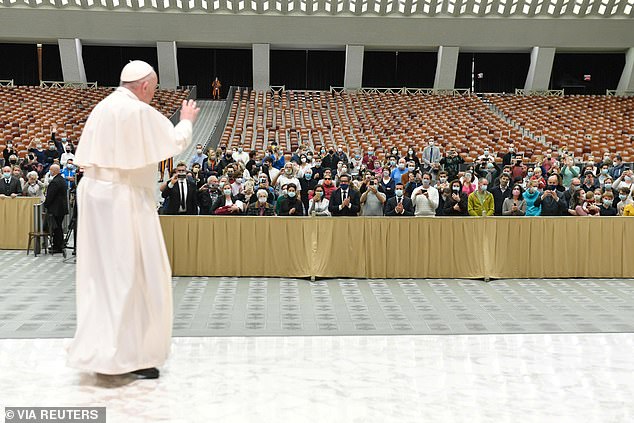 Italy and the Vatican have both seen a surge in coronavirus cases in recent weeks. All told, the Holy See’s official caseload stands at 27, according to the Johns Hopkins University tally

Francis’s decision to eschew the mask drew criticism on social media and concern from within the Vatican.

Aged 83 and with part of his lung removed after an illness in his youth, Francis would be at high risk for complications if he were to become infected.

While Francis’s lung condition could explain his reluctance to wear a mask, there has been no comment from the Vatican about why protocol officials allowed other people to get close to him without donning face protection. 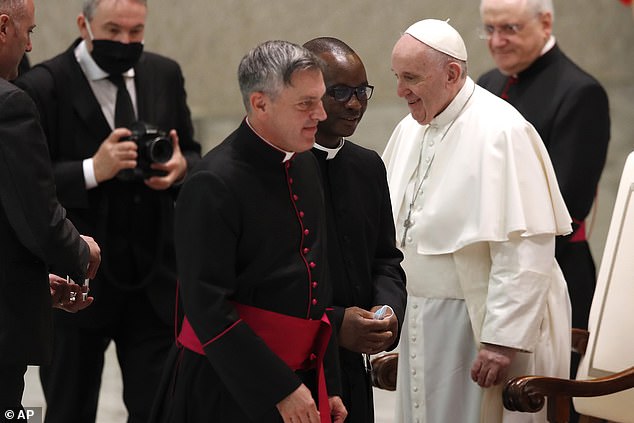 Some have been critical of Pope Francis for often not wearing a mask during his public addresses. even though Vatican regulations call for masks indoors and out when social distancing cannot be guaranteed. Pictured: Pope Francis speaks to bishops at the end of his weekly general audience on Wednesday

Earlier this week, the Vatican’s own Covid-19 experts raised concerns over Pope Francis‘ decision to forgo wearing a mask, saying the pontiff is particularly vulnerable to the disease.

The Rev Augusto Zampini – one of the key members of the pontiff’s Covid-19 commission – acknowledged that at the age of 83 and with part of his lung having been removed after an illness in his youth, Francis would be at high risk for complications if he were to become infected with Covid-19.

Zampini is one of a commission of experts Francis appointed to help chart the Catholic Church’s path through the coronavirus pandemic.

Francis has courted some criticism for declining to wear a mask when indoors, even though Vatican regulations call for masks indoors and out when social distancing cannot be guaranteed.

While Francis’ lung condition could help explain his decision to forgo the mask, he donned one for more than two hours last week when he presided over an indoor and outdoor inter-religious prayer service in Rome.