Amber Heard was spotted out in Los Angeles on Friday as she searched for some new reading material.

The 34-year-old Aquaman star ventured out in LA’s hip Los Feliz neighborhood with a friend as they made a stop at a bookstore.

The actress was relaxing ahead of a decision that’s expected Monday in her ex-husband Johnny Depp‘s libel suit against the UK-based tabloid The Sun.

Stocking up: Amber Heard, 34, was seen dropping by a bookstore in Los Angeles’ Los Feliz neighborhood with a male friend on Friday

Amber looked sleek in a casual black sleeveless dress that reached down to her knees.

She rounded out her minimalist ensemble with a pair of brown sandals that strapped around her ankles.

The Her Smell actress had her blonde tresses held back with a pink hairband and tied in a messy bun.

She accessorized and matched her dress with her black striped Yves Saint Laurent handbag. 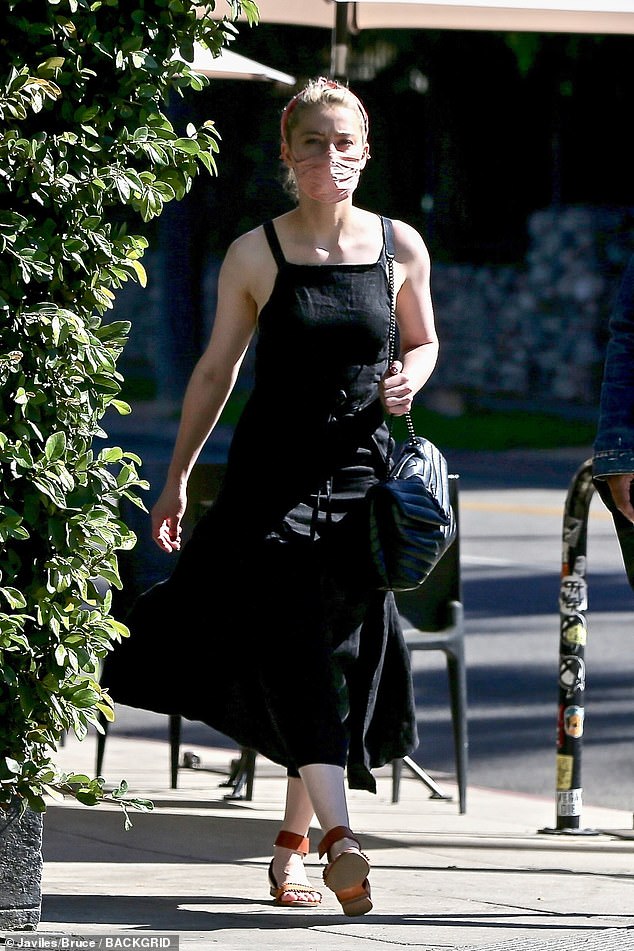 Back in black: Amber looked sleek in a casual black sleeveless dress that reached down to her knees, which she paired with brown sandals and a black Yves Saint Laurent handbag 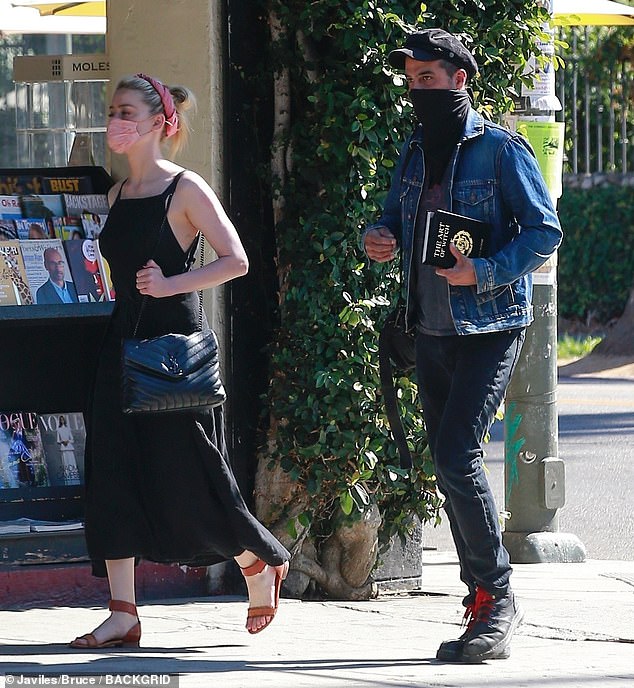 Friendly outing: Amber was joined for the day with a male friend who wore a denim jacket with a gray T-shirt and dark blue jeans, and both had on masks

Amber was joined for the day with a male friend who wore a denim jacket with a gray T-shirt and dark blue jeans, along with black boots with bright red shoe strings.

The actress had on a pink mask to help slow the spread of the novel coronavirus, even as COVID-19 cases have been surging nationwide.

Later in the day, Amber shared a selfie in which she wore a more casual outfit featuring a white T-shirt and a red and blue flannel shirt.

‘Lot to do around the yard..obviously,’ she wrote, before thanking a friend named Brandon. 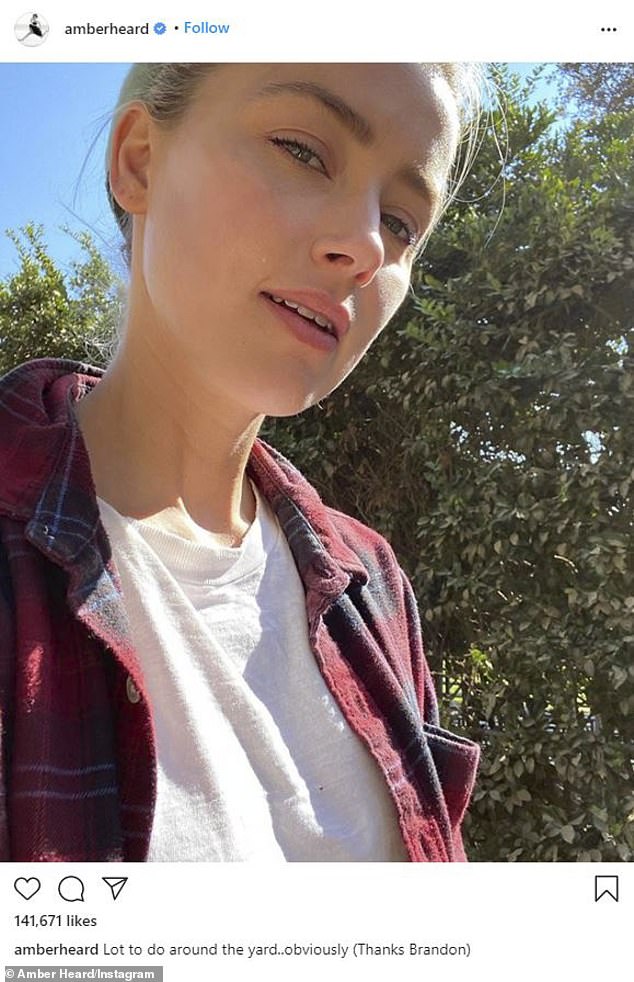 Gardening: Later in the day, Amber shared a selfie in which she wore a more casual outfit while doing yard work

Earlier this month, Amber marked a sad anniversary as she noted her mother’s first birthday since her death over the summer.

She shared a photo of herself being comforted by her girlfriend Bianca Butti in front of a shrine dedicated to her mother Paige Heard on October 2.

‘Yesterday was my mom’s birthday. They say the first one is the hardest. I hope that’s true.. although nothing will ever lessen how much I miss her or will miss being able to tell her happy birthday,’ she captioned the photo. 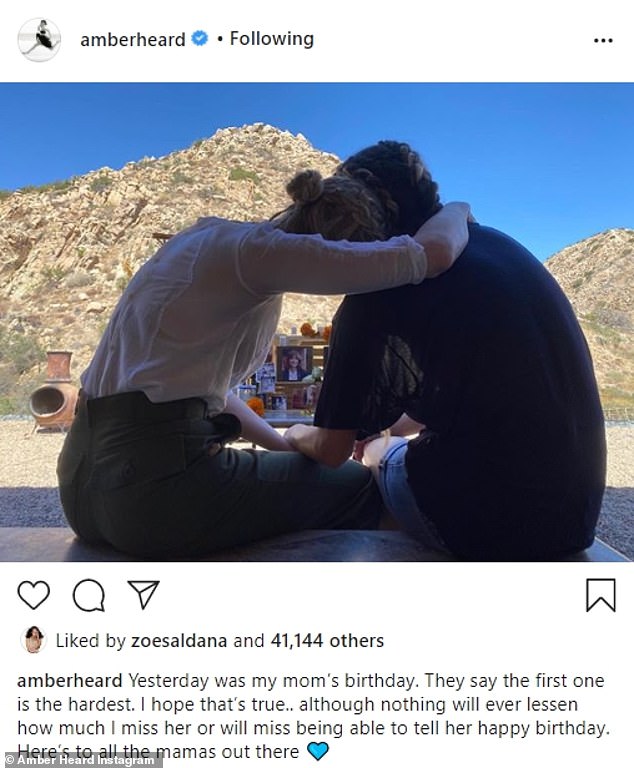 Lean on me: Taking to Instagram on October 2, the Rum Diary actress shared photos leaning on her girlfriend Bianca Butti as they looked on to a small memorial of her mother 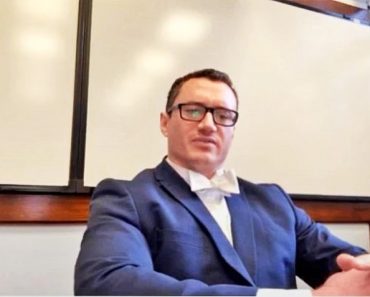 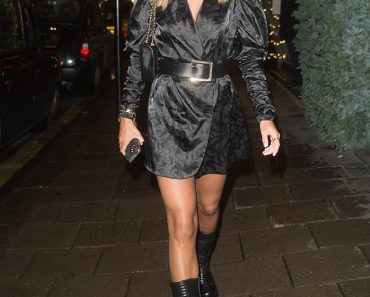 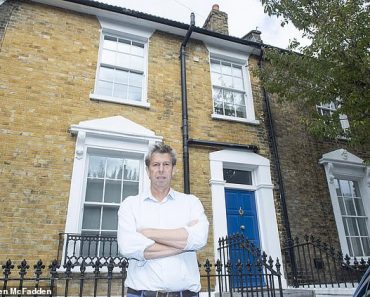 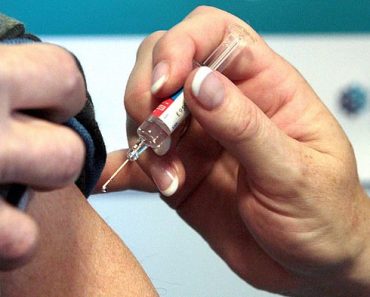 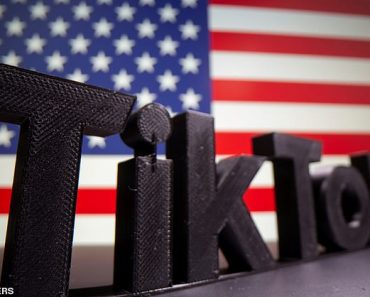