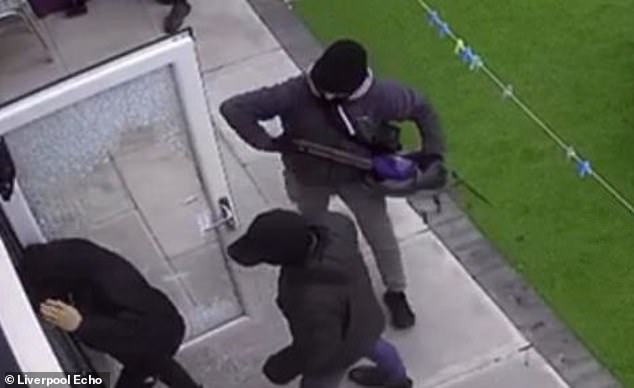 At her home in Essex on Friday last week, Sally Knight-Buxton was watching television with her 62-year-old mother Susan.

Her three children were in bed upstairs. It was an ordinary evening in an ordinary house on an ordinary street. Then, at about 10.40pm, something extraordinary happened.

‘There was a massive crashing sound,’ says Sally. ‘We had a leak in the bathroom and I thought the ceiling had collapsed.’

In fact, the back door had been wrenched open with a crowbar and three hooded, masked figures burst into her mid-terrace home in Basildon.

Sally, 34, was sprayed with an ammonia-type substance that left her unable to see, then punched in the face in the chaos that followed, while her mum was thrown to the floor.

By then the children, aged nine, seven and five, who had not been in bed long and realised something was wrong, were ‘running down the stairs screaming and crying’.

‘Petrifying’ is the word Sally uses to describe their ordeal, in which she sustained a badly swollen eye.

The crime will be recorded as a robbery. But the intruders who invaded her home were not after money, jewellery, electrical goods or car keys. They had come for three cute little bundles named Queenie, Prince and Meathead: prized English bulldog puppies.

The pups, which the raiders scooped up and whisked away in a holdall, will be worth about £5,000 each if they are sold — much more than a flat-screen TV or a PlayStation.

You might think that what happened to Sally and her family was a rare, one-off crime. But it wasn’t. 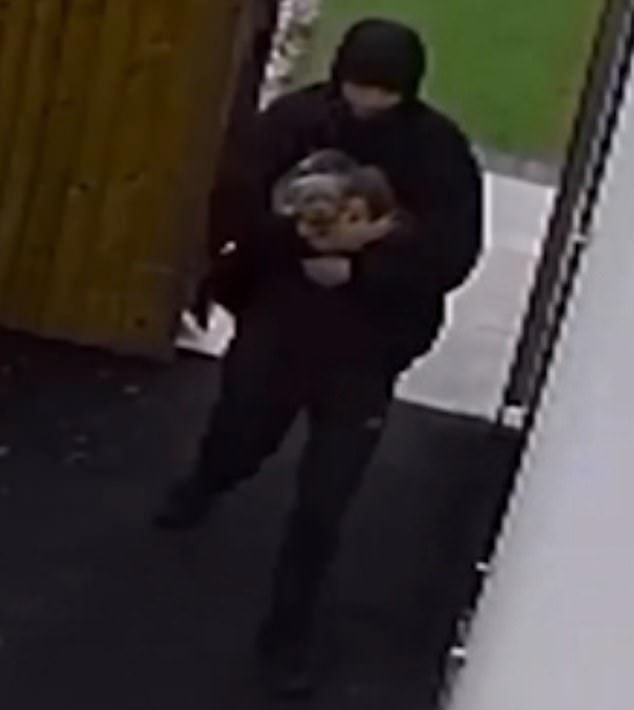 In Liverpool the thieves also make off with the couple’s prized American Pocket Bulldog puppies, as well as their car. Three men have already been taken into custody following the incident

In the past few months, with many of us spending more time at home, far more people have been buying or adopting puppies and dogs.

Soaring demand (the Kennel Club reported a 180 per cent increase this year) has led to soaring prices for many breeds, which are changing hands for an average of £2,000 more than before lockdown.

This has led to a spike in dog and puppy thefts — 2,625 already this year. But it is feared the true number could be twice as high, as frightened owners don’t always contact police.

Opportunist thieves — those who might steal someone’s pet from a garden or park, or from outside a shop while the owner is inside — are no longer the main culprits.

Criminal gangs have become increasingly active in the illicit trade during the pandemic. And ‘dognappings’ are getting more violent.

Local newspapers up and down the country have carried disturbing stories of sought-after dogs being snatched at knifepoint, and of brave owners being injured as they fought to keep hold of their pets.

In Birmingham earlier this year, two English bulldogs were stolen while their owners were out. The flat was ransacked for the animals’ pedigree and vaccination records.

And in an earlier ‘home invasion’ in the Stretford area of Manchester, two hooded thugs burst into a house and held a knife to the stomach of a heavily pregnant woman before fleeing with six French bulldog puppies.

Incidents such as these would once have been almost unthinkable.

‘We are now scared to be in our own home,’ Sally tells me on the phone from a friend’s house, where she has been staying for the past week. ‘My children keep asking if the men are going to come back.’

A few days before the raid, a member of the gang responsible is thought to have tried to force his way into the house while Sally was on the school run. Her mother was in at the time. 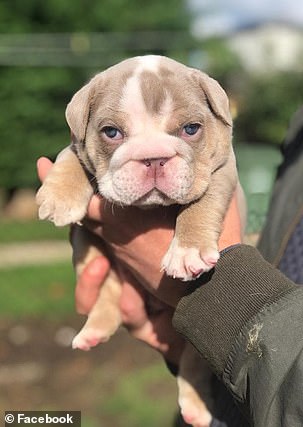 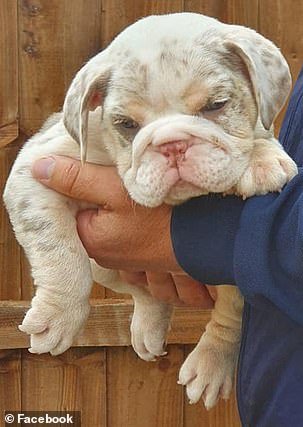 Sally Knight-Buxton says the spray left her temporarily blinded as her screaming children ran downstairs looking for the pedigree pets, including Prince (left) and Meathead (right)

‘Give me the puppies,’ he demanded when she answered the door, which she managed to shut just in time.

English bulldogs are much sought-after, their recent popularity fuelled by celebrity owners including David and Victoria Beckham and Ulrika Jonsson. And lilac-and-tan bulldog puppies, such as those stolen in Basildon, are especially prized for their colouration, which is due to a fault in their DNA coding.

Wayne May, a police liaison officer at DogLost, a free service that reunites thousands of dogs with their owners each year, has already received four tip-offs naming the ringleader of the gang, which he is passing on to police.

‘Before Covid-19, thefts were predominantly opportunistic,’ he says. ‘Now organised gangs are cashing in. We are seeing increasing cases of violence and ruthlessness, which are often not reported to police for fear of reprisals.’

One case he dealt with involved an 87-year-old woman whose Jack Russell terrier was stolen from her front garden in Kent. The next day, a ‘ransom’ note with a number to ring was put through her door.

‘She was instructed to go to a petrol station at 1am, where she handed over £3,000 in cash,’ revealed Mr May. ‘They chucked her dog out of the car window as they drove off. 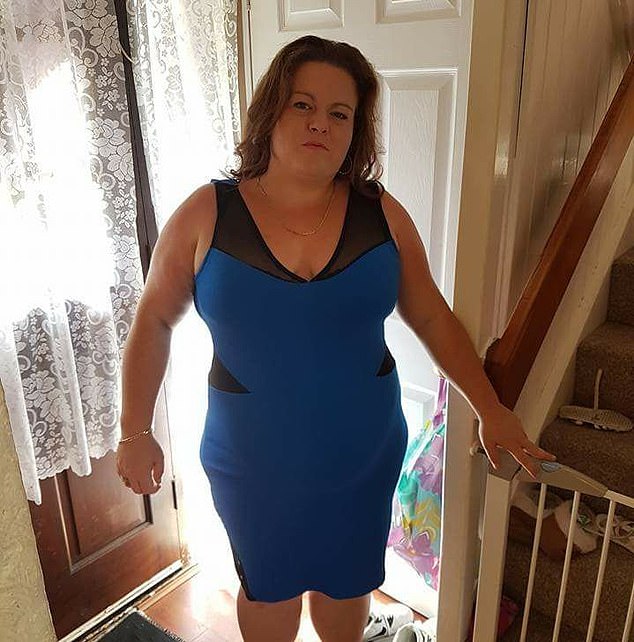 Ms Knight-Buxton (pictured) was sitting in her living watching television at about 10.40pm with her 62-year-old mother when the men struck

‘I was under a duty to report this to the police but when they went to see her, she denied all knowledge of it. Once people get their dog back, they don’t want to speak out.’

One of two main fates awaits stolen dogs. They are either immediately resold online or subjected to a life of abject misery as breeding bitches in backstreet dens. Female animals given hormone injections to bring them into season early can produce three litters a year.

One litter of pedigree pups, campaigners point out, will fetch at least £25,000 after being advertised on classified sites and pet marketplaces.

With a potential bounty of £75,000, it is not hard to see the appeal to criminals, especially as dognapping is classed as theft, an offence usually punished with a caution, a fine or community service.

Many classified adverts for pets are genuine. Some are not.

Under legislation introduced in April this year, anyone taking out such an ad has to show the puppies on offer interacting with their mother in their place of birth, to stamp out third-party sales.

To sell on stolen puppies such as Sally’s, criminals using false names on community Facebook sites, for example, will find a suitable address, such as an Airbnb property, and pass it off as a family home. A fake or ‘stooge’ mother — not the real mother of the puppies being advertised — is used to fool customers, who are given falsified paperwork if they decide to buy the puppy they have come to see.

‘People let their hearts rule their heads in such circumstances,’ explains Mr May. ‘They take their children along and the first things they say is, ‘can we have it?’

‘All the questions people would normally ask before agreeing to hand over thousands of pounds go out of the window.’

Research by the Dogs Trust charity revealed that asking prices for five coveted breeds shot up between March, when lockdown began, and the end of June.

Prices are even higher today.

On Pets4Homes, the biggest advertising website of its kind in the UK, more than 500 English bulldogs are currently on offer, at prices of up to £10,000. Clearly there is big money to be made, both legally and illegally.

Former police detective inspector Colin Butcher, who runs a private investigation agency called The Pet Detectives and has spent more than 15 years tracking down lost and stolen pets, says dog theft is becoming highly organised. More than 1,000 criminals throughout the country, he believes, are now operating in this field.

Many cases have links to the travelling community, including an inquiry he worked on recently which uncovered a hidden cellar, accessed via a trapdoor, at a stable near Southampton where stolen dogs had been kept.

When police and trading standards officers arrived, the premises were empty but they found bite marks on primitive bedding the dogs had been gnawing at in distress or hunger.

The Star Lane traveller site in St Mary Cray, in the London borough of Bromley, was raided by armed police last month. They seized a loaded shotgun, rounds of ammunition, a machete, CS gas, drugs — and 50 stolen dogs.

The chain of events that culminates in an advertisement for a pedigree dog may nowadays begin in terrifying circumstances.

Catherine Hussain’s labradoodle, Waffle, was taken from her at knifepoint outside her home in St Austell, Cornwall, a few months ago. She is convinced the assailant, who wore a black hooded top and scarf, had been watching for days to establish her routine.

‘The police told me it was a ‘random act’ but that doesn’t add up,’ says Miss Hussain, 55.

‘This happened at 7am. It was dark. You don’t get random passers-by at the flats where I live at that time of day. The man appeared from nowhere.

‘You try to socialise a puppy with other dogs and he could easily have followed me home from the park. He had a knife. Why didn’t he demand my phone or my purse? His only words were: ‘f****** dog’. Then he took the lead.’

Six dogs are stolen every day in England and Wales. ‘Organised criminal groups have found a new way to make money,’ says Sgt Brian Calver, from the rural crimes team in Suffolk.

One case on his books was a raid in July at Fiveways Kennels in Barton Mills, West Suffolk, in which 17 dogs and puppies worth at least £30,000 in total were grabbed by a gang who scaled a 10ft fence. The raiders were captured on CCTV but their faces were hidden and the registration plates of cars they used turned out to be false.

A cocker spaniel and a cockapoo belonging to nursery owner Melissa Murfet were among the pets that were stolen, leaving her four children distraught.

‘I don’t think we will ever be able to reopen after what has happened,’ said Jason Francis, who owns the kennels. ‘Eighteen years of hard slog have gone down the plughole.

‘Why sell drugs for ten or 15 quid when it takes 30 seconds to steal a dog and earn yourself two grand?’