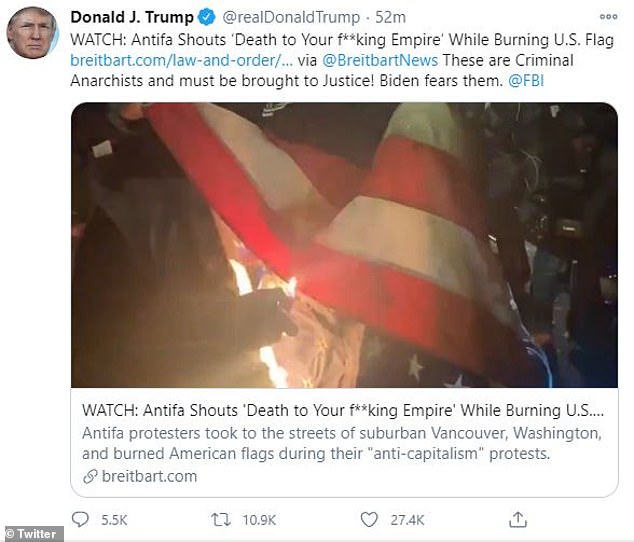 President Donald Trump has slammed Antifa protesters as ‘criminal anarchists’ after they were filmed burning an American flag and shouting ‘Death to your f***ing empire!’ during an anti-capitalism protest.

The president tweeted a video showing the protesters burn the flag in the streets of suburban Vancouver, near Portland, in Washington on Halloween night to denounce capitalism.

‘These are Criminal Anarchists and must be brought to Justice! Biden fears them,’ he tweeted while tagging the FBI.

Trump has frequently denounced the militant left-wing anarchist group which believes in using street-level force to prevent what they see as the rise of fascist movements.

President Donald Trump has slammed Antifa protesters who burned an American flag in the streets of Washington and shouted ‘Death to your f***ing empire!’ as ‘criminal anarchists’, demanding they face justice 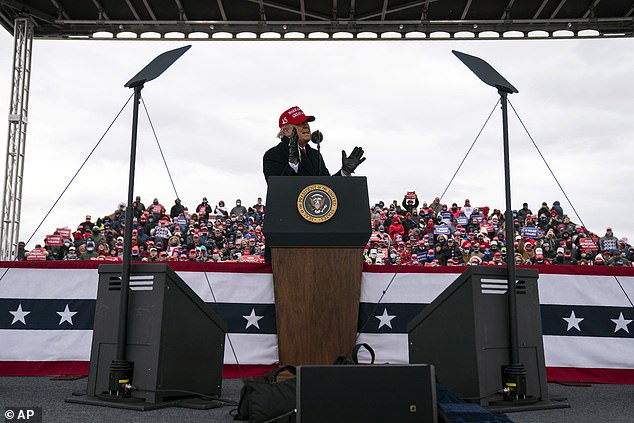 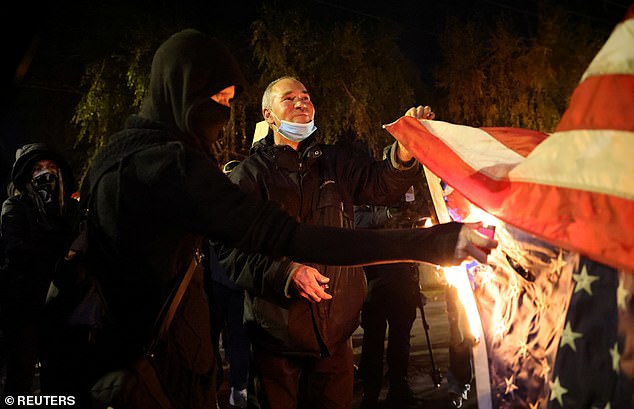 A view of black-clad Antifa protesters burning an American flag during a protest in Vancouver, Washington on Saturday night 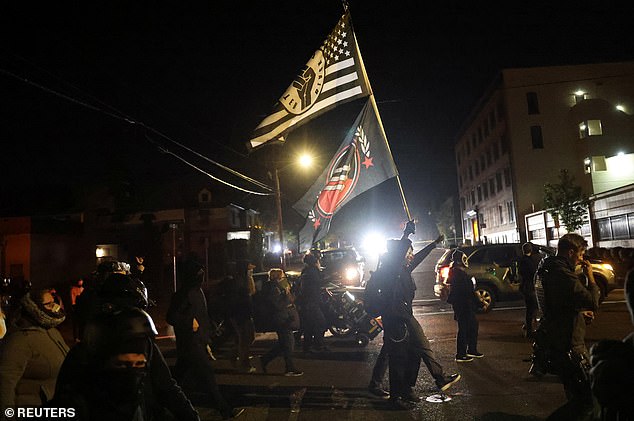 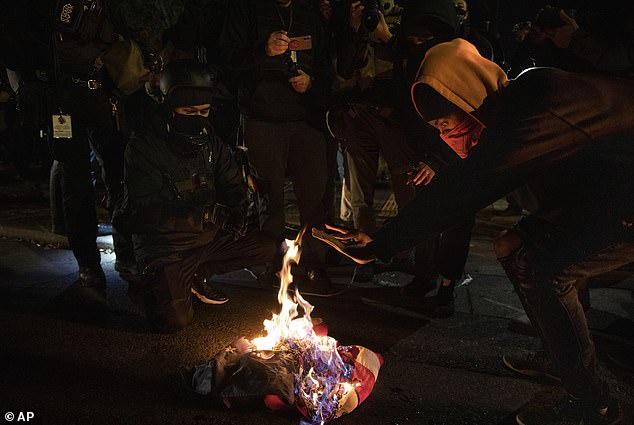 In video of the protest Antifa members were heard shouting ‘Death to your f***ing empire! You sick f***s!’ and ‘F*** you for all the Native Americans that you f***ing killed! You … mother f***ers!’

Antifa, which is short for ‘anti-fascist’, seeks to confront racist and authoritarian groups and they known for dressing in all black and being unabashed by physical violence.

The video shows a crowd of jeering Antifa protesters aggressively shout and denounce capitalism in the US.

‘Everyone of you has blood on your hands,’ one rioter said in the heated video.

The protesters then listed off groups hat the nation has historically oppressed.

‘All the Black people, all the Iraqis. All the Afghan[s]. All the Vietnamese!’ the protesters continued.

Throughout the night Antifa rioters marched through the streets of Vancouver and Portland, Oregon where they broke windows and defaced buildings in a planned protest. 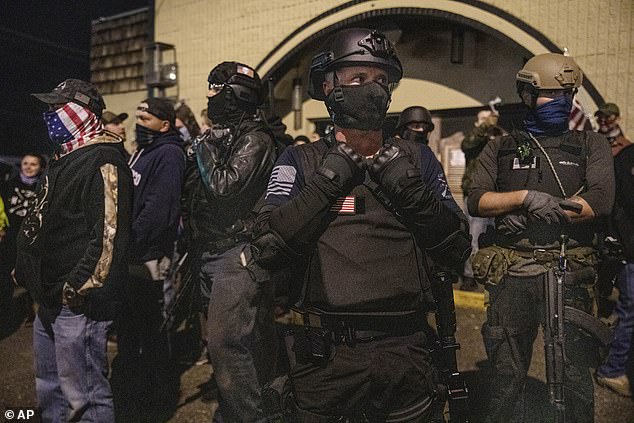 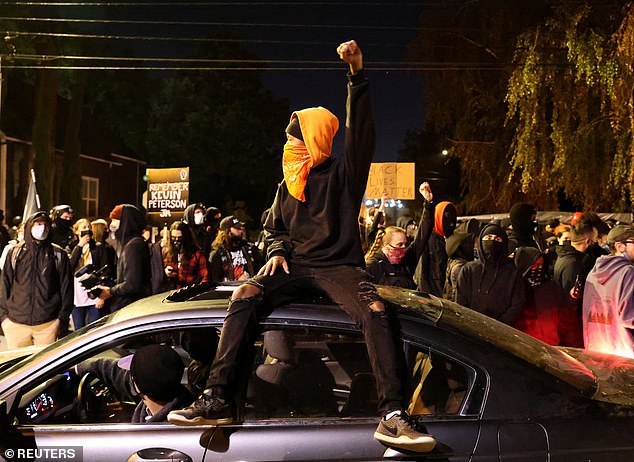 A demonstrator pictured raising his first during the Antifa protest against capitalism in Vancouver, Washington

This summer as Black Lives Matter protests unfolded across the country and violence and looting broke out, President Trump accused Antifa members of using the demonstrations to burn the country down.

Trump has said he will officially label Antifa as a terrorist group, placing it on a federal list alongside al-Qaeda and ISIS.

On Saturday afternoon in Beverly Hills, California, Antifa supporters attacked a participant at a Trump ‘USA Freedom Rally’,  where thousands of fans showed up to support the president.

Video from the incident shows black-blad Antifa supporters attacking a member of the rally. 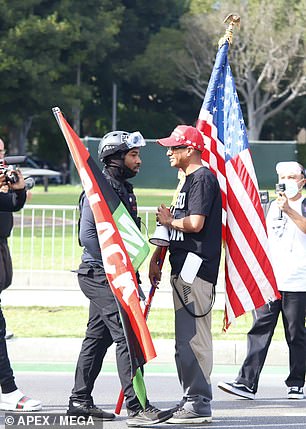 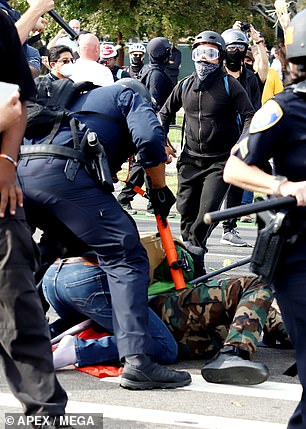 In Beverly Hills, political violence broke out between Trump supporters and left-wing groups. Left, a BLM backer and pro-Trump demonstrator remain peaceful, and right, police separate another pair of clashing protesters on Saturday 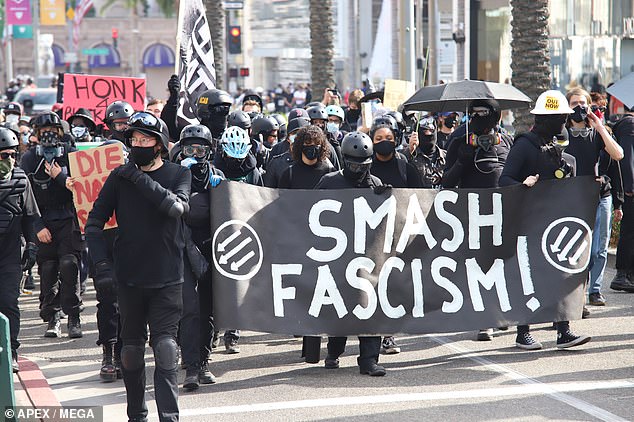 Antifa supporters marched Saturday to oppose the Trump rally, and violent clashes broke out between the groups as cops struggled to keep them separated and maintain the peace

At first Trump a supporter is seen grappling with a black-clad counter-protester who is attempting to snatch away his American flag after heated verbal disputes.

Seconds after the Trump supporter throws an elbow at the assailant, at least six other apparent Antifa supporters swarm at the pro-Trump demonstrator, pummelling him with fists and a lead pipe.

At the sound of a police siren, the attackers dispersed and fled into the crowd. The Trump supporter was seen chasing one of the assailants and swinging at his back with a wooden flag pole.

Moments later, police declared the rally an unlawful assembly and ordered the crowd to disperse. Protesters cleared the intersection but the pro-Trump rally continued with a march through Beverly Hills.

The pro-Trump protester had injuries to his face and was treated by the Beverly Hills Fire Department, a police official said.

WHAT IS THE ANTI-FASCIST MOVEMENT (ANTIFA)

The anti-fascist protest movement known as antifa gained new prominence in the United States after the white supremacist Unite the Right rally in Charlottesville, VA, in August 2017.

In Charlottesville and at many subsequent events held by white supremacists or right-wing extremists, antifa activists have aggressively confronted what they believe to be authoritarian movements and groups.

While most counter-protestors tend to be peaceful, there have been several instances where encounters between antifa and the far-right have turned violent. 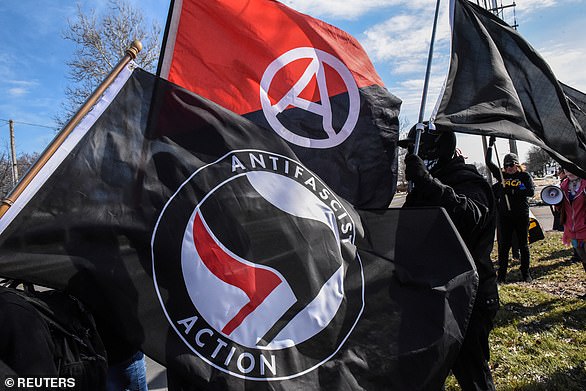 The antifa sometimes use a logo with a double flag, usually in black and red

These violent counter-protesters are often part of ‘antifa’ (short for ‘antifascist’), a loose collection of groups, networks and individuals who believe in active, aggressive opposition to far right-wing movements. Their ideology is rooted in the assumption that the Nazi party would never have been able to come to power in Germany if people had more aggressively fought them in the streets in the 1920s and 30s.

Most antifa come from the anarchist movement or from the far left, though since the 2016 presidential election, some people with more mainstream political backgrounds have also joined their ranks.

The antifa sometimes use a logo with a double flag, usually in black and red. The antifa movement began in the 1960s in Europe, and had reached the US by the end of the 1970s. Most people who show up to counter or oppose white supremacist public events are peaceful demonstrators, but when antifa show up, as they frequently do, they can increase the chances that an event may turn violent.

Antifa have expanded their definition of fascist/fascism to include not just white supremacists and other extremists, but also many conservatives and supporters of President Trump.

Because there is no unifying body for antifa, it is impossible to know how many ‘members’ are currently active. Different localities have antifa populations of different strengths, but antifa are also sometimes willing to travel hundreds of miles to oppose a white supremacist event.