Six people have now been arrested in connection with the knife attack at the Notre Dame Basilica in France which left three dead, police sources have said.

The men remained in custody on Sunday after being detained in Nice and the nearby town of Grasse.

It comes as police investigate chief suspect Brahim Aoussaoui, a 21-year-old Tunisian who transited through Italy last month en route to France before launching his vicious attack on worshippers at the cathedral in Nice.

Officers suspect local accomplices assisted Assouaoui to the church after he received orders to travel to France to carry out the attack – which was planned in advance, the Journal du Dimanche newspaper reports.

The men in custody are between 25 and 63-years-old and were spotted on video surveillance or detained in homes searched by police as part of the investigation.

Their connection to the attack remains unclear. 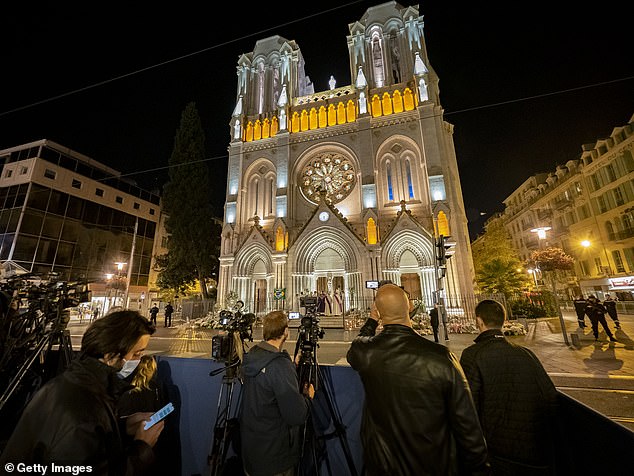 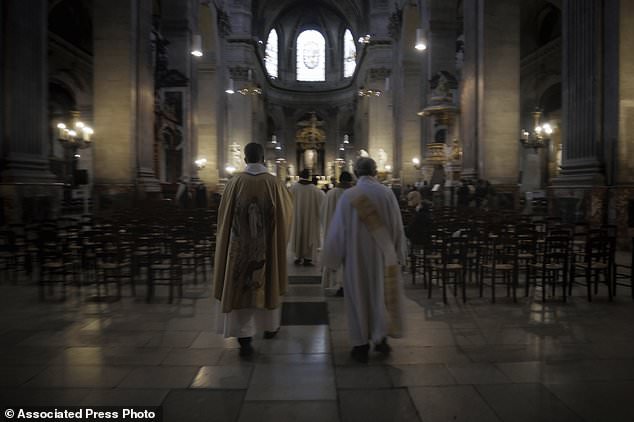 Priest Henri de La Hougue and his assistants celebrate the All Saints Day mass in Saint-Sulpice church, in Paris

The arrests come as it emerged that Assouaoui sent a selfie to his friends in Tunisia to show off his new clothes a day before the attack.

The picture, which was taken in a shop in France, was among a series of images the 21-year-old sent to friends and family as he travelled across Europe and worked illegally.

His older brother Yassin, 38, who said Assouaoui had given no indication of his plan, said: ‘He bought new clothes and a mobile phone in France with the money he had earned working harvesting olives in Italy.

‘He was very proud of his new clothes and wanted to show us he was doing well.

‘Brahim said he wanted to go to Europe to earn money to buy a car.’

Today churches around France held Sunday services honouring the three people killed in the city of Nice that pushed the country into high security alert.

Today Nice Archbishop Andre Marceau gave a special nighttime service in the basilica and paid homage to the victims on All Saints’ Day- a day when many Christians around the world honour the dead.

Priests in the Saint-Sulpice Church in Paris and elsewhere in France mentioned the attack during their All Saints’ services, which were allowed to go ahead despite a new month-long virus lockdown that started on Friday in France.

Riot police or other security forces were also stationed at some prominent religious sites.

During the attack last week, Brahim Aoussaoui arrived in Nice at around 6.30am via the railway station, where he quickly changed his clothes.

CCTV then showed him arriving in the church at 8.30am and staying there for nearly half an hour.

French anti-terror prosecutors said Aoussaoui attacked worshippers in the heart of the Mediterranean resort city with a foot-long blade.

The three victims were 55-year-old church warden Vincent Loques, a father of two described by parishioners and nearby merchants as ‘nice to everyone’; churchgoer Nadine Devillers, 60; and Brazilian-born Simone Barreto Silva, 44. 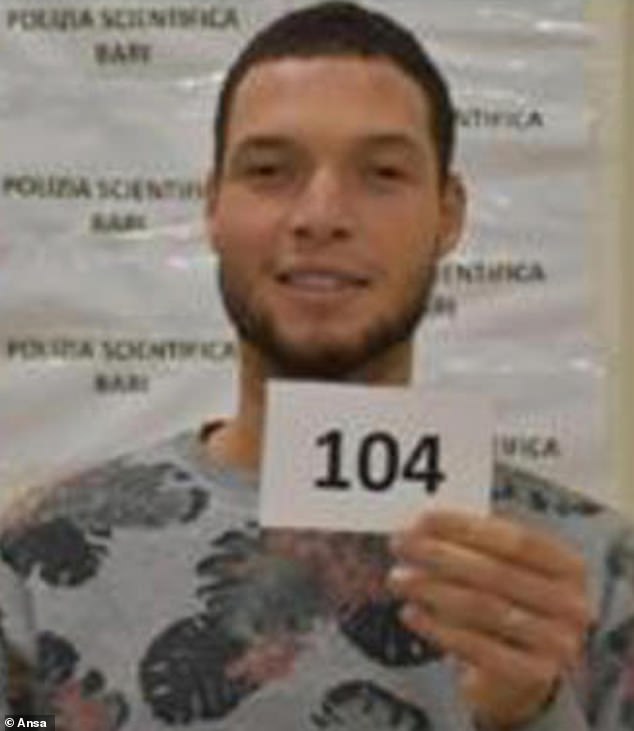 Nice terrorist Brahim Aoussaoui is seen in a photograph taken at the Italian port city of Bari, where he disembarked from a coronavirus quarantine ship on October 8 – marking his arrival in mainland Europe 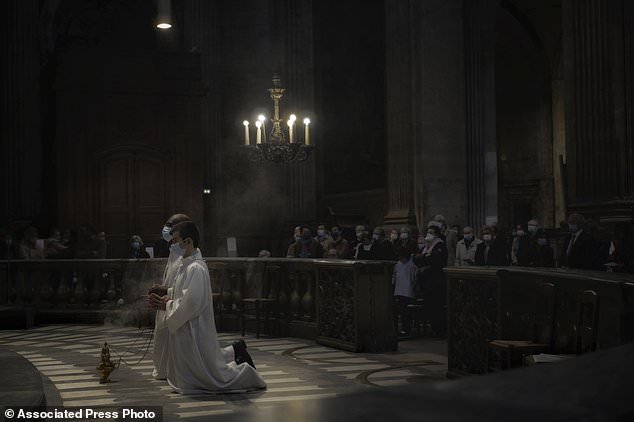 Priest honour the dead during an All Saints Day mass in Saint-Sulpice church, in Paris today 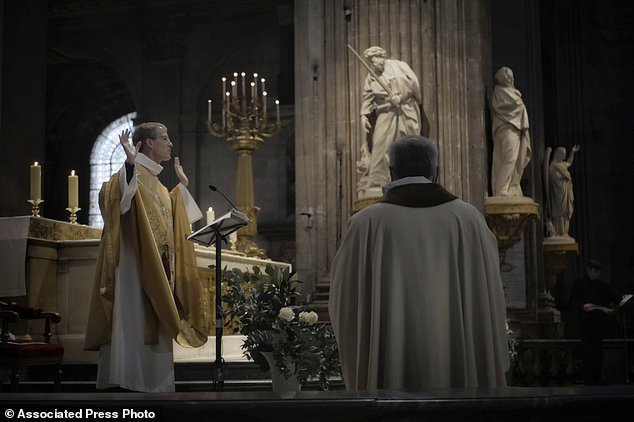 Brazilian media said Silva, a mother of three, moved to France to join a dance group led by her sister, worked in elder care and dreamed of traveling the world in a food truck.

The assailant was shot 14 times by armed police as he screamed ‘God is greatest’ in Arabic during the attack and ‘while under medication’ as he was taken to hospital, Nice’s Mayor Christian Estrosi said.

Authorities have labeled the church killings an act of Islamist terrorism.

Aoussaoui is in critical condition in a French hospital after being wounded by police during his arrest and has yet to be questioned, according to a judicial official.

The killings, which occurred ahead of the Catholic holy day of All Saints Day on Sunday, prompted the French government to raise the terror alert level to the maximum ’emergency’ level nationwide.

President Emmanuel Macron, who quickly travelled to Nice, announced increased surveillance of churches by France’s Sentinelle military patrols, to be bolstered to 7,000 troops from 3,000. 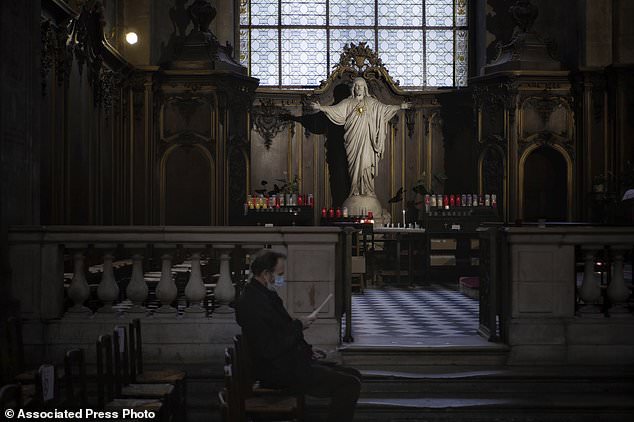 A Catholic worshipper attends the All Saints Day mass in Saint-Sulpice church, in Paris 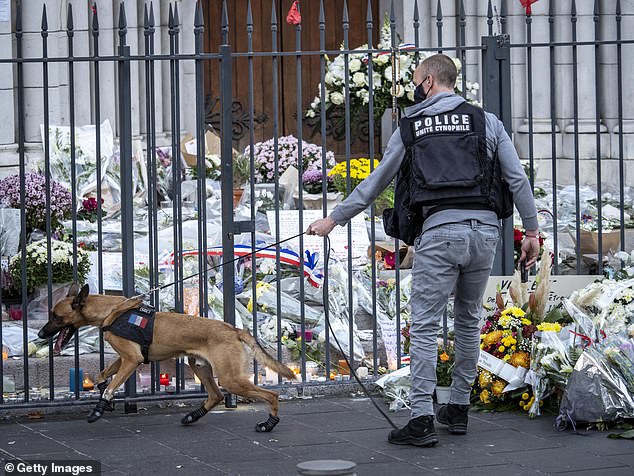