Kate Garraway has been dealt another blow in her tough year, revealing on Monday morning that her family car was stolen from outside her London home.

The Good Morning Britain star joined co-stars Piers Morgan and Susanna Reid via video link during Monday’s show to give an update on her husband Derek Draper’s ongoing battle with coronavirus.

Piers was keen to tell viewers about Kate’s latest setback, hitting out at the thieves, who he labelled ‘disgusting scumbags’.

Tough: Kate Garraway has been dealt another blow in her tough year, revealing on Monday morning that her family car was stolen from outside her London home

‘Initially I thought it’s bound to be an unpaid parking ticket that Derek hasn’t been able to sort out while out of action since March and it’s probably gone through a system and it’s been impounded – but it’s actually been stolen,’ she explained to Piers and Susanna.

‘It is absolutely disgusting. If you know someone who has this car…It makes me puke that someone has done this.’ 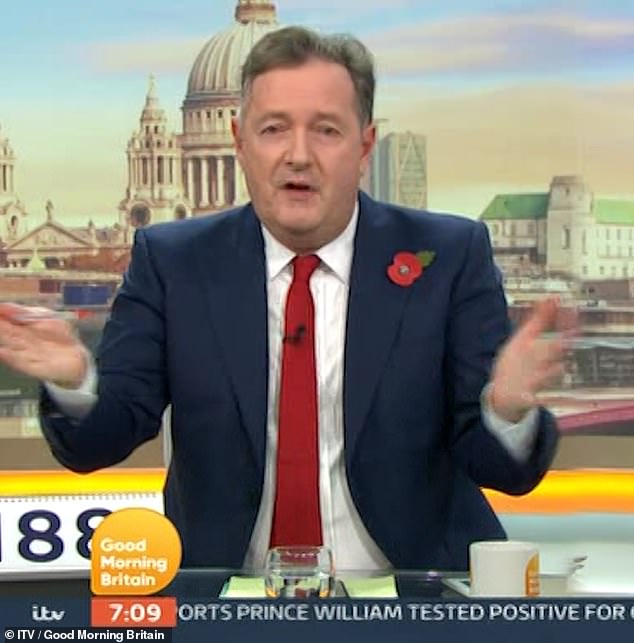 Hitting out: Piers Morganwas keen to tell viewers about Kate’s latest setback, slamming the thieves, who he labelled ‘disgusting scumbags’

Kate described her car as ‘silver, battered, old, and it’s got a roofbox.’

She added: ‘I don’t know but it was such a body blow – particularly to my son Billy. That was our family car and it’s just like another thing that’s been grabbed away.

‘There are bigger things than a car going on right now, but it’s one of those things.’

Piers added: ‘We’ll get your car situation fixed today,’ asking for Volvo to get in touch and help out. 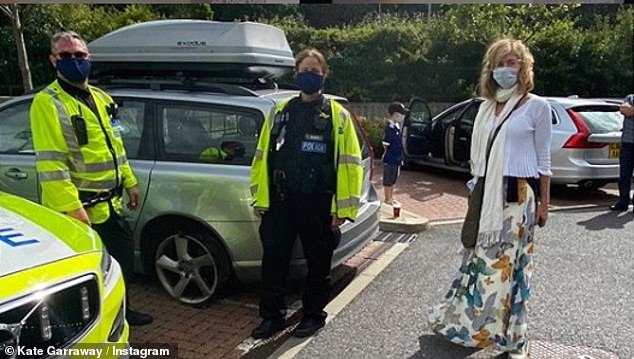 ‘Old and battered’: Kate explained her and husband Derek’s 20-year-old car, nicknamed Vicky Volvo, had been taken overnight. She previously shared a snap of the car in July when she suffered a tyre blowout

He then turned to the criminals and made a direct plea, telling the camera:  ‘Honestly if you took that car look at your humanity for a moment please and give the damn car back.

‘It’s got sentimental value. It is the family car and it’s the only the two kids have known, it’s part of the family life. This family needs that car.’

Elsewhere in her Monday talk with Piers and Susanna, Kate fought back tears as she recalled the ‘breakthrough’ moment her husband Derek spoke his first word since emerging from a coma. 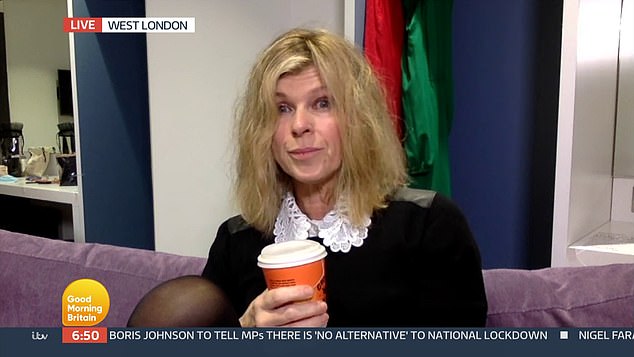 Family car: She added: ‘I don’t know but it was such a body blow – particularly to my son Billy. That was our family car and it’s just like another thing that’s been grabbed away’

The Good Morning Britain presenter revealed Draper appeared to mouth the word ‘pain’ when asked by nurses if he was in any discomfort.

While Kate said it was ‘heartbreaking’ he was suffering, it marked progress in his recovery since being struck down with coronavirus in March.

But the 53-year-old is ‘keeping herself in check’ and said: ‘The power of hope is huge but you’re constantly trying to think, at what point do I have to start being real.’

Speaking to GMB from west London, she said: ‘Way back in April when we chatted for the first time and I said “look he seems to have survives so far, so I know I already have my miracle”. 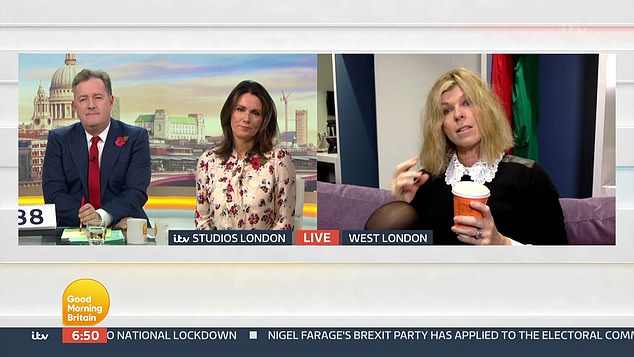 Tough time: The GMB star joined co-stars Piers and Susanna Reid via video link during Monday’s show to give an update on her husband Derek Draper’s battle with coronavirus

‘But now I’m praying for the second miracle and that is for him to come back to us. It’s very difficult because this could be it. I’m very much trying to keep myself in check, not start crying, because we still don’t know.’

Kate explained that throughout 53-year-old Draper’s hospitalisation, doctors and nurses have continued treating him as if conscious, telling him when they were about to move him and asking if he were in any pain.

She recalled: ‘And they did this, and he very clearly mouthed the word “pain”. Everybody that was there stopped and couldn’t believe it.’

The TV presenter added: ‘It is a huge breakthrough, obviously it’s heartbreaking because he feels pain and that’s not what we want….

‘What it means is that he’s been able to connect a sensation in his body, with his mouth through his brain to say the word “pain”. 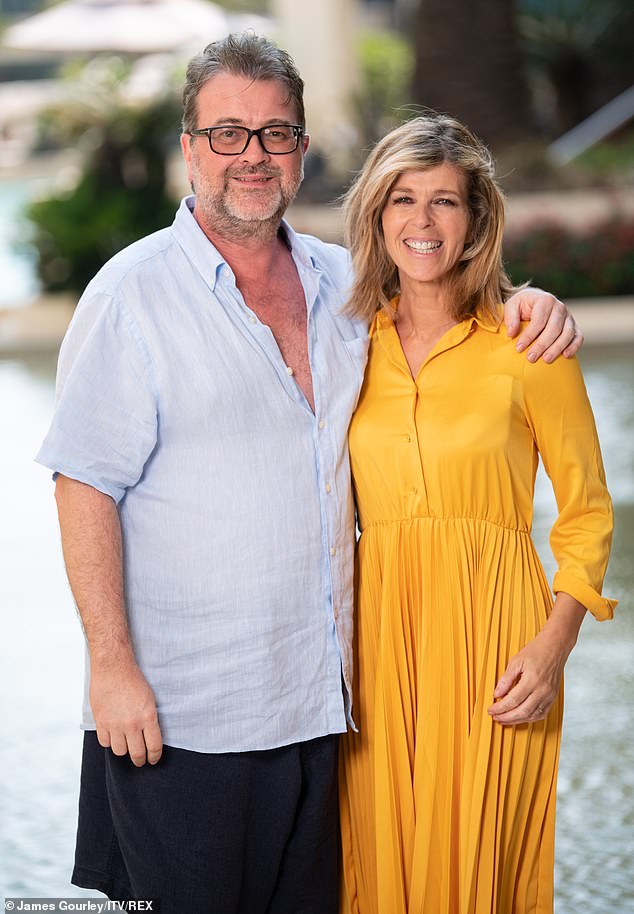 Battle: Kate fought back tears as she recalled the ‘breakthrough’ moment her husband Derek spoke his first word since emerging from a coma (pictured with Derek in December 2019)

But she said: ‘I’ve spoken to you both before about is he still in there, is he locked away. I believe he is still in there. That’s a long way from being Derek with all his multiple words of colour with all the love, but it’s a start.

‘The power of hope is huge but you’re constantly trying to think, at what point do I have to start being real

She said there was ‘still a long road to go and we still don’t know how far down that road he can come’.

In August, Kate revealed she is writing a self-help book as she continues to support Derek. She admitted that she was given the deal before Derek’s illness and is now tweaking the book to include ‘insights’ from the ordeal.

She plans to call the book Good Morning Life: How To Wake Up Every Day And Smile.

A timeline of Derek’s coronavirus battle

Kate revealed she and Prince Charles had got ‘relatively close’ at the Prince’s Trust Awards on March 11 – Charles was diagnosed with coronavirus in mid-March.

‘He said he had a headache, numbness in his right hand, and was struggling to breathe,

‘I rang Dr Hilary (Jones) and tried to get through, he talked to Derek. He said put me back on, I think you need to call an ambulance’

Derek, 52, was taken into hospital on March 30 and remained in an unresponsive condition.

Kate and her children isolated at home after she displayed ‘mild symptoms’.

‘I’m afraid he is still in a deeply critical condition, but he is still here, which means there is hope.’

Kate said: ‘The journey for me and my family seems to be far from over as every day my heart sinks as I learn new and devastating ways this virus has more battles for Derek to fight.

That month, Kate and her family took part in the final clap for carers

She said: ‘I’ll never give up on that because Derek’s the love of my life but at the same time I have absolute uncertainty’

On June 5, Kate revealed Derek is now free from coronavirus but continues to fight against the damage inflicted on his body

On July 5, Kate revealed Derek has woken from his coma but he remains in a serious yet critical condition.

On July 8, she announced she would be returning to GMB, after being urged by doctors to ‘get on with life’ during Derek’s recovery.

She added that Derek had ‘opened his eyes’ after waking from his coma, but has been told his recovery could take years.

On July 13, Kate returned to GMB for the first time since Derek was hospitalised. 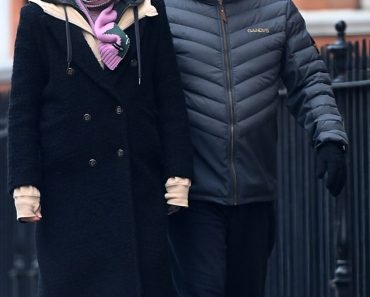 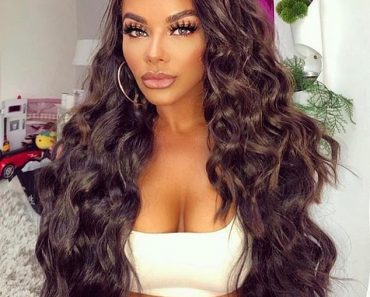 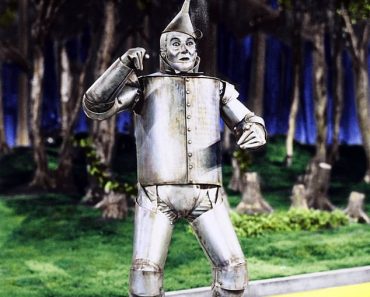 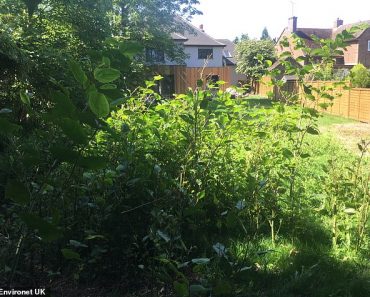