She is currently in Wales filming the first UK series of I’m A Celebrity: Get Me Out of Here.

But Giovanna Fletcher still managed to surprise her children ahead of her first scenes in the ITV show on Sunday.

The author, 35, has bid farewell to her family for three weeks after setting off for Gwrych Castle in Abergele, but managed to leave them a sweet treat in the form of a box of brownies.

Thinking of you: Giovanna Fletcher surprised her three children with a sweet treat the evening before the much-anticipated I’m A Celebrity launch show is set to air on Sunday evening

Giovanna’s husband Tom shared an adorable video of their three sons gathering around to open the unexpected gift on his Instagram page on Saturday evening.

As his brother read out the note, four-year-old Buddy yelled ‘cake’ in excitement as he tried to guess what is in the mystery box.

But their younger sibling Max, two, seemed less interested in the touching present, hilariously putting on a pair of sunglasses upside down and toddling away instead. 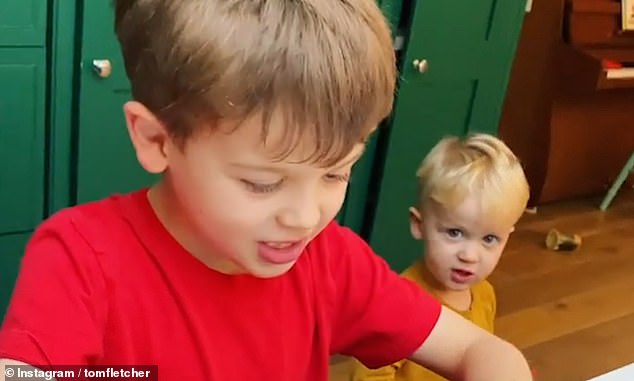 Surprise! Her husband Tom shared a video of their three sons (above, Buzz, six, and Max, two) gathering around to open the unexpected gift on his Instagram page on Saturday evening 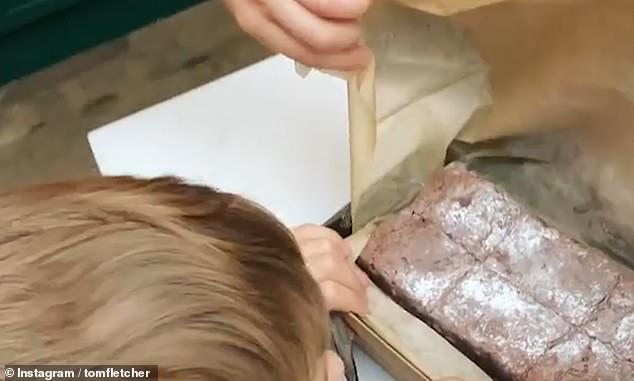 Thanks! The boys delightedly grab the tasty brownies, with Tom, 35, reminding them to say ‘thank you Mummy’ as they tuck straight in

The boys then open the box and delightedly grab the tasty brownies that were waiting inside for them, with Tom, 35, reminding them to say ‘thank you Mummy’ as they tucked straight in.

Alongside the sweet clip, Tom penned: ‘Well, @mrsgifletcher might be sleeping on the cold, damp floor of a (probably) haunted castle but she’s still looking after us!

‘I was on the fence before but she’s definitely got my vote now. #teamgi #imaceleb’

The McFly star then shared another humorous snap showing himself holding up a piece of delicious brownie as he admitted he desperately ‘needed this brownie’.

He captioned the picture: ‘I’ve never needed anything as much as I needed this brownie today.’ 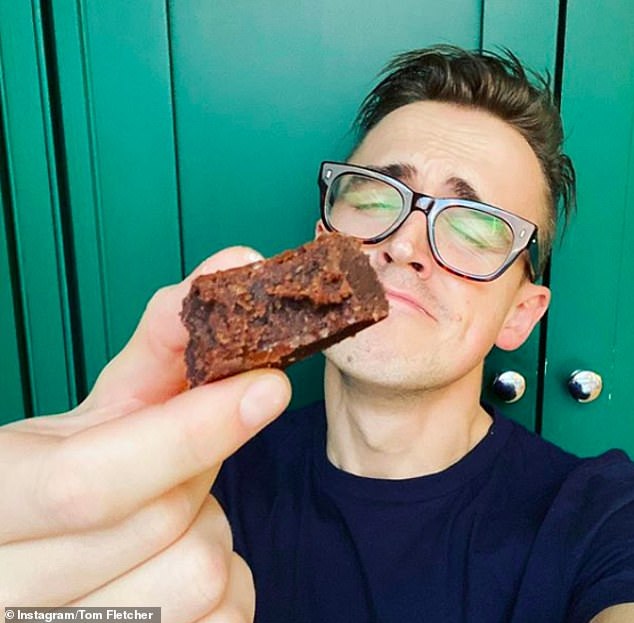 Tasty! McFly star Tom shared another humorous snap showing himself holding up a piece of delicious brownie as he admitted he desperately ‘needed this brownie’

Giovanna is among ten celebrities joining the first ever UK series of I’m A Celebrity this year, after coronavirus saw the show relocate to Wales from Australia.

Speaking to MailOnline ahead of the launch, she previously admitted that while she gave up caffeine for the series, she was worried how she’ll cope with camp food shortages as she gets ‘a bit tetchy’ when she’s hungry.

But she added that she feels ready to take on the day-to-day challenges of living in the castle, including the infamous ‘dunny’ – which this year has been swapped for an outdoor privy in keeping with the new castle setting.

She said: ‘In terms of camp life I think I’ll be fine, I’ve camped, I’ve done things like that before so I don’t feel like that, we’re gonna get hammocks so that will be nice. 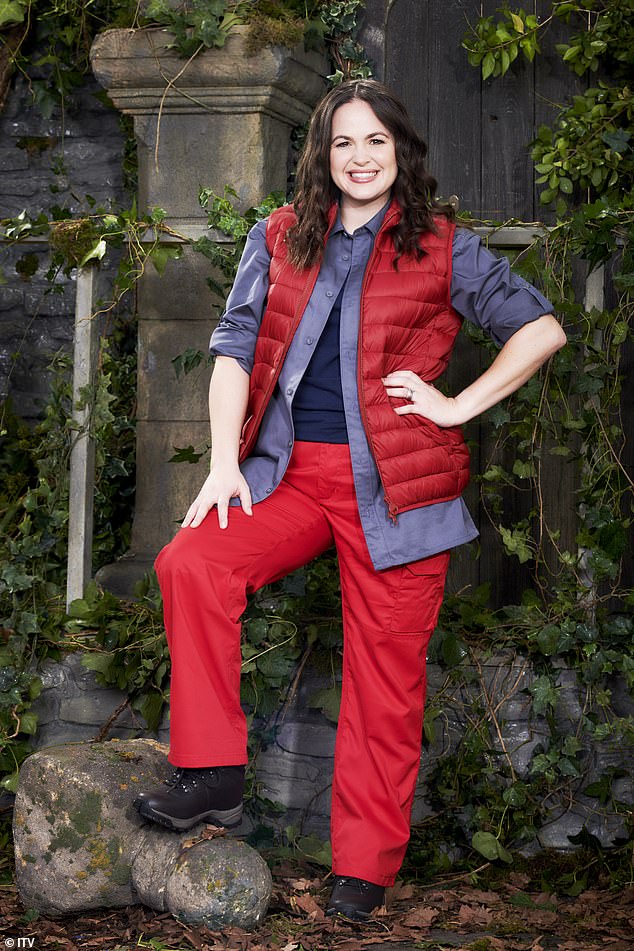 I’m A Celeb: Giovanna is among ten celebrities in the first ever UK series of I’m A Celebrity: Get Me Out of Here, after COVID-19 saw the show relocate to Wales from Australia

‘I’ll be interested to see what kind of role I’ll take on in the camp. I’ve been told to do the toilet on day one and not day four, as on day four the rice and beans have taken their toll.’

The presenter said she’d she asked Tom’s bandmates Dougie Poynter and Matt Willis for advice on how to tackle the show, as they were both series champions, but got mixed results.

She told MailOnline: ‘Dougie didn’t really give me any advice, but Matt was really excited AND HIS advice was to go in and be yourself and have the best time ever!

‘You can’t guess what’s gonna happen and react to things so you’ve just got to go in and it’s really hard and that’s part of the experience. So the general advice is to go in and have fun.’ 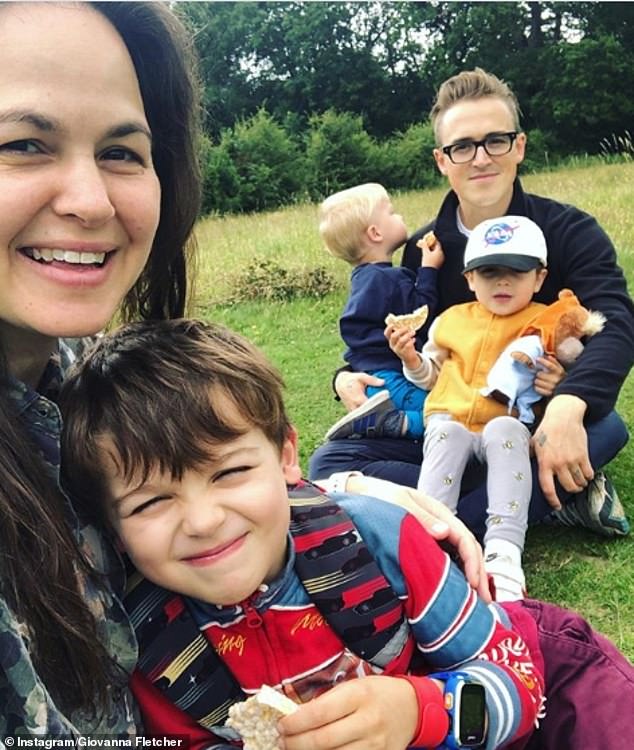 I’m A Celeb: The author has been separated from her sons Buzz, Buddy, four, and Max, after setting off for Gwrych Castle in Abergele, North Wales for the hit series

Also competing for the title of King or Queen of the Castle will be AJ Pritchard, 26; Shane Richie, 56; Jessica Plummer, 28; Victoria Derbyshire, 52; Hollie Arnold, 26, and Jordan North, 30.

Ant McPartlin and Declan Donnelly will host the series once again, while Vick Hope will be fronting The Daily Drop, a brand-new series following all camp activity, available on ITV Hub every morning after the main show.

The Geordie duo, the contestants and crew will be tested for COVID-19 every three days throughout the series, with the campmates able to mix freely while they live in the camp as they form their own bubble.

The 2020 series, which starts on ITV on Sunday evening, is expected to last 20 days – two shorter than normal.

Claim to fame: The most successful British track athlete in Olympic Games history

Phobias: Any animal that moves

Biggest misconception you want to dispel in the castle: It will be nice for people to see me doing something other than running

Role in the camp: Cook

Miss most: Coffee, my wife and children

Phobias: Human faeces. If I see one, it is over! I am hoping the camp toilet will be enclosed

Biggest misconception you want to dispel in the castle: Nothing. I don’t think I am that interesting

Role in the camp: Person who will muck in with anything

Miss most: My family and routine at home

Biggest misconception you want to dispel in the castle: People think I am glamorous as I have played Liz for so long but I am not

Role in the camp: Cleaner

Miss most: Dogs and my husband, Jon

Dream campmate: Ricky Gervais – he would keep us all going

Biggest misconception you want to dispel in the castle: People see me with sparkles and fake tan but nobody knows what I am like

Role in the camp: Keeping spirits up and the cleaner

Miss most: My warm and comfy bed

Dream campmate: Any celebrity with an intriguing background

Biggest misconception you want to dispel in the Jungle: I think I have always been the same throughout my career – so I don’t have any.

Role in the camp: Person to keep spirits up.

Miss most: My family.

Dream camper: Anybody who has won the Super Bowl!

Phobias: I am not a fan of spiders or confined spaces and I don’t know what I am going to be like when I get there!

Biggest misconception you want to dispel in the castle: I don’t think I have any as people just know me as the news and current affairs person!

Role in the camp: Shoulder to cry on.

Miss most: My boys, husband, dog and Mum.

Dream campmate: Madonna, Gary Lineker and Jamie Oliver to cook for us. I think you could have some really geeky chats with them!

Claim to fame: Author and podcaster

Phobias: Heights. My legs go wobbly and you can’t rationalise it

Biggest misconception you want to dispel in the castle: I am not that controversial so nothing

Role in the camp: Mum, friend and the giver of hugs

Miss most: My husband, Tom, and my three children

Dream campmate: The Queen, Judi Dench and Ant Middleton so he can help us with all the survival skills

Phobias: Arachnophobia, fear of heights –just about every phobia

Biggest misconception you want to dispel in the castle: It will be nice for people to see me for who I am rather than my EastEnders character

Role in the camp: Chatterbox and little sister

Miss most: My daughter. It’s going to be the longest we’ve been apart

Dream campmate: Denzel Washington would be awesome. I would listen to every word he said

Phobias: It’s just easier to say what I am not scared of. I have so many phobias

Biggest misconception you want to dispel in the castle: On my Radio 1 show, I am always bubbly and energetic but everyone has down moments too, so it will be nice for people to see what I am really like

Role in the camp: Entertainer and the tidy up person –I love a tidy house

Miss most: A nice cool pint of Guinness

Dream campmate: Barack Obama and Liam Gallagher. He would be great entertainment value

Biggest misconception you want to dispel in the castle: I don’t want it to focus on my disability

Role in the camp: Cook/shoulder to cry on

Miss most: My boyfriend, food and my cats 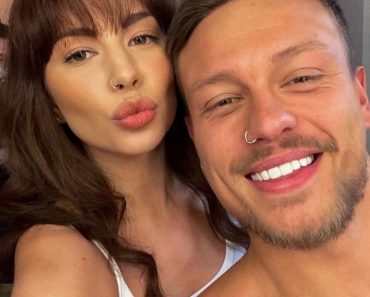 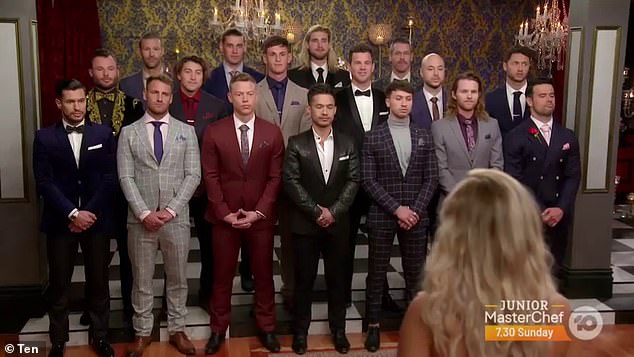 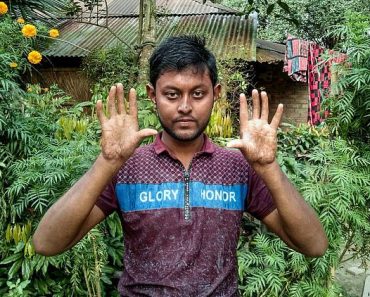 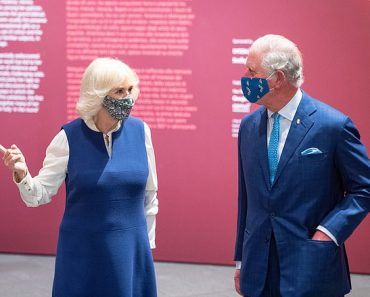