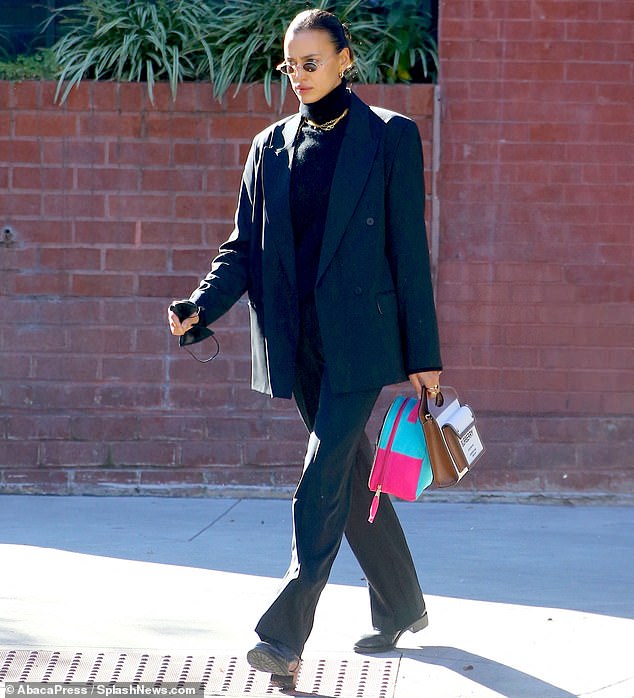 Supermodel Irina Shayk has no shortage of stylish outfits.

On Friday the 34-year-old stunner put on an effortlessly chic display in a black pant suit as she walked in the West Village.

Looking like a true New Yorker in the city’s preferred hue, she looked smart and sophisticated.

Timeless: Irina Shayk, 34, looks sophisticated as she strolls around the West Village in a timeless black suit and turtleneck before picking up her daughter Lea

In a timeless outfit that could be worn for any occasion, the Russian-born beauty looked snazzy as she walked.

Layering a classic black turtleneck under the ensemble she dressed up the outfit with a gold necklace over her sweater.

Throwing on a pair black boots she strutted around before picking up her two-year-old daughter Lea. 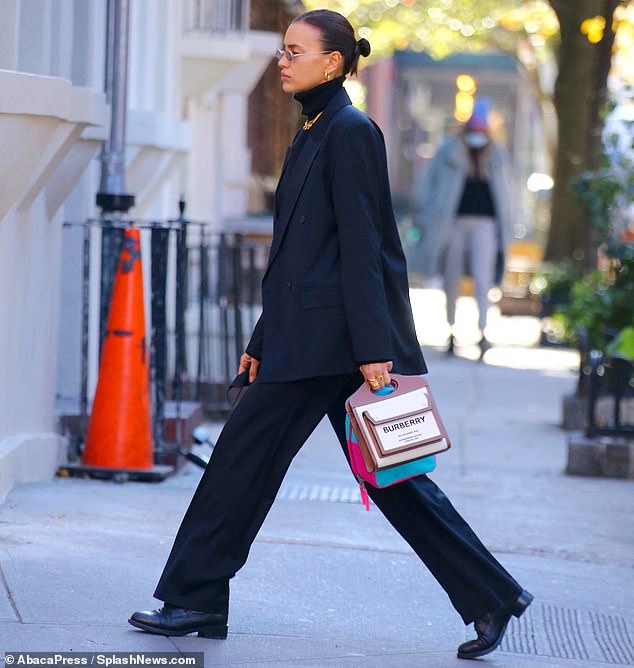 Snazzy: Looking ready to command the streets and the boardroom at the same time Irina looked sharp

With her hair slicked back into a bun, Irina added to the no fuss look that featured a pair of statement sunglasses.

Holding a face mask in one hand and a brown and white Burberry purse in the other, she added a hint of tone to the minimalist look.

Knowing her daughter all too well she carried a lunch box in hand as she walked to retrieve her tot. 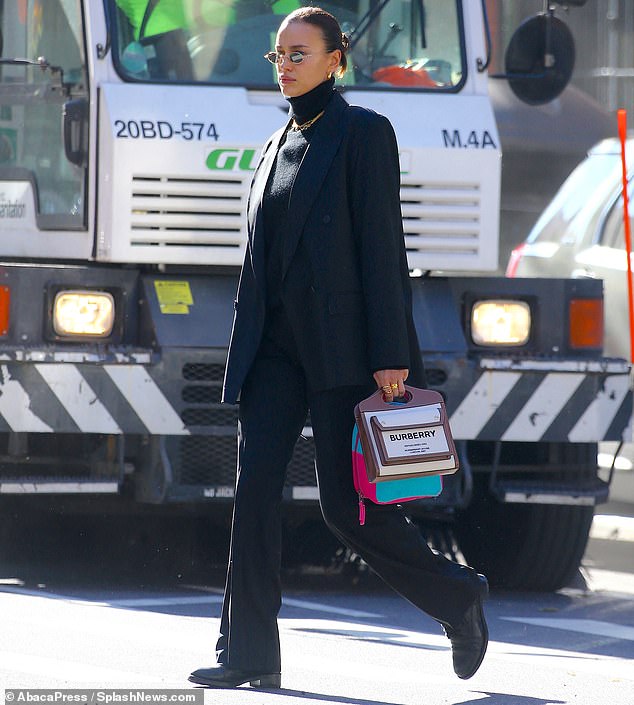 Mother’s instinct: Knowing  daughter Lea all too well she carried a lunch box in hand as she walked to retrieve her tot 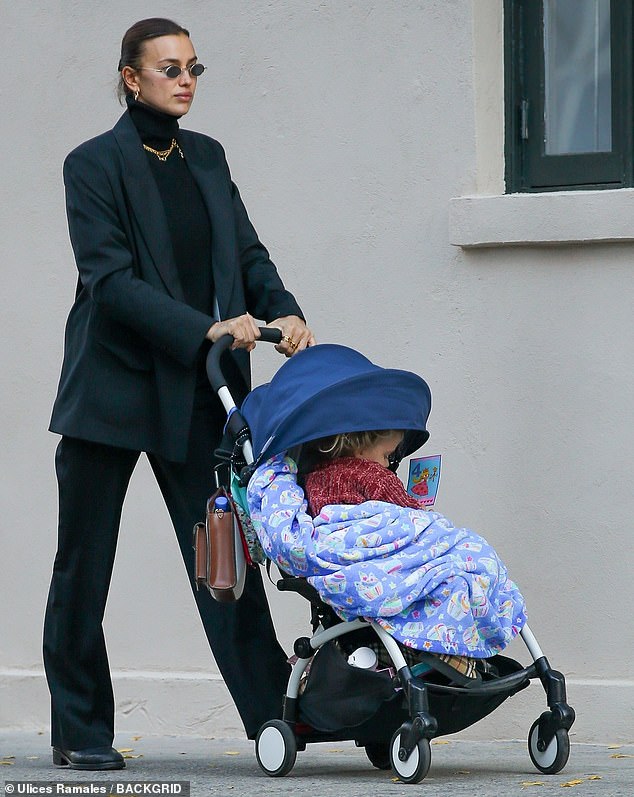 In the zone: Lea kept herself occupied as she looked at a colorful book while wrapped in a blanket

Opting for Burberry just like her mom, the brand’s signature pattern could be seen poking out from under a blue blanket adorned with unicorn cupcakes.

Lea kept herself occupied as she looked at a colorful book as Irina pushed her in a stroller.

With the holiday season in full swing, Irina announced yesterday that she was gracing the cover of luxury department store Bergdorf Goodman’s holiday issue.

Dressed in full Oscar de la Renta, she was excited to be their muse as the issue is celebrating designers with charitable initiatives. 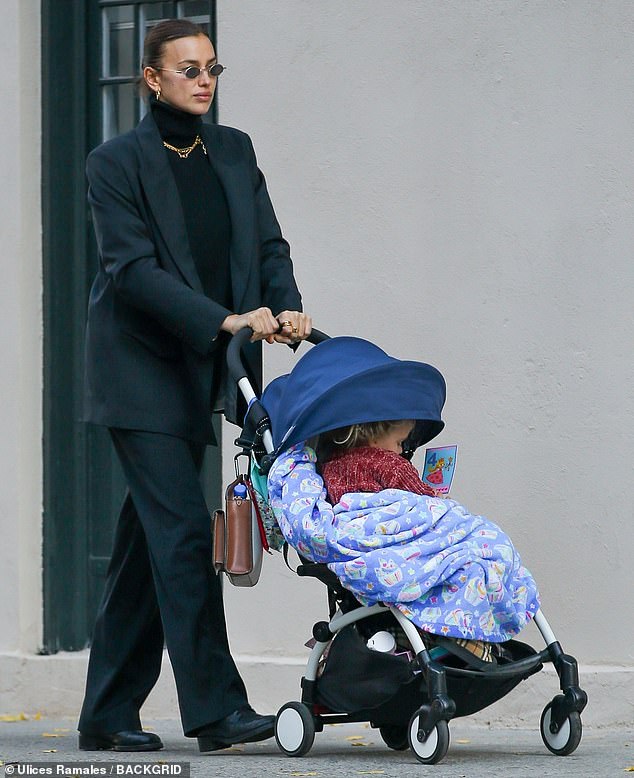 Irina has her own passion project, frequently contributing both time and money to the Food Bank for New York City.

Speaking about her involvement with the organization which has ramped up since the pandemic, the charitable model said, ‘As New Yorkers we look where we can to help.’ 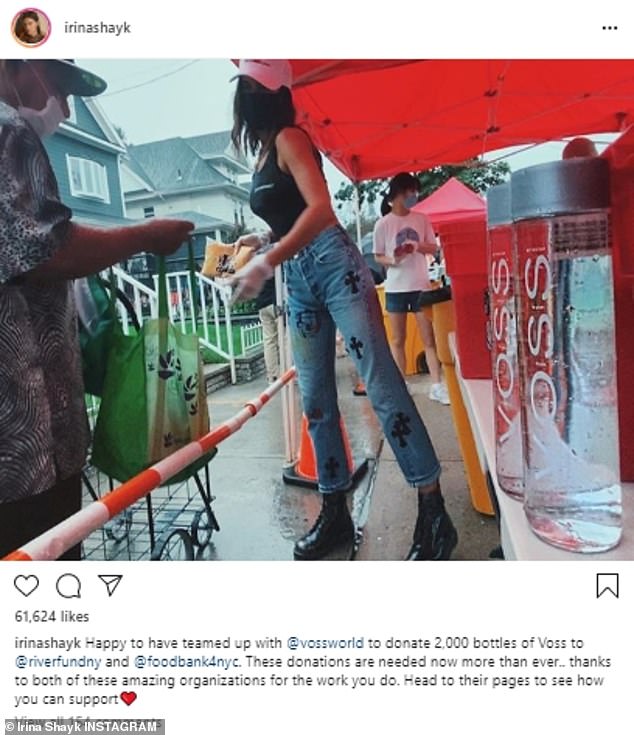 Giving back: Irina’s involvement with the Food Bank NYC has ramped up since the pandemic, as Irina spoke about the importance of helping others; pictured August 21st