She’d been making the most of summer and autumn with sun-soaked getaways, including a luxury trip to Dubai.

But Megan McKenna was spotted living it up much closer to home on Thursday night, when she dined with a pal at Sexy Fish in the London district of Mayfair.

The former TOWIE star, 28, caught the eye in a PU ensemble from her In The Style range, which included a green utility shirt and black high-waisted trousers.

Night on the town: Megan McKenna, left, was was spotted dining with a pal at Sexy Fish the London district of Mayfair on Thursday night

Standing tall in a pair of black boots, the TV personality wore her brunette locks in a sleek bun, while she accessorised with oversized hoop earrings.

Highlighting her good looks with a light dusting of makeup, Megan held hands with her friend as they laughed and chatted while making their exit out of the eatery.

As they enjoyed their evening out, Megan took to Instagram to share snapshots of her ensemble and the food and drinks that they indulged in.

Last month, Megan was seen out walking her dog Daisy, days after she returned to Essex following her holiday to Dubai. 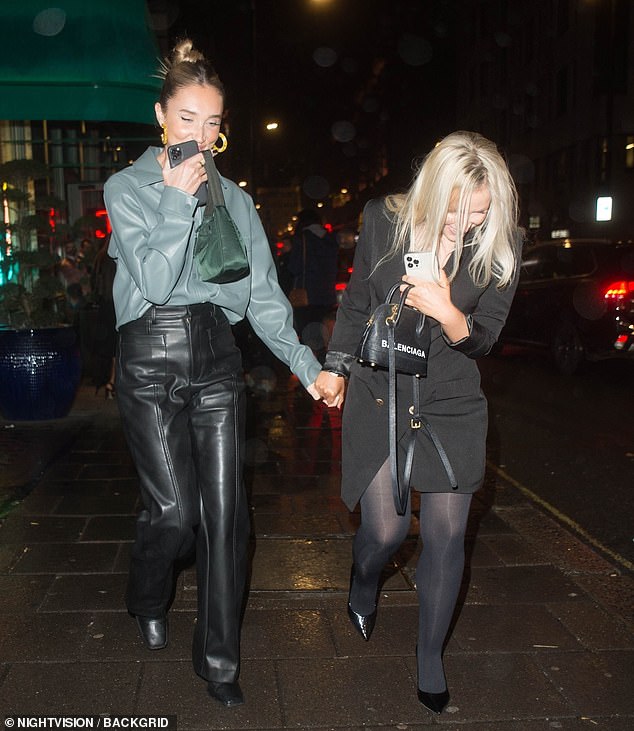 Ensemble: The former TOWIE star, 28, caught the eye in a PU ensemble from her In The Style range, which included a green utility shirt and black high-waisted trousers 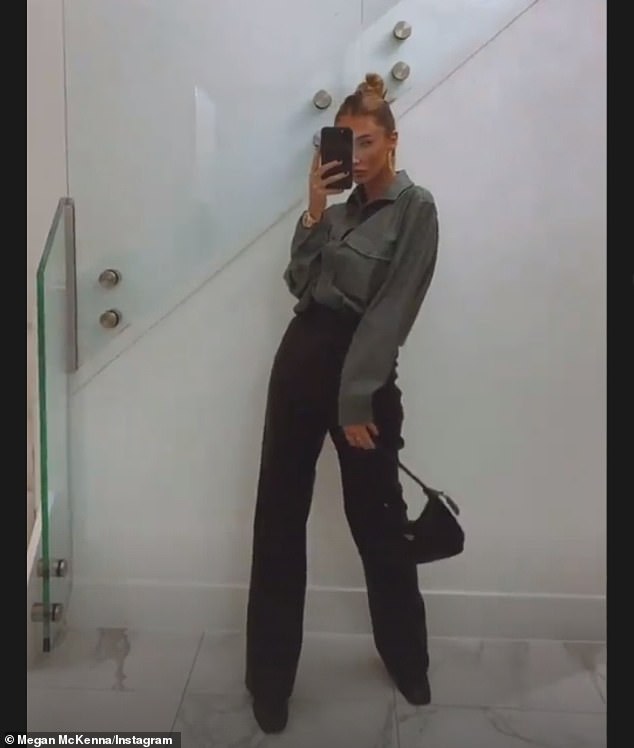 Take a look: She took to her Instagram Stories to show off her outfit of choice to her followers

After travelling back from Dubai, residents in England are required to isolate in their homes for two weeks and can only exercise in their home or garden.

The government website advises that people should not leave their homes to walk their dogs and must ask friends or relatives for assistance.

MailOnline contacted Megan’s representative at the time for further comment.

Prior to returning home, Megan had been sharing bikini snaps from her trip, including one of herself in a green holographic bikini while holidaying at The Westin Dubai Mina Seyahi Beach Resort and Marina. 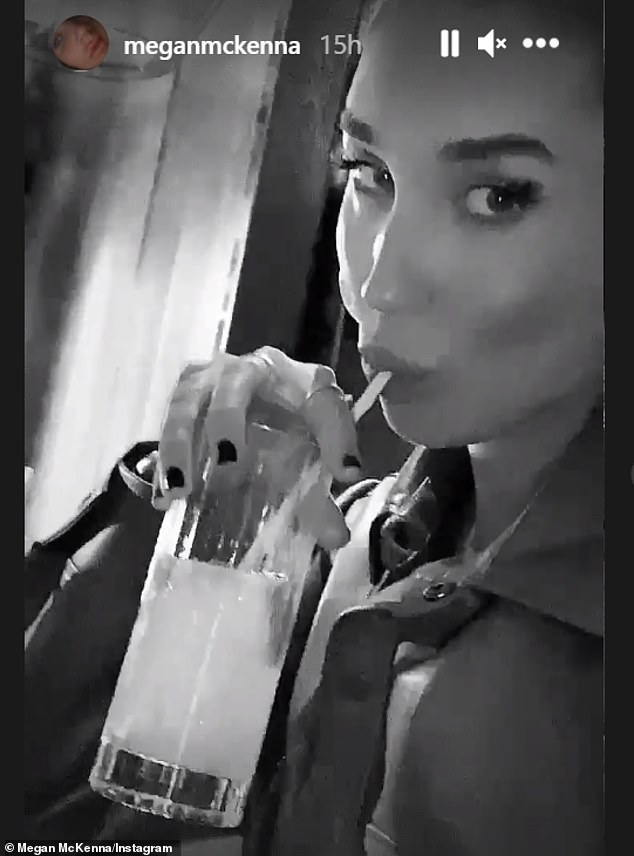 Sip: As she enjoyed her night inside the eatery, she shared footage of herself enjoying a drink 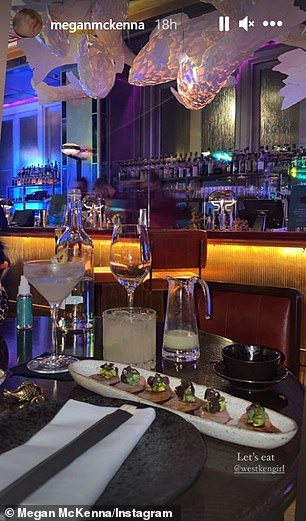 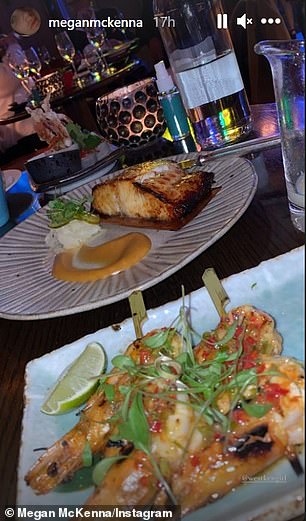 Yum: She also shared snapshots of the food and drinks that they indulged in during the night

She showed off her toned, bronzed pegs in the snap as she posed with Dubai’s impressive cityscape in the background.

The brunette bombshell opted for a natural look as she shielded herself from the balmy sunshine in the United Arab Emirates beneath a white, wide-brimmed hat.

Alongside the snap, she wrote: ‘Mornings never felt so good.’

She had not shied away from sharing racy snaps during her lavish Dubai getaway, where she stayed in a luxury five-star hotel. 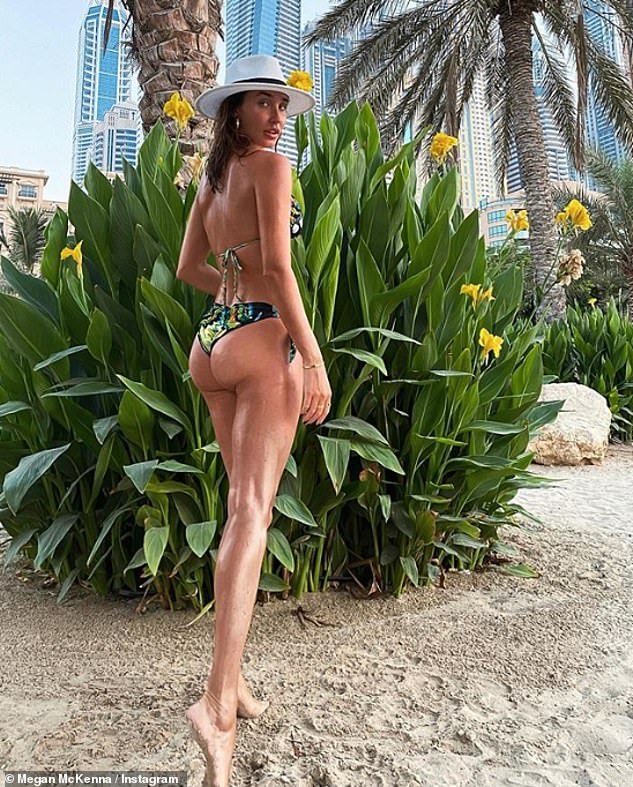 Sun-kissed: Back in November, Megan shared bikini snaps from her trip to sun-soaked Dubai 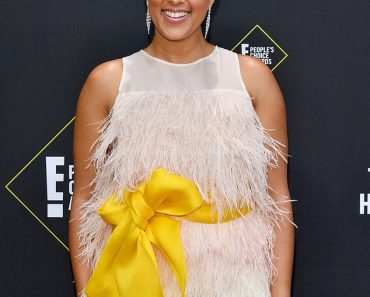 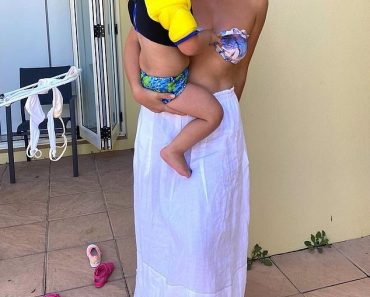 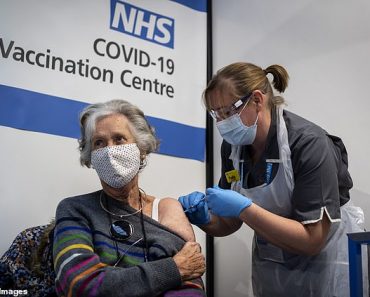 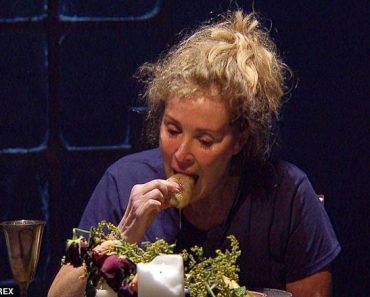 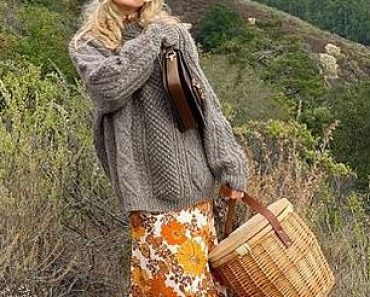 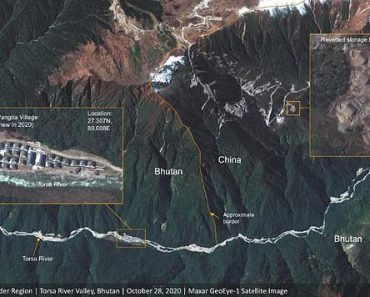