Home
News
Couple get rid of ninety-five per cent of their belongings to pay off $20,000 debt
Prev Article Next Article

A couple are raising their two-year-old daughter in the back of a converted bus after swapping their three-bedroom rental home for a life on the road.

Will Watson, 32, and Kristin Batykefer, 30, of Jacksonville, Florida, bought a 1992 retired Air Force bus and spent $30,000 converting it into a mobile home, complete with a fully functional kitchen, bathroom and living room.

The couple sold and donated ’95 per cent’ of their belongings – earning enough money to pay off Kristin’s $20,000 student and credit card debt – and set off on their adventure in April 2019, when daughter Roam was just six months old.

They have since clocked up 30,000 miles travelling across the US and Canada.

Both Mark, who has his own video production and marketing company, and Kristin, who is a marketing manager, are able to work on the road, allowing them to continue earning money while travelling.

Will Watson, 32, and Kristin Batykefer, 30, from Jacksonville, Florida, have converted a bus into their dream home. Pictured: Will and Kristin with their daughter Roam, two 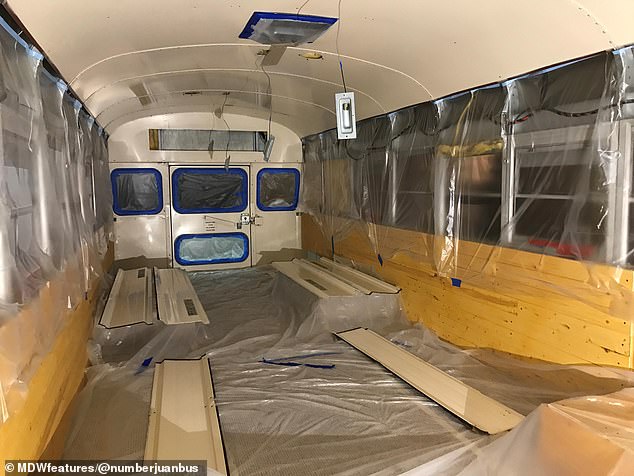 The couple who met at work in 2013, yearned for adventure while living in a rented three-bedroom house and working from home. Pictured: The bus before the conversion 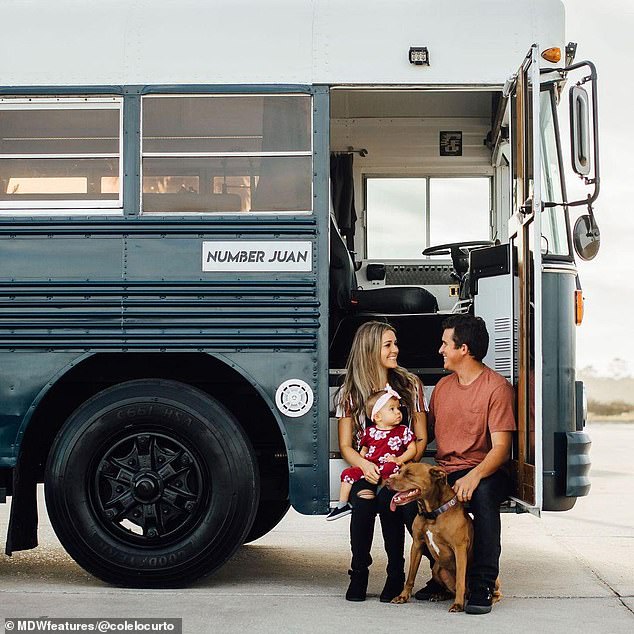 Will and Kristin sold and donated 95 per cent of their belongings to downsize for a minimalistic lifestyle, where they’re able to explore new places. Pictured: The couple and their daughter 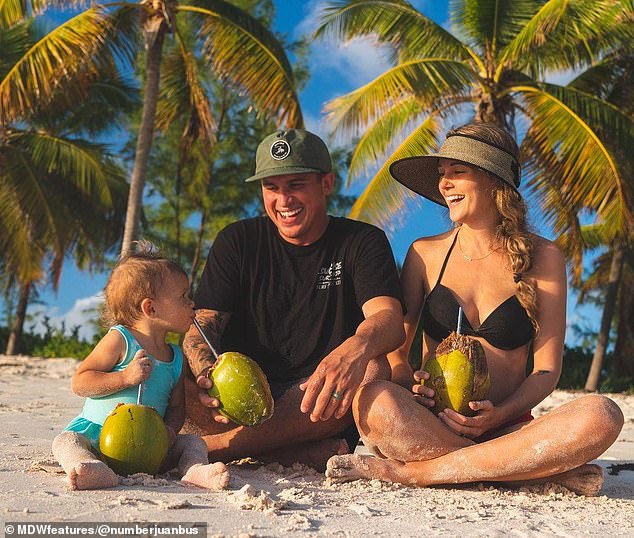 Although the family, who also have an eight-year-old Pitbull named Rush, have no plans to stop traveling, they will reassess when Roam reaches school age.

Kristin said: ‘Before living on the bus we lived a few blocks from Jacksonville beach in a three bedroom house. We loved our life but wanted more adventure.

‘We both were working from home and traveling a lot for work (same jobs we have now) and we felt like it just made sense to make the jump to travel around in a converted bus.

‘The freedom of being able to go and experience all the beautiful nature in our country. We wanted to see as much as we could and felt like this was the best way to do it.’

The couple spent 18 months before working on the bus, transforming the ‘blank space’ into their ‘dream home’.

Kristin continued: ‘It was a part time effort and during that time we both worked full time, we also got engaged, married, and had a baby. We were really busy, and it was a lot of work but totally worth it. 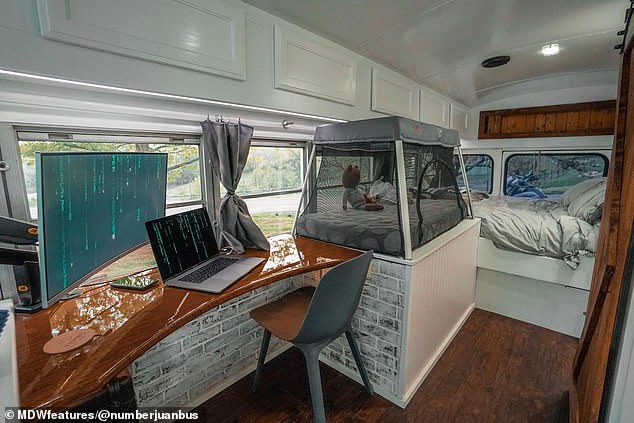 The family began the adventure in Florida and went up the east coast to Nova Scotia, Canada, racking up almost 32,000 miles in two years. Pictured: The bus’s bedroom and office area 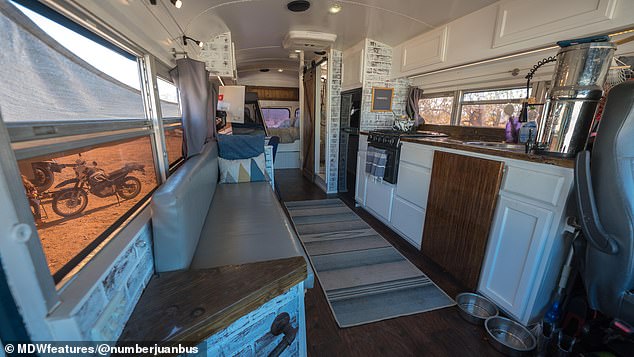 The pair spent $30,000 on converting a 1992 retired Air Force bus which they have affectionately named Juan. Pictured: inside the bus after conversion 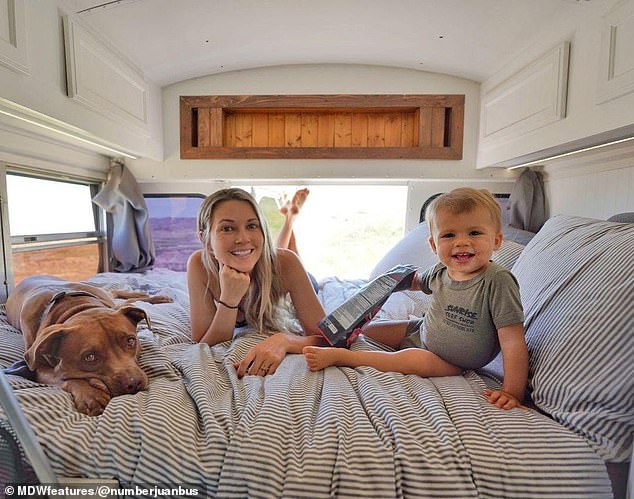 Kristin paid off $20,000 of university and credit card debt, however they aren’t sure how much money they raised from selling their belongings. Pictured: Kristin and Roam with dog Rush 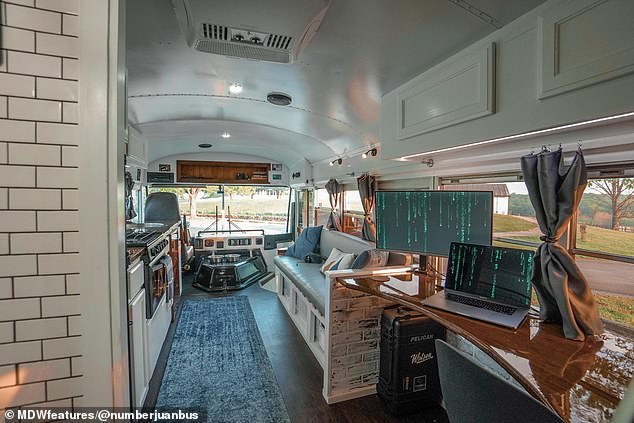 Kristin revealed they have kept the same jobs since making the decision to live in a converted bus. Pictured: Inside the converted bus

‘We wanted to have all the comforts of home, since this was going to be our full-time home. We have a kitchen, with stove and oven and a big fridge. We have a bathroom with a toilet and a shower.

‘We have office space for both of us and we have a bedroom area for all of us as well as a living room area. Not feeling like we were going “without” was important to us, and we have never felt that way in our almost two years of bus life.’

Their journey started in Florida, travelling down to the Florida Keys and then up the East Coast to Nova Scotia, Canada. Next they headed back to Florida for winter and continued north to the mid-west.

‘Our goal for this summer was to travel to Alaska and explore more of Canada on the way there,’ Kristin continued. ‘However, with all that happened the borders were shut down and traveling to Alaska didn’t make sense.

‘We are hoping that the borders will reopen the summer of 2021 so we can go to Alaska, but if not, we will explore the states in the center of the United States.’ 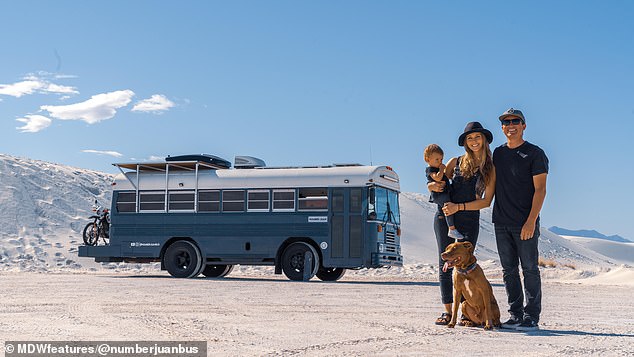 Kristin and Will have no plans to stop their adventure but will re-evaluate once Roam reaches school age. Pictured: The family and their dog 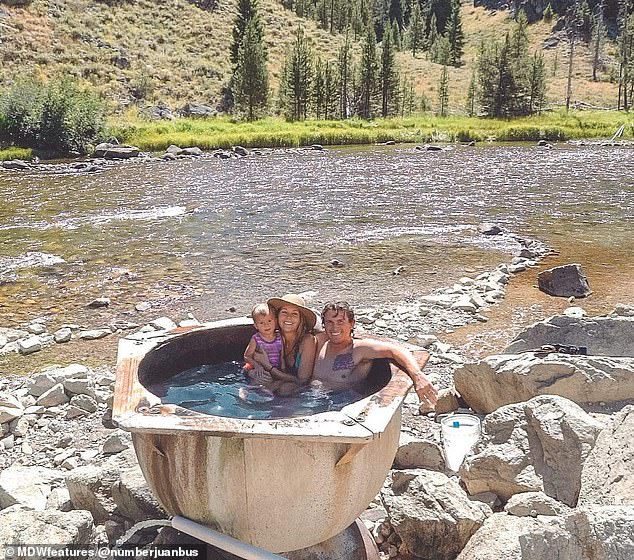 Kristin said they felt living in a converted bus would be the best way to get the freedom to explore the U.S. Pictured: The family on one of their adventures 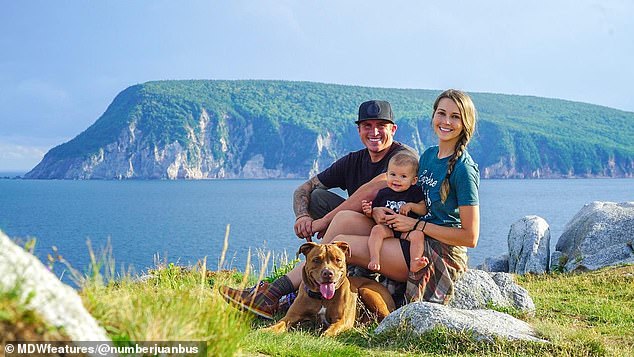 Kristin said it took about 18 months to finish renovating the bus because it was a part-time effort, while they continued working full time. Pictured: The family in Nova Scotia 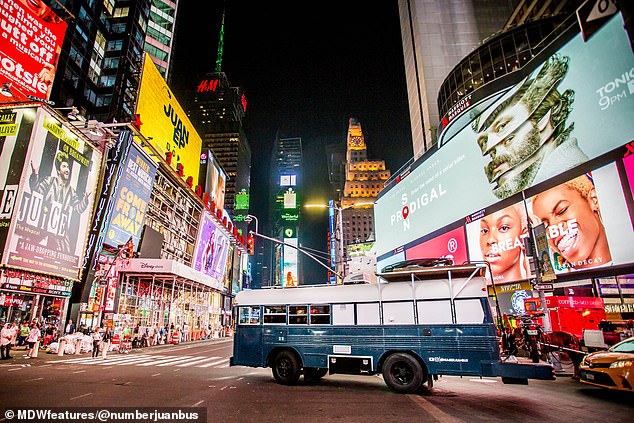 The couple have all the comforts of home on their bus  (pictured) including a kitchen with a stove and oven, as well as a bathroom

While it has been an amazing experience, the family have also encountered issues on the road.

‘This life is an adventure and the old saying goes “it’s not a real adventure until something goes wrong”,’ Kristin said. ‘We’ve had engine issues, trouble finding places to stay for the night, ran out of fuel in the middle of nowhere, and many of other little lessons along the way.

‘Will is very handy and so far he has been able to fix any issues – engine or building wise that we’ve encountered.’

Meanwhile toddler Roam has only known a life on the road and ‘loves hiking and is a great adventure baby’.

Kristin added: ‘The best part about traveling this way is that we always have everything we need with us. We don’t have to pack to go somewhere new and we don’t have to worry about leaving anything behind. 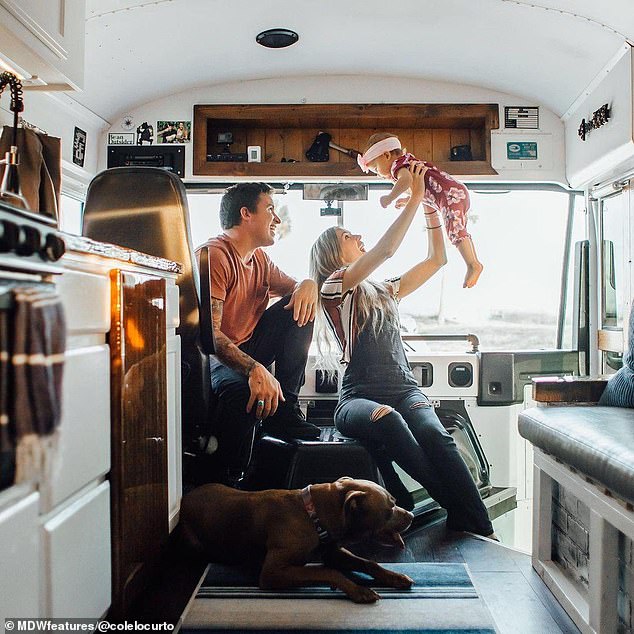 Kristin said they’ve never felt like they’re going ‘without’ during their almost two years of bus life. Pictured: The family in their bus 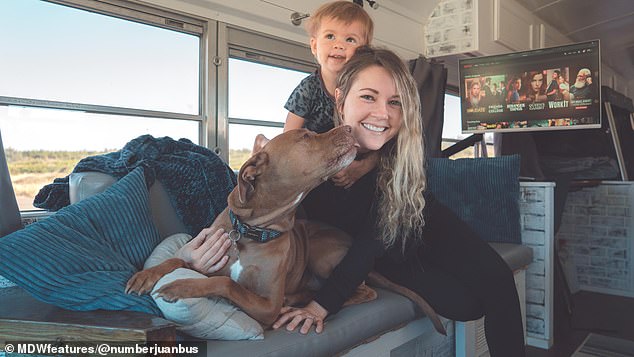 Kristin said they may continue travelling and home-school, when their daughter reaches the age to start education. Pictured: Kristin and Roam with their dog 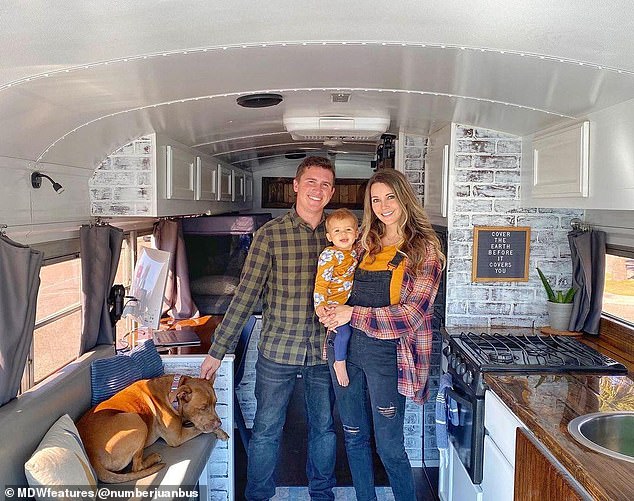 Kristin said going against what is considered ‘normal’ by society is scary, however she encourages those thinking about it to take the leap. Pictured: Will, Kristin and Roam

‘Becoming minimalists has changed our lives so much, for the better and allowed us to have the freedom to live this lifestyle and to save money for the future.

‘Going against what is considered ‘normal’ by society can be scary, but if you can find the courage to make the leap, it will be totally worth it.

‘Even if you try it and decide you hate it, at least you will never have to look back later in life and wonder “what if?”.

‘If you want to do bus life, go for it. We believe that doing the research and taking the time to make sure you do it right the first time is a really smart path to take on your journey to bus life.’

Whilst the coronavirus pandemic has disrupted some of their travel plans this year, Kristin and Will are pleased that they have been able to raise Roam on the road. 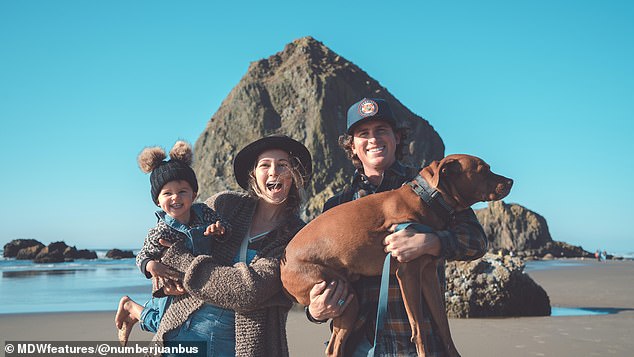 Kristin said life on the road ‘is a dream come true’, despite having had engine issues and trouble finding places to stay for the night 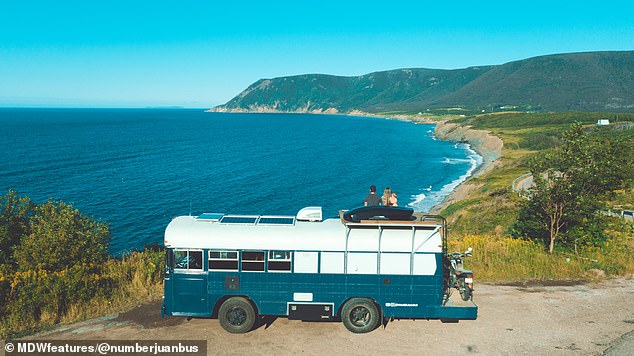 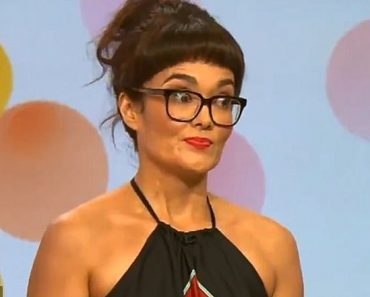 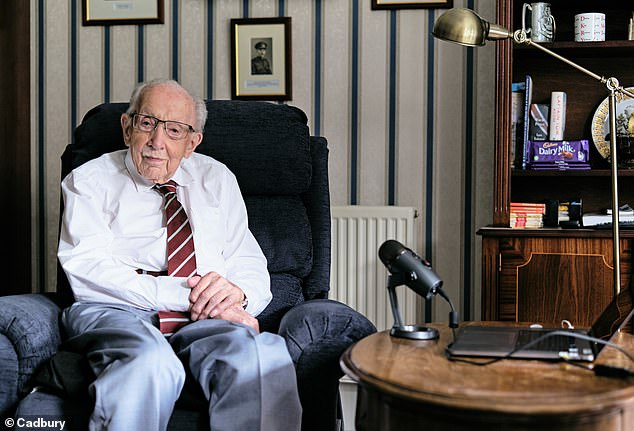 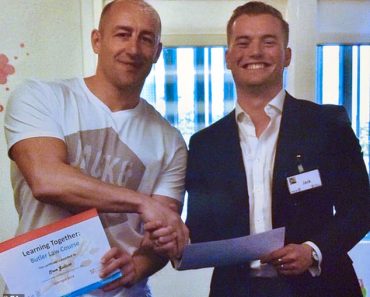 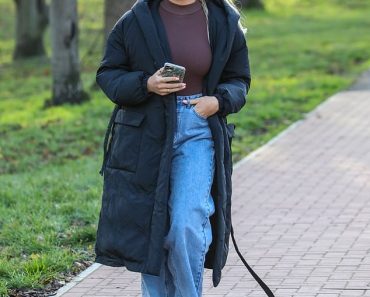