As a young man, George Szell worked with Richard Strauss… all that understanding is here, translated into remarkable performances

By David Mellor for Event

This better-late-than-never Warners box, drawing on original EMI recordings, celebrates the recorded legacy of the Hungarian/American conductor George Szell. Szell died 50 years ago this summer, having spent the final 25 years of his life turning the Cleveland Orchestra into arguably the world’s finest.

Szell, like Arturo Toscanini, was a tyrant who wouldn’t be tolerated today. But his often cruel rehearsal methods yielded wonderful recordings, which, unlike Toscanini, frequently sound warm and relaxed, like the outstanding Dvorak Eighth here, recorded only three months before he died.

It’s a back-handed compliment, but some of the most memorable recordings feature great soloists such as David Oistrakh in the Brahms Violin Concerto, and the Brahms Double, where he is joined by Mstislav Rostropovich, with predictably first-rate results. 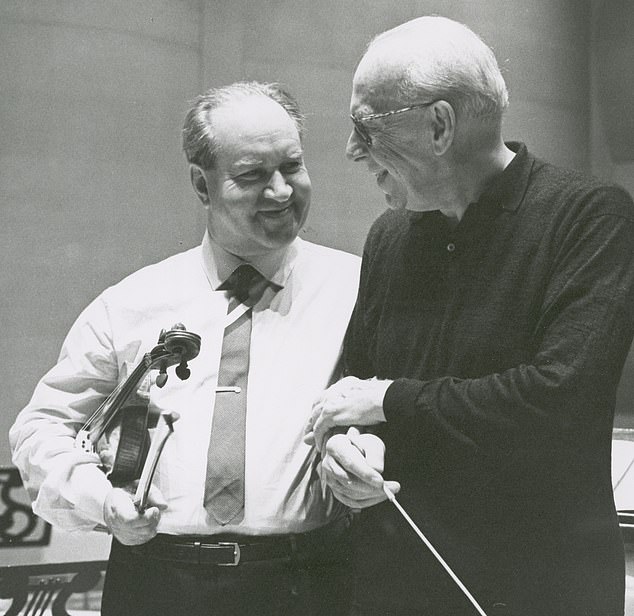 It’s a back-handed compliment, but some of the most memorable recordings feature great soloists such as David Oistrakh (pictured with George Szell, above)

A year earlier, Szell set down a complete Beethoven Piano Concerto cycle with Emil Gilels, one of the great pianists of the 20th Century and, for me, even finer than his legendary Soviet contemporary, Sviatoslav Richter.

But maybe the most memorable of the lot comes from Szell’s earlier years in Europe; perhaps the finest account on record of Dvorak’s Cello Concerto, set down in 1937, with the Czech Philharmonic and the legendary Pablo Casals.

Casals played for Queen Victoria in 1899, and for John F. Kennedy in 1961. In the course of his stellar career he never did anything finer than this recording, where his virile tone and superb phrasing create an unforgettable impression, especially since Casals eschews all the scoops and swoops string players of that period so often indulged in.

Also top class are three albums made in London in the mid-1960s with the London Symphony Orchestra, who Szell especially tormented in rehearsals.

The Mahler songs with Dietrich Fischer-Dieskau made such an impression on the soloist that he devoted six pages of his memoirs to Szell.

As a young man, Szell worked with Richard Strauss, who was as good a conductor as he was a composer. All that understanding is here translated into remarkable performances of a host of Strauss songs, including the Four Last Songs, with Elisabeth Schwarzkopf an exceptional soloist.