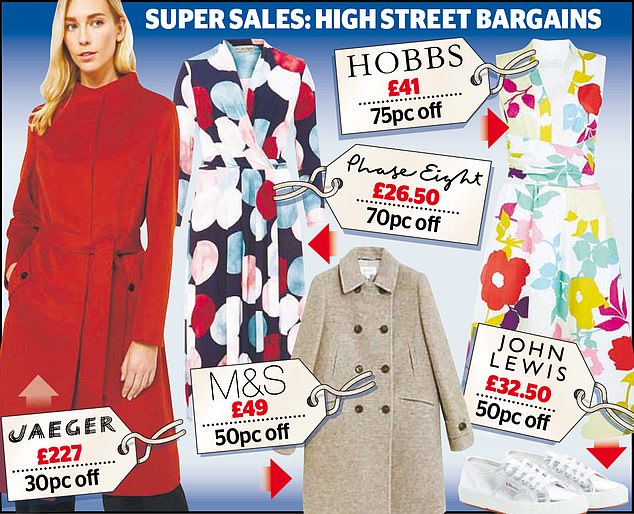 By Tom Witherow For The Daily Mail

Shoppers will find ‘wall-to-wall’ discounts in the January sales as the High Street suffers its ‘biggest stock hangover ever’, experts have said.

The disruption caused by the pandemic has left bricks and mortar businesses struggling to shift their products.

Many will cut prices even further as they try to rake in cash to tide them over until spring.

Bargain: Shops in Tier Four areas are losing millions of pounds of sales each week after being forced to close

Shops in Tier Four areas are losing millions of pounds of sales each week after being forced to close.

Boxing Day saw a 60 per cent decline in footfall compared with the same day last year, rising to a 76 per cent fall in Tier Four places where non-essential shops are shut, Springboard said. This came on top of £8billion of lost sales when ‘non-essential’ retail was shut in November, and experts said even heavy discounting in December and 24-hour trading were not enough to clear stock.

Retailers such as Next and Primark were already ‘hibernating’ mountains of spring and summer clothes that were not sold during the first lockdown, to be marketed in 2021. Independent retail analyst Richard Hyman said: ‘Clothing retailers will go into 2021 with the biggest stock hangover that they’ve ever seen.

‘They’re going to have to cut prices hugely to have any chance of shifting their stock. We’re going to see wall-to-wall discounting.’ Andrew Busby, founder of Retail Reflections, said: ‘It’s very likely there was a stock glut after the November lockdown. Chains have had to second guess what restrictions there will be.

‘There’s so much uncertainty, how on earth are retailers able to plan. It’s a complete nightmare knowing what stock to have where. Sales and cash are more important than ever – whatever cash you can get, you take. There will be more sacrificing margin than ever before.’

Retailers made decisions about stock in the early summer when the country was emerging from the first lockdown, and there was more optimism.

Many shops expected a second wave in the autumn, but the early success of social distancing measures in supermarkets meant they did not expect another national lockdown. Just days before the November shutdown in England was enforced, FTSE 100 giant Next published a ‘downside’ scenario based on just two weeks of closure.

The glut of clothes led to a rash of heavy discounting in December, especially in fashion chains. Phase Eight offered customers 50 per cent off, while M&S and John Lewis were giving 30 per cent off in deals once reserved for the January sales.

These discounts have been extended after Christmas with chains offering up to 75 per cent off some items.