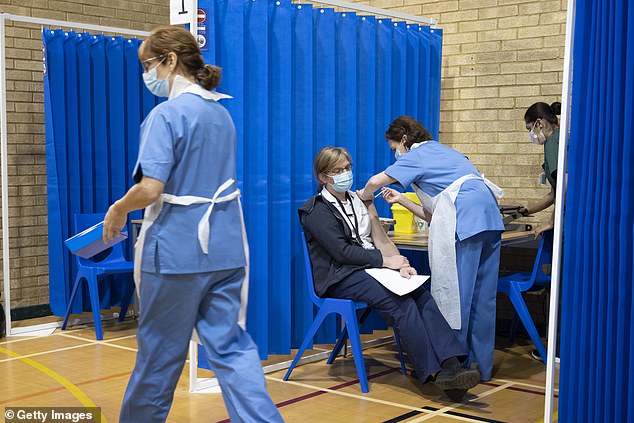 Hundreds of pop-up GP-led centres are on the way as part of a huge vaccination drive, ministers revealed last night.

With approval for the Oxford vaccine set to come as early as today, Government sources told the Mail that town halls and village community centres are poised to help roll out the jab to millions as quickly as possible.

The centres will be staffed by GPs, nurses, paramedics and pharmacists, with the aim to open the first of them next week.

An army of more than 10,000 volunteers and medics have been recruited by the NHS to help deliver the Oxford vaccine after its approval, it has emerged.

With approval for the Oxford vaccine set to come as early as today, Government sources told the Mail that town halls and village community centres are poised to help roll out the jab to millions as quickly as possible. Pictured: A vaccine centre in Cardiff, on December 8

One senior Government source said: ‘The vaccine is the way to make us safe and get us through this pandemic. We are throwing the kitchen sink at it.’

The Government is believed to have set a target for two million to receive their first dose of either the Oxford or the Pfizer vaccine within a fortnight.

Last night Chancellor Rishi Sunak said: ‘There is light at the end of the tunnel with the vaccine, but I’m confident that if we all pitch in together we will get through this as we have done through this year, and we can look forward to a brighter future.’

Former health secretary Jeremy Hunt said ministers had to succeed in the jab roll-out, especially after the revelation of yet another virulent coronavirus strain from South Africa. 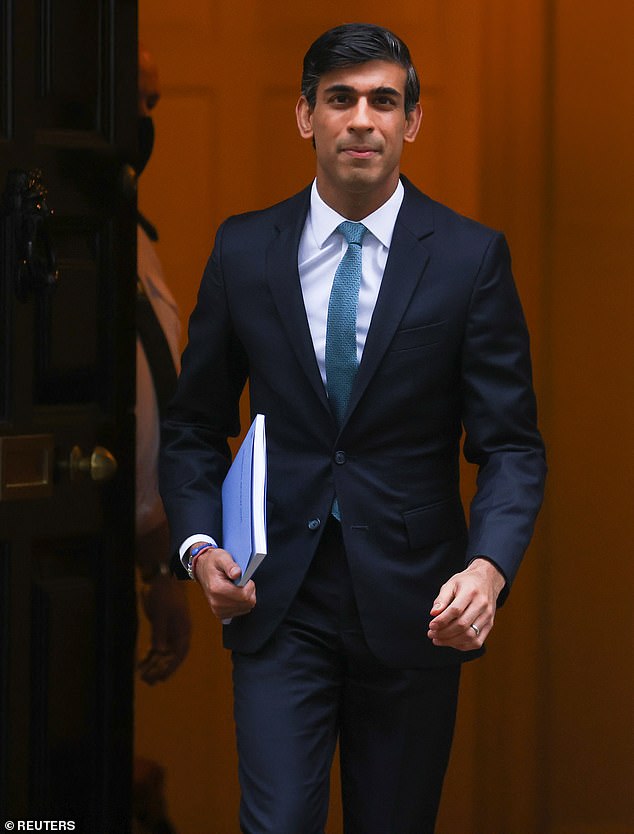 Last night Chancellor Rishi Sunak (pictured) said: ‘There is light at the end of the tunnel with the vaccine, but I’m confident that if we all pitch in together we will get through this as we have done through this year, and we can look forward to a brighter future’

He told the Mail: ‘Time is against us with this new strain so we now need a great national effort to turbocharge the vaccination programme. The logistics will be complex but I have no doubt our incredible NHS can rise to the challenge.’

News of the huge operation came as:

Scots could stay in study scheme

Nicola Sturgeon may demand Scottish students can stay in Europe’s Erasmus exchange scheme despite the UK Government pulling out.

The Scottish First Minister is expected to make a statement today after she said last week’s decision made as the Brexit deal was closed amounted to ‘cultural vandalism’.

Yesterday details emerged of the replacement £100million Turing scheme, named after the Bletchley Park codebreaker. It will fund 35,000 British students to study or work abroad in the next academic year, and will apply worldwide instead of being limited to European institutions.

A senior member of the UK negotiating team said remaining in Erasmus would have cost hundreds of millions a year. 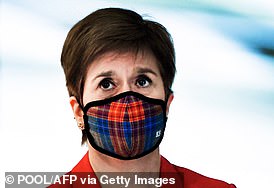 There are hopes the Oxford vaccine will be approved by regulators this week, as officials plan for the 15million most vulnerable in the UK to get their jab by March.

Plans are understood to already be in place to roll it out across the country from January 4. Village halls and local community centres will be coupled with mass vaccination centres within conference venues and sports stadiums, likely to launch in the second week of January.

If efforts to vaccinate the most vulnerable by the end of February are successful, it is hoped it will take the country out of a seemingly endless cycle of lockdowns.

The Oxford vaccine is so important because the UK has early access to so many doses, compared to the 40million on order for the Pfizer and BioNtech vaccine. The Oxford jab is manufactured in the UK, meaning delivery is simpler, and it can be stored at normal fridge temperatures, where the Pfizer jabs must largely be kept at around minus 70C.

Last week Professor Danny Altmann, from the department of immunology at Imperial College London, said the Oxford vaccine would help to get ‘the pandemic under control by Easter’. Pascal Soriot, chief executive of AstraZeneca, yesterday told the Sunday Times: ‘We think we have figured out the winning formula and how to get efficacy that, after two doses, is up there with everybody else.’

The first coronavirus jab in the world was administered to 90-year-old Margaret Keenan on December 8. By Christmas Eve, more than 600,000 in the UK had received the Pfizer vaccine, according to the Government. However critics have suggested the vaccination programme needs to move faster. The planned ramping up of vaccinations would be possible because there are said to be millions of doses of the Oxford vaccine on standby in the UK for use.

Kate Bingham, former head of the Government’s vaccine taskforce, told MPs last month there should be around four million doses available by the end of the year.

The final data on the Oxford vaccine was submitted to the Medicines and Healthcare products Regulatory Agency last week. If it is approved, vaccination centres are reportedly set to include the Nightingale hospital at the London ExCel centre, and Epsom racecourse in Surrey.

A Government spokesman said: ‘The medicines regulator is reviewing the final data from the University of Oxford/AstraZeneca phase three clinical trials to determine whether the vaccine meets their strict standards.’