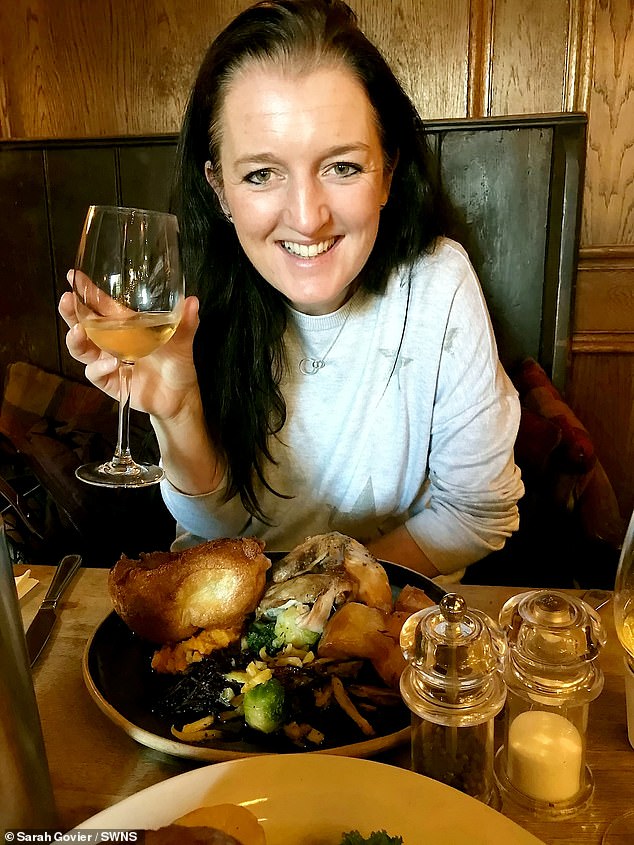 A Covid-19 victim has described how her senses have been left distorted by the virus and has revealed how coffee smells like car fumes and toothpaste tastes like petrol.

Mother-of-two Sarah Govier, 44, from Whitstable, Kent, caught the virus in May and lost her sense of smell – a symptom medically known as parosmia.

The occupational therapist has described how nearly ‘all food smells rotten’  and she has lost half a stone because she can barely bring herself to eat her favourite meals.

Mother-of-two Sarah Govier, 44, from Whitstable, Kent, caught the virus in May and and lost her sense of smell – a symptom medically known as parosmia

Ms Govier has likened the taste of meat to floral soap or perfume, toothpaste tastes more like petrol than mint, and coffee has an odour of car fumes or cigarette smoke.

She revealed how garlic and onions reminds her of a mix of wet dog and stagnant water while chocolate cake tastes so bad she has to spit it out.

Ms Govier, who works at the William Harvey Hospital in Ashford, Kent, has set up a Facebook support group where members can share their experiences, theories and ‘smell training’ tips. 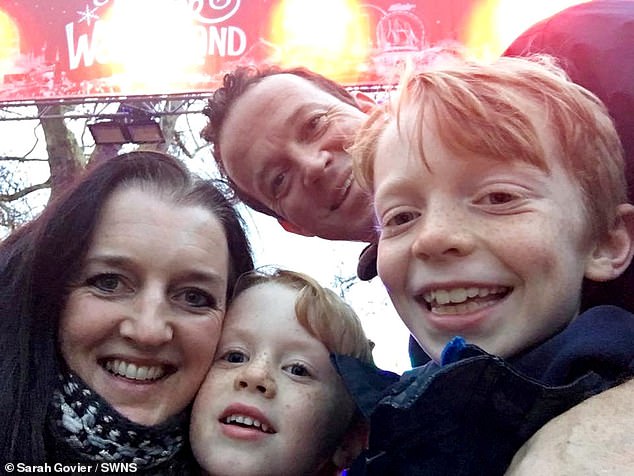 Ms Govier pictured with her husband Jim, 47, and children Jake, 11, and eight-year-old Daniel

She said: ‘Coffee tasted horrible and cleaning my teeth with toothpaste felt like brushing them with petrol – it was vile!

‘At first, everything smelt basically the same, so coffee smelt the same as if someone was smoking or like car fumes.

She continued: ‘Garlic and onions smelt awful – I can’t even describe it, and because they’re in basically every recipe or ready meal it made cooking very challenging! 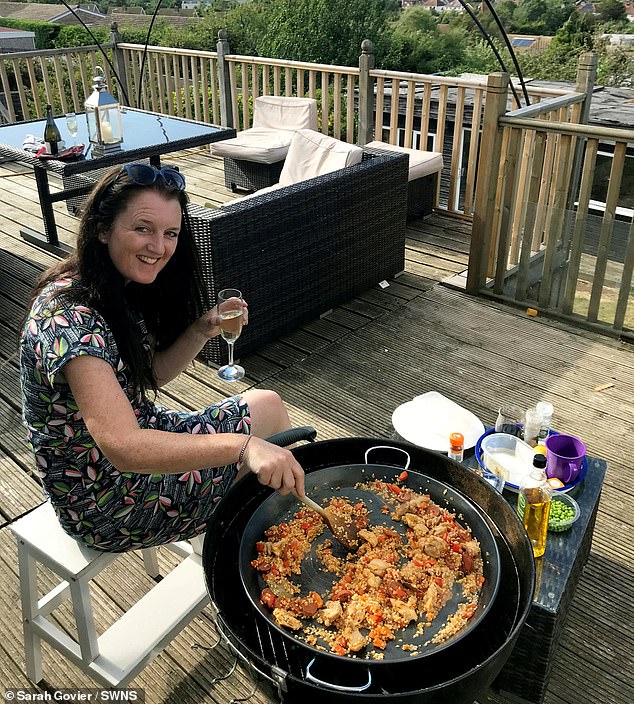 Ms Govier has likened the taste of meat to floral soap or perfume, toothpaste tastes more like petrol than mint, and coffee has an odour of car fumes or cigarette smoke.

‘If I went into someone’s house and they were cooking I would smell a mixture of wet dog and rancid water – everything just stank like mould!

‘I was having to sniff things before I ate them and it felt quite feral, like a weird kind of animal!

‘The aftertaste was often just as bad as I could taste that horrible smell, and it would also linger in the kitchen for days. I even had to spit out chocolate!’

Sufferers of parosmia have even likened their once sweet-smelling perfumes and shampoo to bile. 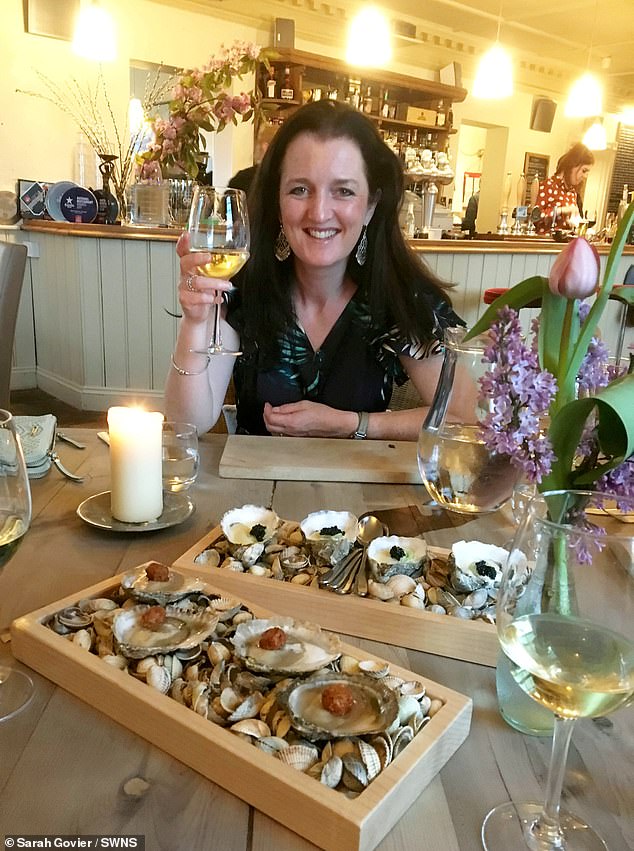 Doctors have found people with Covid-19 lose their sense of smell because the virus damages the receptor nerve endings or supporting cells within their nose.

These scent-detecting nerve endings tell your brain how to interpret the chemical information that makes up a smell, and when damaged or heal incorrectly can lead to parosmia.

Ms Govier said her colleagues tested positive in April but she didn’t have the classic symptoms of a cough and high temperature.

However one day she came home totally exhausted and developed a sore throat, so stayed off work and booked a test on May 2.

Despite her husband Jim, 47, and children Jake, 11, and Daniel, eight, didn’t get symptoms, the afternoon after her test, Sarah lost her senses of taste and smell.

‘I was cooking a curry and one minute I could smell it, but when I went to taste it I couldn’t taste anything!’ she said. 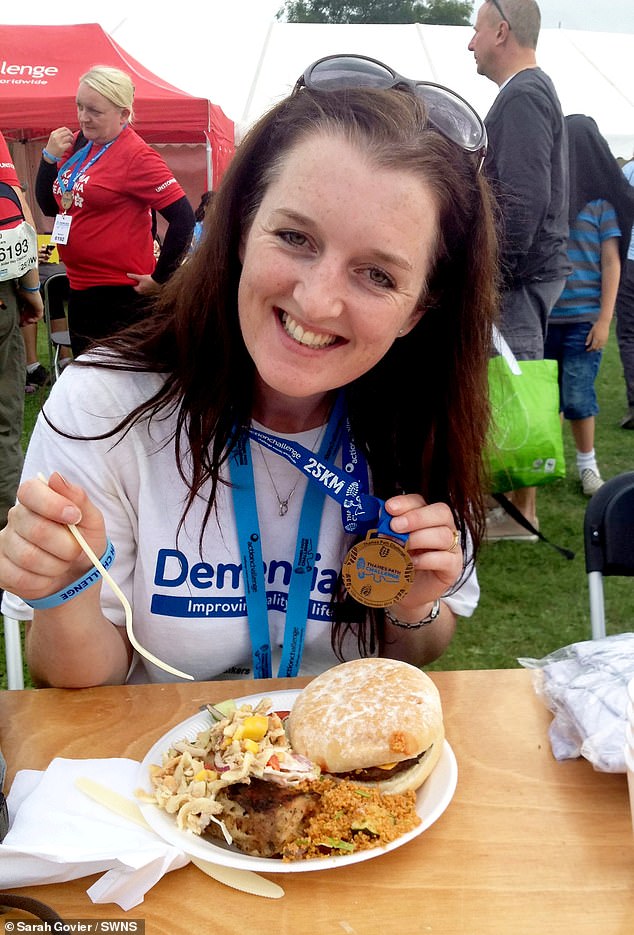 Ms Govier, who works at the William Harvey Hospital in Ashford, Kent, has set up a Facebook support group where members can share their experiences, theories and ‘smell training’ tips.

‘I ran upstairs and sprayed some perfume on my wrist, but I couldn’t smell anything and that was when I knew I had it so I just started crying.’

She got a positive test result a few days later and lost her senses of taste and smell for five or six weeks.

It then returned for around six weeks again, before she noticed a problem.

She went out for a fry up with a friend in August and realised everything tasted very salty and the meat was ‘almost floral, like soap or perfume’.

She added: ‘Gradually over a few days things just started selling awful, but it’s very hard to describe because it doesn’t smell like anything you’ve ever smelt before!

‘Food shopping became a nightmare because I had no motivation to do any cooking.’

She is still able to eat cheese and fish as well as her favourite food of avocados with prawn cocktail but is worried she will get bored.

Ms Govier can also stomach potatoes, pasta, rice and porridge, but has also started eating meal replacement milkshakes for a bit of variety.

She said: ‘I was 10 stone in August which is the heaviest I had been in a long time, but within a couple of weeks of developing my parosmia I lost half a stone just because I wasn’t eating.’ 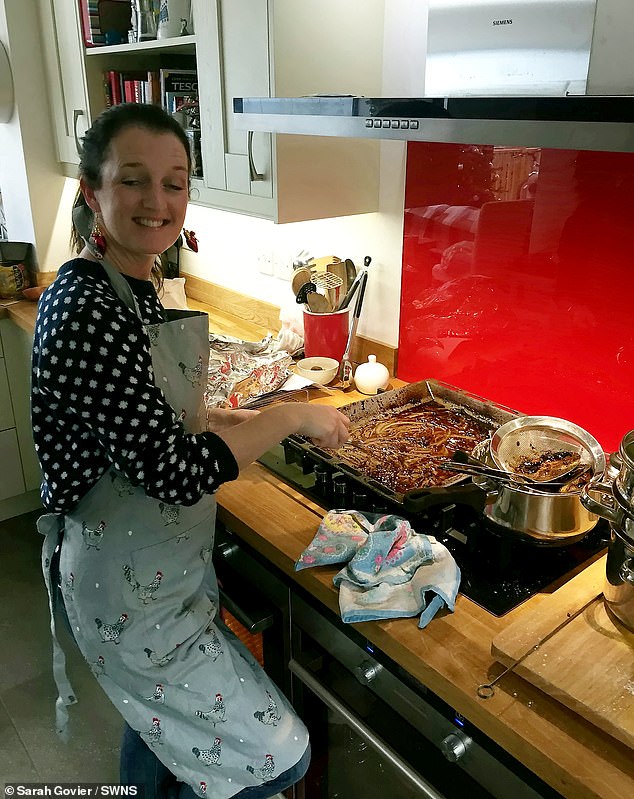 Her altered sense of smell means she is also hypersensitive to the pong of sweat and urine – which stink more than ever.

‘I can also smell sweat really strongly in situations where you wouldn’t normally notice, like just when I get a bit hot from walking the kids to school,’ she said.

‘A small bit of perspiration in my clothes smells like rotten cabbage, and when you can smell yourself all the time you get really paranoid.

‘I’m constantly smelling myself and asking people if I stink- I haven’t wanted to exercise because of the horrible smell of sweating!’

She posted her symptoms on a Covid-19 support group and discovered that she wasn’t alone.

Ms Govier was then inspired to create her Facebook group called ‘Covid Anosmia/Parosmia Support Group’, which now has more than 4,000 members from all over the world.

She said: ‘People come on and thank me and can’t believe they’re not the only ones!

‘There’s been some parents who are miserable because they couldn’t smell their newborn baby.

‘I don’t know what Christmas dinner is going to be like for me – might have to eat my prawn cocktail, or push the boat out and get a lobster!’ 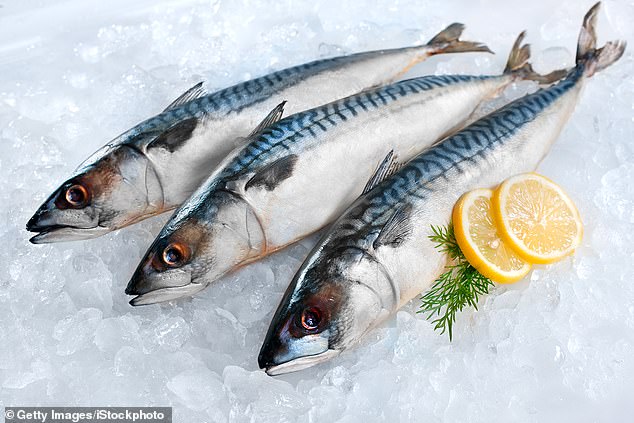 Some sufferers have tried re-training their brain with ‘smell training’ – putting essential oils on bits of paper and smelling them about twice a day.

She said: ‘It can feel quite lonely as it really affects you pretty much all day every day.

‘So many celebrations and social events revolve around eating or going out to a restaurant, so right now there’s part of me that’s grateful for the restrictions stopping all that!’

Fish and burning toast are among the ‘unbearable’ odours in place of normal smells haunting Long Covid patients as more unusual symptoms of the virus emerge.

The symptom is the inability of the brain to properly identify an odour’s ‘natural’ smell and seems to be affecting young people and healthcare workers in particular.

The Ear Nose and Throat surgeon was among the first medics to identify anosmia, loss of smell, as a coronavirus indicator in March, and urged Public Health England to add it to the symptom list months before it became official guidance.

Professor Kumar noticed that some patients he was treating and studying were recovering from long-term anosmia, something he said has affected thousands of people across the UK, only to experience parosmia.

The president of ENT UK said he saw two patients suffering with parosmia this morning. 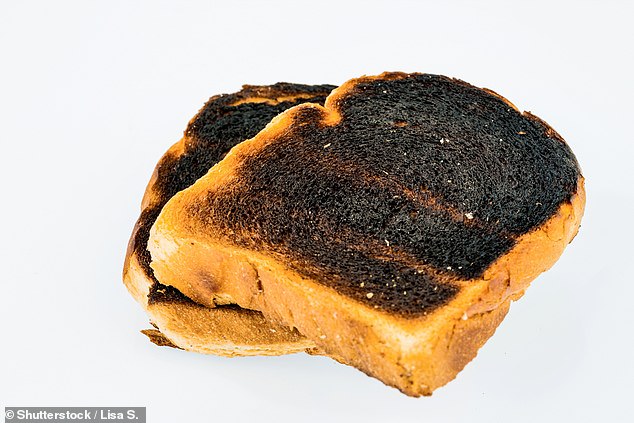 ‘For some people, it is really upsetting them. We are calling it neurotropic virus,’ he added.

‘What this means is the virus is affecting the nerves in the roof of the nose – it’s like a shock to your nervous system, and the nerves aren’t functioning.’

Daniel Saveski, a 24-year-old banker living in London, said he lost his sense of taste and smell for two weeks after contracting coronavirus in March and has been suffering with parosmia since.

Mr Saveski, from West Yorkshire, said strong-smelling things like bins now have a burning, sulphur-like odour, or smell ‘like toast’. 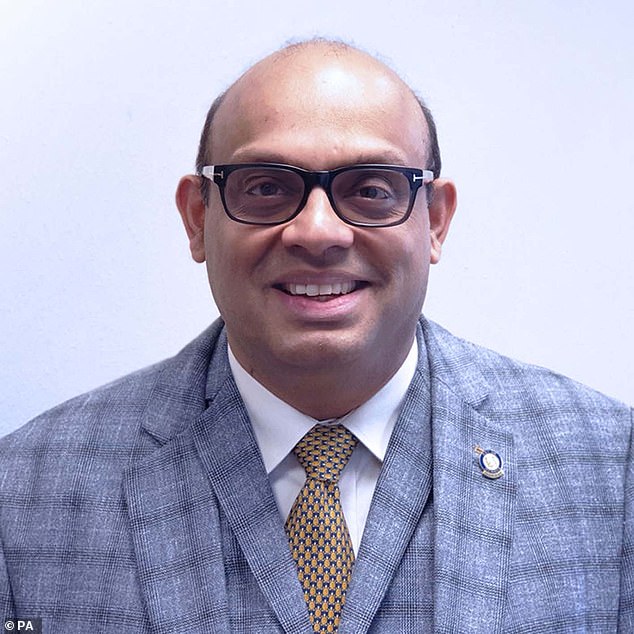 Professor Kumar (pictured) noticed that some patients were recovering from long-term anosmia, something he said has affected thousands of people across the UK, only to experience parosmia

Anosmia is the medical name for a condition in which someone suffers a complete or partial loss of their sense of smell and/or taste.

The most common single cause of the condition – temporary or permanent – is illnesses which affect the nose or sinuses, such as polyps which grow in the airways, fractured bones or cartilage, hay fever or tumours.

It is different to hyposmia, which is a decreased sensitivity to some or all smells.

Around 3.5million people in the UK are affected by the condition, along with nearly 10million in the US. It is surprisingly common and affects between three and five per cent of people.

Head injuries and nervous system diseases like Parkinson’s or Alzheimer’s may also contribute to the condition by damaging nerves in the nose which are responsible for detecting smells.

He added: ‘It’s lessened my enjoyment of food, and it’s a bit depressing not being able to smell certain foods.’

Lynn Corbett, an administrator for an estate agent, said she was ‘shocked’ to wake up on her 52nd birthday in March with ‘absolutely no smell or taste’.

Ms Corbett, from Selsey in Sussex, said: ‘From March right through to around the end of May I couldn’t taste a thing – I honestly think I could have bitten into a raw onion such was my loss of taste.’

She said her sense of smell began to return in June, but ‘nothing smelled like it should’.

‘Most things smelled disgusting, this sickly sweet smell which is hard to describe as I’ve never come across it before,’ she said.

She added that despite being a ‘coffee addict’ before March, the drink now smells ‘unbearable’, as do beer and petrol.

Ms Corbett said: ‘I’m not sure if things will ever return to the way they were.

‘I’m OK with it, I just think myself lucky that if I did have coronavirus, which it looks like I did, then I haven’t been seriously ill, hospitalised or died from it like so many others.’

Charity AbScent, which supports people with smell disorders, is gathering information from thousands of anosmia and parosmia patients in partnership with ENT UK and the British Rhinological Society to aid the development of therapies.

AbScent recommends ‘smell training’, which involves sniffing rose, lemon, clove and eucalyptus oils every day for around 20 seconds for those trying to regain their sense of smell.

Parosmia is the inability of the brain to properly identify an odour’s ‘natural’ smell.

The smell is instead turned into an unpleasant one, commonly described as ‘burned’, ‘rotten’ or ‘faecal’.

Symptoms usually decrease over time for most people with parosmia.

Damage to the olfactory bulb affects how smells are interpreted by the brain.