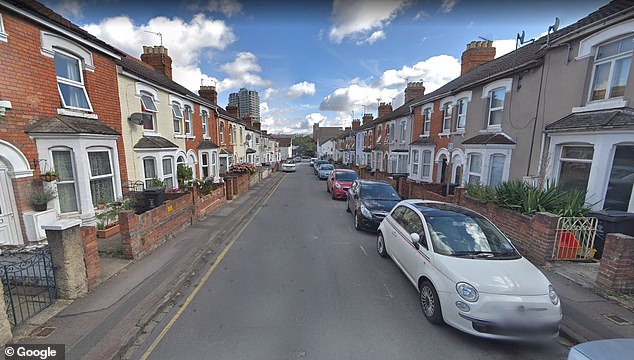 A man has been arrested after paramedics were attacked with a knife and had their ambulance rammed by a car as they hid inside on Christmas Day.

The incident unfolded at around 4.30pm when staff from the South Western Ambulance Service responded to a medical incident at a property on Morse Street in Swindon, Wiltshire.

While at the address they became fearful for their own safety and left to seek sanctuary in their ambulance, which was then driven into by a car.

Wiltshire Police said a 39-year-old man has been arrested on suspicion of affray, criminal damage and drink driving.

Incident unfolded at around 4.30pm when staff from the South Western Ambulance Service responded to a medical incident at a property on Morse Street in Swindon, Wiltshire (pictured)

He remains in custody at Gablecross police station, Swindon.

Inspector Steve Love said: ‘It is a sad reality that while attending calls to protect the public that emergency service staff are put in situations where they fear for their own safety on a daily basis and Christmas Day is no exception unfortunately.

‘Nobody should be made to feel in danger when trying to carry out their work, especially when that work involves protecting our communities.

‘We will do all we can to protect emergency workers doing their job and urge the public to respect our officers and members of the ambulance service and fire service and to help us to help you.’