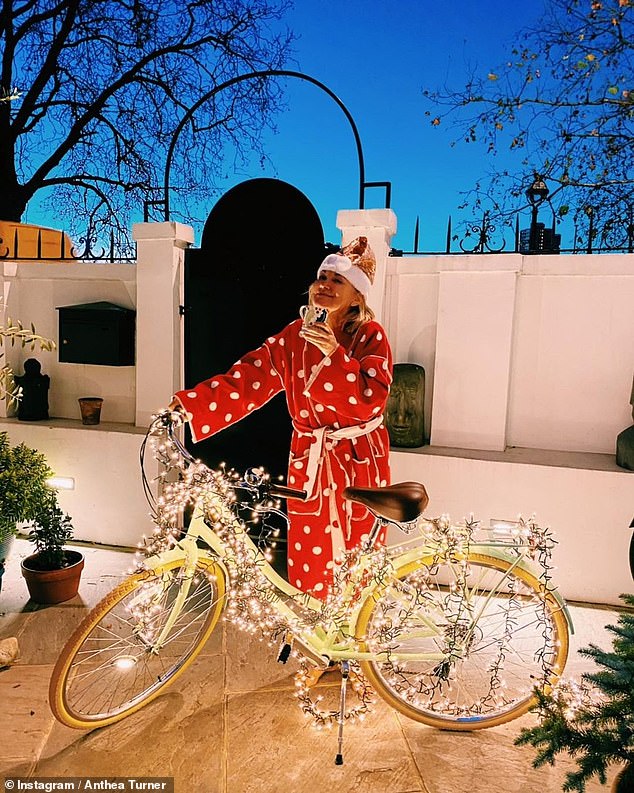 She was left devastated when her beloved bicycle was stolen from outside a church during the summer.

And Anthea Turner shared her excitement over getting a new ride for Christmas as she posted a series of snaps from her festive celebrations to Instagram on Monday.

The TV presenter, 60, appeared to be in great spirits as she took her Pendleton bike- affectionately named Minty – out for a spin and cosied up to fiancé Mark Armstrong.

So thoughtful! Anthea Turner shared her excitement over getting a new bike for Christmas, after her wheels were stolen in the summer, as she posted a series of snaps from her festive celebrations to Instagram on Monday

Anthea was bursting with festive spirit as she donned a red and white polka dot dressing gown and glittery Santa hat to pose with her new bike.

She happily smiled while leaning on the handlebars in the image which showed her gift covered in twinkly fairy lights.

Other snaps from Anthea’s Christmas celebrations revealed she wasted no time in testing out her present with a ride through a graveyard.

While elsewhere during the festive period the beauty enjoyed a large glass of red wine from a personalised glass and some piano music provided by Mark. 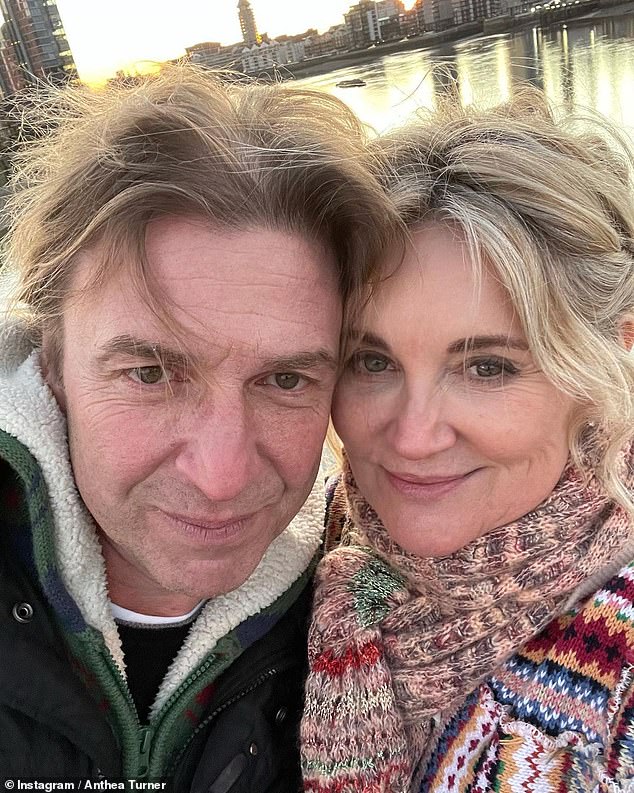 Quality time together: The TV presenter, 60, also spent some of the festive period enjoying walks with her fiancé Mark Armstrong

Sharing her excitement with her fans, Anthea penned: ‘I’m alive !! Posting this and going out for a big run to remove @ryanrileyy Christmas Pudding Triffel from my system beyond delicious and deserves its own post…

‘But for now this is me on Christmas Day feeling like a 7 year old Santa dragged me out of bed so I could fully appreciate the fairy lights festooned on my bike – I bloody adore it, camp as custard!

‘Made funnier that Mark had to cycle her home from Halfords @victoriapendleton_ you did a great job and she’s been named ‘Minty’. 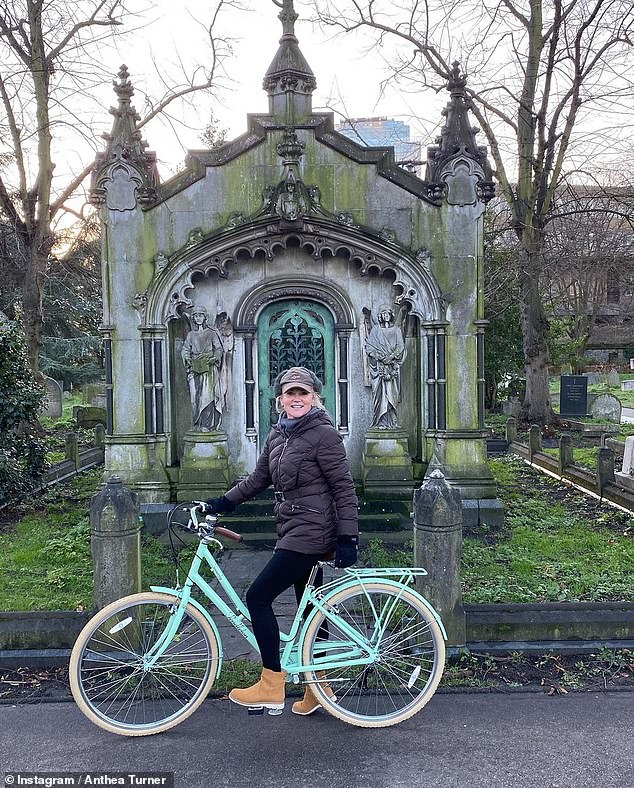 Testing it out: Other images from her festive celebrations revealed that Anthea wasted no time in getting on her new bike and taking it for a spin 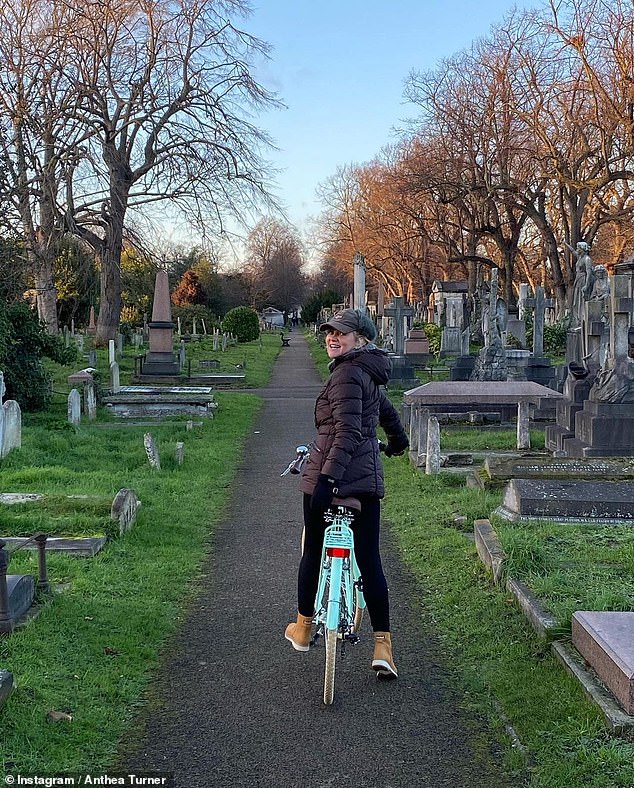 Looking good: The star could not stop smiling as she rode through a graveyard 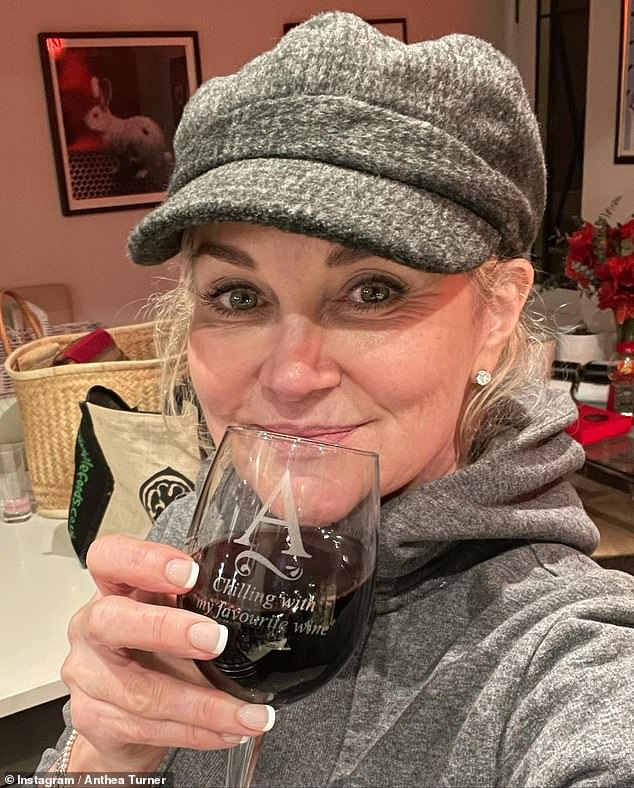 ‘Christmas Day walk, other random shots and a joke – Crackers btw are @rockettstgeorge.co.uk didn’t realise how good they were until I opened them, have sale on atm and just bought a few bits for next year.’

Anthea was gutted back in August when her bike was stolen and also took to social media in October to revealed she was ‘devastated’ after thieves smashed into her Range Rover and stole her designer handbag.

The TV personality shared a photo of her vehicle with a smashed-in back windshield and revealed she was the target of three thefts in two months. 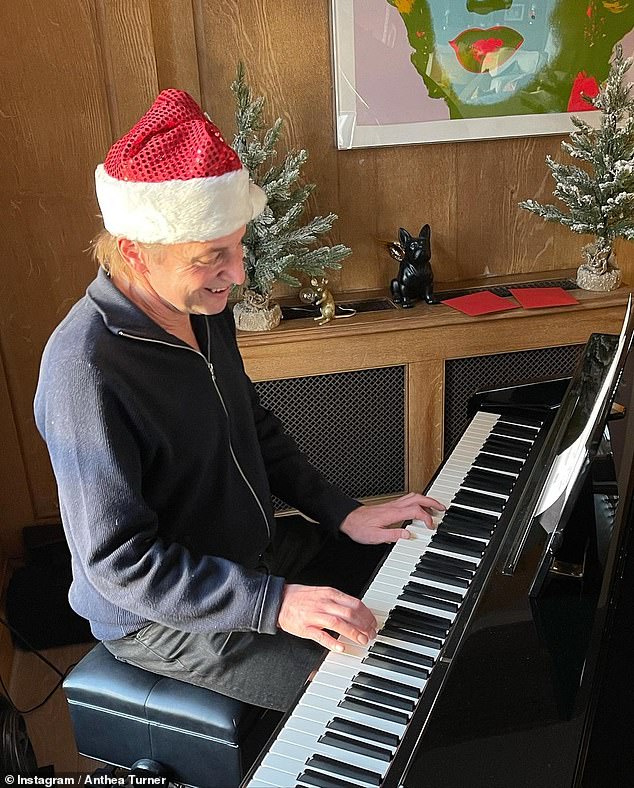 Providing the entertainment: Mark was also seen showing off his musical talents on the piano 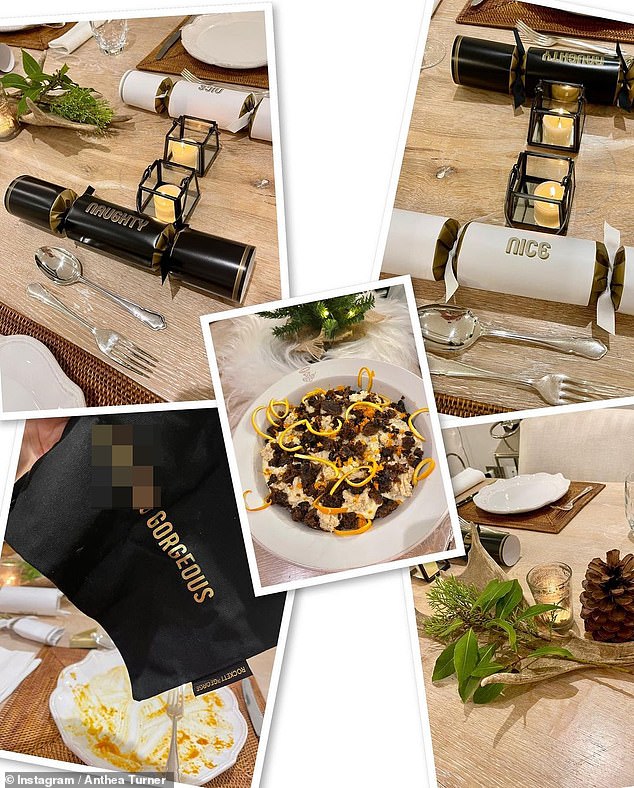 Trendy: The TV personality treated herself to some designer crackers for the table 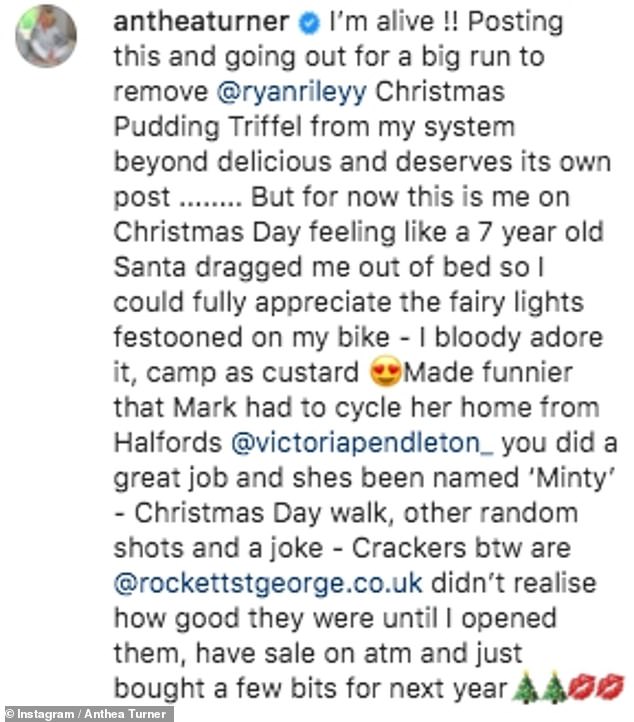 So excited: Anthea penned a lengthy caption sharing her excitement and saying she’s off for a run after eating lots of treats during the festive period

Anthea detailed how she had been enjoying dinner with pals when thieves broke into her vehicle and stole a Mulberry handbag, an item of great sentimental value to her.

Anthea was scheduled to tie the knot to fiancé Mark in September in Italy, but the pair were forced to postpone their nuptials due to the COVID-19 pandemic.

She previously told HELLO!: ‘Mark and I had planned to go out and look at venues in March and then set a date for September. 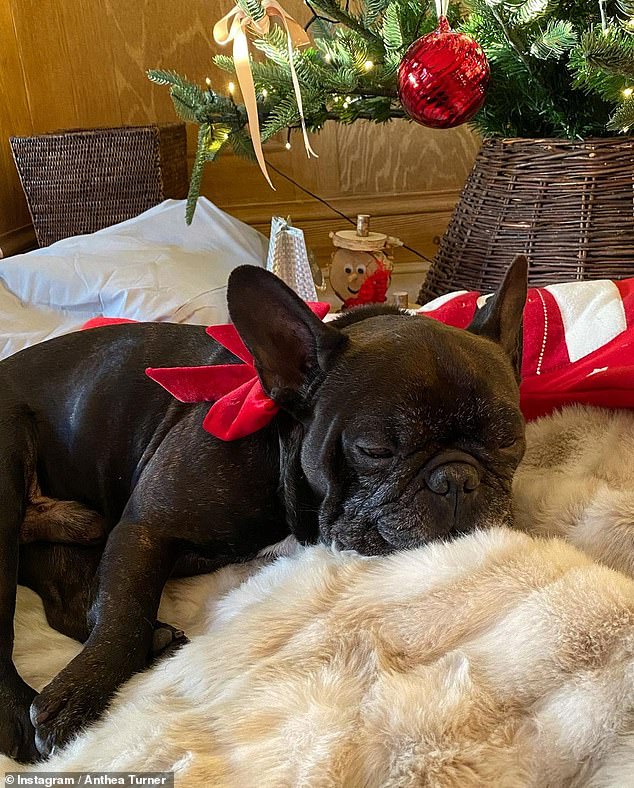 All tired out: Anthea’s adorable pup also got into the Christmas spirit in a red bow and took a nap under the tree during the exciting celebrations 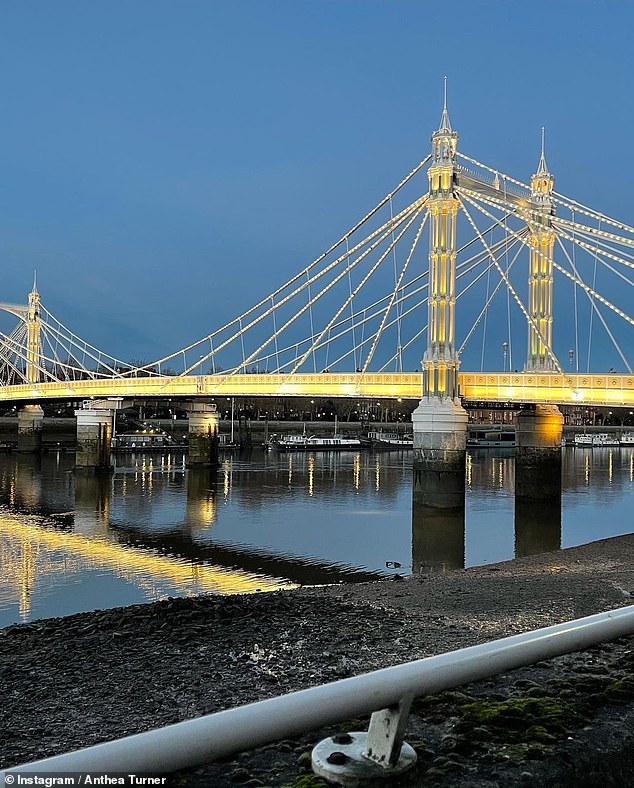 Winter walks: Anthea also shared a snap from a stroll around London

‘Mark is from Italy, his family are from Milan, so it seemed the perfect place for us.

‘It will be next year now. I am not even in any angst about it. When we do it, it will be small and cute, just with our close friends and family.’

She was previously married to ex-husband Grant Bovey for 13 years, but the couple split after he cheated on her with a woman half her age in 2013.

Anthea’s first marriage was to her manager, former DJ Peter Powell, in 1990, with the couple splitting up eight years later. 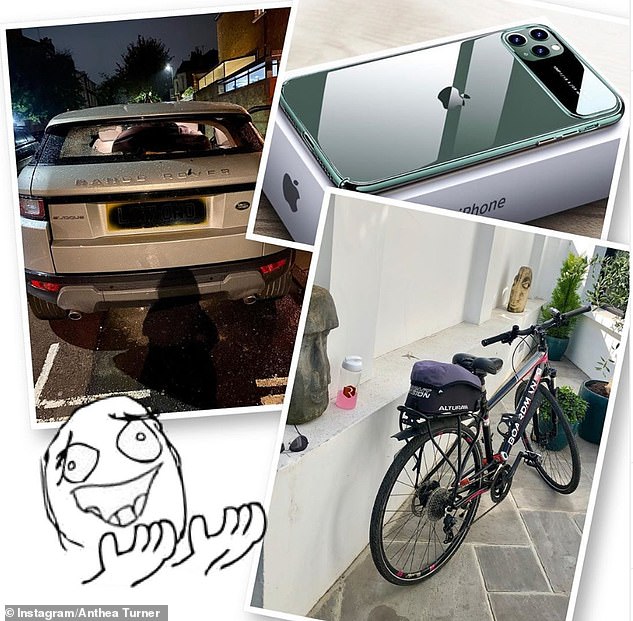 Awful: In October, the presenter revealed she had been the target of three thefts in just two months