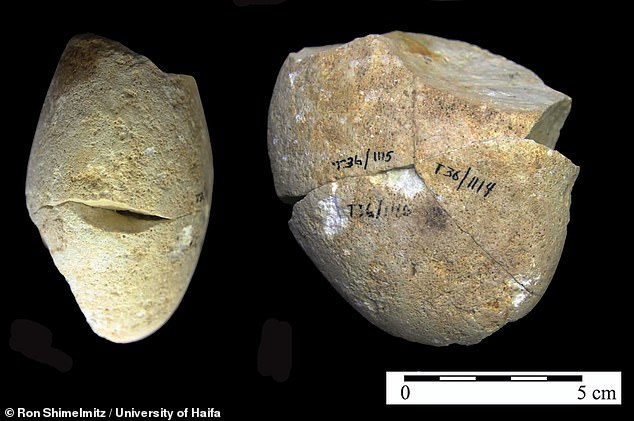 Found in the Tabun Cave in northern Israel, the implement is a cobble, a type of small rounded stone, and predates homo sapiens by at least 50,000 years.

Previously, such tools weren’t thought to have been introduced until much later, approximately 200,000 years ago.

It was used by prehistoric hominids for ‘delicate abrading,’ researchers say, though for exactly what purpose is still unknown.

Archaeologists in Israel have identified what they believe is the oldest known tool used for grinding or scraping, in Mount Carmel’s Tabun Cave. At 350,000 years old, it predates modern homo sapiens by thousands of years

Tabun Cave, located on Mount Carmel near Haifa, was first explored by British archaeologist Dorothy Garrod in the 1920s.

It is believed to be home to one of the longest periods of human occupation in the Levant.

Excavations have suggested hominid activity there dating back at least 500,000 years.

Flint fragments discovered in the cave have provided the oldest signs of humans controlling fire. 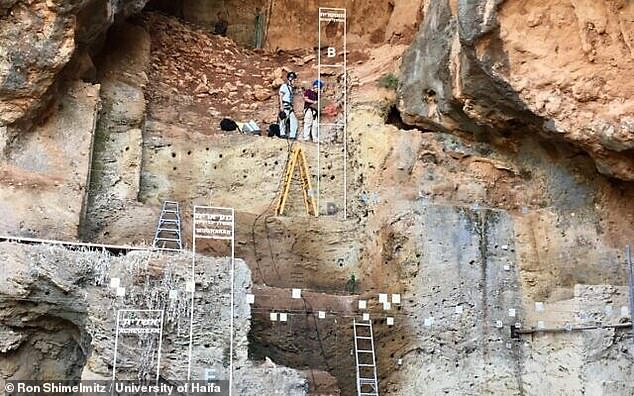 Tabun Cave was first excavated in the 1920s and artifacts there date back at least 500,000 years. Flint fragments on the site have provided the earliest signs of humans controlling fire 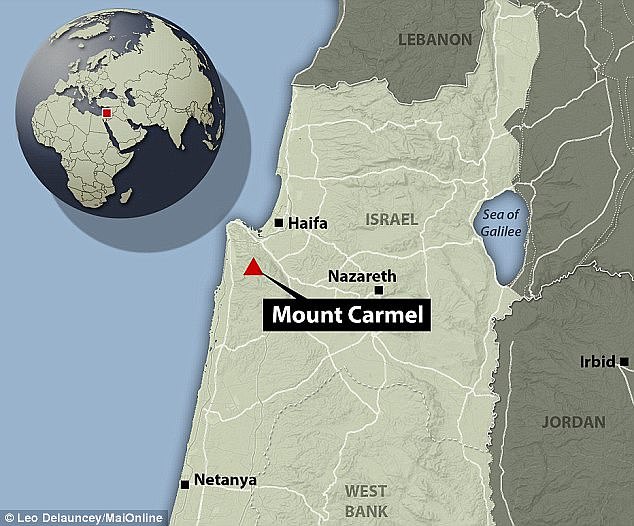 Tabun Cave, at Mount Carmel in northern Israel, is believed to be the site of one of the longest periods of human occupation in the Levant

Made of the mineral dolomite, the tool was first uncovered in the 1960s, but its simplistic appearance led it to be largely ignored for decades.

More recently it was reexamined by a team from the University of Haifa’s Zinman Institute of Archaeology as part of an ongoing effort to reassess items found at the cave.

Judging by microscopic wear patterns, they determined it was used for scraping surfaces—a groundbreaking discovery.

‘The entire engagement in this technology is much later, around 200,000 years ago,’ co-author Ron Shimelmitz told Haaretz.

It’s evidence that ‘at such an early stage a very significant technology was added to [the hominids’] ‘toolbox,” according to the researchers, who published their findings in the Journal of Human Evolution. 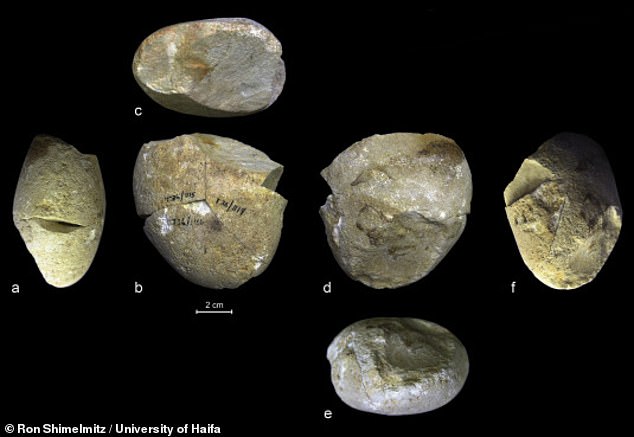 ‘While the tool is seemingly ‘simple,’ its early appearance and the fact that it has no parallel in such an early stage of human evolution give it world importance.’

They hypothesize it was used to work soft animal hides but whether for clothing or some other purpose is still a mystery.

‘We were left with some question marks,’ Shimelmitz told The Times of Israel.

Earlier stone tools have been found before—some dating to more than 3 million years ago—but they usually showed evidence of pounding or beating, which are vertical motions.

This dolemite cobble is the first known item used for scraping, which requires a horizontal motion and allows for more delicate manipulation of a material.

Marks on the stone are similar to those found on later grinding tools, The Times of Israel.

The discovery connects us more closely to our pre-human ancestor and allows scientists to trace ‘how cognitive and motor abilities that developed during human evolution eventually evolved into important phenomena in human culture to this day,’ the authors said in a statement, including agriculture, food production, fixed residences, storage and ‘an increase in social and economic complexity.’