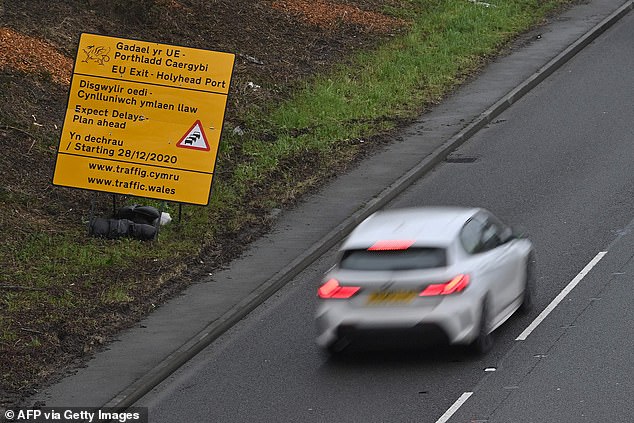 By Jack Newman For Mailonline

Traffic-easing measures are to be introduced at the second biggest ‘roll-on roll-off’ port in the UK over fears of jams post-Brexit.

The Welsh Government announced a temporary contraflow would begin on Monday on the A55 road approaching Holyhead, north Wales.

The port is the second largest ‘roll-on-roll-off’ port after Dover, and carries 1,200 lorries and trailers a day across the Irish Sea.

Traffic easing measures are to be introduced at Holyhead, the second biggest ‘roll-on roll-off’ port in the UK, over fears of jams post-Brexit

After the Brexit transition period ends on January 1, traders will need to fill in Smart Freight online customs declaration forms, allowing them to ensure their goods are ready for border checks before they set off for ports.

All HGVs turned away from the port will be redirected back to the contraflow to turn off at J4 and join the westbound carriageway which is reserved for redirected lorries.

They will either be redirected to another site, or if no other site is available, they will be stacked on the A55 while they arrange the correct paperwork.

Work is already under way for a temporary lorry park on land at Parc Cybi and the site is expected to be ready by mid-January.

The reasonable worst-case scenario published by the UK Government highlights that 40% to 70% of HGVs arriving at ports after January 1 could be turned away as they do not have the right documentation.

The Welsh Government said the peak was expected in mid-January but the plans needed to be in place before the end of December. 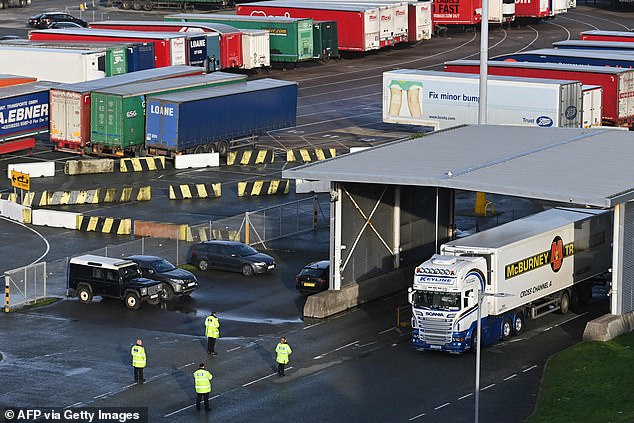 Ken Skates, the minister for transport and North Wales, said: ‘We need to implement these contingency plans in order to do what we can to minimise any possible disruption for the port, community of Holyhead and wider area.

‘We have never faced this kind of situation before and we have a duty to prepare for the worst possible scenario.

‘We expect the busiest time for redirected HGVs to be towards the middle of January, and it’s possible but not certain, that the first few days of January will be relatively quiet.

‘However, we must be ready for all eventualities.

‘We will keep these plans under constant review and as soon as it becomes clear that we no longer require the contraflow, we will dismantle it.

‘We have been working with partners across North Wales, including Anglesey Council, on these plans. Any reviews and changes to the plans will be done in full consultation with them.

‘From the outset we have been clear that the UK Government’s approach on our future trading relationship with the EU would risk major disruption in Wales, particularly at the border.’