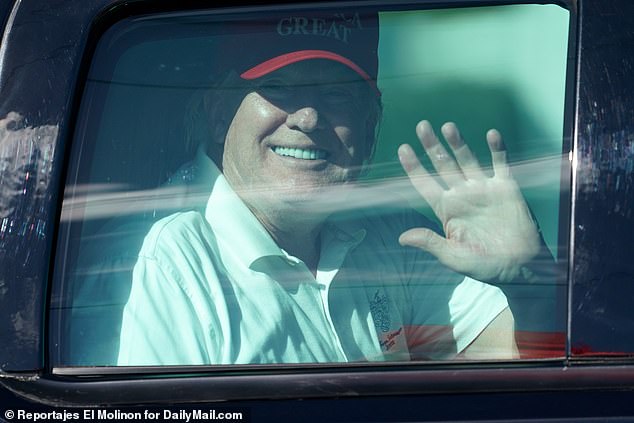 President Donald Trump tweeted on Sunday that he has some ‘good news’ for Americans regarding the COVID relief bill despite refusing to sign the $900billion legislative package that resulted in millions losing their unemployment benefits.

He also shared: ‘See you in Washington, DC, on January 6th. Don’t miss it. Information to follow!’

The White House did not respond to questions about what he meant.

Trump said he wants the size of the relief checks to be tripled, an 11th hour demand that has thrown the fate of the legislation into limbo.

If he continues his opposition, the federal government will run out of money at 12.01am Tuesday while he spends the holidays golfing in Florida.

In the face of growing economic hardship and spreading disease, lawmakers urged Trump on Sunday to sign the legislation immediately, then have Congress follow up with additional aid.

Aside from unemployment benefits and relief payments to families, money for vaccine distribution, businesses, cash-starved public transit systems and more is on the line. Protections against evictions also hang in the balance.

‘So many people are hurting. … It is really insane and this president has got to finally … do the right thing for the American people and stop worrying about his ego.’

Republican Sen Pat Toomey of Pennsylvania said he understood that Trump ‘wants to be remembered for advocating for big checks, but the danger is he’ll be remembered for chaos and misery and erratic behavior if he allows this to expire’. 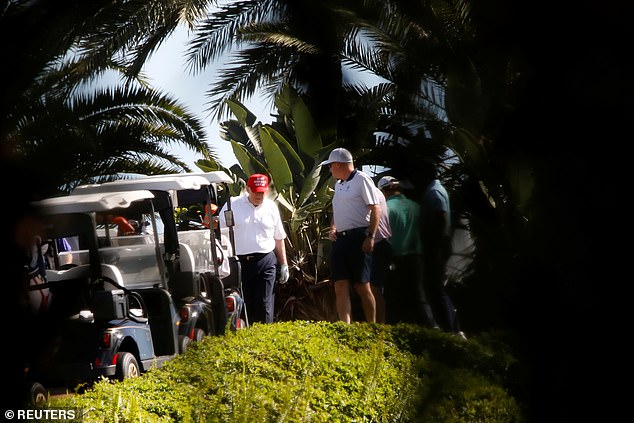 Trump said he wants the size of the relief checks to be tripled, an 11th hour demand that has thrown the fate of the legislation in limbo. If he continues his opposition, the federal government will run out of money at 12.01am Tuesday while he spends his time golfing (above) 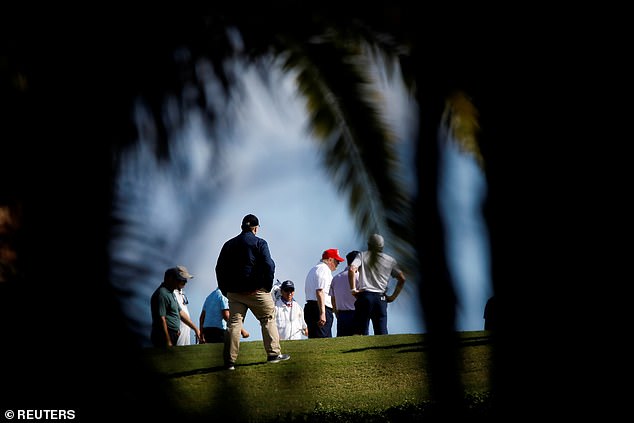 In the face of growing economic hardship and spreading disease, lawmakers urged Trump on Sunday to sign the legislation immediately, then have Congress follow up with additional aid. Trump is pictured playing golf at the Trump International Golf Club in West Palm Beach Sunday

Toomey added: ‘So I think the best thing to do, as I said, sign this and then make the case for subsequent legislation.’

The same point was echoed by Maryland Gov Larry Hogan, a Republican who’s criticized Trump’s pandemic response and his efforts to undo the election results.

‘I just gave up guessing what he might do next,’ he said.

Republican Rep Adam Kinzinger of Illinois said too much is at stake for Trump to ‘play this old switcheroo game’.

‘I don’t get the point,’ he said. ‘I don’t understand what’s being done, why, unless it’s just to create chaos and show power and be upset because you lost the election.’

On Saturday, Trump repeated calls for the stimulus checks to be boosted to $2,000 instead of the $600 promised by the current bill, which was overwhelmingly passed by Congress last Tuesday.

According to the Brookings Institute, 10 million unemployed workers will lose compensation immediately from Saturday while an additional 3.8 million workers are at risk of losing benefits within weeks.

About 9.5 million people had been relying on the Pandemic Unemployment Assistance program.

That program made unemployment insurance available to freelancers, gig workers and others who were normally not eligible.

After receiving their last checks, those recipients would not be able to file for more aid.

Congress had last week approved that these payments could continue until March 14, with an added $300-per-week federal boost for laid-off workers. Yet Trump let the program end as he remained focused on stimulus checks. 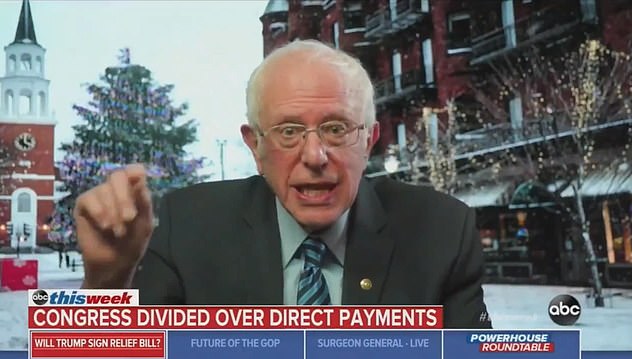 ‘I simply want to get out great people $2000, rather than the measly $600 that is now in the bill,’ Trump tweeted Saturday

The 5,593-page legislation, which was flown Mar-a-Lago on Friday to await Trump’s signature, would have extended the number of weeks people could stay on the program.

Trump sat on the sidelines during negotiations only to emerge after the deal was done and passed by Congress to complain the stimulus checks for Americans were not large enough. The $600 figure was negotiated by his Treasury Secretary Steve Mnuchin.

Trump has repeatedly blamed China for the pandemic, dubbing COVID-19 the ‘China virus’ and blaming it for the outbreak, and the shutdowns, closures and subsequent economic losses that followed.

The end-of-year COVID relief and spending bill had been considered a done deal before Trump’s sudden objections.

Washington has been reeling since Trump turned on the deal after it had won sweeping approval in both houses of Congress and after the White House had assured Republican leaders that Trump would support it.

Instead, he assailed the bill’s plan to provide $600 COVID relief checks to most Americans – insisting it should be $2,000.

Democrats had pushed for larger stimulus check but even with Trump’s support, House Republicans swiftly rejected that idea during a rare Christmas Eve session.

Speaker Nancy Pelosi plans to try again on Monday when the House is in session. But the idea is likely to die in the Republican-controlled Senate, as it did among Republicans in the House.

Democrats were also considering a vote Monday on a stopgap measure aimed at keeping the government running until President-elect Joe Biden is inaugurated Jan. 20.

Meanwhile, Trump has not been swayed to change his mind, despite the rejections from his own party and in spite of the nation being in the grip of a pandemic.

‘I simply want to get our great people $2000, rather than the measly $600 that is now in the bill,’ Trump tweeted earlier Saturday.

‘Also, stop the billions of dollars in ‘pork’,’ he wrote, referencing additional spending that had been latched onto the main bill providing financial relief to the nation.

While payments could be received retroactively, any gap would mean more hardship and uncertainty for Americans who had already grappled with bureaucratic delays, often depleting much of their savings to stay afloat while waiting for payments to kick in.

In addition to the unemployment benefits that have already lapsed, Trump’s continued refusal to sign the bill would lead to the expiration of eviction protections and put on hold a new round of subsidies for hard-hit businesses, restaurants and theaters, as well as money for cash-starved transit systems and for vaccine distribution.

The relief was also attached to a $1.4trillion government funding bill to keep the federal government operating through September, which would mean that failing to sign it by midnight Tuesday would trigger a federal shutdown.

Biden called on Trump to sign the bill immediately as the midnight Saturday deadline neared.

‘It is the day after Christmas, and millions of families don’t know if they’ll be able to make ends meet because of President Donald Trump’s refusal to sign an economic relief bill approved by Congress with an overwhelming and bipartisan majority,’ Biden said in a statement.

He accused Trump of an ‘abdication of responsibility’ that has ‘devastating consequences’.