Viewers tuning into the first episode of BBC One’s festive remake of the 1947 classic Black Narcissus found themselves unable to watch as a plucky nun tackled a ‘terrifying’ set of stone steps above a steep ravine – branding it an ‘elf and safety nightmare’.

The 54-minute long episode, set in a decaying former palace in the Himalayas, saw Gemma Arterton’s character, Sister Clodagh, navigate the white knuckle staircase, with a sheer drop just one wrong foot away.

The stomach-flipping moment in the opening episode of the three-part re-working of the 1947 classic film, which was hailed by Daily Mail critic Christopher Stevens a hit – but received a mixed response from viewers, sparked a string of tweets.

The first episode of Black Narcissus, which aired on Sunday, saw a defiant Sister Clodagh (Gemma Arterton) tackle a nerve-jangling stone staircase, which left viewers with their hearts in their mouths 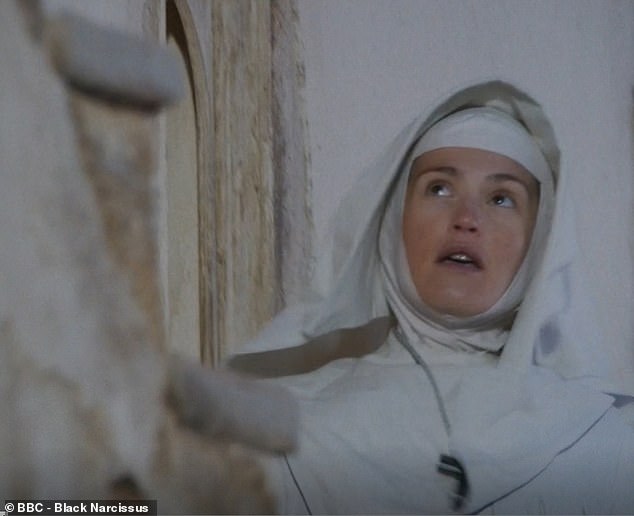 Look up, not down! Many viewers quipped that ‘no risk assessment had been carried out’ on the stone stairs as Sister Clodagh gasps at the sight of the sheer drop beneath her

@rich0131 wrote: ‘Scares me just watching her climb the stairs of the bell tower.’

@MrBenjiWeb added: ‘I’m only tuning in for the seconds episode to see if they finally get a handrail fitted on those stairs.’

@BattleMatt1 quipped: ‘Mr Dean with all his fancy plans for a new church, his first job is a fence and rail around that bell tower.’

The remake of Rumer Godden’s 1939 novel sees a group of British nuns stuck in the Himalayas, living in a crumbling palace where the former local ruler had kept his harem. With the help of Mr Dean (Alessandro Nivol), the agent of General Toda Rai, the nuns, led by Sister Clodagh, vow to open a convent school for local children. 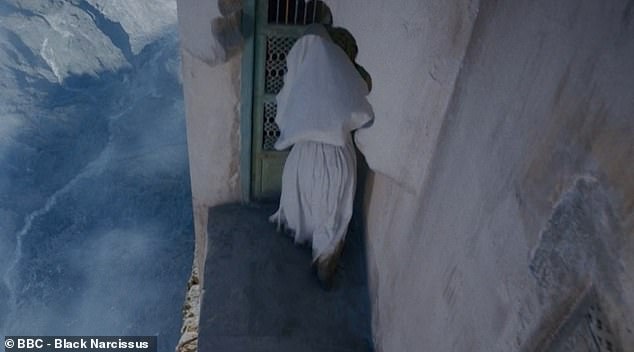 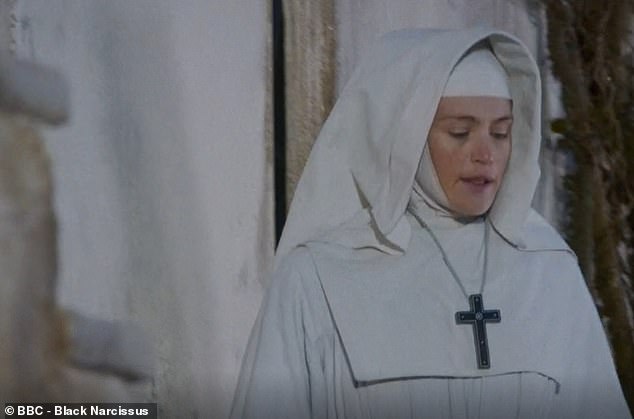 The new version was shot in the Himalayas where the novel was based, with many Nepalese actors starring alongside the largely British cast of main characters 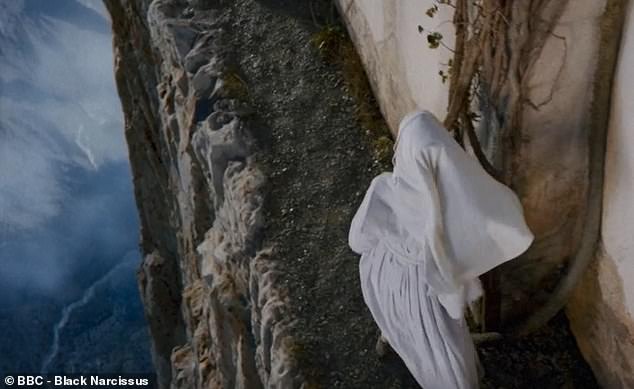 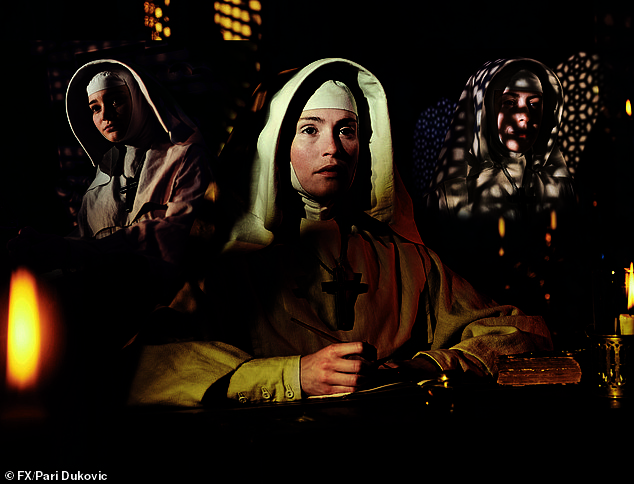 The new series is produced by Andrew Macdonald, grandson of the 1947 film’s co-director Emeric Pressburger, and was filmed in the Himalayas using a cast of Nepalese actors alongside the British stars.

It was an Oscar-winning film starring Deborah Kerr in 1947, and critics have loved the latest version…but viewers tuning in on Sunday evening weren’t quite so convinced.

The story is set in 1934 when a group of Catholic nuns of the St Faith order establish a mission and school at the remote clifftop palace of Mopu, once named the House of Women as it was where concubines had lived.

They’ve been invited by the British-educated General Toda Rai (Kulvinder Ghir), whose family owns the palace and who is the son of the ruler who had the harem. 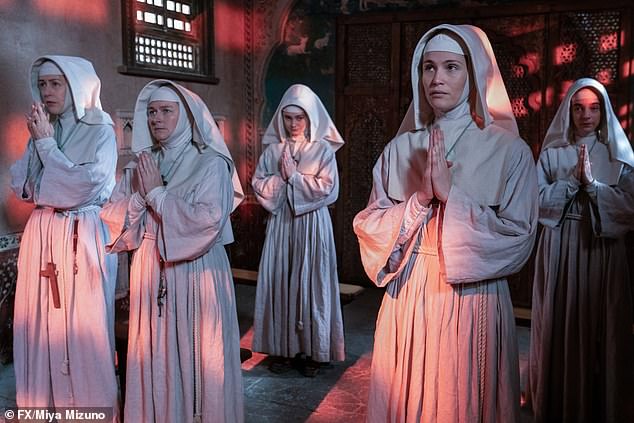 Author Rumer Godden, was not a fan of the original 1947 film Black Narcissus because it wasn’t filmed in the Himalayas. Pictured: A scene from the BBC series, which was set in the Far East

One of the keys to understanding Mr Dean is his hat, which he names ‘Old Felty’. Alessandro Nivola discovered the perfect hat in a second-hand shop in New York.

The nuns’ linen costumes meanwhile were all hand-made, and for the actresses they gave an immediate feel of what it must be like to give up both your body and soul. 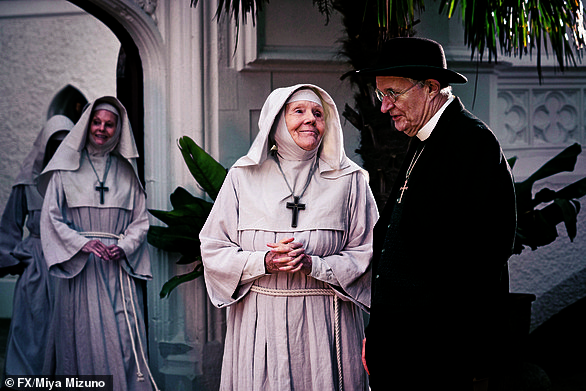 Gemma Arterton who plays Sister Clodagh, said the series is about the nuns reconnecting with their true selves. Pictured: Mother Dorothea and Father Roberts

‘The physicality of the costume was important to us,’ says Gemma Arterton, who like the other actresses spent time with real nuns for research.

‘When you’re wearing a wimple, you feel like everything is constricted. Your ears are covered, you can hardly see your face and you have a veil.

‘So it blinkers you and you can’t really be expressive. As soon as I started playing Sister Clodagh, I felt myself getting very tight.’

Toda’s sister Princess Srimati fell to her death there too, and he wants to rid the place of its ghosts as well as educate the local people.

By the time the sisters arrive, there has already been a failed attempt to establish a base by German monks, who were forced to leave after five months. The locals, while not openly hostile, just aren’t that interested. 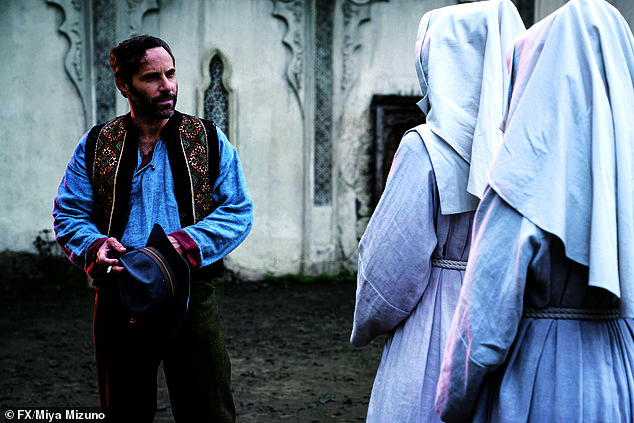 American actor Alessandro, revealed Mr Dean gets on badly at first with Sister Clodagh, however he can’t help but find her appealing. Pictured: Alessandro Nivola as Mr Dean 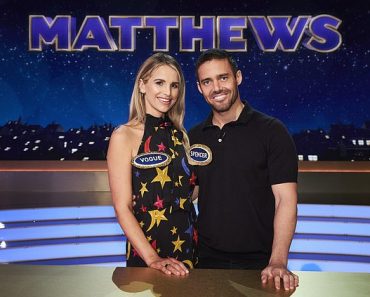 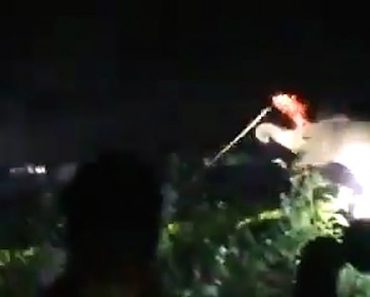 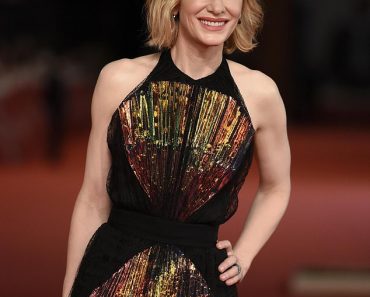 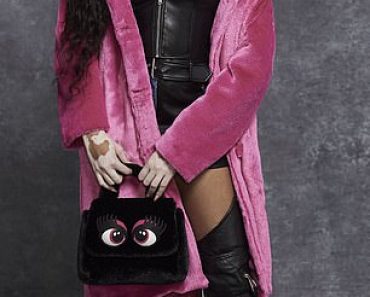 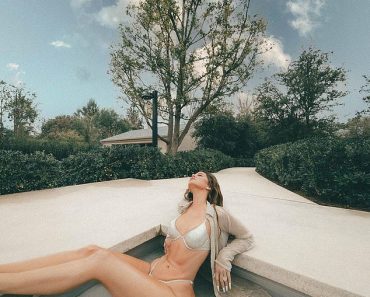 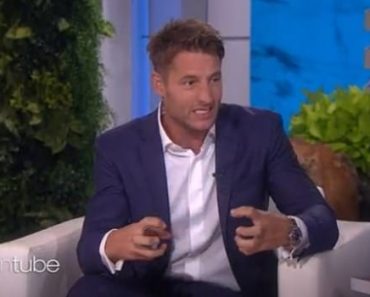