Rep. Bonnie Watson Coleman announced she tested positive for COVID and blamed being trapped in a hold during last week’s attack on the Capitol with Republicans who refused to wear face masks

Democratic Congresswoman Bonnie Watson Coleman announced Monday she tested positive for COVID and she blamed being trapped in a hold during last week’s attack on the Capitol with Republicans who refused to wear face masks.

‘Following the events of Wednesday, including sheltering with several colleagues who refused to wear masks, I decided to take a Covid test. I have tested positive,’ she wrote on Twitter.

Coleman, 75, said she was resting at home with mild systems.

‘I am home resting at this time. While I am experiencing mild, cold-like symptoms, I remain in good spirits and will continue to work on behalf of my constituents,’ she said.

Her office said she was awaiting the results of a PCR test and noted the congresswoman, first elected in 2014, previously received the first dose of the Pfizer/BioNTech COVID19 vaccine, which has been made available to members of Congress and other government officials.

During Wednesday’s attack on Capitol Hill by a mob of unruly Donald Trump supporters, lawmakers were rushed to an undisclosed location and held together for their own safety.

But several Democratic lawmakers complained their Republican colleagues did not wear face masks in the enclosed in space, where the lawmakers huddled together for hours while they waited for security officials to clear the Capitol.

Video footage later emerged of Republican representatives refusing to cover their faces despite being asked to wear the masks. 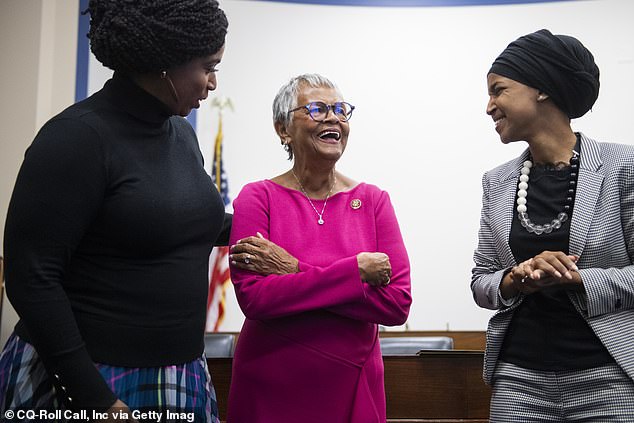 Rep. Bonnie Watson Coleman is the first black woman to be elected from New Jersey and is a cancer survivor 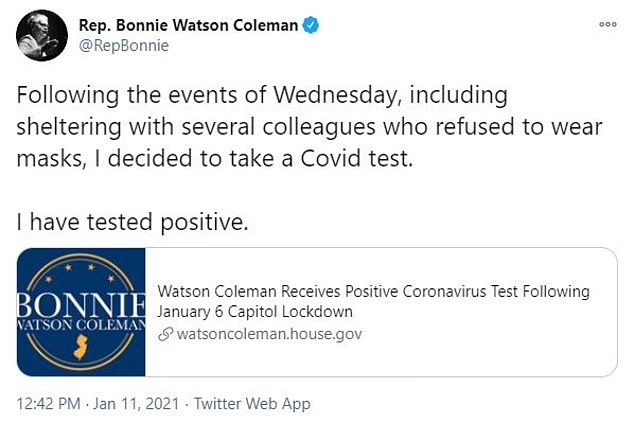 Dr. Brian Moynihan, the attending physician in the Capitol, issued a warning on Sunday to all lawmakers that they may have been exposed to the highly contagious virus during their lockdown.

He noted that ‘many members of the House community were in protective isolation in the large room – some for several hours’ on Wednesday.

He said ‘individuals may have been exposed to another occupant with coronavirus infection’. He did not disclose any details about the infected individual, but they are believed to be a House member or staffer as the room was highly restricted.

He urged all lawmakers to get tested.

Democratic Rep. Lisa Blunt Rochester of Delaware, who was walking around handing out masks, repeatedly asked those in the maskless group to take one, but they brushed her aside.

President-elect Joe Biden said he saw the footage and was ‘appalled.’

‘I was appalled when I saw, as a matter of fact, distinguished congresswoman from Delaware showed the folks in hiding from the mob, going around trying to hand out masks for everybody. Republican colleagues wouldn’t take the mask,’ he said. ‘I think  it is irresponsible. So we all have to make sure it is not a political issue. It is an issue of public safety.’

Coleman is the first black woman in Congress from New Jersey. She previously served in the state assembly. She is a cancer survivor.

Her diagnosis is unlikely to help sooth the tense relations on Capitol Hill between Democrats and Republicans in the wake of Wednesday’s riot. 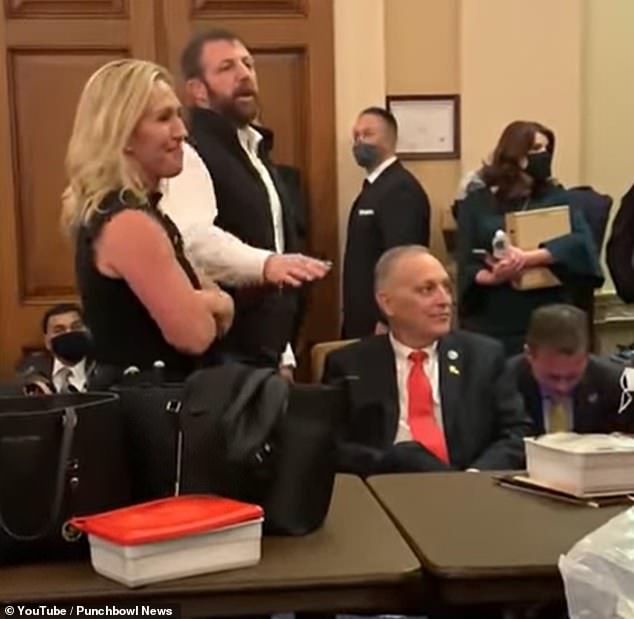 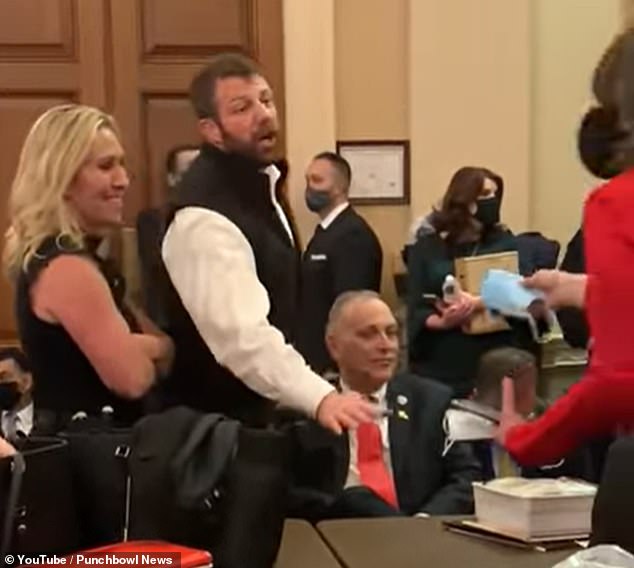 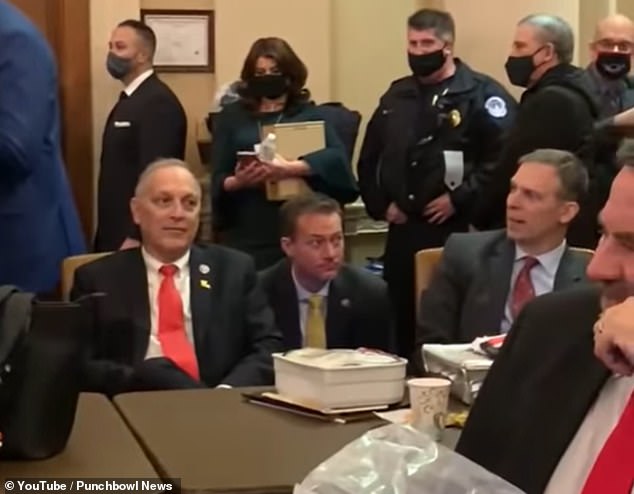 Reps Andy Biggs, Michael Cloud and Scott Perry (seated, left to right) were identified among the Republican lawmakers who refused to wear masks

Getting a coronavirus vaccine won’t mean that you can stop wearing masks.

When asked whether people would have to keep wearing masks after vaccination, Dr Anthony Fauci said: ‘Absolutely,’ in a Harvard University forum interview.

‘There’s no doubt we should not say that vaccines are a replacement or public health measures.’

So far, vaccine makers like Pfizer and Moderna haven’t proven that their shots prevent people who are infected with coronavirus from spreading it.

In fact, their clinical trials have not even proven the vaccines prevent people from catching coronavirus.

We only know that vaccines keep most people from getting sick.

Pfizer’s vaccine is 95 percent effective at keeping people from getting COVID-19 symptoms and testing positive for the virus.

It’s about 100 percent effective at preventing people from getting severely ill from coronavirus, according to the clinical trial.

But Pfizer did not look at whether or not the shot stops people from catching or spreading the virus.

Its CEO has admitted as much in recent interviews.

‘I think that’s something that needs to be examined. We’re not certain about that right now,’ said Albert Bourla, when asked by Dateline’s Lester Holt about whether the shot would prevent transmission.

Pfizer researchers monitored whether people developed possible side effects from the shot or symptoms of coronavirus.

If someone developed symptoms, they were tested for COVID-19.

Pfizer did not test participants who didn’t have symptoms. Neither did Moderna.

In the end, 162 people in Pfizer’s trial who got the placebo shot developed coronavirus symptoms and tested positive, while just eight in the vaccinated group did.

That’s a very strong signal that the vaccine keeps people from getting sick. It does not tell researchers whether people contracted the virus, but didn’t develop symptoms, or whether anyone passed on the infection.

However, people get COVID-19 symptoms usually get sick because the virus has been able to multiply a lot inside their bodies.

The more virus in your nose and throat, the more likely you are to pass it on.

But Pfizer hasn’t even come close to proving that, so even vaccinated people will keep having to wear masks for months to come.

Many members of Congress – but not all – have already received at least the first of two doses of coronavirus vaccines, after it was made available to them just before Christmas.

The news of Coleman’s exposure comes amid fears that Wednesday’s riots could become a major super-spreader event, as most of the participants were seen without masks.

America’s daily COVID-19 death toll breached 4,000 for the first time the day after the riots, but experts say it could be up to two weeks before the true transmission effects of the incident become clear.

Robert Redfield, director of the Centers for Disease Control and Prevention, warned on Friday: ‘You have to anticipate that this is another surge event.’

‘Then these individuals all are going in cars and trains and planes going home all across the country right now,’ Redfield added. ‘So I do think this is an event that will probably lead to a significant spreading event.’

Coleman’s announcement came the same day that Speaker Nancy Pelosi and Democratic leaders have set up fast-moving floor votes that that will force House Republicans to cast votes both on President Trump‘s fitness for office and on whether to remove him during his final days in power.

The latest text of the impeachment resolution cites the post-Civil War 14th amendment, noting it ‘prohibits any person who has ‘‘engaged in insurrection or rebellion against’’ the United States from ‘‘hold[ing] any office . . . under the United States’’.

Pelosi’s plan was to first try to bring up the resolution formally requesting Vice President Mike Pence invoke the 25th Amendment through the request, then follow up by bringing it before the full House.

But Republicans stifled her effort, which sets up a vote for Tuesday instead.

The backdrop for Monday’s move was a House chamber still scarred by the violence of last week. The violent clash that resulted in broken windows and the shooting of a Trump supporter took place just feet away, outside the Speaker’s lobby.

The House chamber is still scarred both physically and psychologically from last week’s attack, which saw five people die.

Additional footage released over the weekend showed how close lawmakers were to be swarmed by the mob.

Lawmakers, their staff, and Capitol Police are angry and traumatized in the aftermath.

Additional security measures have been put into place, including seven-foot anti-climbing fences around the Capitol complex.

National Guard units have arrived to help guard the building through January 20th, which is when President-elect Joe Biden takes the oath of office. 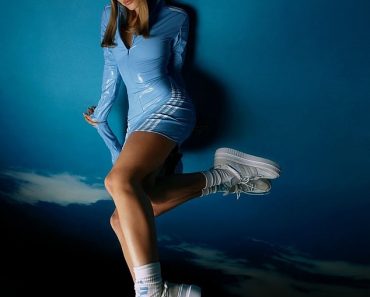 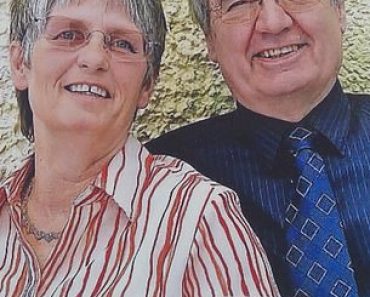 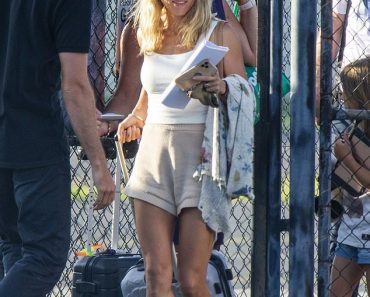 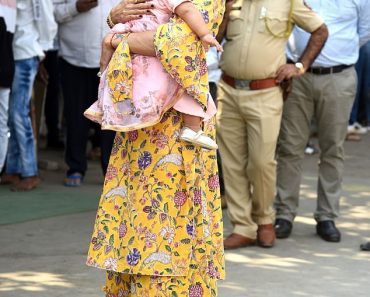 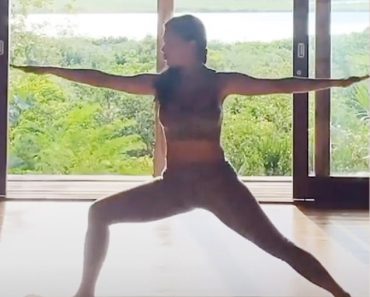