Hundreds of National Guard troops are sleeping on the stone floor of the US Capitol as security intensifies in Washington DC and the capital goes into lockdown a week out from Joe Biden’s inauguration.

The troops, which descended on DC in the wake of last week’s MAGA mob riots, were spotted cradling their weapons as they slept on the floor of the Capitol on Wednesday morning.

It is reportedly the first time troops have set up camp in the Capitol since the Civil War.

The National Guard has been authorized to send a total of 15,000 troops to Washington to help safeguard the capital ahead of Biden’s inauguration.

The troops, thousands of police officers and layers of eight -foot anti-climb steel fencing are among the reinforcements being used to fortify DC a week out from the inauguration in a bid to protect the capital from any potential violence. 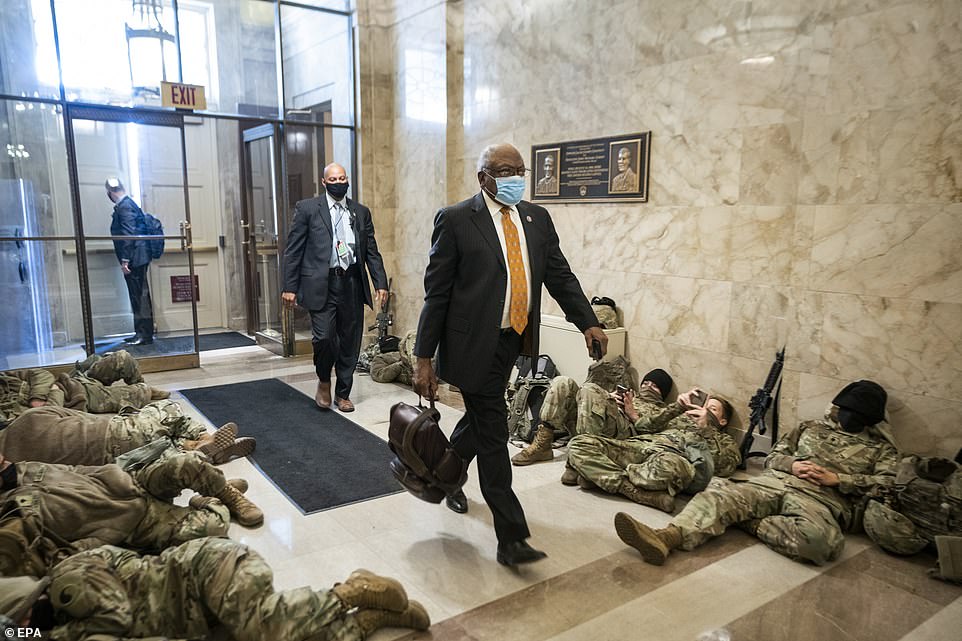 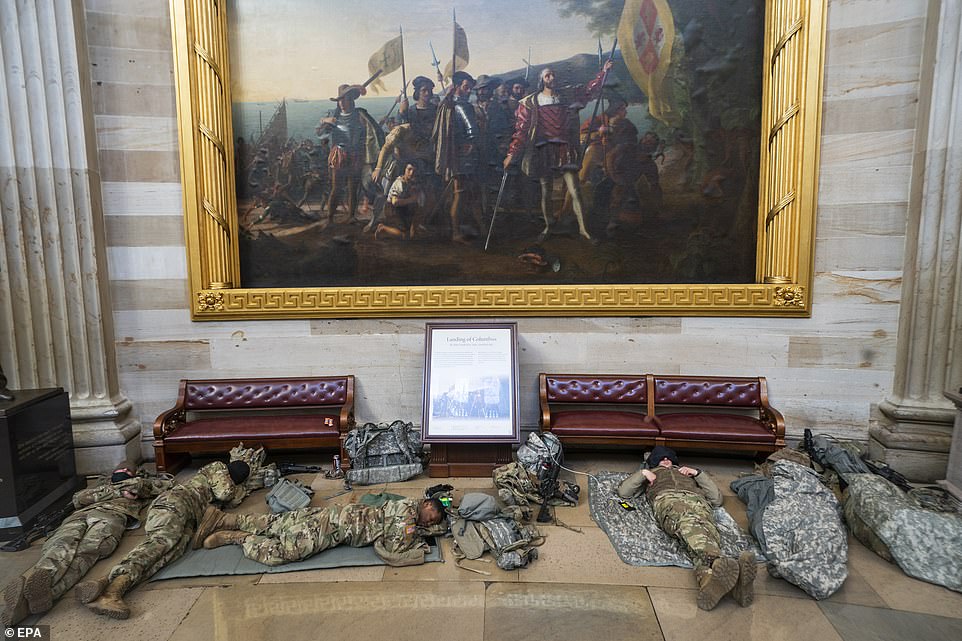 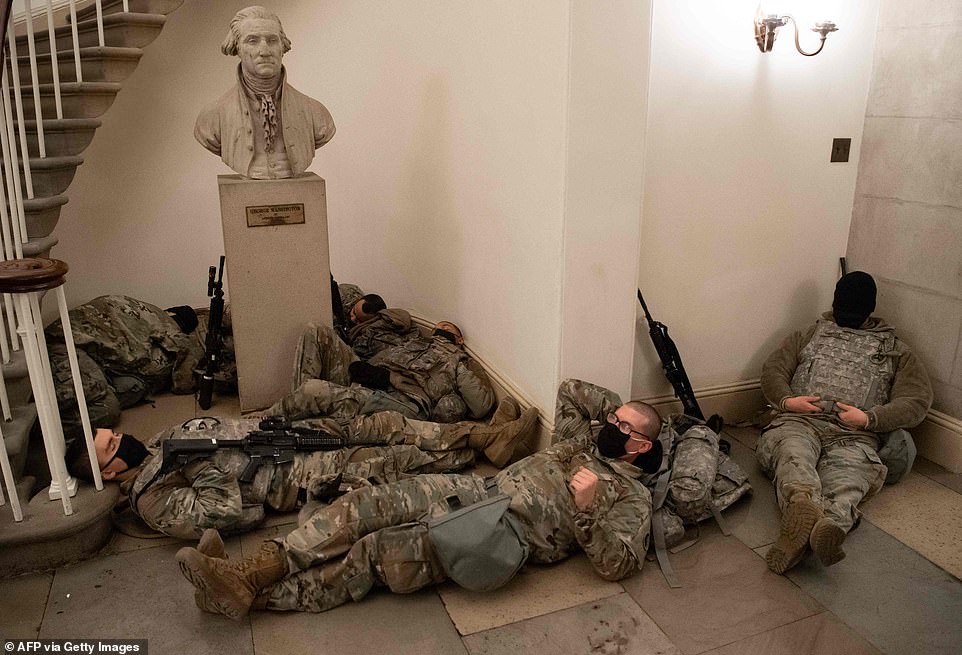 ‘I want to send a clear message to anyone contemplating violence, threats of violence or other criminal conduct: We will have no tolerance whatsoever for any attempts to disrupt the peaceful transfer of power… including attempts to forcefully occupy government buildings,’ Rosen said. ‘There will be no excuse for violence, vandalism or any other form of lawlessness.’

The Secret Service will take control of inauguration security preparations from today and road closures are now in effect across parts the downtown Washington DC area until after the inauguration.

The increased security measures are being implemented days earlier than scheduled as a direct result of last week’s deadly Capitol siege at the hands of Trump-supporting rioters.

Restricted areas have already been established around the White House and Capitol grounds with extra security screenings in place for those trying to get access.

Eight-foot steel fences that are nonscalable have already been erected around the White House, Capitol and other federal buildings including the Supreme Court.

National Guard troops and other law enforcement have been patrolling these areas all week.

Road closures surrounding the White House and Capitol came into effect late Tuesday and will remain in place until after the inauguration.

Access to all roads, parking garages and loading docks surrounding the White House will be banned from Thursday morning.

Authorities say that any vehicle within that restricted area will be stuck there until after the inauguration. The restrictions apply to both residential and commercial buildings.

Further perimeters and additional road closures are expected in the coming days. 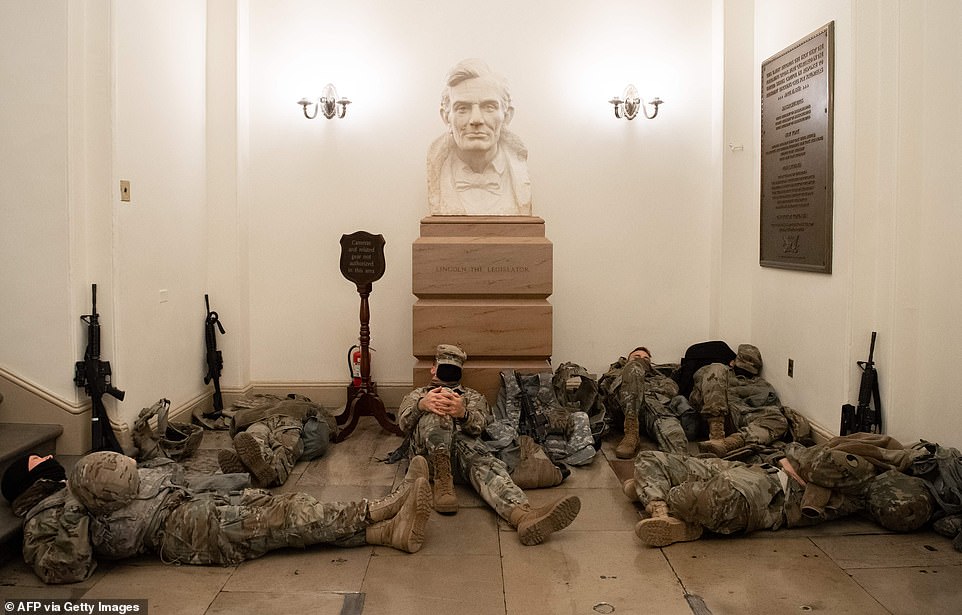 The National Guard has been authorized to send a total of 15,000 troops to Washington to help safeguard the capital ahead of Biden’s inauguration 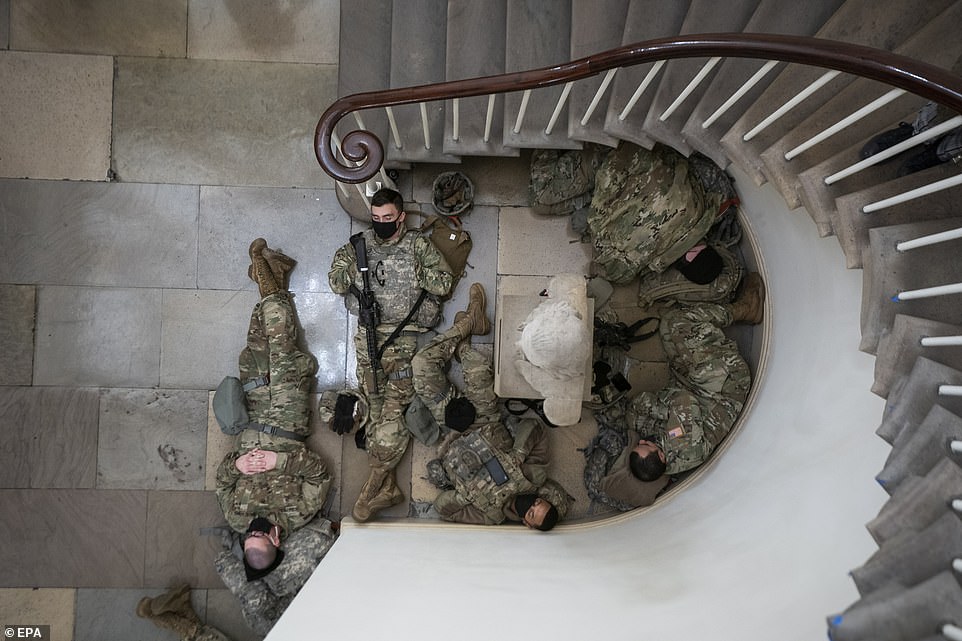 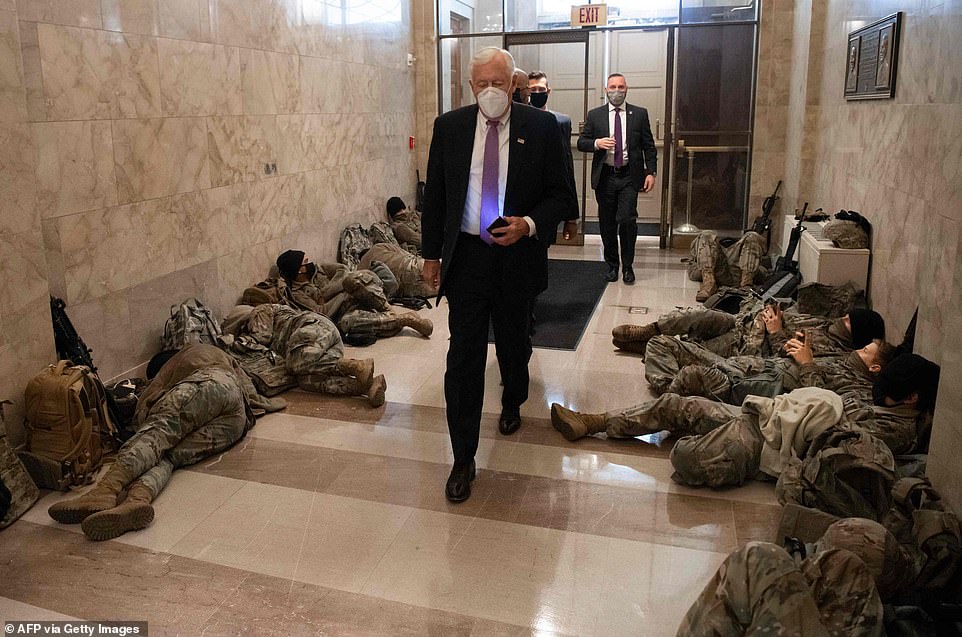 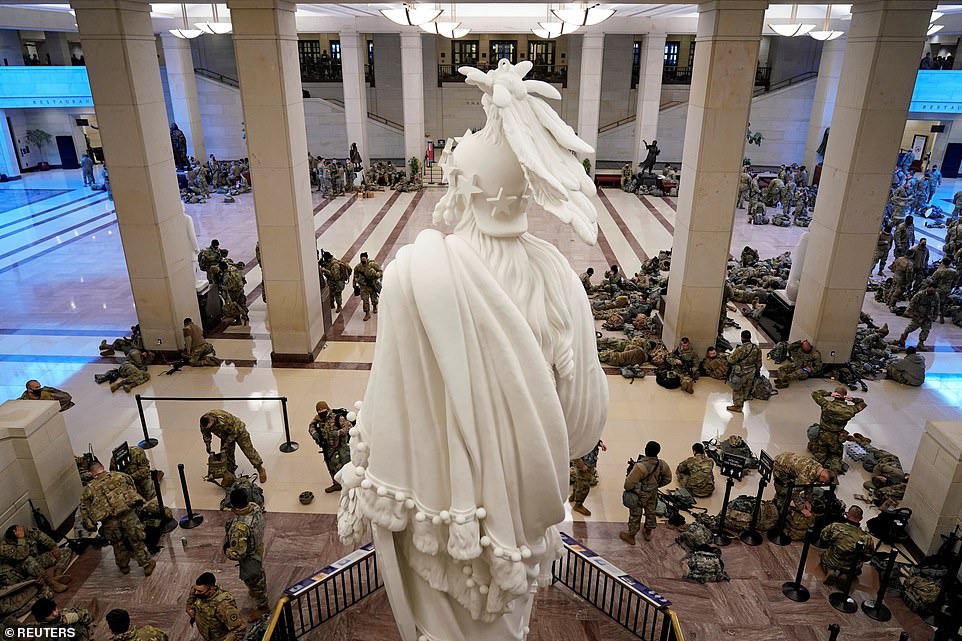 The troops, which descended on DC in the wake of last week’s MAGA mob riots, were spotted cradling their weapons as they slept on the floor of the Capitol on Wednesday 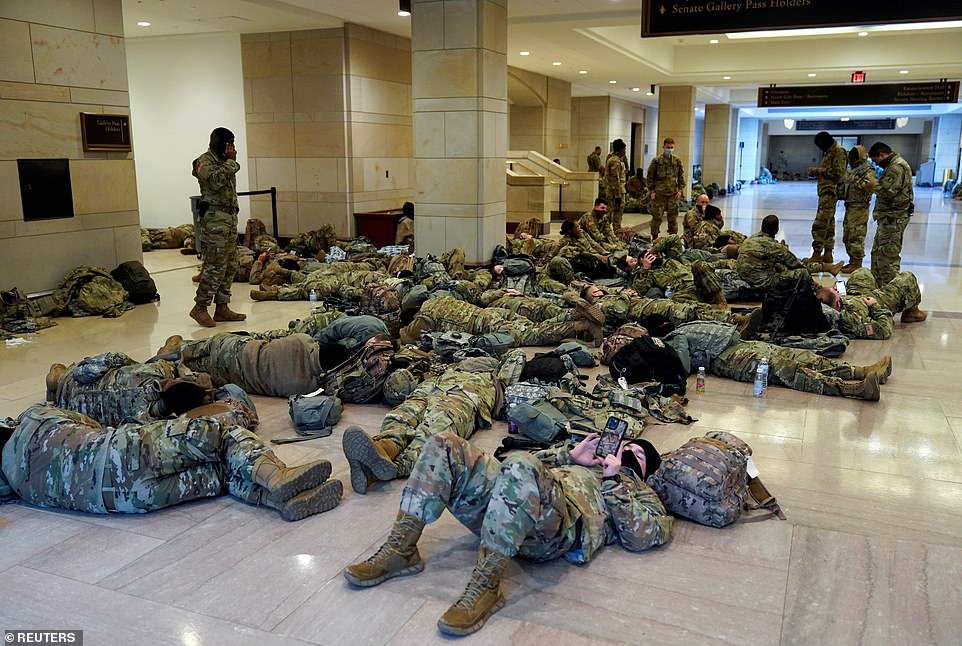 They are among the 50 agencies and private companies that have formed a Multi-Agency Command Center to fortify DC ahead of the inauguration.

Officials are promising extremely tight security around the entire capital region that will include increased law enforcement, extra checkpoints, fencing and barricades across the city.

The public is now banned from entering the Capitol grounds and the inauguration will be a ticketed-only event.

Access to the Washington Monument is also now prohibited for the next two weeks due to ongoing threats.

Public access to roads, parking areas and restrooms on the National Mall, which is where crowds of supporters usually gather during inaugurations, may be shut down this week if deemed necessary.

While next week’s event was already going to be pared down because of COVID-19, authorities say the increased security means Biden’s inauguration will look drastically different to previous ones.

The inauguration is being held at the same spot at the US Capitol where the violent MAGA mob rioters overran law enforcement last week and stormed the federal building.

US Secret Service special agent in charge Michael Plati, who is leading the inauguration security, insists such security breaches won’t occur at the January 20 inauguration.

Some of the heightened security measures will be obvious: officers in uniforms, checkpoints, metal detectors and fencing.

But he says some won’t be so obvious.

While law enforcement never go into too much detail about security so would-be attackers aren’t tipped off, Plati said they’ve taken into account the siege.

‘It’s a poignant reminder of what can happen.’ 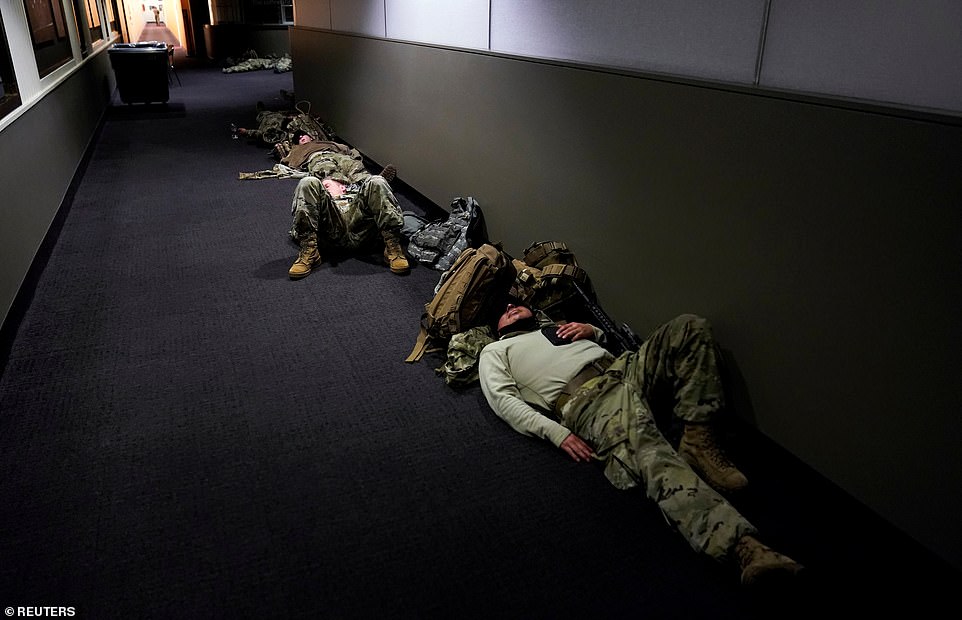 On Wednesday morning, members of the National Guard are pictured sleeping in the Dirksen Senate Office Building 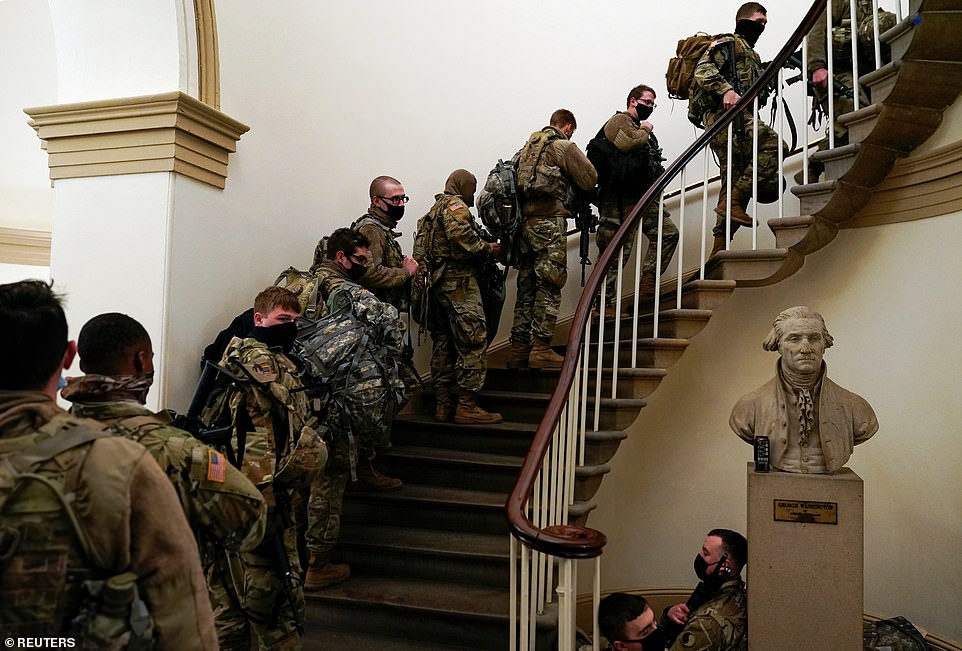 The National Guard has been deployed to D.C. ahead of next week’s inauguration of President-elect Joe Biden

Plati said last week’s Capitol siege and the inauguration aren’t even comparable from a security standpoint.

The inauguration is designated as a ‘national special security event,’ which clears the way for communication, funding and preparation between multiple agencies in Washington, like the Capitol Police, Pentagon, Homeland Security and District-area police.

Other such events are the State of the Union, the Super Bowl and the Democratic and Republican National Conventions.

Last week’s rally turned violent siege was viewed as a free speech event in the days before, despite multiple warnings about the potential for violence from right-wing extremist groups.

Egged on by Trump, the violent mob marched from the White House to the Capitol, where they occupied the building for hours to try to stop lawmakers from certifying Biden’s win.

One of the main problems last week was a lack of coordination by multiple agencies in the district, which won’t happen this time because those agencies have already been approved to work together and have been doing so for months, Plati said.

‘We will have the adequate resourcing, personnel and plans in place,’ he said.

Plati said the event is planned over a year with contingencies and they anticipate the possibility of extreme violence.

‘There’s a variety of methods to ensure that we have a secure, seamless, safe environment for our protectees but most importantly, the general public,’ Plati said.

After Biden is officially inaugurated, he, Vice President Kamala Harris and their spouses will lay a wreath at the Tomb of the Unknown Soldier in Arlington National Cemetery.

They will be joined there by former Presidents Barack Obama, George W. Bush and Bill Clinton and their wives.

Plati said they’re prepared for the group to shift to Arlington – and for the possibility of threats to shift with them. 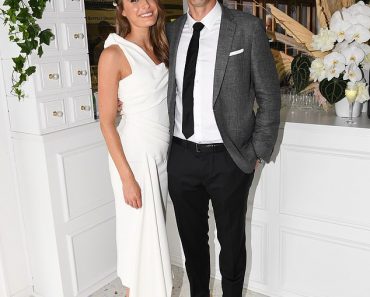 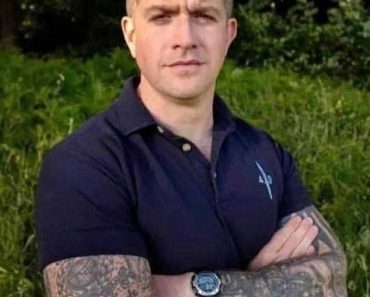 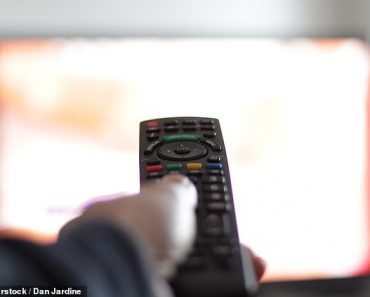 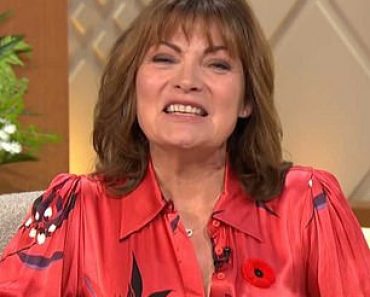