She has recently been rocking a number of brightly colored wigs, while also experimenting with a bold makeup palette.

But on Thursday, singer Halsey kept things decidedly low-key as she was spotted grabbing Starbucks with her very short hair ‘do, and a 50s-style bowling shirt.

The 26-year-old looked as though she was on her way to an audition for the musical Grease as a Pink Lady as she held her beverage while walking about in Sherman Oaks, California.

Pink Lady! Halsey shows off her VERY short hair and rocks a 50s-inspired bowling shirt as she grabs coffee in LA

It was certainly a more dressed down appearance than what her fans have been used to seeing lately in her Instagram account.

Earlier this week, the hitmaker recorded a bold makeup tutorial for her more than 22.7 million fans on Friday, she opened up about her life in quarantine and her favorite products as a teenager.

While showcasing her upcoming beauty collection, About-Face, which launches next week, she revealed she ‘mostly used drug store makeup’ growing up because it was all she ‘could afford.’ 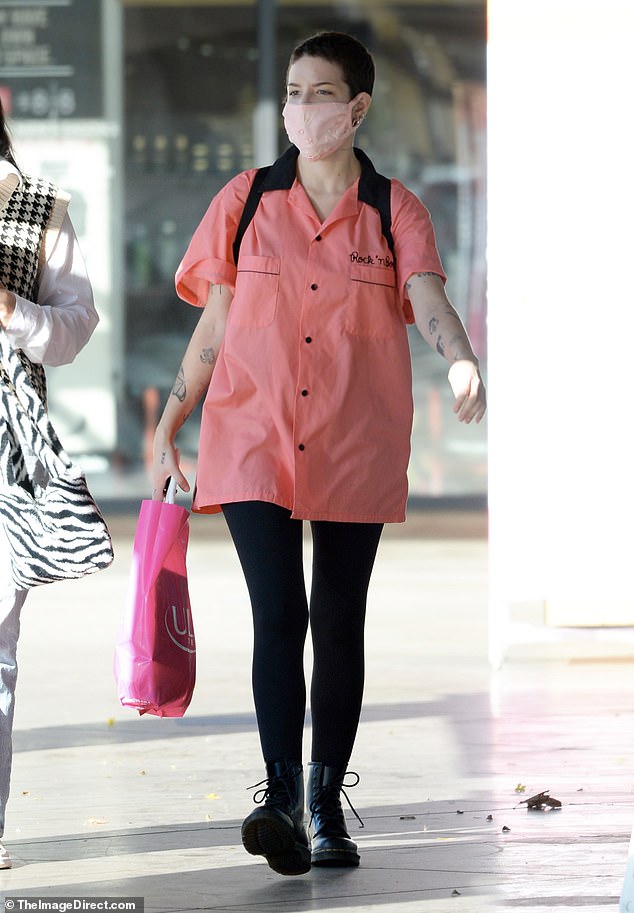 Auditioning for Grease? The singer went for a 50s-style ensemble as she walked about LA 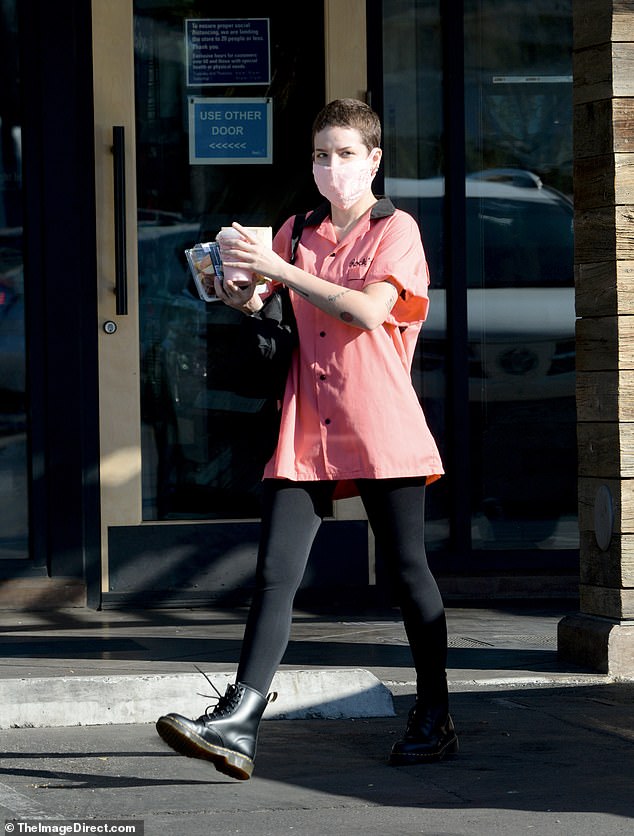 Grab and go: The pop singer juggled snacks and a beverage as she left a Starbucks

‘I remember one time I saved up, like, $27 to buy a MAC eyeliner and it was like the best day of my life,’ she recalled, before noting many of her makeup inspirations were in emo bands.

She revealed: ‘I always wanted my makeup to look like Panic! At The Disco!’

Additionally, Halsey said she would practice drawing roses and spiderwebs around her eyes at a young age. 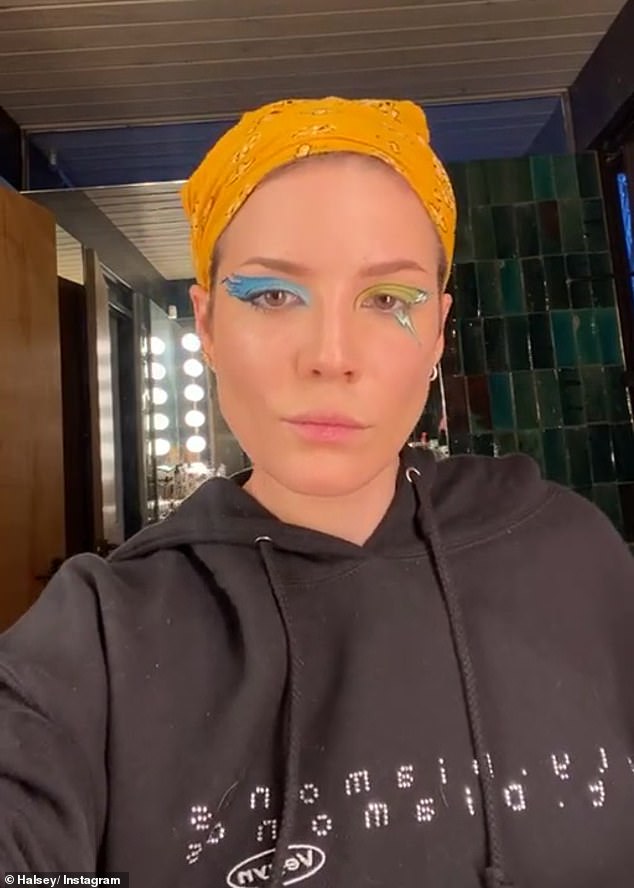 Multi-talented: Halsey showed off her pro-level makeup skills in a rare Instagram Live, which allows users to broadcast videos in real-time to their followers on the platform 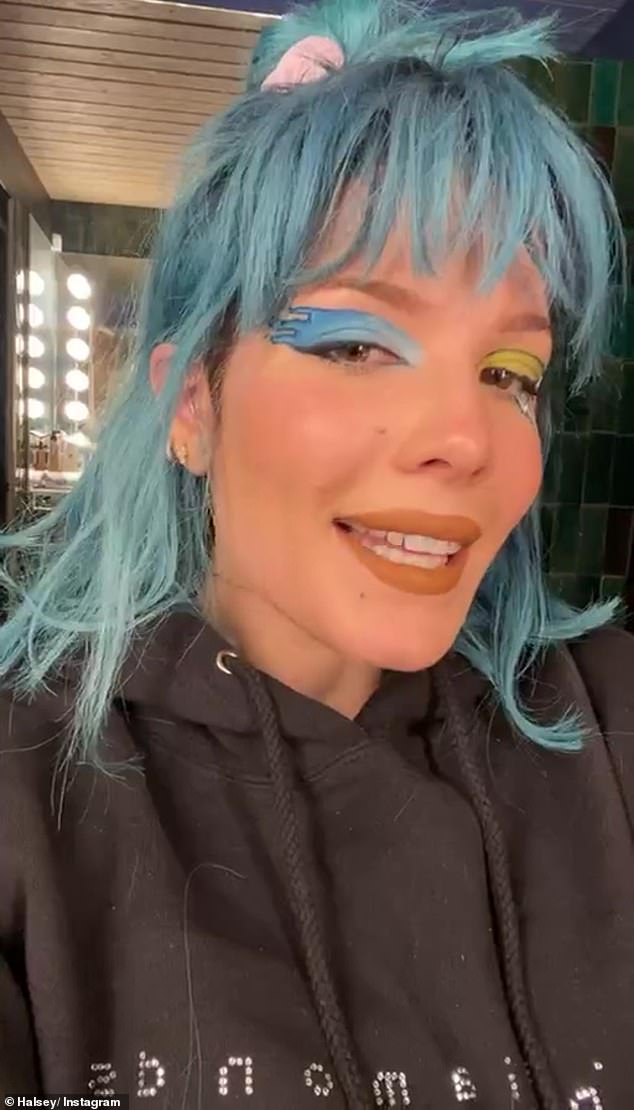 New makeup line: As the 26-year-old singer recorded a bold makeup tutorial for her more than 22.7 million fans on Friday, she opened up about her life in quarantine and her favorite products as a teenager

When one of her followers commented pointed out she was taking a ‘really long time’ to do her makeup, Halsey admitted it had been awhile since she applied a glam look on herself.

‘Ironically enough, I haven’t done my makeup in awhile, which is funny since I just launched a makeup company. I’ve been home and in bed all the time,’ she said. ‘So, I haven’t had a real reason to do it, so here we are.’

She also said she has been eating ‘Oreos and peanut butter every single day’ and enjoying bagels amid the ongoing COVID-19 pandemic. 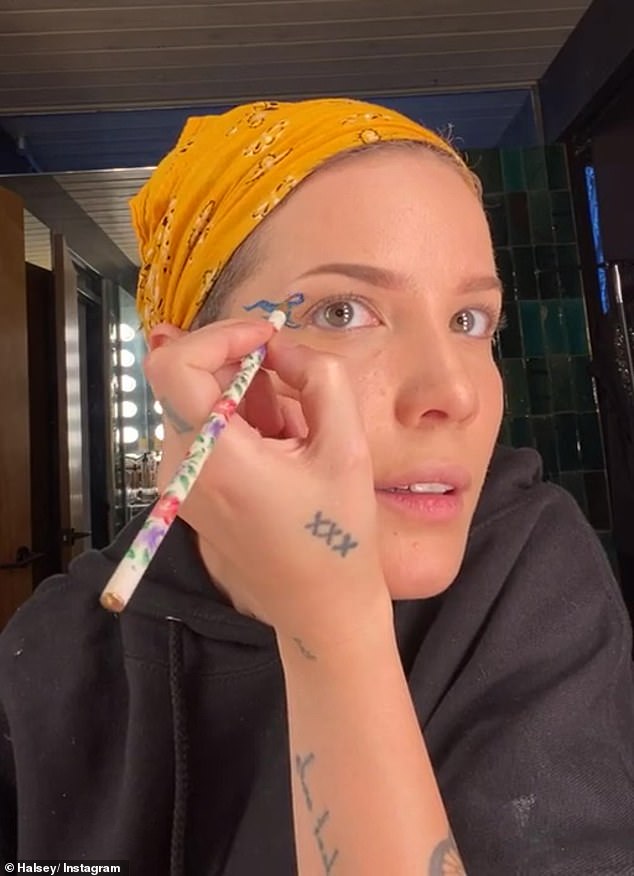 Getting ready: While showcasing her upcoming beauty collection, About-Face, which launches next week, she revealed she ‘mostly used drug store makeup’ growing up because it was all she ‘could afford’ 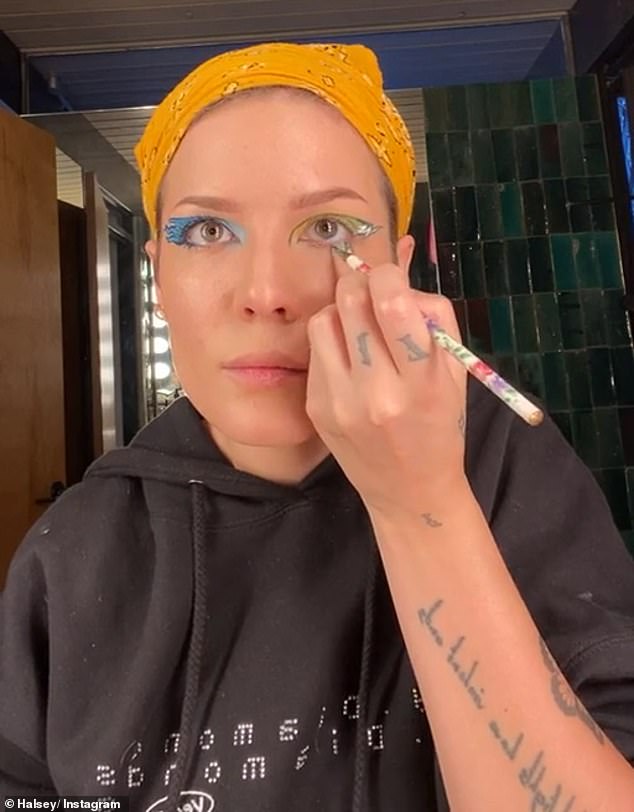 ‘I remember one time I saved up, like, $27 to buy a MAC eyeliner and it was like the best day of my life,’ she recalled of her childhood, before noting many of her makeup inspirations were in emo bands

At one point, after someone asked about her plans to celebrate her third album Manic’s one-year anniversary, on January 17, she admitted to forgetting the date entirely.

The star, whose upcoming beauty brand is centered around self-expression and experimentation, applied shades of About-Face Shadowstick in green, gray-blue, bright blue and matte black on her eyelids. 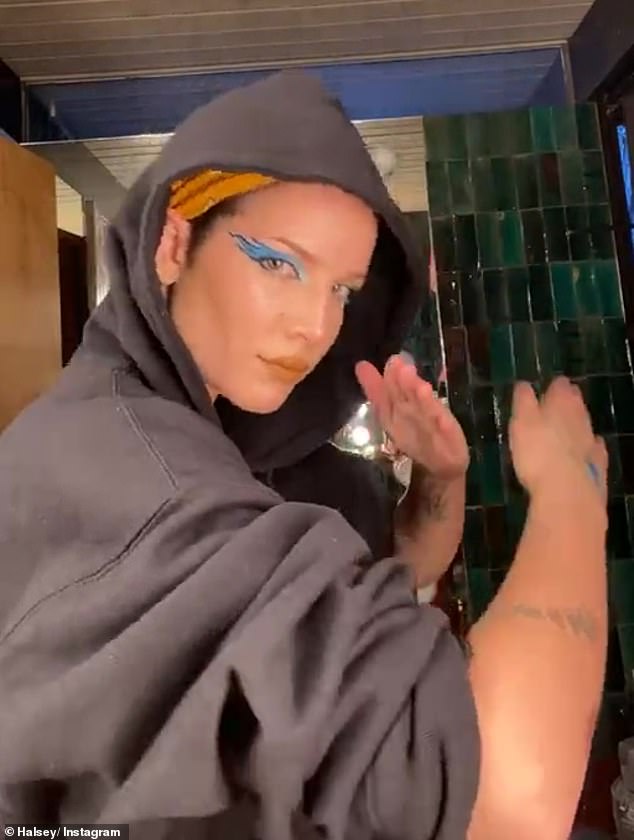 Inspiration: She revealed: ‘I always wanted my makeup to look like Panic! At The Disco’

In the final minutes of her 50-minute mismatched eye shadow tutorial, she playfully added a stunning bright blue wig to her look.

Earlier this month, she took to her Twitter account to express her enthusiasm for the arrival of the line and made multiple comments about various aspects of the brand’s creation process.

The hitmaker also shared a number of promotional shots for the brand, all of which she personally did the makeup for. 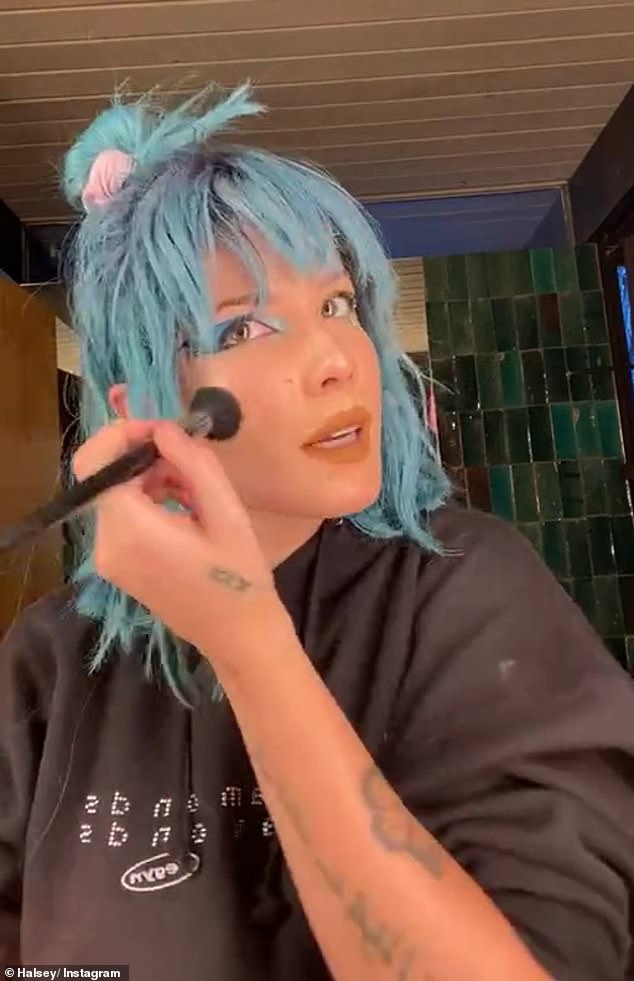 Honest: When one of her followers commented she was taking a ‘really long time’ to do her makeup, she admitted it had been awhile since she applied a full glam look on herself

In one of her tweets, the singer explained that she had exerted full creative control over the creation of the products and that she relied on her extensive background in makeup design to fully realize the potential of her new line.

She tweeted: ‘I am a student and a lover and every detail of this from shade names, to product ingredients, to packaging was me. I am so happy I could faint. Thanks for being so excited with me!!!!!’

The Closer songwriter also tweeted about her vision for the line, noting that the About-Face products were developed to achieve a certain aesthetic, as opposed to making users look better. 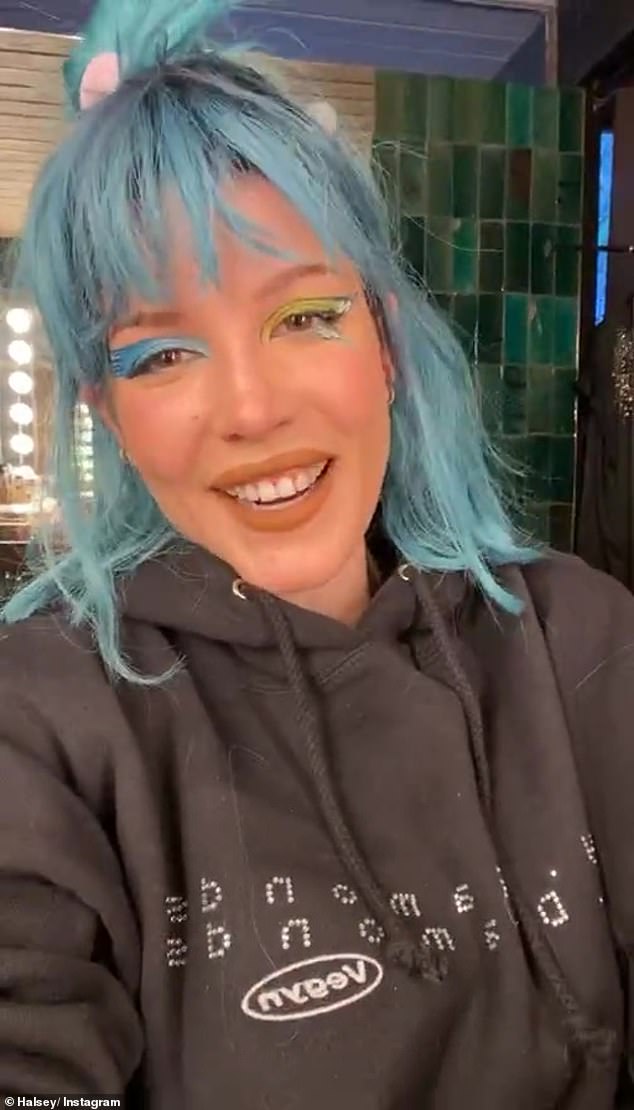 Opps: At one point, after someone asked about her plans to celebrate her third album Manic’s one-year anniversary, on January 17, she admitted to forgetting the date entirely

‘I believe makeup is about feeling cool, not looking perfect,’ she wrote.

The singer also posted a number of promotional images to her Twitter account, noting that she had done all of the makeup work on the models by herself.

The brand’s website notes that the products are meant to be used by different types of people and that it welcomes experimentation with its products.

Another step forward: The songwriter noted that she had been practicing with makeup for the majority of her career and that she had full creative control over the creation of the beauty line 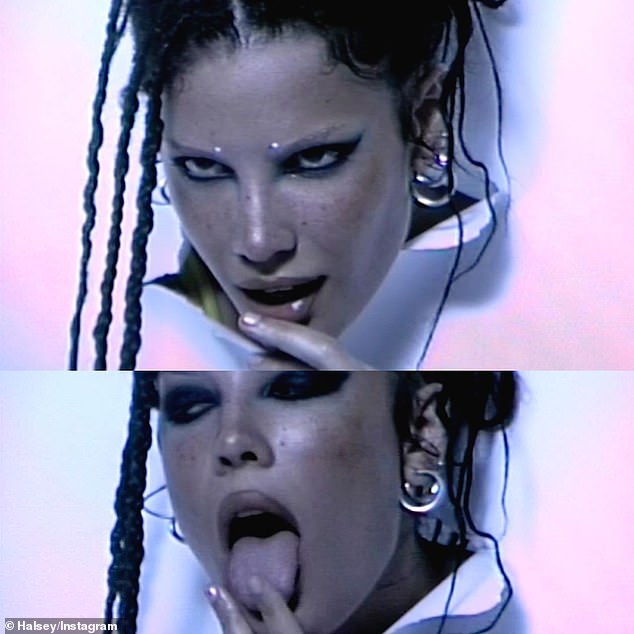 Strong opinion: Halsey stated that the About-Face products were formulated so users would be ‘feeling cool, not looking perfect’

In an interview with Byrdie, the musician discussed how her status as a performer inspired her to create makeup that reflected her desire for authenticity and staying true to one’s own self.

‘You want to look like yourself, not look like someone else. And getting to sit down with your face every day and get to know it and what you look like…it definitely helps with your sense of identity, and makes you feel more accepting,’ she stated.

The blend of the products was especially important to Halsey, who was attempting to find a balance of good-looking makeup and material that would help her shine more on stage, even from a distance. 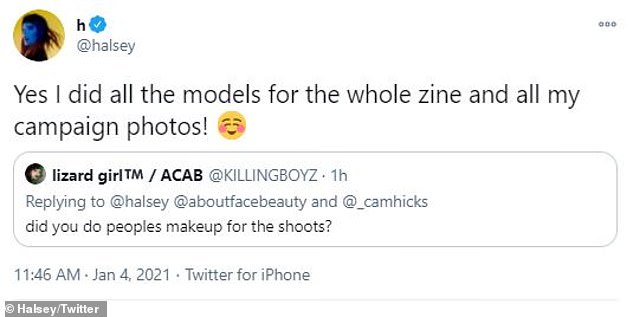 Doing it herself: The songwriter noted on her Twitter account that she had done all of the makeup work for the brand’s promotional photos 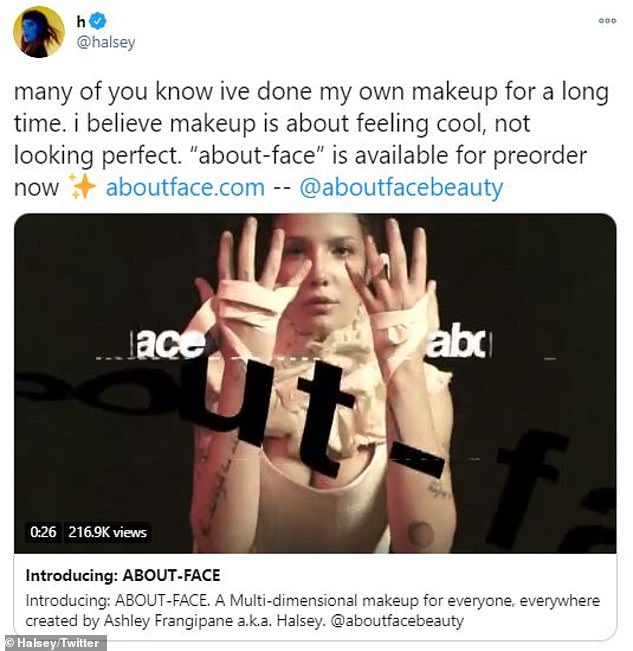 Staying original: Halsey also stated that the products from About-Face would not make the users ‘look like someone else’

The songwriter noted: ‘I was mixing a highlighted primer with a liquid highlight, and then a cream highlight, and a powder highlight. I was just going crazy because I wanted people to be able to see my cheeks glint from the nosebleed seats. And there are pictures—they did.’

The Bad At Love songwriter made a point of selecting ingredients for her products that were non-toxic and safe for anyone to use, which she elaborated on during the interview.

‘I have an autoimmune illness, so I’m very sensitive to what goes on my face…and a lot of my audience, they’re really young, and I just don’t want anyone putting stuff on their face that’s going to hurt them down the line,’ the singer said.

The songwriter also spoke about the various inspirations she had for the line during it’s creation, stating that: ‘I’m just paying homage to the style of makeup and the makeup influences that I’ve always loved: very ’90s-heavy, very Myspace scene queen, very emo revival.’

Although the singer intended the products to be used by anyone, she placed a special emphasis on those who follow more current fashion trends and stated that she had a special affinity for those who took chances with their fashion styles.

She said, ‘It’s something for the generation of e-girls and e-boys out there…I’m watching you. I would have been friends with all of you 10 years ago. I love you.’ 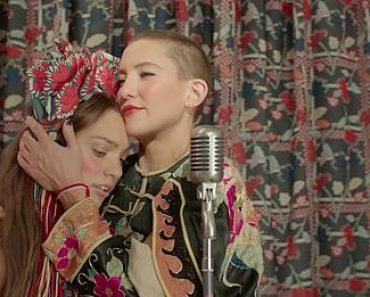 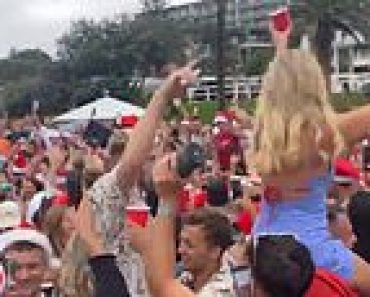 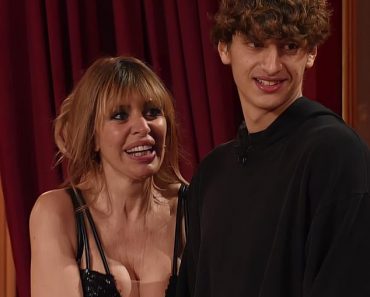 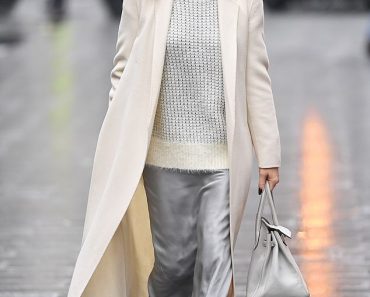 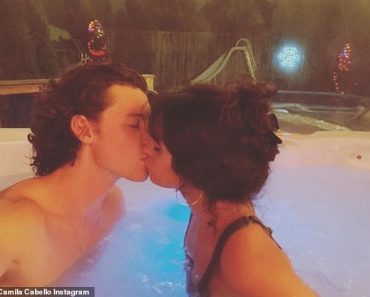