If you are in the market for a flagship Bentley that’s a beauty but not too much of a beast, then the elegant new V8-engined version of the flagship Flying Spur limousine may be just the job.

This is Money had the chance to compare the healthy-eating option of the beefiest of Bentleys with the unreconstructed meaty W12 version driven back in Autumn 2019 – which now seems a lifetime ago – before the pandemic.

Priced from just over £150,000, the V8 is around £21,500 less expensive than the guns-blazing 12-cylinder version. So should you be going for the diet option or the full-fat course on Bentley’s menu?

Bentley’s diet Flying Spur: This is the British brand’s new V8 version of the Flying Spur. Is it a better all-round choice than the full-fat W12 variant, which costs an extra £21,400? Ray Massey has had a chance to find out…

Measures taken by Bentley from last year means Flying Spur production at Crewe has continued despite the impact of coronavirus – and we’ve managed to get our bum in the seat of the British limo ahead of customer orders arriving.

Forget keeping up with the Jones’s – parking a Bentley Flying Spur on your driveway will have you overtaking your next-door neighbours in no time.

Our test car, finished in a fetching metallic shade called Camel is an elegant barge. There’s even a little bit of theatrical magic as the gorgeous ‘Flying B’ at the prow retracts beautifully into the bonnet when you park up.

From the outside, apart from the ‘V8’ badge and new quad oval tailpipes, you’d be hard-pushed to spot the difference between it and the mightier W12.

However, that all changes once you’re behind the wheel and motoring. 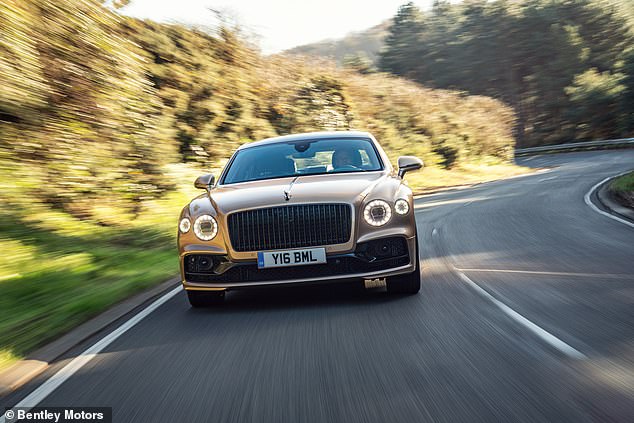 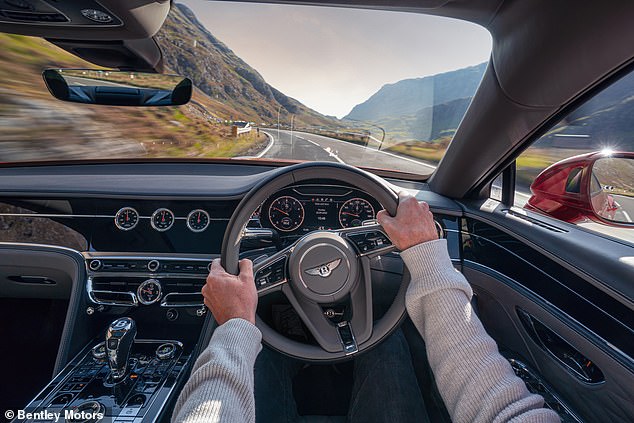 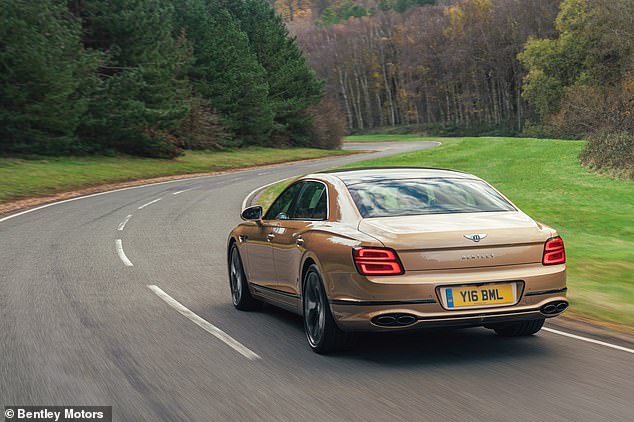 From the outside, apart from the ‘V8’ badge and new quad oval tailpipes, you’d be hard-pushed to spot the difference between it and the mightier W12

The leaner but just as mean V8 aims to be more ‘driver centric’ – says Bentley – to attract those owners who want to enjoy being at the controls, and not just sitting back reading a paper while a chauffeur does all the work.

The 4.0-litre eight-cylinder motor under the enormous bonnet is the same one used in the new Bentley Continental GT, producing 550 horsepower.

Linked to a fluid 8-speed dual clutch automatic gearbox, there’s no questioning the Flying Spur’s thoroughbred characteristics, providing maximum power through the most efficient use of effort.

Will it fit in my garage? New Bentley Flying Spur V8 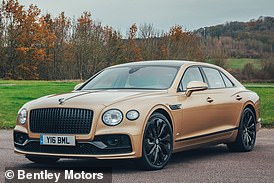 Back in late 2019, we drove the original no-holds-barred 6.0-litre 635 horsepower W12 version of the Flying Spur in the tax-exile haven of Monte Carlo and out along the elegant French Riviera.

However, for our post-Brexit drive of Crewe’s finest craftsmanship, we swapped Monaco for Surrey – home to some fine British vineyards, down the beautiful raised spine of the Hog’s Back with its own brewery, mixing fast roads and country roads.

It fires up with a lovely engine note that’s full of character without being overly brutish.

Press down on the accelerator and it bounds forwards powerfully but smoothly with its planted all-wheel drive up to 60mph in just four seconds flat which, frankly, is getting into supercar territory.

Where legal, it will propel you to 100mph in an effortless 8.9 seconds. And top speed is 198mph – quite a bit of mass in motion for a vehicle weighing nearly three tonnes – but you’ll need a private track or the de-restricted German Autobahns to try that for real.

The new V8 Flying Spur has the grace and pace of an Olympic athlete breasting the line in a 100-metre sprint rather than raw and almost unrestrained explosive power of the W12 attacking hard in a field sport.

There are three main driving modes selectable from a dial – Comfort, Bentley and Sport – plus a fourth for your own customisation.

Comfort is a delight for wafting at ease without a care in the world as you listen to the fine on-board sound system and will likely be the one your driver will choose to guarantee a jolt-free journey.

But this is a car for driving – so we quickly switched to Sport and felt the sinews tighten.

In our opinion, the real sweet sport is the middle-ground Bentley mode, which combines the best of both worlds, while loosening the reigns enough to allow spirited drivers to enjoy its dynamism. 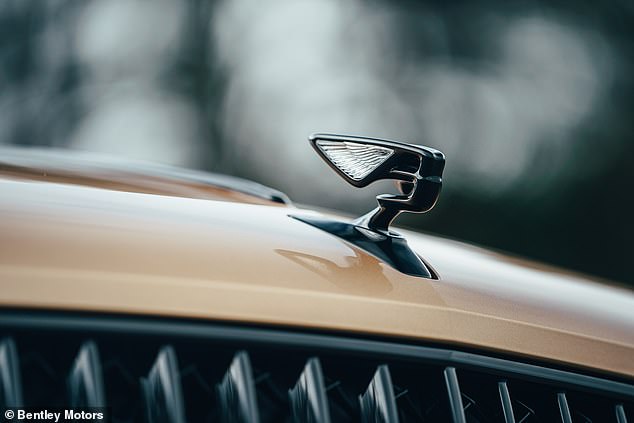 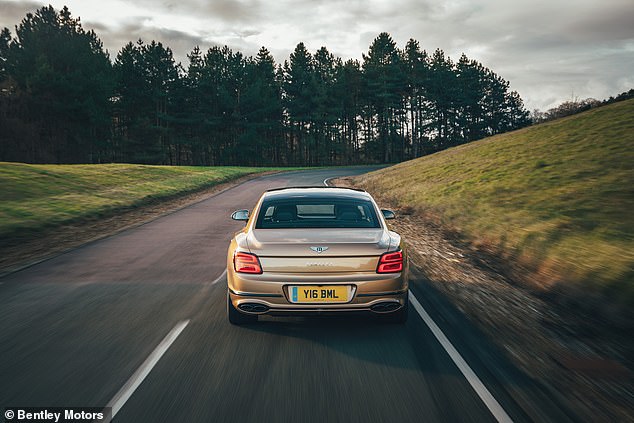 Accelerating from a standstill to 60mph takes just four seconds flat – that’s getting into supercar territory. 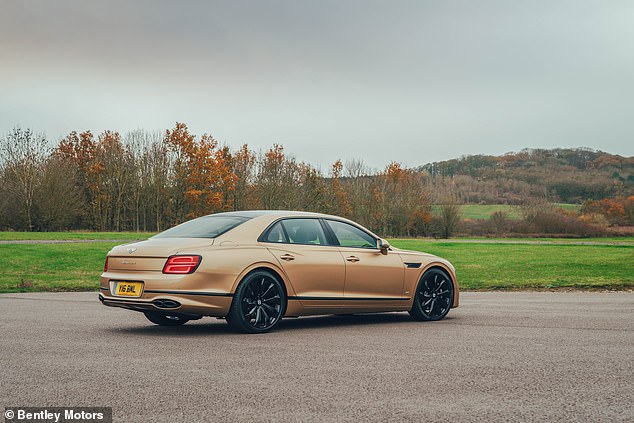 Where legal, it will propel you to 100mph in an effortless 8.9 seconds. And top speed is 198mph – quite a bit of mass in motion for a vehicle weighing nearly three tonnes

Despite plenty of engineering wizardry, the V8 isn’t much more efficient than the W12

Of course, there is also a frugality improvement of losing four cylinders from the automotive ingredients list – though the V8 is far from a fuel-sipper.

The leaner engine, with some hidden engineering wizardry, promises a grand touring range of more than 441 miles with CO2 emissions of 288g/km and 22.2mpg average fuel consumption, meaning less pollution and a longer range between fill-ups.

Much of the economical gains are from the V8’s capability to imperceptibly shut down half of its eight cylinders in 20 milliseconds – one tenth of a blink of an eye – when under light driving load and less strain.

In town, it won’t be guzzling unleaded at the same rate as it would on the motorway.

The proximity of the turbos to the catalytic convertors also reduces cold start emissions, which helps trim the figures. 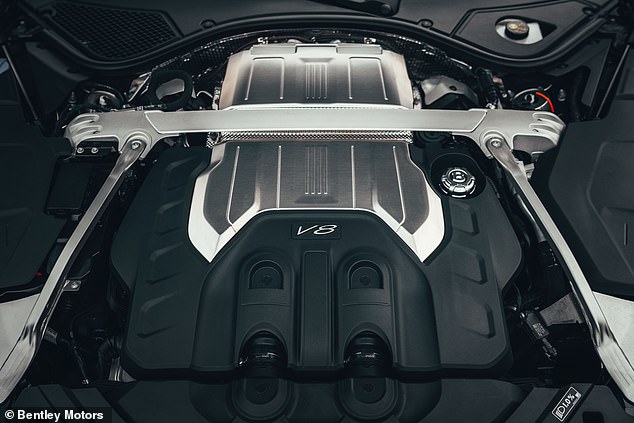 The 4.0-litre eight-cylinder motor under the enormous bonnet is the same one used in the new Bentley Continental GT, producing 550 horsepower 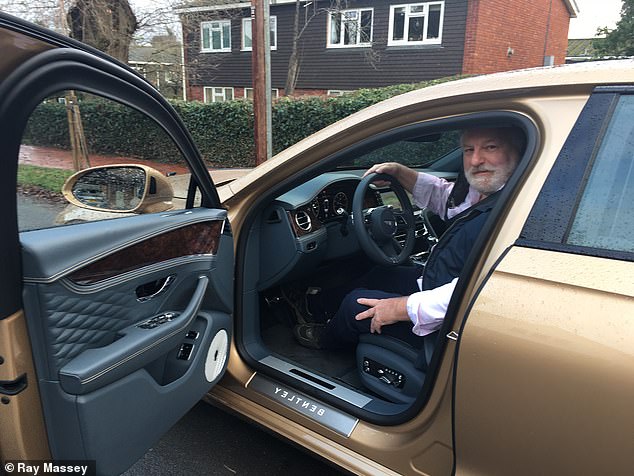 Forget keeping up with the Jones’s – parking a Bentley Flying Spur on your driveway will have you overtaking your next-door neighbours in no time, as Ray found out 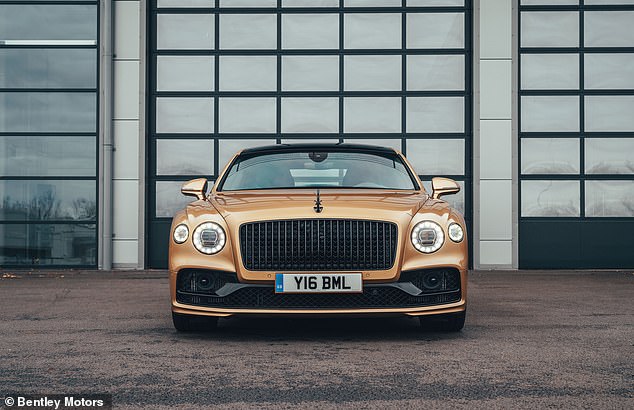 While there’s plenty of engineering wizardry under the bonnet to make the Flying Spur’s V8 engine as efficient as possible, it’s still not that much more economical on fuel than the W12

And Bentley’s bid to cut carbon outputs and boost fuel economy gets even more technical.

Twin-scroll turbochargers mounted centrally in the V provide a rapid response by minimising the distance the exhaust gases travel from the engine to the turbochargers. With turbines operating at up to 950°C – as hot as lava – this produces instantaneous pulling power torque.

Two high pressure fuel pump injectors operate at 14 times the boiler pressure required to move a 60 tonne steam locomotive. The way in which fuel is dispersed across the cylinder means cleaner combustion process and reduced emissions.

Lightweight alloy pistons move at up to 20 metres per second and the iron alloy bore coating just 150 microns thin – similar to the thickness of a sheet of paper – reduces cylinder wear to a negligible level. The car’s frame is also 100kg lighter.

However, given the temptation to drive this car enthusiastically, we suspect you’ll still struggle to meet the claimed figures, despite all the precise engineering efforts back in Crewe.

Contrast that with the W12, which will knock 0.3 seconds off the V8’s 0-to-60mph time (managing it in just 3.7 seconds) and boasting a top speed of 207mph (some 9mph faster) and you’re correct to assume the larger lump is less efficient.

Emissions are higher at 337g/km and it’s less economical with petrol, returning under 19.1mpg. 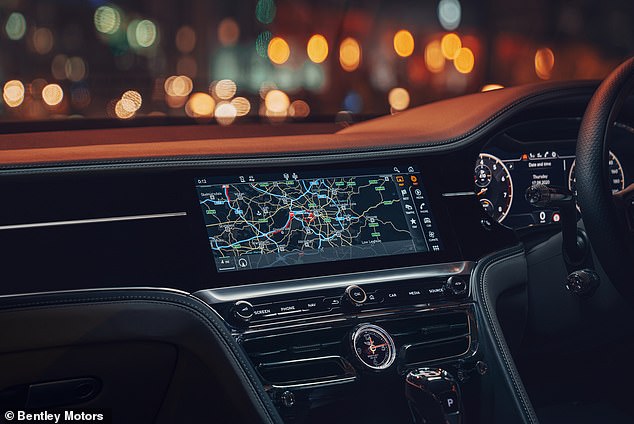 Which ever model you choose, you won’t be short-changed on quality. The Flying Spur is – as expected -finished to Bentley’s extremely high standards 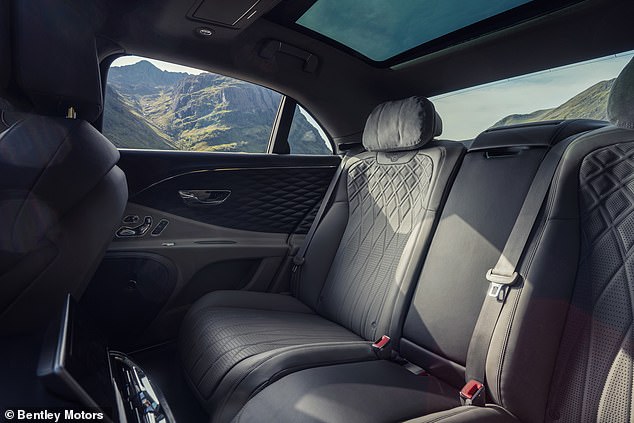 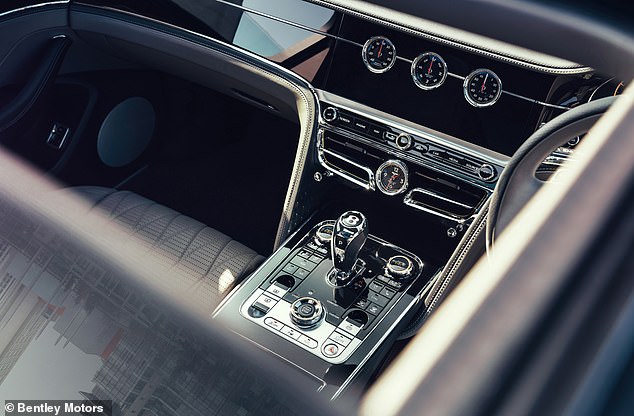 Linked to a fluid 8-speed dual clutch automatic gearbox, there’s no questioning the Flying Spur’s thoroughbred characteristics, providing maximum power through the most efficient use of effort 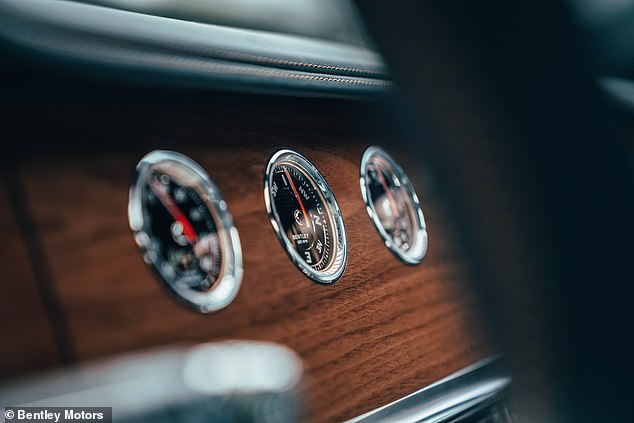 Buyers can choose the Bond-style rotating dashboard and sat-nav display – though this will set you back a whopping £4,820

Is it worth downsizing your Bentley Flying Spur as a penny-pinching exercise?

All of this begs the question, is there really a need for a V8 model (other than to reduce the CO2 emissions across Bentley’s already potent range of cars)?

Value for money-wise, there’s not a lot less bang for your buck from the V8, in our opinion.

You’re certainly not being short-changed on the quality front if you do opt for the less potent powerplant.

Let us assure you from our time at the wheel of the V8, you will absolutely be swathed in glorious luxury.

Each car takes 100 hours to build and has nearly two miles of thread stitching up to 14 leather hides per limousine – the attention to detail is staggering across the entire Bentley range. 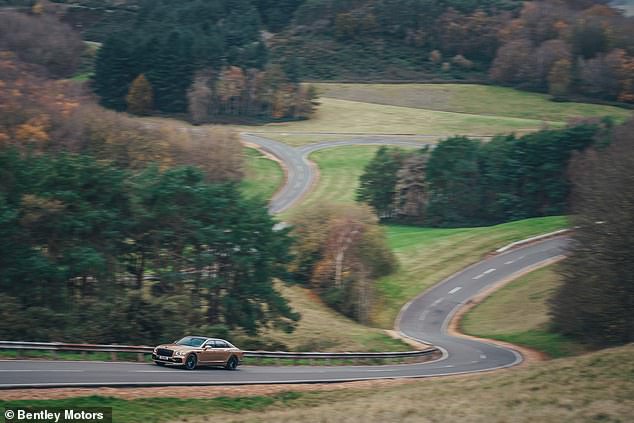 The test car we drove had £42,000 in optional extras – twice the price £21,000 price difference between choosing the V8 and W12 powerplants

And what you do save in engine price you can easily lose to the options list – as we discovered.

The brilliant Bond-style rotating dashboard and sat-nav display – which we’ve talked fondly about in the past – will set you back another £4,820, plus £1,925 for the mood lighting,

An extra £6,660 added the wonderfully-sounding ‘Naim for Bentley’ premium audio system – and that was about as far down the spec sheet we dare look without having to grasp our wallet tightly. 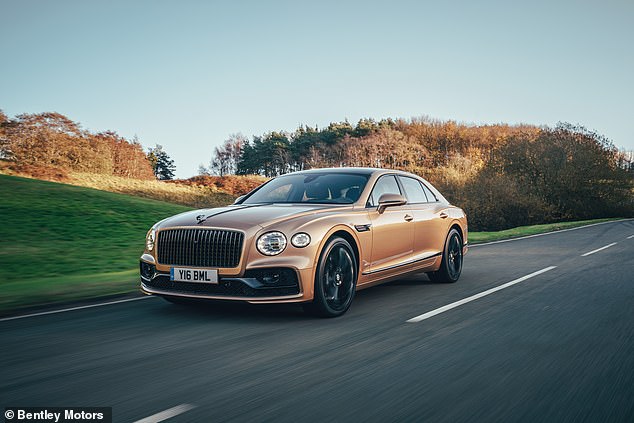 The days of the petrol engine is numbered, so buyers who can should certainly make the most of these wonderfully potent leviathans.

This Flying Spur is almost certainly the last hurrah of a dying breed of limousines as Bentley accelerates towards becoming a ‘fully electrified’ car company by 2030.

And for that reason alone, we’d be tempted to stretch to the W12 Flying Spur to enjoy the maximum full-bloodedness of Bentley’s combustion-engine swansong.

Earlier this month Bentley, employing 4,000 in Crewe, announced record total sales in 2020 of 11,206 vehicles – the highest in its 101-year history and achieved despite the Covid pandemic which forced a factory shut-down.

It marked an increase of two per cent over 2019 and was boosted by the introduction of the Flying Spur which proved ‘a significant contributor to results.’

The V8 version will be expected to turbo-charge that performance.

As part of a wider shake-up German parent company Volkswagen Group announced last month that Bentley will, from spring, fall under the umbrella of its German sibling Audi. 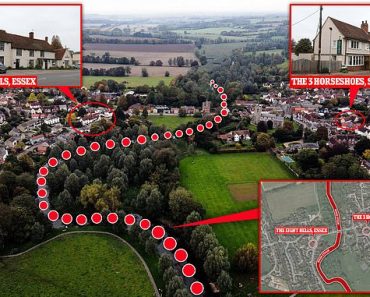 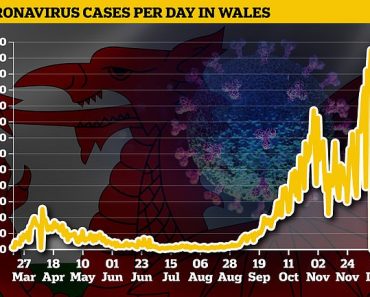 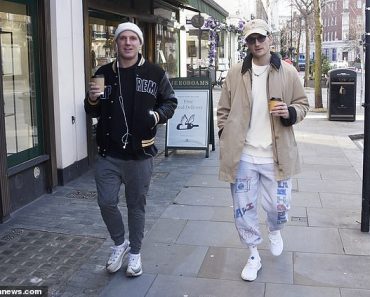 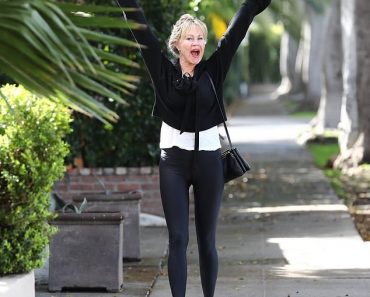