Coronavirus cases are continuing to decline drastically across the United States even as deaths hold steady near peak levels.

On Thursday, a total of 152,478 new infections were reported, according to data from Johns Hopkins University, a dramatic drop from the 232,943 cases recorded just two weeks ago.

In addition, the number of people hospitalized, a key indicator of the disease’s pace, spread and severity, has trended lower, falling 18.8 percent from a peak on January 6 to 107,444, the lowest since December 11, according to data from the COVID Tracking Project.

‘We’re starting to see the light at the end of the horizon,’ New Jersey Governor Phil Murphy told CNN on Wednesday. ‘I think this is now going in the right direction. It’s slow, admittedly.’

However, a total of 3,943 deaths were recorded on Thursday, the sixth-highest number of fatalities recorded in a single day.

Experts say that deaths, which rose in 17 of the 50 states last week, are lagging indicator, meaning they can rise weeks after cases and hospitalizations fall.

On Thursday, a total of 152,478 new infections were reported, which is a dramatic drop from the 232,943 new cases recorded just two weeks ago 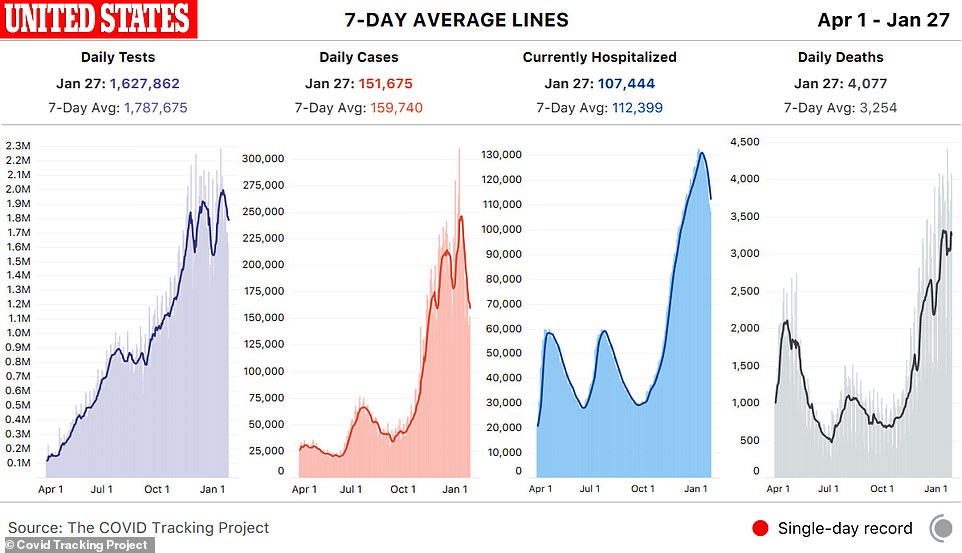 The seven-day rolling average of new cases has declined 31% since three weeks ago and hospitalizations have fallen 18.8% from a peak on January 6 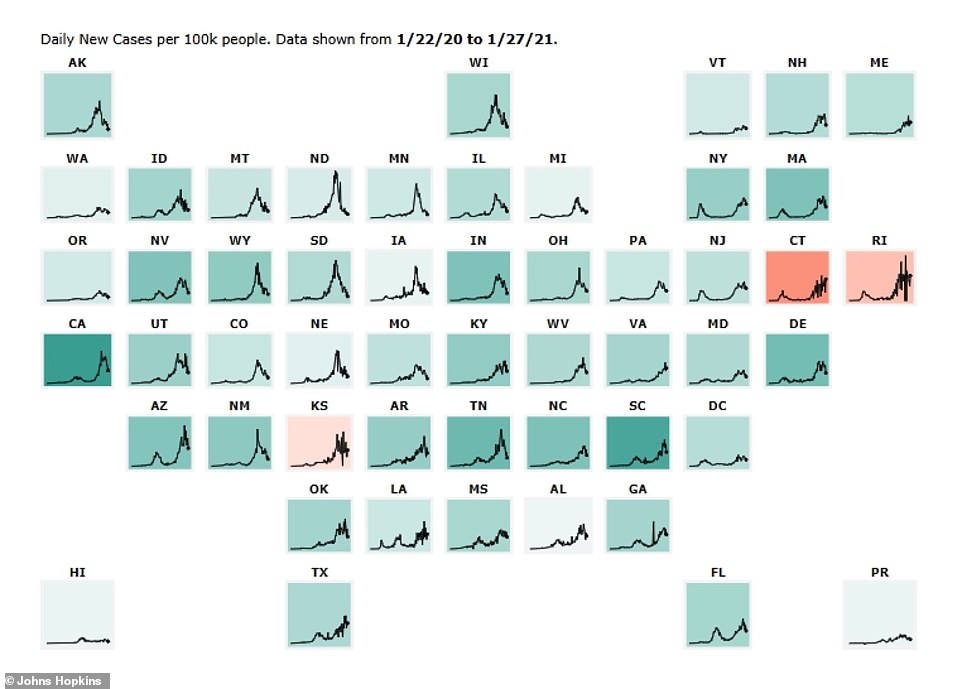 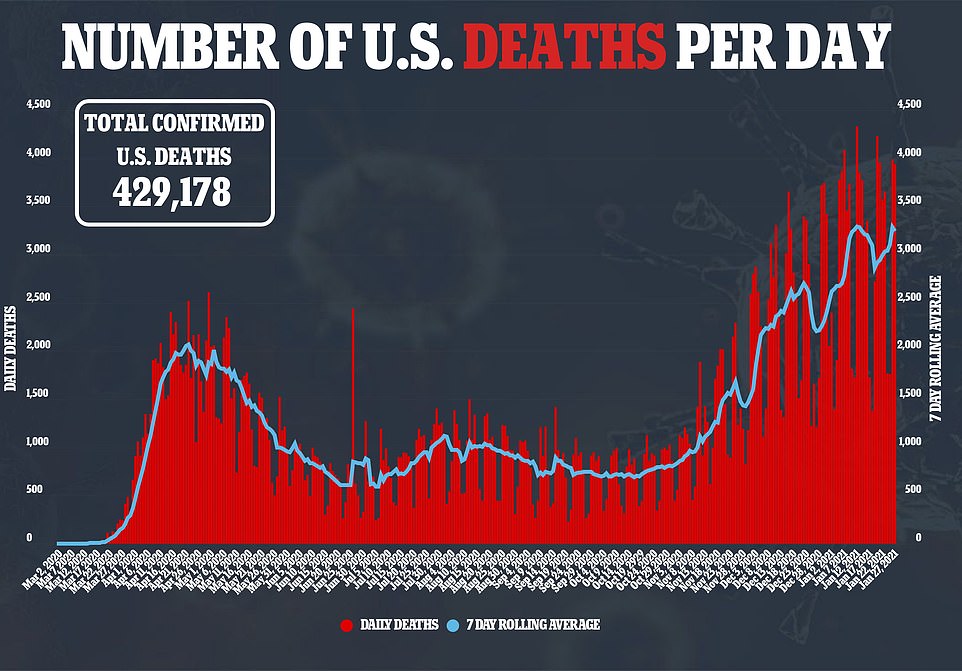 A total of 3,943 deaths were recorded, the sixth-highest number ever, but deaths are a lagging indicator and can rise for several weeks after cases fall

Concerns remain that new variants of the virus from such places as Brazil and the United Kingdom might further spread infection, with at least 313 cases of the UK variant, called B 1.1.7., and one of the Brazil variant, called P.1, so far reported in the U.S.

Models from the Centers for Disease Control and Prevention (CDC) suggest the UK variant could sweep the country and become the dominant strain as soon as March.

But with the cases and hospitalizations on the decline, some U.S. states have slightly eased some of the tightest public health restrictions.

In California, Governor Gavin Newsom this week lifted a stay-at-home order that had affected much of the most populous U.S. state. 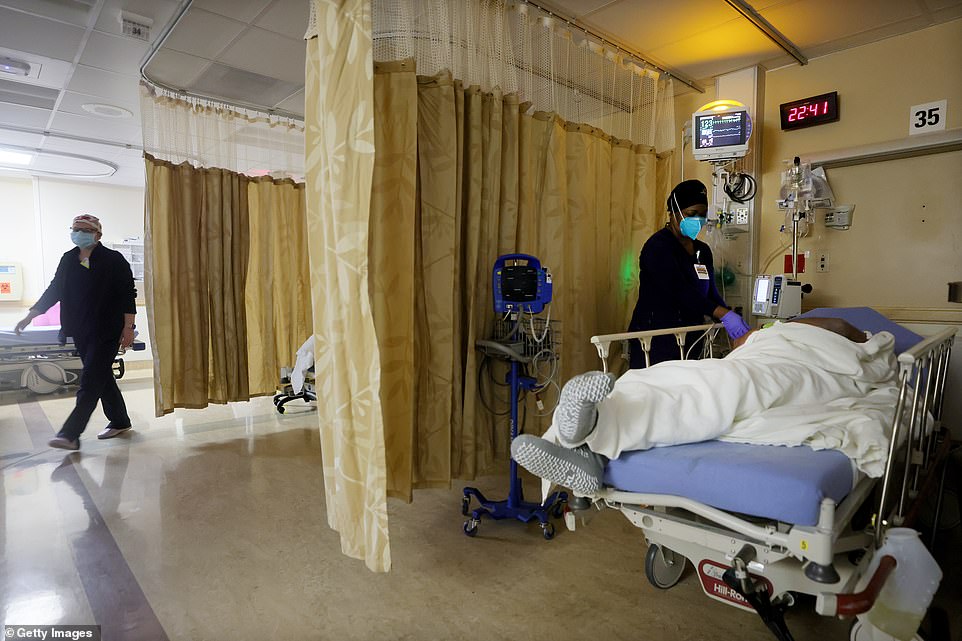 Southern California still has an ICU capacity of zero percent, but Newsom said, as cases fall ICU capacity is projected to rise to 33 percent, according to state models. Pictured: A clinician cares for a patient in a COVID-19 isolation area at Providence St. Mary Medical Center in Apple Valley, in Southern California, January 27

The order allows hair salons to open with modifications and permits restaurants to reopen for patio dining. However many restrictions remain, including a ban on indoor worship services that affects most of the state.

Newsom crafted the stay-at-home order in December as coronavirus cases worsened and in anticipation of surges from holiday gatherings.

He divided the state into five regions and ultimately four of them had the order imposed because their ICU capacity fellow the stat mandated 15 percent. Only rural far Northern California stayed above the threshold.

The turnaround puts California in a starkly different place than it was last month, when some Southern California hospitals overwhelmed by virus patients were crafting emergency plans for rationing care.

With cases leveling somewhat in Los Angeles County, the state’s most densely populated, elementary schools might reach the state’s legal threshold for re-opening within two to three weeks, the Los Angeles Times reported on Wednesday, citing a briefing to the city council by county Public Health Department Director Barbara Ferrer.

Southern California, which accounts for more than half the state population of nearly 40 million, still has an ICU capacity of zero percent, according to state data.

But Newsom said based on state modeling for the next four weeks, as cases fall ICU capacity is projected to rise to 33 percent, the highest of any of the state’s regions.

California’s latest and worst surge of the pandemic started in mid-October. In a little more than two months the state recorded more than two million cases and hospitalizations grew nearly 10=fold to almost 22,000.

As the sickest patients die, the death toll has exploded. The state is averaging 504 deaths a day and its total now tops 37,000 second only to New York.

About 23,000 people are now testing positive for the virus per day, down more than 7,000 from a week ago, with a test positivity rate that has fallen steadily to eight percent from a high of nearly 20 percent at the height of the surge.

New York Gov Andrew Cuomo announced ke was lifting restriction on the state’s 26 micro clusters’ due to declines in case and hospitalization rates, and a transmission rate falling below one 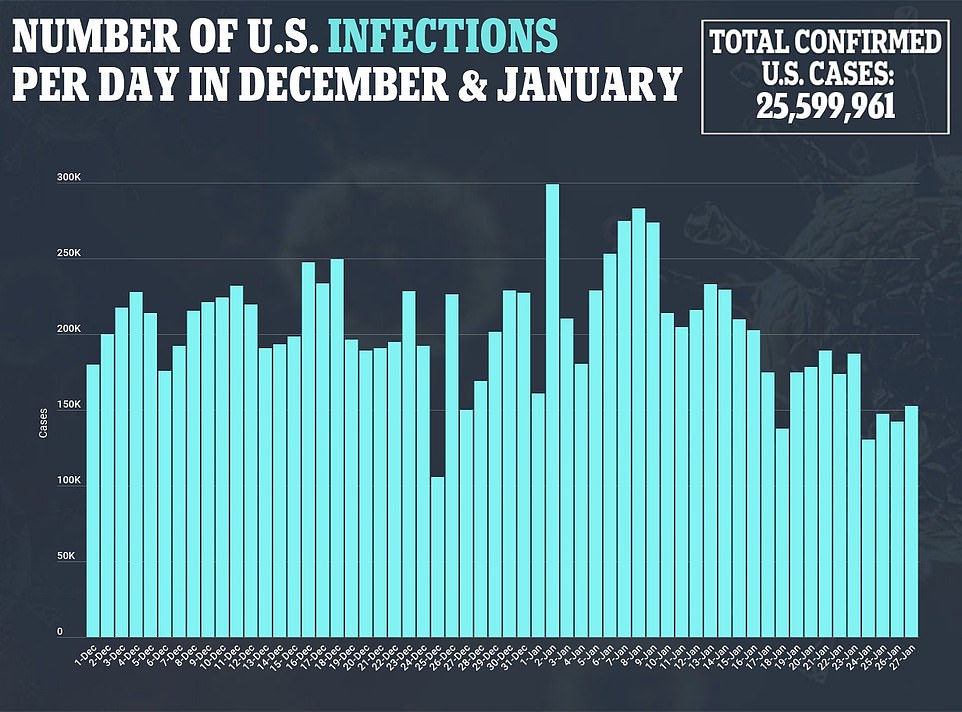 Meanwhile, in New York, Gov Andrew Cuomo announced on Wednesday he was lifting restriction on the state’s 26 so-called  ‘micro clusters’ due to declines in case and hospitalization rates.

This means several businesses in these areas, such as schools, shops, restaurants and houses of worship, will able to operate at a larger capacity.

New York State’s rate of transmission, or Rt, meaning how many people a contagious person will spread the virus to, had dropped below one.

‘We’re talking about livelihoods and the economy and billions of dollars,’ Cuomo told reporters at a news conference.

However, Cuomo said he is not ready to lift New York City’s ban on indoor dining, which went into effect in mid-December, despite the fact that that the COVID positivity rate in the city is now below six percent.

‘I fully understand how difficult it is that they’re closed, not just for the restaurants but all the people who are employed there. On the flip side is how fast this virus can take off,’ Cuomo said.

‘But we’ll have a plan by the end of the week.’

Cuomo may soon be facing the wrath of the state’s Attorney General Letitia James, whose office released a report on Wednesday, finding that the New York State Department of Health may have undercounted nursing home deaths by as much as 50 percent.

Hospitalizations are on the downward in Connecticut, but the state has struggled to lower case rates with 2,440 new infections reported on Wednesday

In Rhode Island, 613 new cases were reported on Wednesday, marking a 4.8% increase over the last seven days, even as hospitalizations decline

However, not all states are on the downward.

In Connecticut, hospitalizations are on the decline but cases and deaths have been increasing.

There are currently 1,016 patients hospitalized with the virus, and the state appears to be on track to be below coronavirus hospitalizations for the first time since November 24.

Meanwhile, there were 2,440 new cases reported on Wednesday, marking a more than 618 percent increase over the last seven days. This ma be skewed by the fact that cases are not reported over the weekend.

What’s more, the state is now reporting eight total individuals in the state with the UK variant, one of the highest totals across the country.

‘This new strain, which is considered to be more easily transmitted, is spreading quickly throughout the world, and it’s highly likely that these are not the only eight cases in Connecticut,’ Gov Ned Lamont stated.

‘That is why it is so important that everyone continues taking precautions to prevent transmission of this disease.’

‘The health of Connecticut residents remains our top priority, and our public health officials will continue to closely monitor these cases and any other developments with this contagious virus.’

In Rhode Island, another state trending upward, 613 new cases were reported on Wednesday, marking a 4.8 percent increase over the last seven days.

The state is currently trying to lower its daily infection rate, which sits around 98.6 per 100,000. according to Covid Act Now, a consortium of scientists and researchers from Harvard, Stanford and Georgetown Universities.

That’s one of the highest in the U.S.

Deaths are also around the highest they’ve been since early December,

However, like Connecticut, coronavirus-related hospitalizations are decreasing, dropping below 350 for the first time since late November. 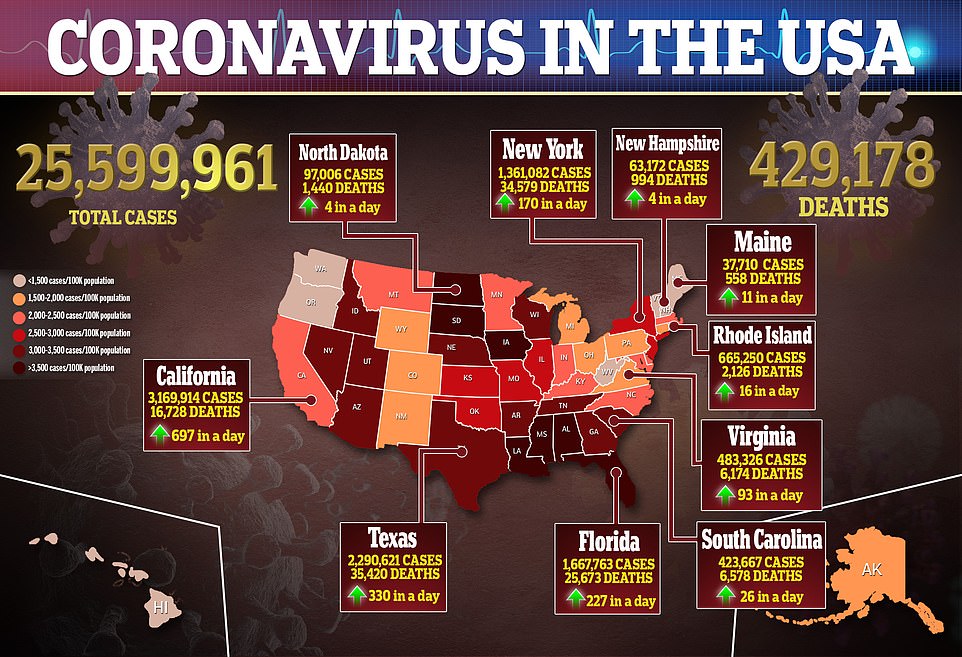 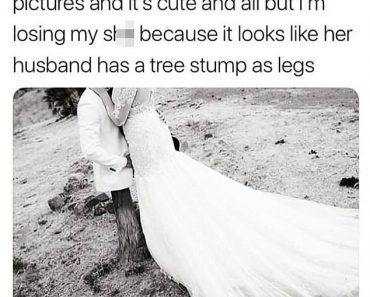 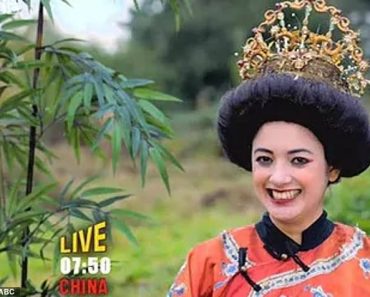 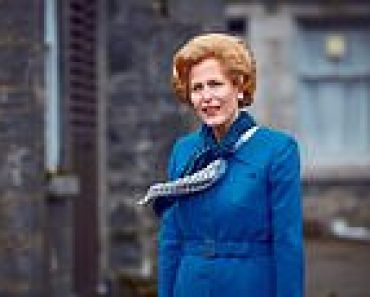 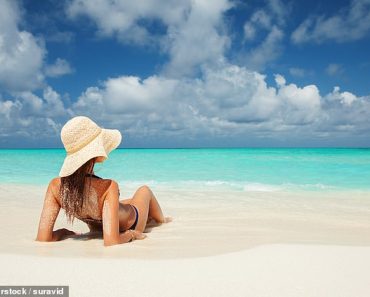 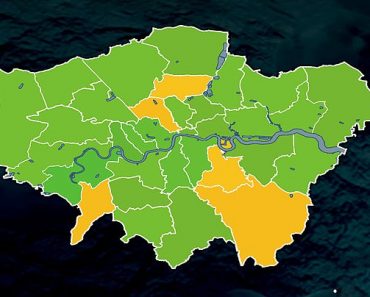