Elizabeth Olsen, 31, shares she worried about committing to play a Marvel character in so many projects because she wants to get PREGNANT

By Heidi Parker For Dailymail.com

Elizabeth Olsen was worried how signing up as a Marvel character would impact her family plans.

The 31-year-old actress can currently be seen alongside Paul Bettany as Wanda Maximoff/Scarlet Witch in spin-off series WandaVision, but she admitted she had concerns about committing to the character – who she has previously played in five movies – for so long would work for her family life.

What to do? Elizabeth Olsen was worried how signing up as a Marvel character would impact her family plans. The 31-year-old actress can currently be seen alongside Paul Bettany as Wanda Maximoff/Scarlet Witch in spin-off series WandaVision, but she admitted she had concerns about committing to the character

Asked by OK! magazine how committing to Marvel affects her life decisions, she said: ‘Babies? That’s so funny… That was part of the Marvel pitch.

‘Kevin Feige pitched the new show to me and he told me about Doctor Strange 2 – and then I said, ‘So when should I think about conceiving a child, if I want to?’

‘He said to me, “I’ll tell you the same thing I told Zoe [Saldana] and Scarlett [Johansson], ‘You like your life and we’ll work around you.'” 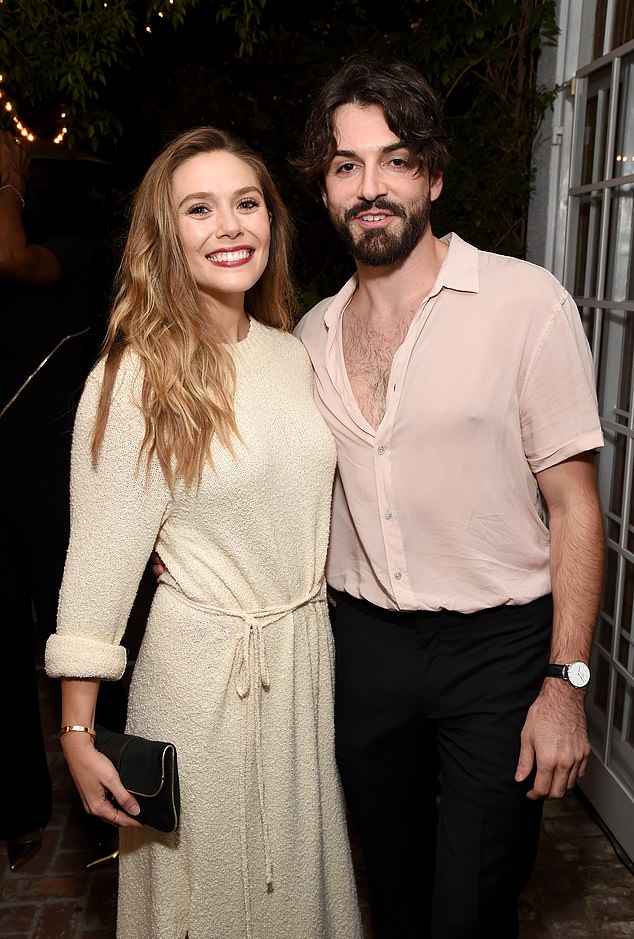 Her husband to be: Olsen (L) and Robbie Arnett attend the 2017 Gersh Emmy Party in LA

‘That’s honestly the best answer any boss could say.’

The Scarlet Witch (Wanda Maximoff) appears in Marvel Comics. She appears in the films Captain America: The Winter Soldier (2014), Avengers: Age of Ultron (2015), Captain America: Civil War (2016), Avengers: Infinity War (2018), Avengers: Endgame (2019) and the forthcoming Doctor Strange in the Multiverse of Madness (2022), and is a lead character in the Disney+ series WandaVision (2021).

Elizabeth – who is engaged to musician Robbie Arnett – loves working with Paul on the show, particularly because they’ve had so long to develop ‘trust’ as co-stars.

She said: ‘I love it. We’ve always enjoyed working with each other. 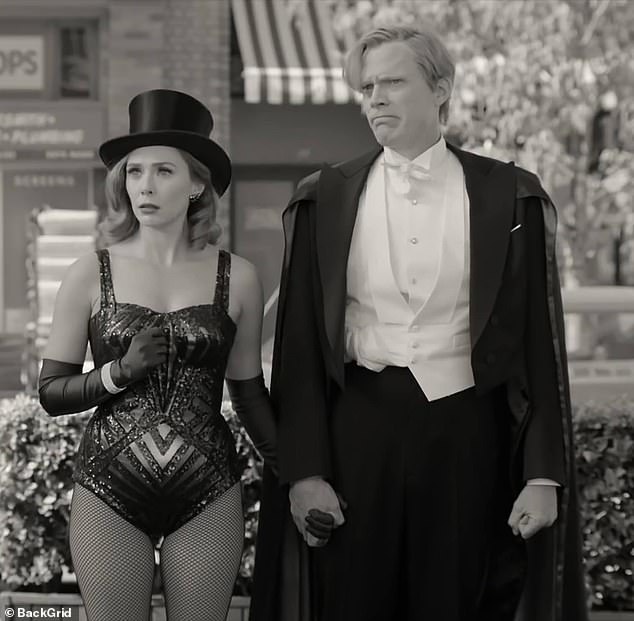 The hit show: (L -R): Olsen as Wanda Maximoff and Paul Bettany as VIsion in WandaVision 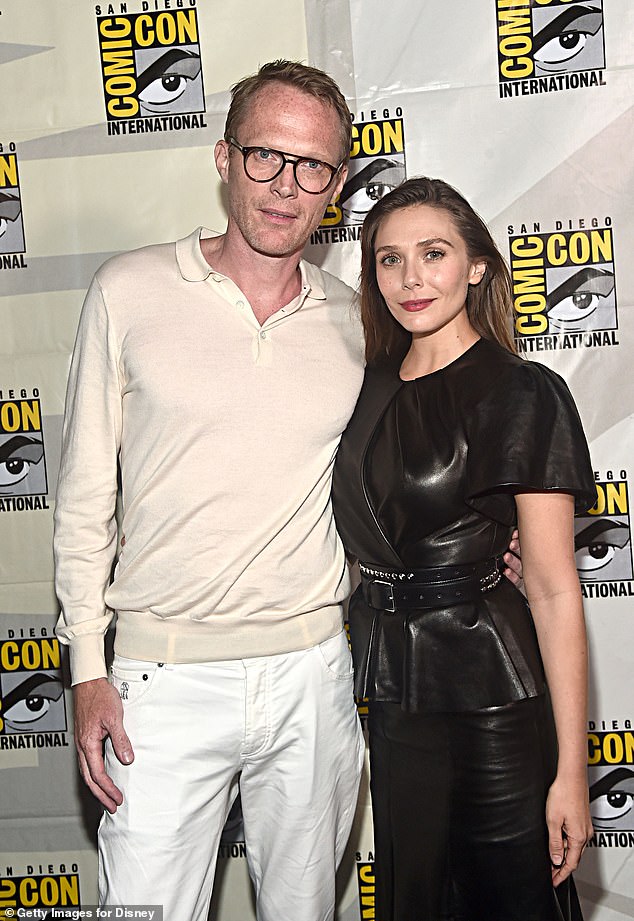 ‘In Marvel movies, you feel stupid most of the time because people are dressed in onesies and they have dots on their faces – or they’re wearing helmets with cameras because they’re eventually going to look like a scary monster.

‘For me, I’m standing there pretending to shoot things out of my hands while saving the world, so you feel very silly and that’s something Paul and I have become used to.

‘We’ve been put in various positions where we have to forget about how stupid we both look, so we’ve created this sense of trust.

‘Our journey in the story is usually an emotional, grounded, sincere part of the movies while everyone else is being funny or scary so it’s been fun for us in this show to be all of the different elements of the story. 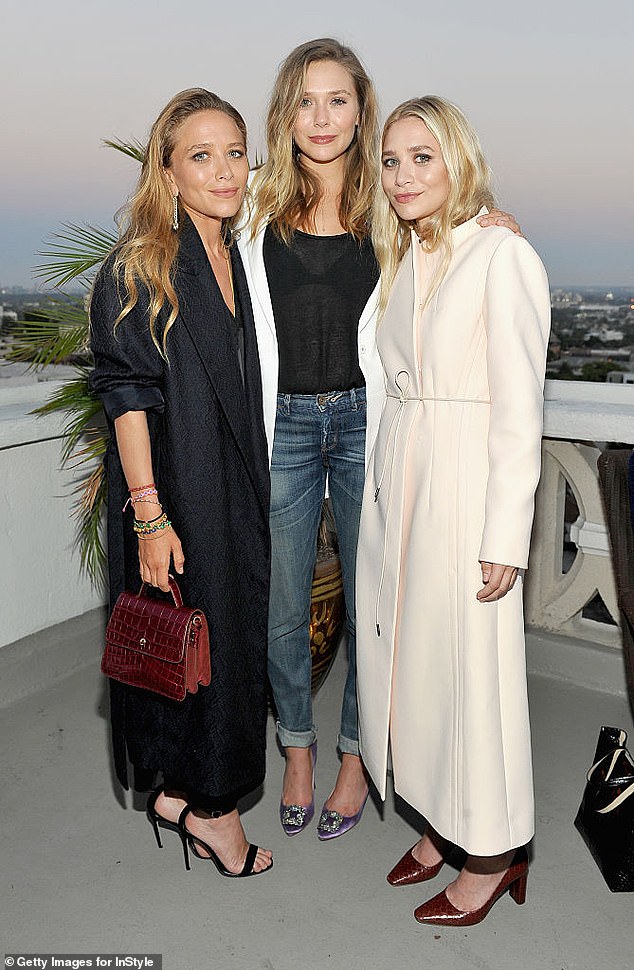 Successful family: Elizabeth with her twin sisters Mary-Kate and Ashley in 2016 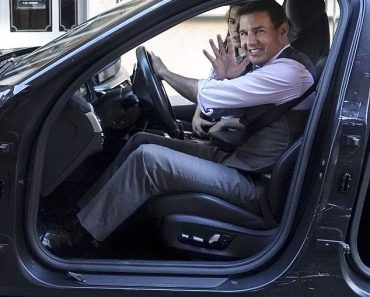 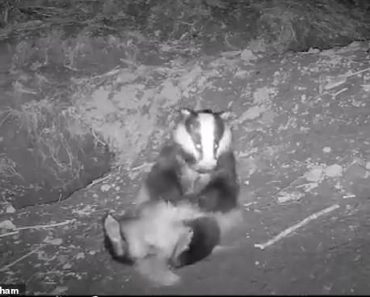 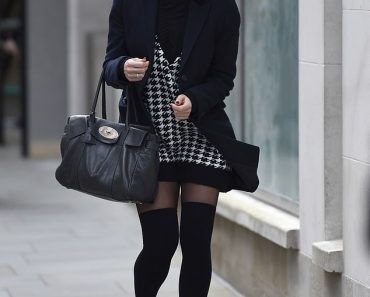 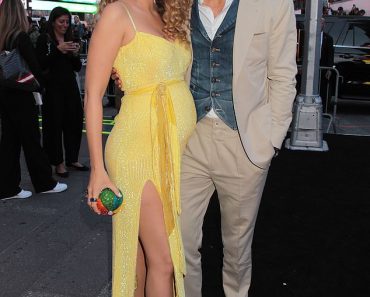 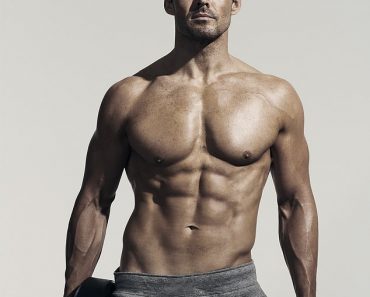