A man who has given up all technology and lives off grid in the wood has revealed he made the decision to have a vasectomy when he was 30 after growing despondent about the planet’s future.

Mark Boyle, 40, who stars in tonight’s Ben Fogle: New Lives in the Wild on Channel 5 at 9pm, decided to live off grid in 2008 and left his job at a sustainable health food shop in Bristol.

Mark, who grew up as an orphan in Ireland, lived completely without money for three years, which inspired him to write the book, The Moneyless Man, which became a best-seller.

With the proceeds of the book, Mark bought a plot of land in the West of Ireland, an hour’s-drive away from Galway, where he built a cabin and a hostel where he lets travellers live rent-free, in keeping with his moneyless philosophy.

Living off the land without any electricity of technology, Mark says he’s learned to be more appreciative of nature thanks to his unusual lifestyle.

After growing disillusioned with consumerism, Mark had a vasectomy aged 30, explaining to Ben he felt the world is ‘not a place he wanted to bring up kids in.’

But the off-grid man admits he sometimes feels lonely, and angry at the ‘big bad world,’ which has cost him several romantic relationships.

Ben Fogle meets Mark Boyle, 40, in this weeks New Lives in the Wild. Mark, who’s lived for three years without any money, wrote about his experience in the successful book The Moneyless Man and now lives off-grid in the west of Ireland, in a cabin he built himself, which has no electricity

‘I’ve lost girlfriends in the past because of the city, it makes me feel angry at the big bad world that just keep winning,’ he adds.

He then explains that one of the reason women keep leaving him is because they want children, something he can’t give them, after having undergone a vasectomy aged 30.

‘I had a vasectomy ten years ago against all kind of advice,’ he says. 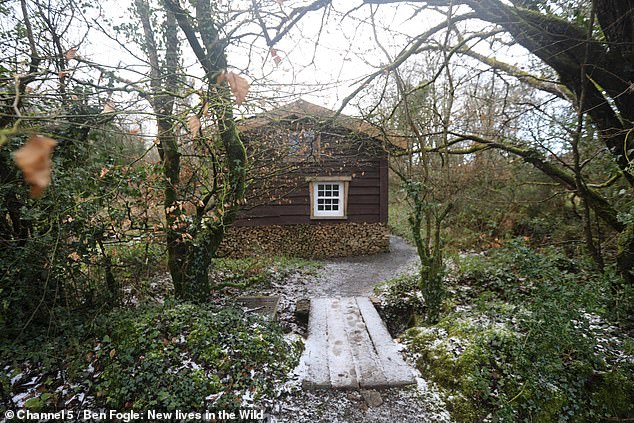 Mark lives in the cabin, pictured, He’s created a hostel nearby which he rents for free to people who want to escape consumerism

When Ben asks Mark why he had the procedure, the off-grid author cites his fears about the fate of the world.

‘There’s gonna 10 billion people very soon, the world’s kind of an artificial intelligence world. I didn’t really see this as a place I wanted to bring up kids in,’ he explains.

He reveals that one of his girlfriends split up with him solely because she wanted kids, which left him heartbroken.

But in spite of the heartbreak, Mark is adamant people need to ‘ keep loving as much as you can in life.’

At the time the episode was filmed, he was actually dating a woman who interviewed him for her thesis and is considering making the leap to a technology-free life like Mark. 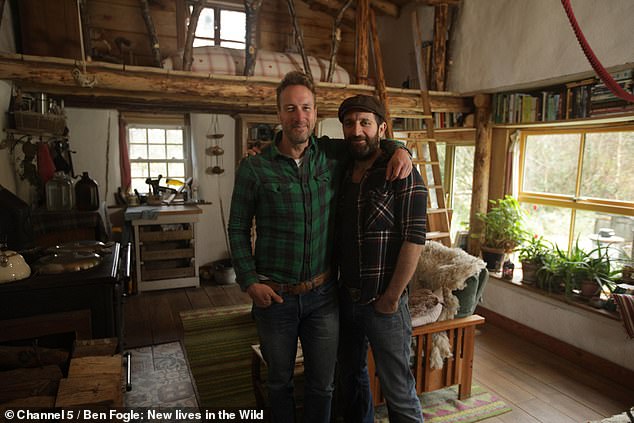 Ben is shocked by the fact that Mark made the drastic decision to have a vasectomy aged 30 because he felt so sad about the fate of the world, he didn’t want to bring up his own children in it (pictured in Mark’s cabin)

The news that his host has had a vasectomy is a shock to Ben, who reflects on Mark’s brutal decision.

‘I don’t feel sorry for him. I feel a little sad for him,’ he says.

‘On the one hand he’s found a way of living his own little utopian way of life, but there’s obviously something missing.

‘And he’s obviously really really sad about the planet. I think that’s the bubbling undertone here as well,’ Ben adds.

‘So much so that he had a vasectomy, because he doesn’t want to bring children into this world because in 20 years it’s gonna be so wretched that he wouldn’t want to be introducing a child of his own to that.

‘He obviously likes relationships. But of his own admission, his feeling towards the planet come above all else, that’s quite a sacrifice to make.’

Mark welcomes Ben to his cabin and his hostel on the condition that he gives him his phone for the length of his stay.

Ben is immediately struck with the fact Mark has built his cabin himself, and lives without any electricity or running water, using candles for light and a wood stove for warmth. 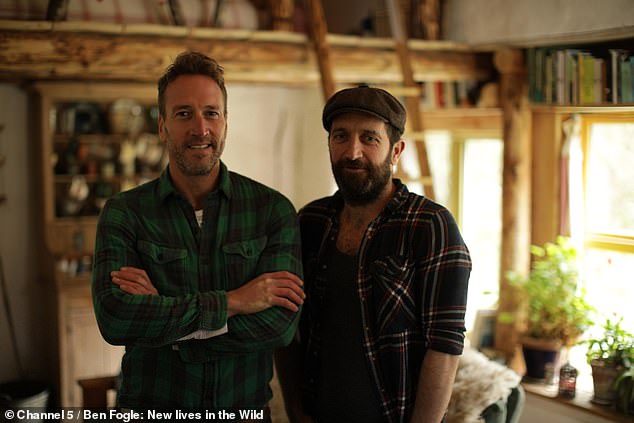 During his stay with Mark, Ben relinquishes his phone and writes handwritten letters to his family instead of emails

Mark has also built a free hostel called the Happy Pig where people who are looking to leave society behind for a while can stay without charge.

Ben visits in the winter, and there’s little to eat but fish and kale that Mark grows in his garden. But going without is part of Mark’s life philosophy.

‘This is what is traditionally known as a hungry gap, where there’s less food available,’ he tells Ben while the two sit down to eat some kale.

‘In the modern age, we don’t really experience that because we go to the supermarket, but when you live as I do, the hungry gap is a real thing.

‘It reminds us that food is not a given thing in life. When spring comes, you really appreciate your food,’ he adds. 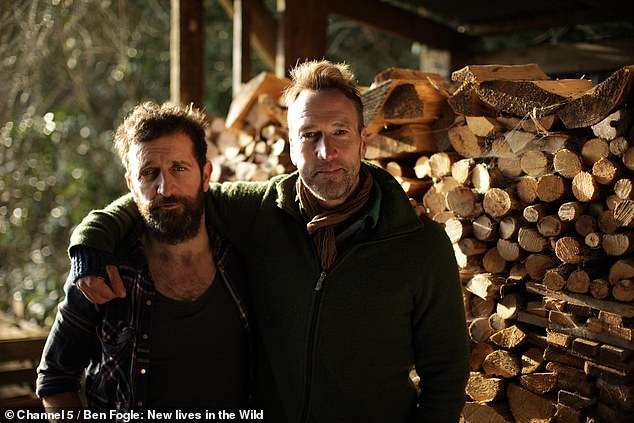 Before going off-grid, Mark graduated from university with an economics degree and worked for a health company in Bristol, but grew disillusioned with the consumerism he witnessed.

He quit his job after realising that the company he worked for used too much plastic in spite of calling itself sustainable.

He also used to be vegan, but realised his lifestyle was not sustainable because everything came wrapped in plastic. Now that he lives off his land, he fishes and eats his catch.

‘After a long process of inquiry, I came to the conclusion that at the root of many of our issues is a disconnection from what we consume, and that disconnection is heated by money,’ he tells Ben. 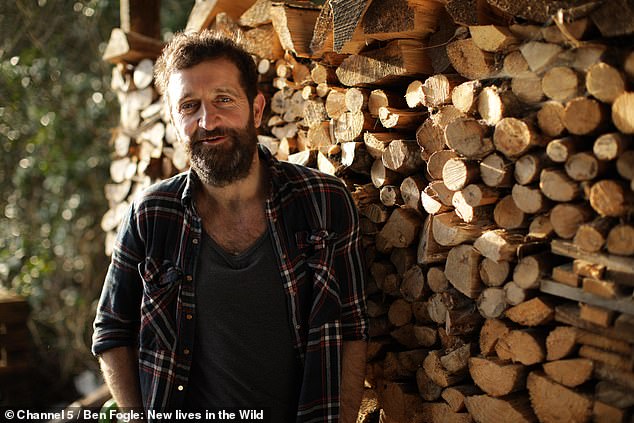 Mark is happy living off grid and off the land, but admits it can get lonely and that he has lost girlfriends to city life

‘At that point I decided to give up money. I’d been kinda ranting and raving about money and its consequences for a while at that time. A friend of mine told me “Well if you think that about it, why don’t you just give it up”,’ he adds, explaining this is what motivated him to live without any money for a year.

‘After the first year, I realised that the last thing in the world I wanted to do was go back to using money. So I did it for three years.

He wrote a book about his experience, which sold quite well and decided to buy his land with the proceeds, and to create the hostel so that other people who wanted to live without money could stay there rent free.

At the time Ben visits, Mark is loosely aware of the news of the outside world. For instance, he knows that Meghan Markle and Prince Harry are a couple, but he doesn’t know they have decided to step down as royals.

But being glued to a screen is something Mark doesn’t miss, saying he wanted to break free of screens and cultivate his connection with nature.

He doesn’t send emails and says he doesn’t miss it as a medium, but instead writes letter and completely wrote his second book by hand, going as far as making a handwritten copy of the manuscript for safe keeping.

‘He wants me to be present for the whole time and I get that, because it’s what I would like in my life, but I haven’t found the way to achieve that,’ the presenter says.

During his time with Mark, Ben accompanies him to fetch water by a stream in a street nearby, goes fishing and writes handwritten letters to his family.

He also can see that in spite of living off grid, Mark cherishes human connection and is in good terms with his neighbours and won’t mind spending an evening at the local pub.

‘He has his values and his philosophy but he also enjoys it and finds a place to let his hair down and he will break from his ideas and philosophy,’ Ben remarks.

‘He’s an intellectual, he is a writer a philosopher but he is also an everyman.

‘If we all lived like Mark the world would be a better place,’ he adds.

Ben Fogle: A New Life in the Wild airs tonight at 9pm on Channel 5. 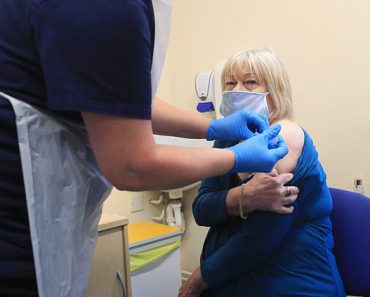 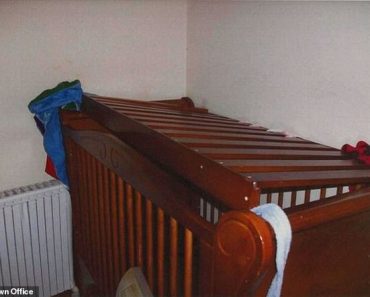 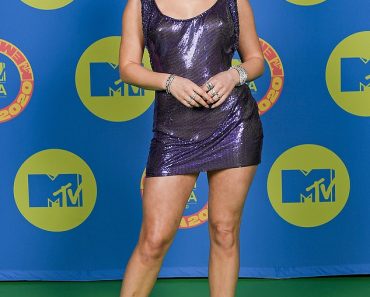 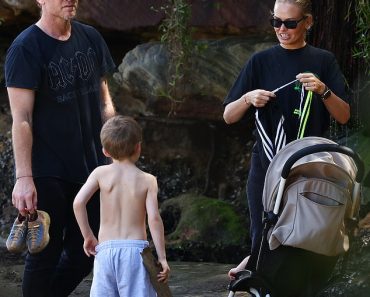