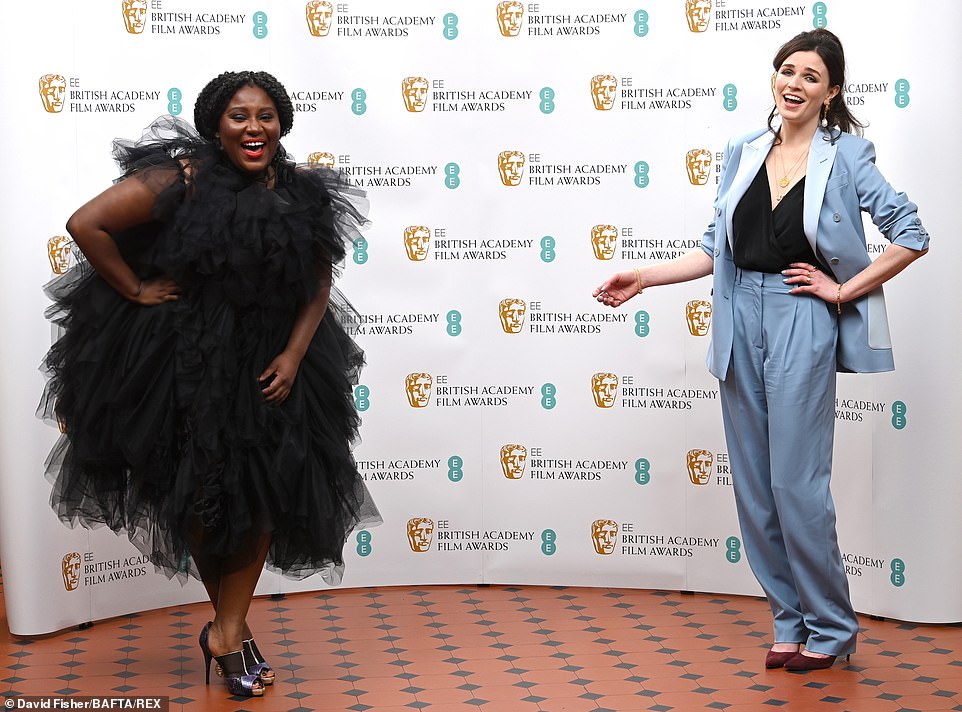 The BAFTA nominations were announced on Tuesday from London‘s Royal Albert Hall, with actresses Susan Wokoma and Aisling Bea serving as the presenters and BAFTA chair Krishnendu Majumdar opening the stream.

Prior to the reveal, the duo could not stop gushing over their respective talents before revealing the first category, as it was revealed the Outstanding British Film nominations are Calm With Horses, The Dig, The Father, His House, Limbo, The Maurtiatnia, Mogul Mowgli, Promising Young Woman, Rocks and Saint Maud.

With the nation remaining in lockdown amid the novel coronavirus pandemic, the announcement took place without a large audience in attendance.

Chewing Gum star Susan, 33, commanded attention in a dramatic black layered gown, which added a burst of glamour to the occasion. Standing tall in black open-toe heels, the London-born beauty added a flourish of colour with bold red lipstick, while her hair was styled in spiral curls.

Aisling also stepped out in style for the proceedings, donning a periwinkle blue tuxedo jacket and matching trousers. Teaming her tux with a deeply plunging black top and claret red heels, the Living With Yourself star accessorised with gold bracelets and statement pendants.

Presenters: The BAFTA nominations were announced on Tuesday from London’s Royal Albert Hall, with actresses (L-R) Susan Wokoma and Aisling Bea serving as the presenters 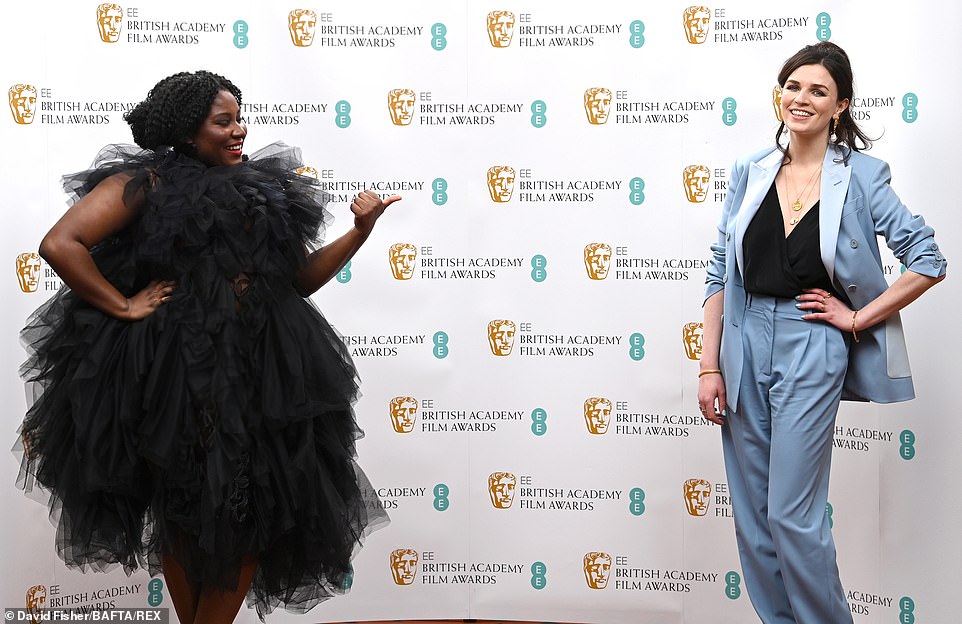 Pose: Despite the lack of crowd, the pair posed on a red carpet to keep the glamour factor high

Despite the stars being among very few making their way into the imposing venue, they playfully posed with a sign stating they should remain two metres apart.

Last year, the BAFTAs were the subject of much controversy, after it was revealed that all of the major category nominees were white.

Academy boss, Amanda Berry, admitted she was ‘very disappointed’ over the lack of diversity following nomination announcement, which saw not a single actor of colour honoured in the major acting categories.

BAFTA was criticised after the nominations were revealed, with movie fans taking to social media with the #BAFTAsSoWhite hashtag to call out Lupita Nyong’o’s snub for Us, while Margot Robbie was nominated twice in the Supporting Actress category.

Stepping out in style: Irish beauty Aisling stepped out in style for the proceedings, donning a periwinkle blue tuxedo jacket and matching trousers 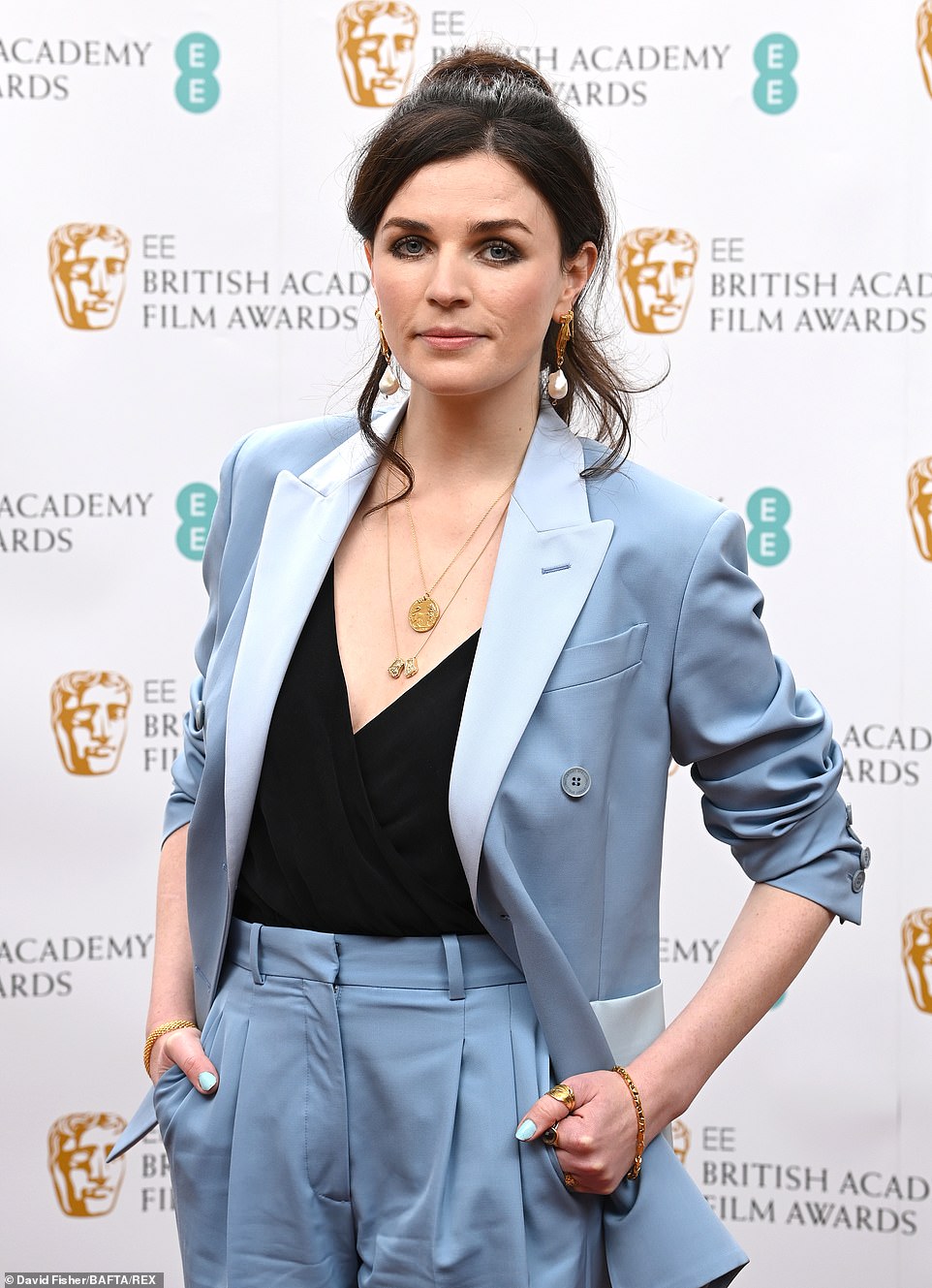 Speaking on Radio 4 at the time, Amanda Berry OBE admitted she was ‘very disappointed’ at the 73rd British Academy Film Awards shortlist’s lack of diversity.

When asked if the 2020 nominations were a ‘more diverse’ list, she said: ‘If I’m being totally honest, no, I’m very disappointed.

Agreeing the list seemed ‘very white’, she added: ‘I’m going to totally agree with you because that’s how I felt when I first saw the list and this isn’t being disrespectful to anyone who has been nominated because it’s an incredibly strong list this year.’

The 2020 shortlist also saw Jennifer Lopez, who is of Puerto Rican heritage, miss out on a nomination for her acclaimed role in Hustlers. British actress Cynthia Erivo, who received two Golden Globe nominations for Harriet, did not receive any nominations at the BAFTAs 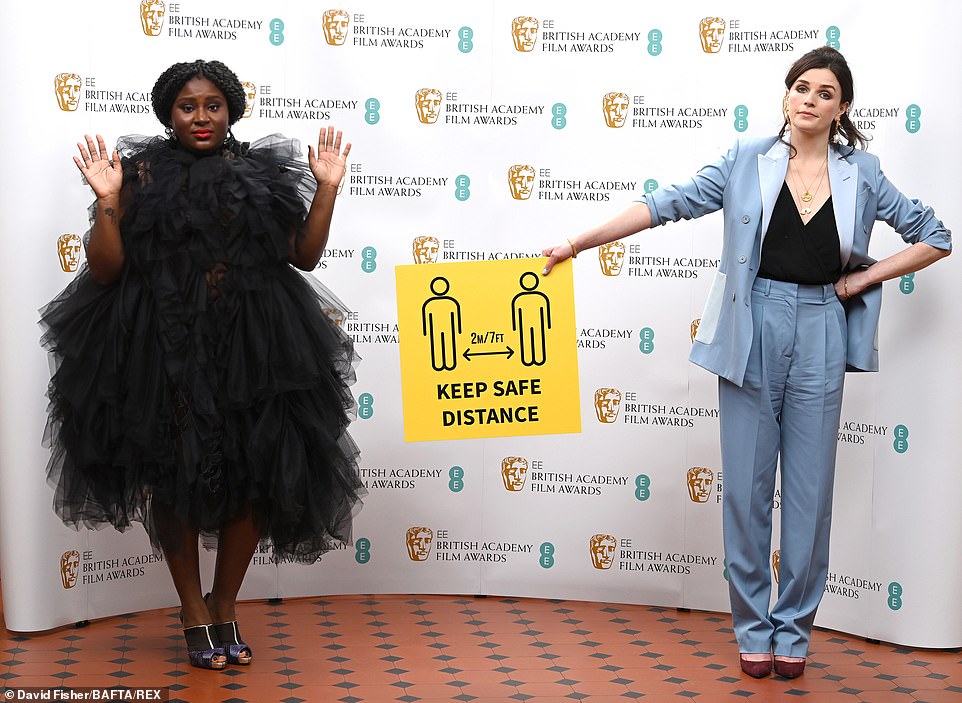 Social distancing: Despite the stars being among very few making their way into the imposing venue, they playfully posed with a sign stating they should remain two metres apart 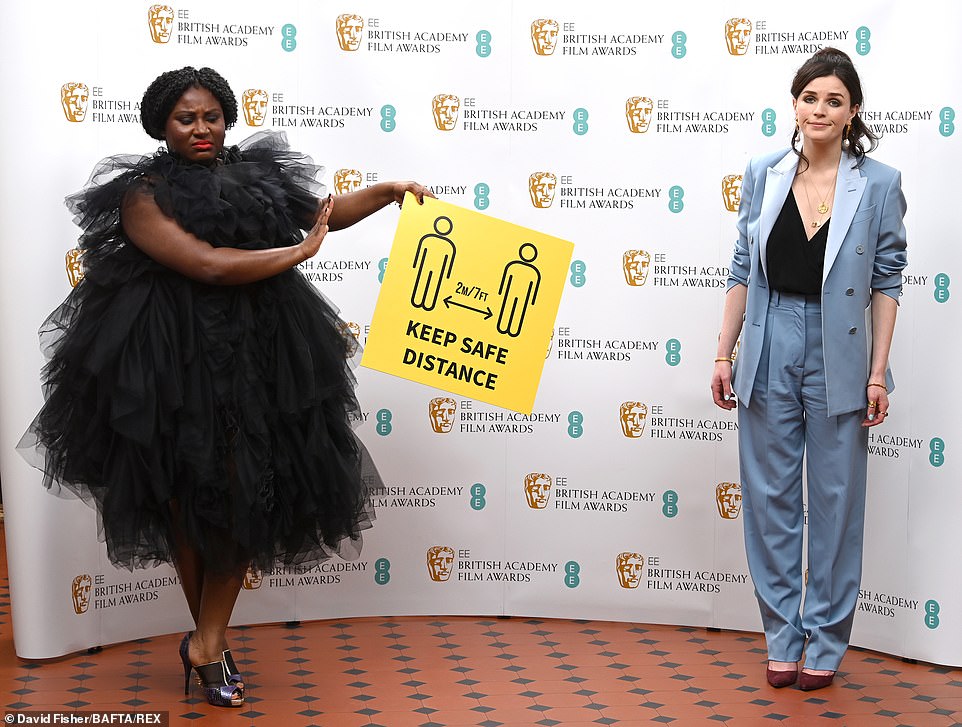 Playful: Susan playfully shunned her co-presenter Aisling as they posed for photographers

Awkwafina, who is of Chinese descent and picked up a Golden Globe for Best Actress on Sunday, fail to pick up a nomination for The Farewell. She was recognised in last year’s rising star category.

And after a seven-month review into the lack of diversity, BAFTA introduced more than 120 changes to its voting, membership and campaigning regulations.

Among the changes are the introduction of a new longlist round of voting, expanding the outstanding British film category to 10 nominations and widening all four acting and the best director fields to six nominees.

Film committee chair Marc Samuelson said of the changes: ‘One of the key issues raised time and time again… was that too much deserving work was not being seen.

‘The changes we are implementing are designed to ensure these films are seen and judged on merit alone.’ 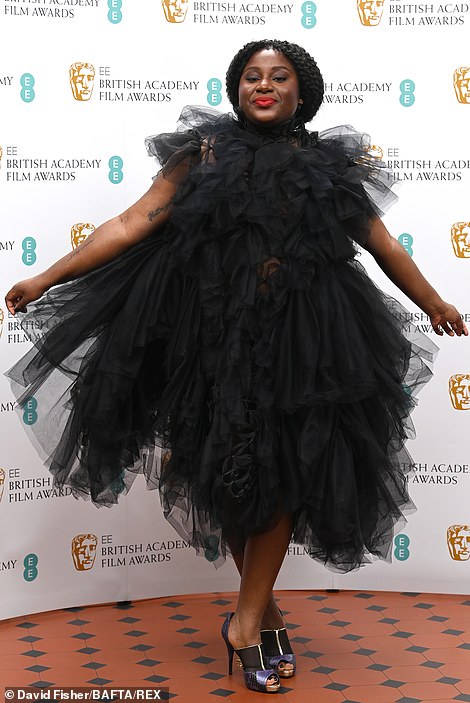 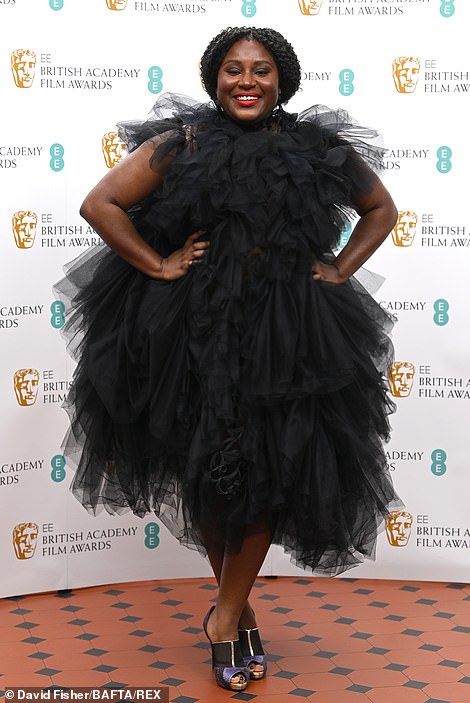 Commanding attention: Chewing Gum star Susan, 33, commanded attention in a dramatic black layered gown, which added a burst of glamour to the occasion 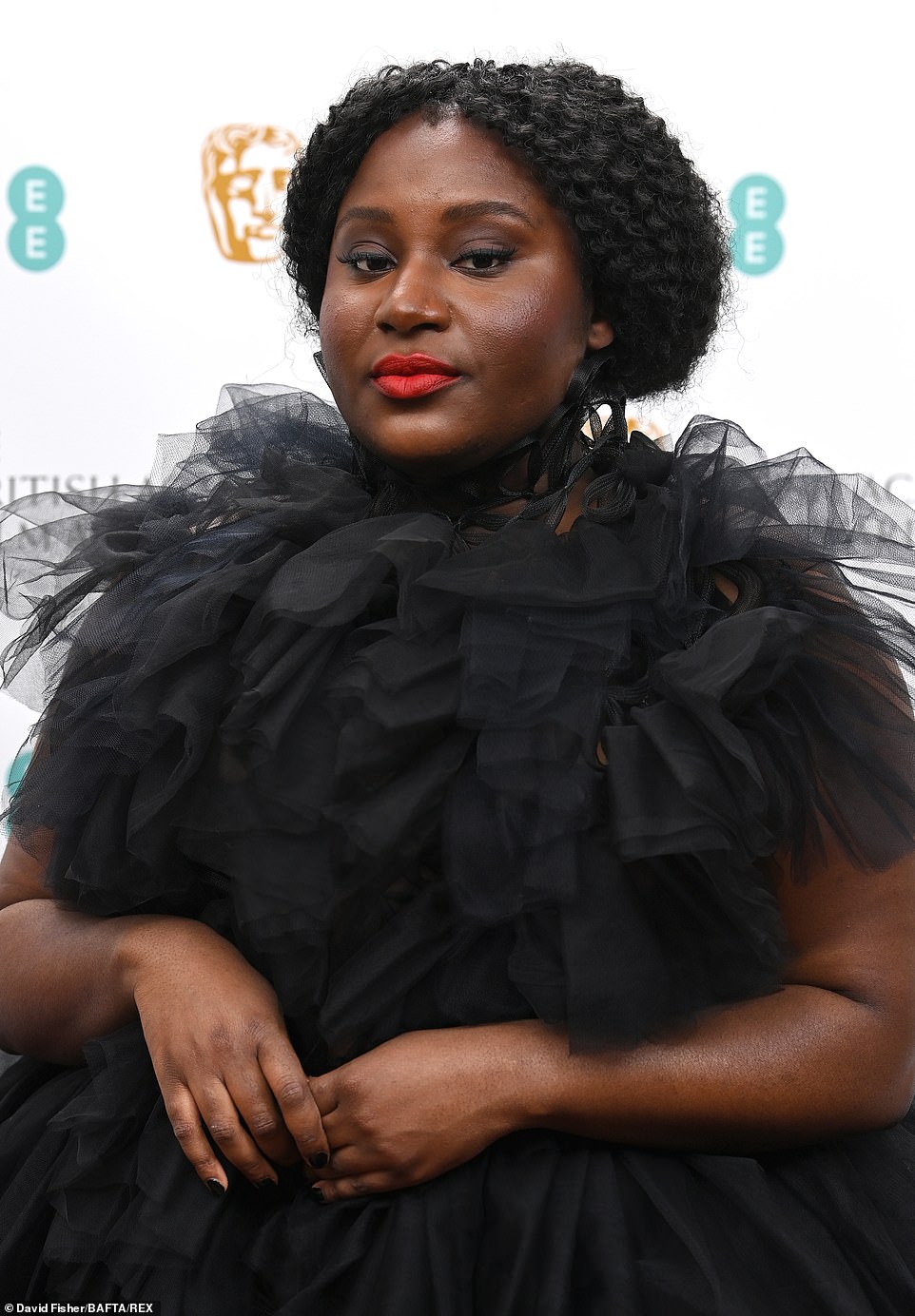 Making waves: The London-born beauty added a flourish of colour with bold red lipstick, while her hair was styled in spiral curls

This year’s BAFTA nominations come just under a week after the BAFTA 2021 EE Rising Star award were revealed, showing a marked increase in diversity.

Bukky, 16, was shortlisted for her incredible turn as Olushola ‘Rocks’ in Rocks, while Kingsley, 35, was nominated for his work in Regina King’s Golden Globe-nominated film One Night In Miami as Malcolm X.

Morfydd was shortlisted for her horror Saint Maud, while Ṣopẹ́ was named for his performance in the tense Netflix horror His House, and Conrad was nominated for independent film County Lines.

Speaking of his role in the drama, Kingsley gushed: ‘I look back now and I feel so lucky to have spent so much time with Regina and Malcolm. 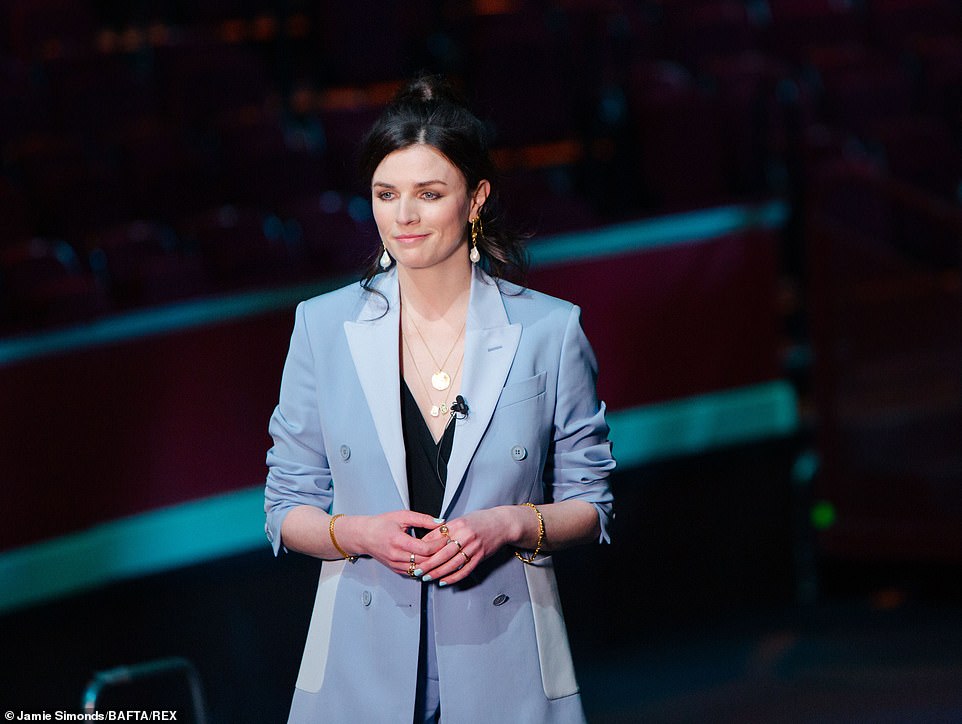 Rehearsals: The stars were seen rehearsing in the hours leading up to the announcement 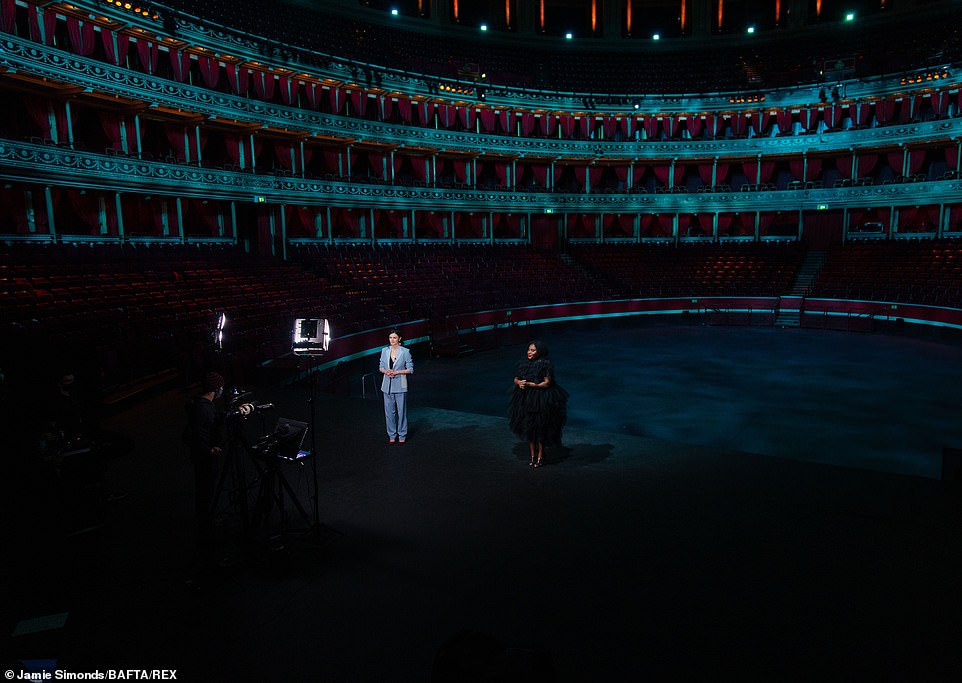 Empty: Because of lockdown rules, they were among very few inside the imposing building

‘I feel like Regina and I spoke about being very careful about all the decisions from the beginning and trying to create a Malcolm, so that if you went back to watch it again you would see the undercurrent that explodes at the end.

‘Regina is one of the most fascinating human beings who have ever lived so I feel very lucky to have had this experience.’

Speaking of her nomination, Bukky told the panel of getting the news: ‘I told my brothers, and when I told them they were just really shocked. They were all shocked.

‘When my agents told me I told them they were lying but I remember my brothers telling me “it’s your time champ.”‘

She added: ‘I honestly feel so blessed to be recognised so early on in my career. I still can’t believe this, I’m not sure I ever will either. All the warmth and love from BAFTA and EE is beautiful and I’m grateful. Thank you.’ 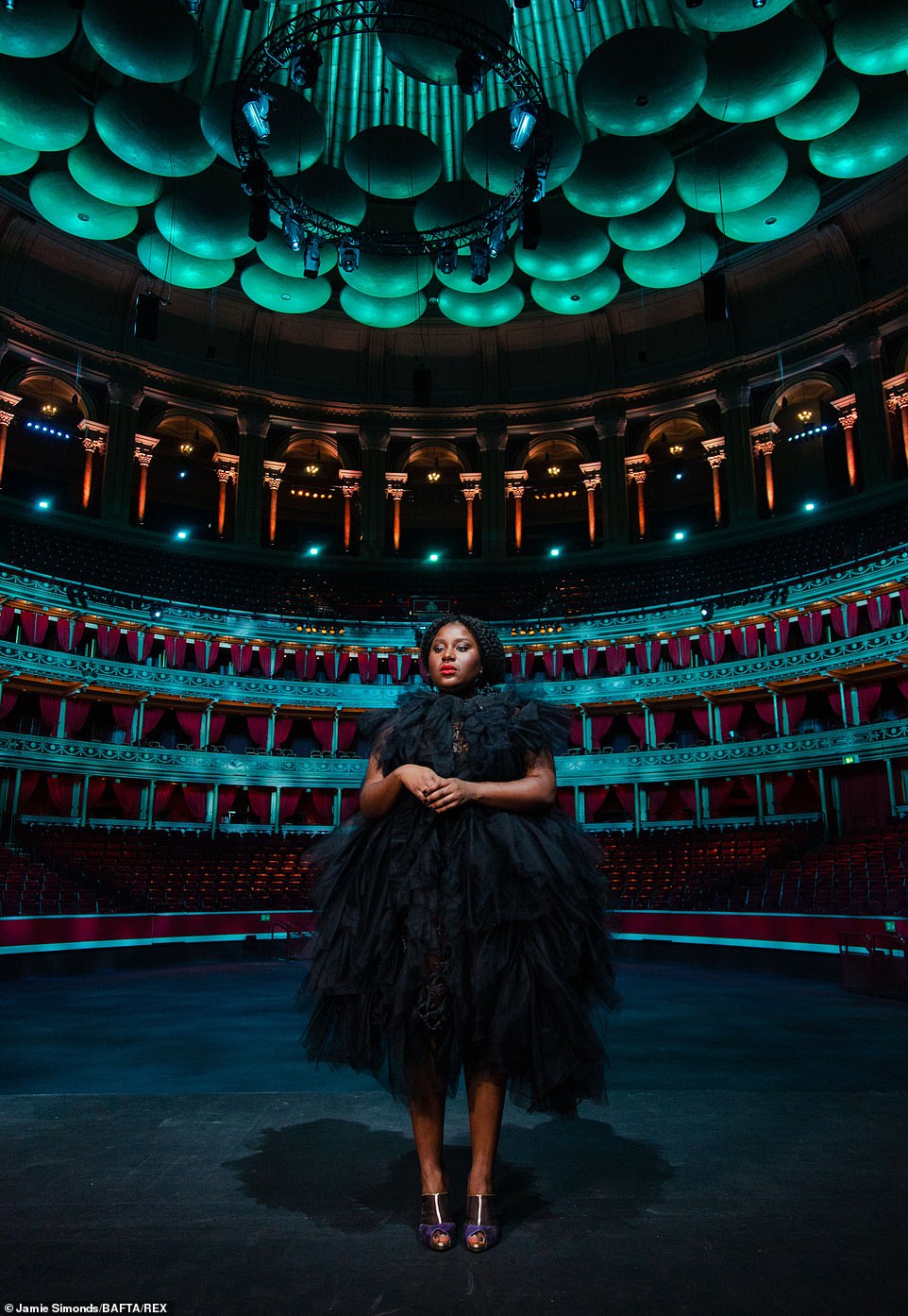 Sensational: Susan looked sensational as she took to the stage in her eye-catching ensemble 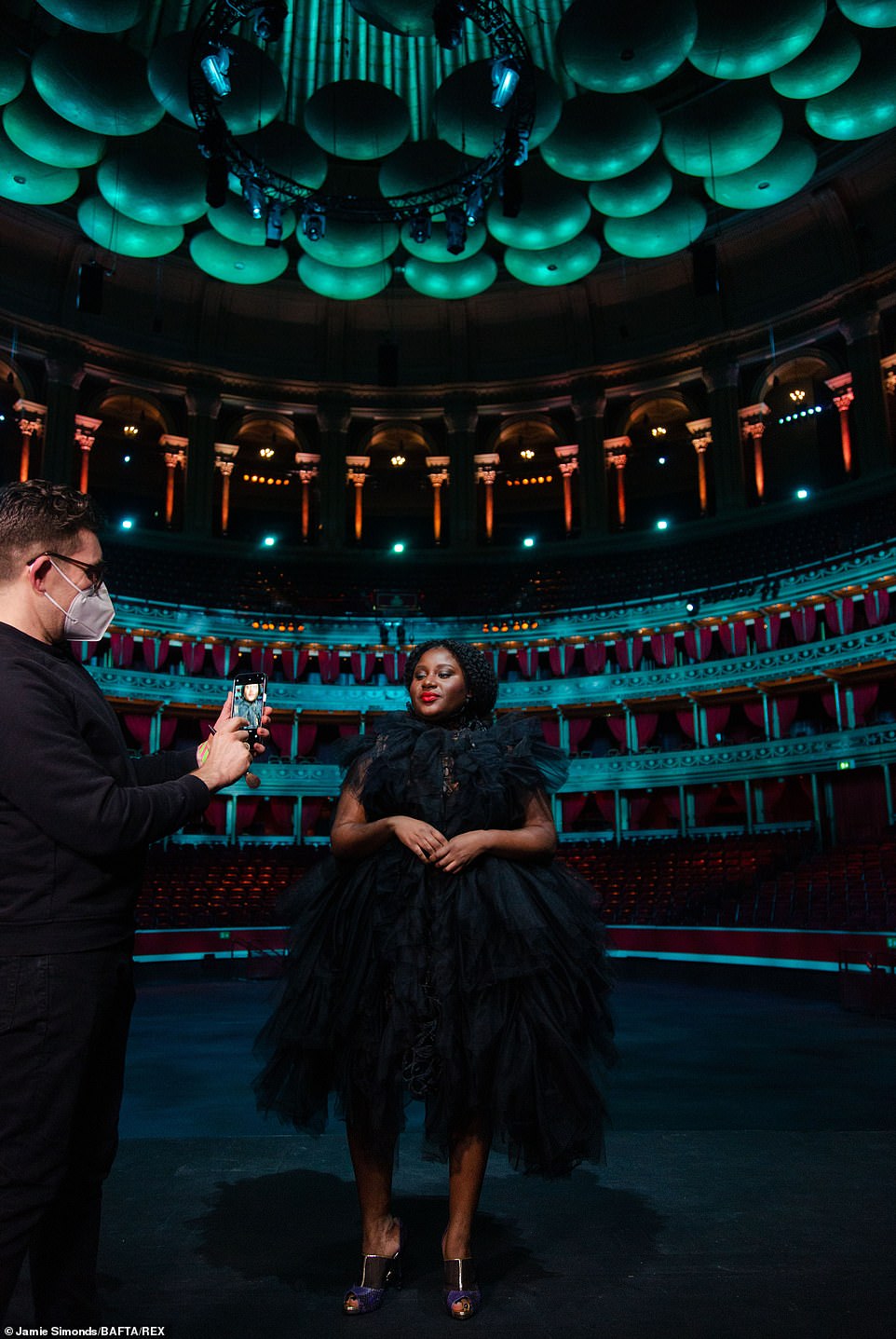 Picture perfect: A staffer was seen taking a snapshot of Susan as she stood in the grand setting

Rocks follows Bukky’s teenage character after she and her brother are abandoned by their single mother, and sees them try and learn to fend for themselves and avoid being taken away by authorities.

Morfydd plays hospice nurse Katie in the psychological horror, and in the film she renames herself Maud and becomes obsessed with saving the soul of a former dancer in her care.

Speaking about the role, she told the panel: ‘When I read the script I feel Rose Glass (the film’s director) wrote a character that felt complete, it was easy to step into it.’

When asked if it was difficult to play Maud, Morfydd, who was tuning in from New Zealand, added: ‘No, not really which I think freaks people out a bit.

‘She made a lot of sense to me and I think loneliness is a kind of fear that seems kind of non-neurotic. 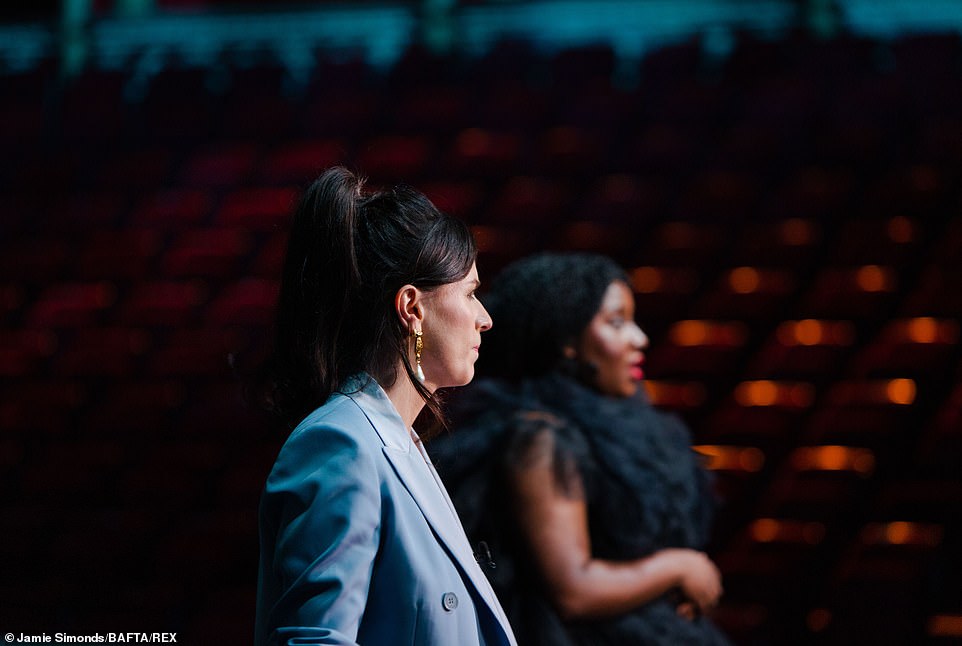 Diversity row: Last year, the BAFTAs were the subject of much controversy, after it was revealed that all of the major category nominees were white 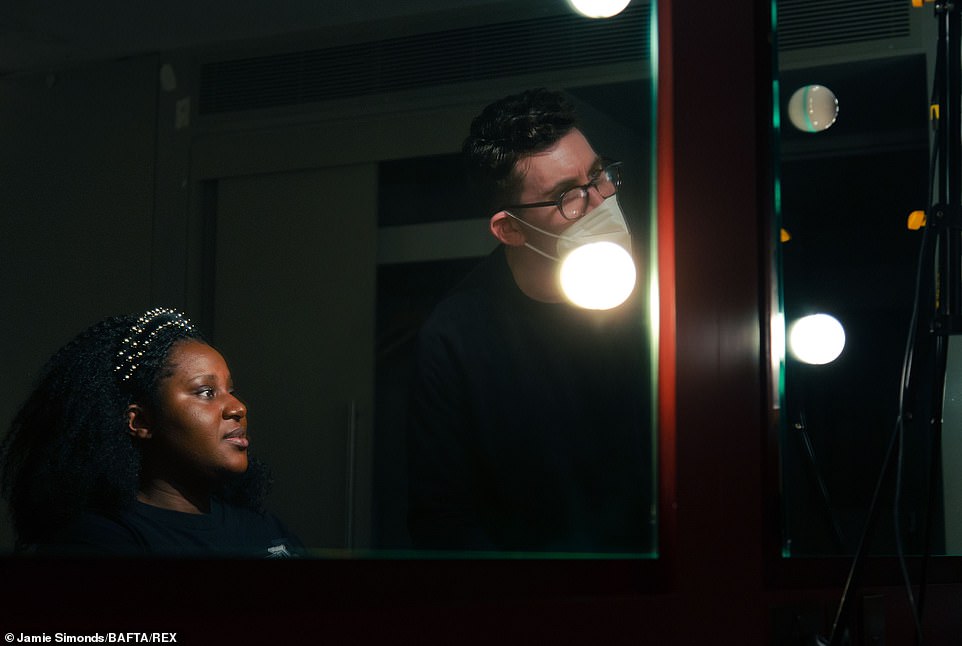 Changes: This year’s BAFTA nominations come just under a week after the BAFTA 2021 EE Rising Star award were revealed, showing a marked increase in diversity

‘It was a thing I’ve been thinking about for some time, and when I read the script it was something I wanted to write if I had any skill in writing, she made sense to me.’

Ṣopẹ́ said of being shortlisted for the prize: ‘The history of the EE Rising Star Award is full of such exceptional and inspirational talents and I’m so grateful to both EE and BAFTA for considering me amongst them.

‘I’m properly delighted for all my fellow nominees for being recognised in what can only be described as a difficult and challenging year for everyone across the world.’

He added: [I am] definitely proud that this thing we worked on really hard and so long was received so well by everybody, it was definitely a surprise.

‘I don’t think anyone had recognition or appreciation of what the product was going to be at the end of it, it was about telling the story to our best ability, trying not to get weighed down by the horror. 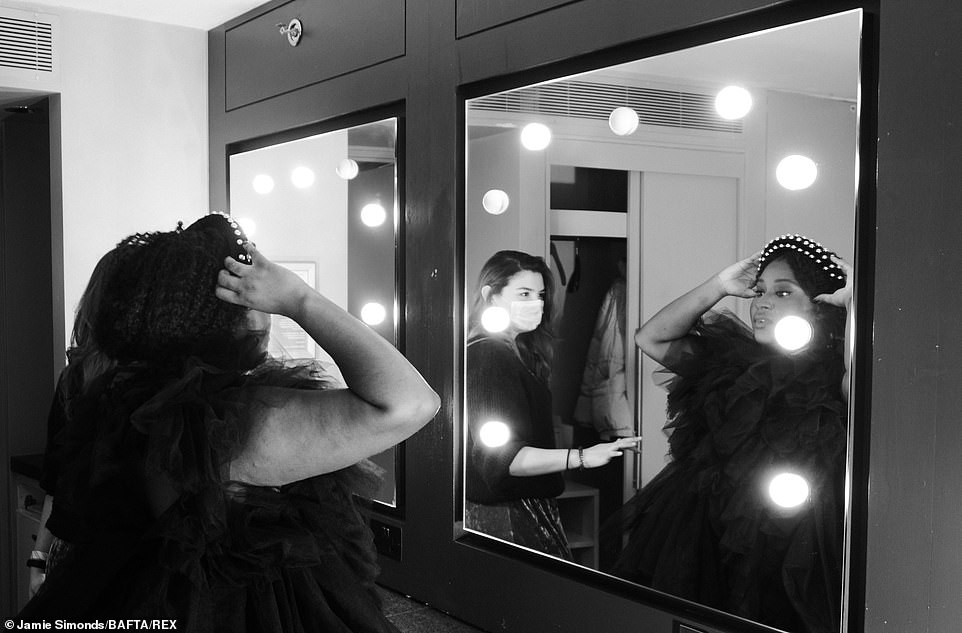 Getting glammed up: The presenters were seen glamming themselves up in the dressing rooms ahead of the nominations being announced 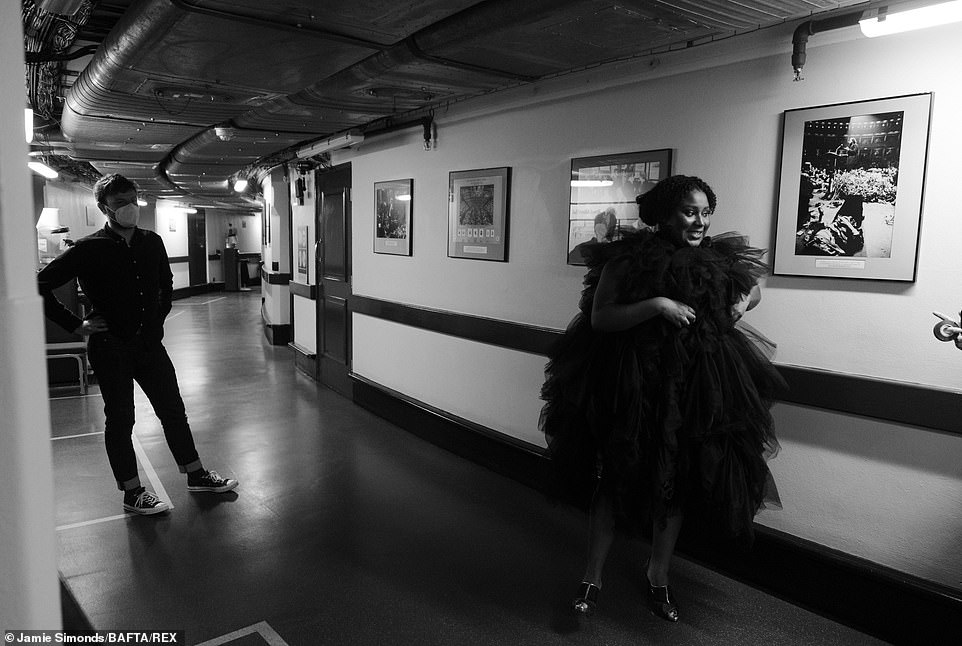 Walking on: Susan walked the halls of the grand venue as a photographer captured the action

‘For people to come out the other side and enjoy our horror film it was such a delightful bonus but not something we expected.’

Conrad, who was shortlisted after his impressive acting in County Lines, claimed he was ‘in a state of disbelief’ at being nominated.

He said the honour was ‘really humbling and it gives me a lot of energy and motivation on a daily basis. Really proud to be here.’

County Lines sees Conrad play Tyler, a 14-year-old boy who is groomed as part of a drug-selling enterprise that traffics children across the UK.

This is the 16th year the award has been given, with past winners including Daniel Kaluuya, Juno Temple, John Boyega, Tom Hardy, Jack O’Connell, Tom Holland and Kristen Stewart. 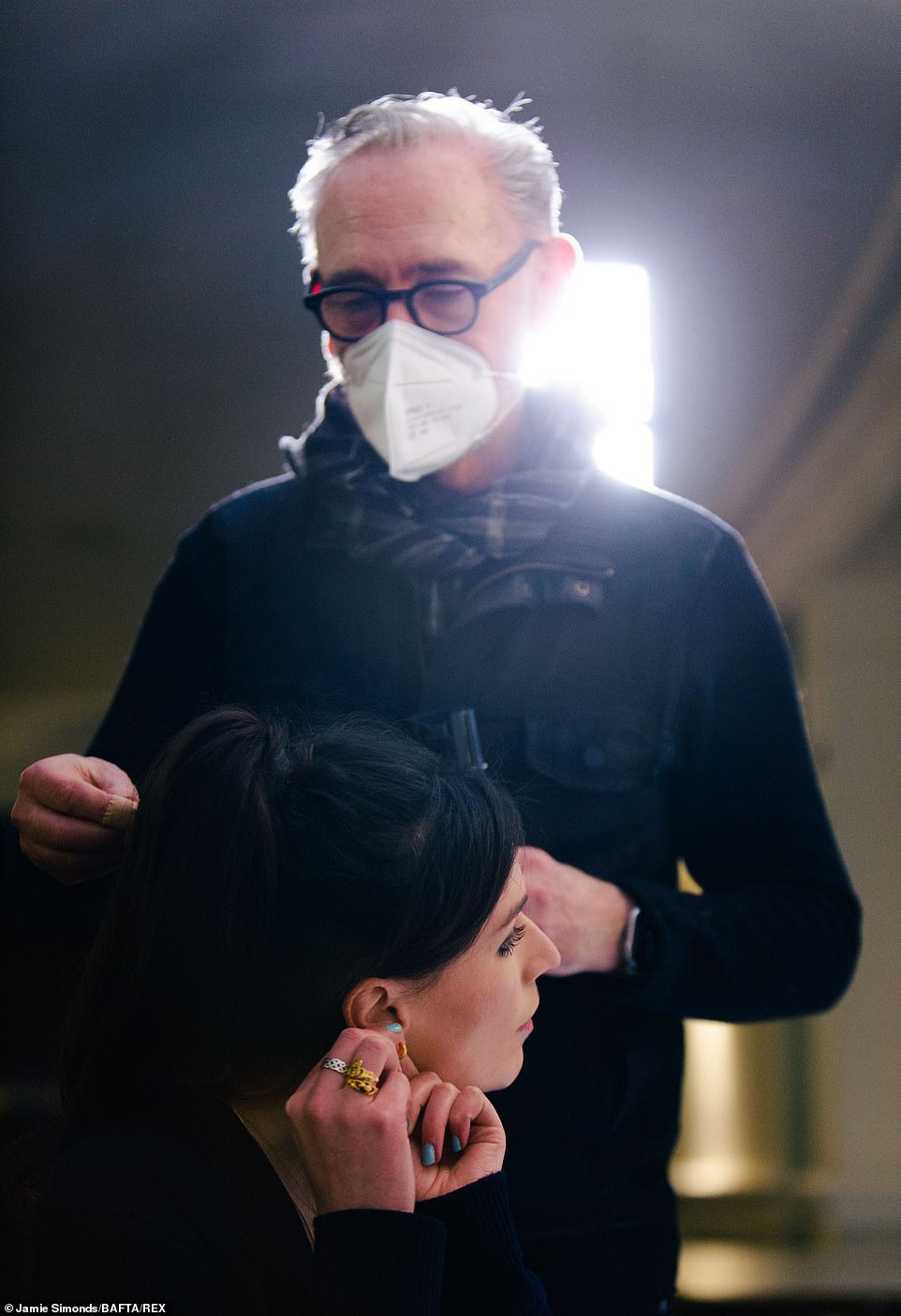 Style: Aisling put on her dazzling jewellery as a her raven locks were styled for the big moment

The award is the only 2021 EE BAFTA category to be voted for by the British public and voting is now open.

The EE Rising Star award was created in honour of the late Mary Selway. A highly respected and BAFTA award-winning casting director whose 36-year career saw her work on more than ninety filmsand work with leading directors such as Steven Spielberg and Clint Eastwood.

Mary’s work contributed to the creation of some of the silver screen’s most memorable characters and in 2001 she received BAFTA’s Outstanding British Contribution to Cinema Award.

The EE British Academy Film Awards will take place on April 11th 2021 without a live audience, and will air on BBC One. 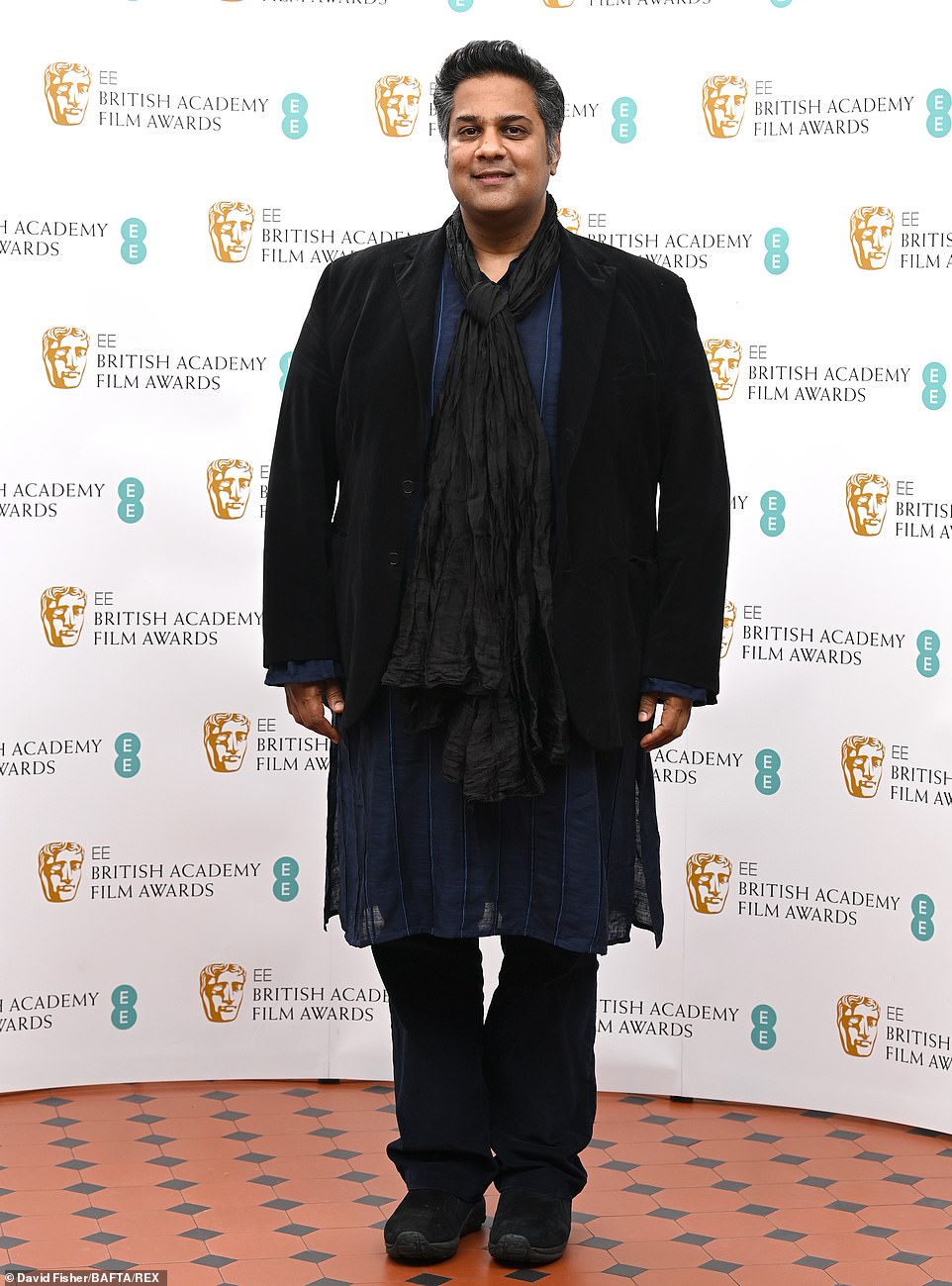 Also in attendance: BAFTA chair Krishnendu Majumdar was also on hand for the proceedings