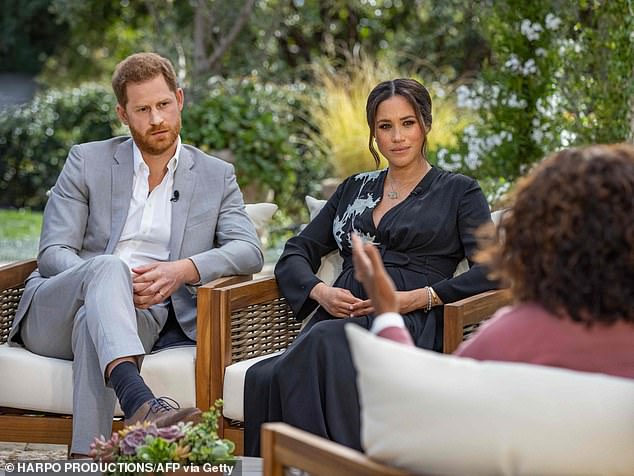 Meghan Markle experienced a ‘culture shock after her marriage’ and ‘no one could’ve helped her bridge that, except the Duchess of Windsor had she still been alive’, according to a royal expert.

The Duchess of Sussex, 39, used her two-hour tell-all with Oprah yesterday to reveal how she went into the Firm ‘naively’, claiming she ‘didn’t do any research’ into the Royal Family before she married into it and ‘didn’t fully understand what the job was’.

Nigel Cawthorne, author of I Know I Am Rude: Prince Philip on Prince Philip, told FEMAIL how the former US Suits actress ‘experienced a culture shock’ following her wedding to Prince Harry in 2018.

He suggested no one in the Royal Family could have helped, other than twice-married American socialite Simpson, who found herself at the centre of one of the most scandalous love affairs of the 20th century when she entered into a relationship with Prince Edward, Prince of Wales who went on to briefly become King Edward VIII before abdicating.

The Duchess of Sussex (pictured with Prince Harry), 39, used her two-hour tell-all with Oprah yesterday to reveal how she went into the Firm ‘naively’, claiming she ‘didn’t do any research’ into the Royal Family before she married into it and ‘didn’t fully understand what the job was’ 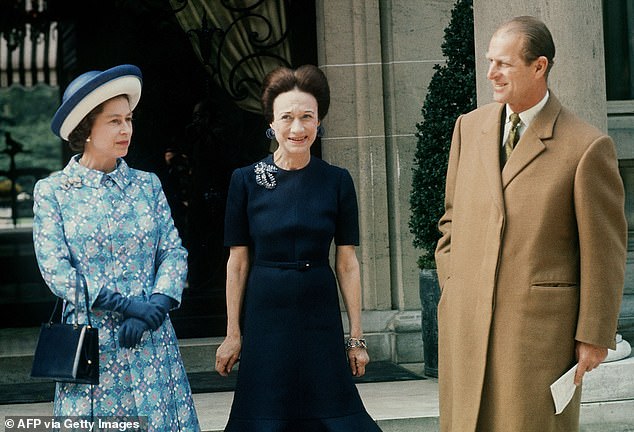 Nigel Cawthorne, author of I Know I Am Rude: Prince Philip on Prince Philip, told FEMAIL Meghan ‘experienced a culture shock’ following her wedding to Prince Harry in 2018. He suggested no one in the Royal Family could’ve helped, other than American socialite Wallis Simpson (pictured centre in 1972, with the Queen and Prince Philip)

The royal author said: ‘It sounds like Meghan experienced a culture shock after her marriage and in that sense she was both unprepared and naive about what was expected.

‘I am not sure that anyone might have been able to help her bridge that, except perhaps the Duchess of Windsor had she still been alive.’

Edward VIII renounced the throne in 1936 in order to marry Wallis, who was thought unfit to be Queen, having been married twice.

Following their wedding in 1937, she was formally known as the Duchess of Windsor, but was not allowed to share her husband’s title of ‘Royal Highness’.

Wallis Simpson and King Edward VIII: A scandal that rocked a nation

January 1931 – Wallis meets Prince Edward in January 1931, after being introduced via her friend Lady Furness

August 1934 – Wallis admits she and Edward are no longer just friends, after joining him on a cruise

January 1936 – King George V dies. Edward asks Wallis to watch the proclamation of his accession with him from St. James’s Palace

August 1936 – The pair enjoy a cruise around the Adriatic sea with friends. Details of their relationship appear in the American press

June 3, 1937 – The couple get married in the south of France. Wallis was formally known as the Duchess of Windsor, but was not allowed to share her husband’s title of ‘Royal Highness.’

Wallis received abusive and hostile hate mail and was even accused of being a Nazi sympathiser.

After she died on April 24, 1986, aged 89, the Royal Family allowed her to rest next to her late husband in the Windsor grounds.

Nigel went on to add that it was no surprise that the Duchess of Sussex found entering the Firm difficult, since even Prince Philip ‘found Buckingham Palace a hard nut to crack’ following his wife’s accession to the throne in 1952.

‘It is a small wonder that Meghan found it difficult. It is exceptionally hard for the spouses of royals to become an integral part of the family with its many protocols and unwritten rules,’ he explained.

‘If you do something right, no one is going to congratulate you or mention it. As a foreigner, Meghan must have found it baffling.

‘Prince Philip, too, who at least grew up in palaces, found Buckingham Palace a hard nut to crack.’

Continuing, the royal author said: ‘He said that he realised that because the institution has been there for almost a millennium you quickly find yourself stepping on people’s toes.

‘He had to fit in, not the other way around. But even the English can find the palace an inscrutable institution.

‘Harry’s mother Diana had a privileged English background as well as royal blood in her ancestry yet struggled to navigate the palace. Until someone writes the first Royal Etiquette for Dummies, every spouse will struggle.’

Meghan used her highly anticipated Oprah Winfrey tell-all to reveal she ‘didn’t do any research’ into the royal family before she married into it and said she ‘didn’t fully understand what the job was’.

The duchess said: ‘I went into it naively because I didn’t grow up knowing much about the royal family. I didn’t fully understand what the job was.’

Such was her naivety, that when Meghan went to meet the Queen for the first time at The Royal Lodge in Windsor, she ‘didn’t even know how to curtsy’ and was shocked when Harry explained it was expected of her.

The mother-to-be said that was the moment ‘the penny dropped’ that her perception about the Firm was ‘very different’ to the reality, and she had to learn how to perform the royal custom ‘very quickly’.

‘Right in front of the house we practised and ran in. Fergie ran out and said, “Do you know how to curtsy?”,’ she recalled. ‘Apparently I did a very deep curtsy, I don’t remember it, and then we sat there and we chatted.’ 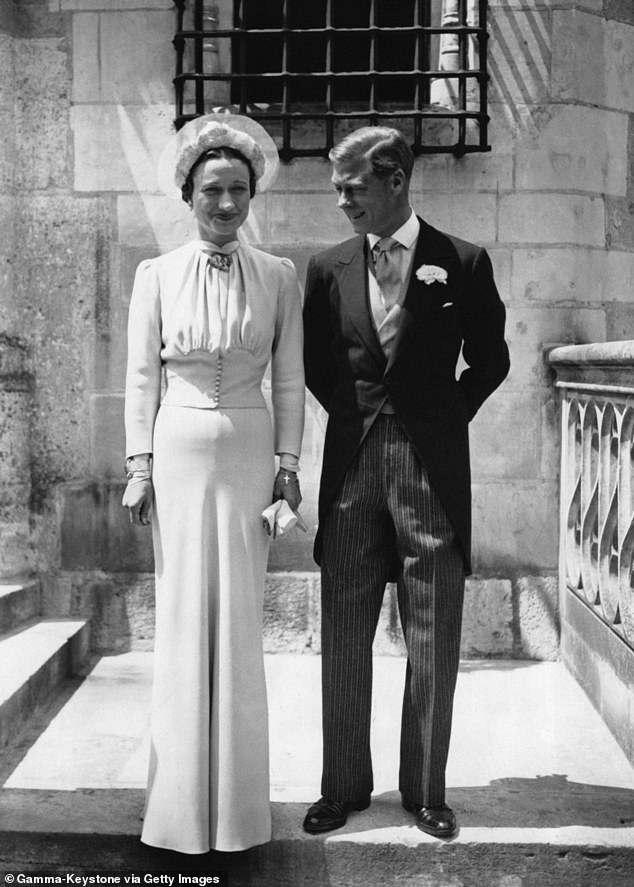 Wallis Simpson, the woman whom Prince Harry’s great-uncle King Edward VIII abdicated his throne for, pictured on her wedding day in 1937

‘I grew up in LA, I see celebrities all the time. it’s not the same. This is a completely different ball game,’ she added.

Meghan explained that she had been on her way to the Royal Lodge when Harry said they were to meet his grandmother, the Queen.

She recalled: ‘There wasn’t a huge formality the first time I met Her Majesty, the Queen. We were going to lunch at Royal Lodge which is where some members of the family live, Andrew, Fergie, and Eugenie and Beatrice, we spent a lot of time there.

‘And Eugenie and I had known each other before I’d known Harry, so that was comfortable and we were friends with them as a couple.

‘And then it turned out the Queen was finishing a church service there in Windsor and so she was going to be at the house, and I remember Harry and I were in the car and he says “OK my grandmother’s there, so you’re going to meet her”.’ 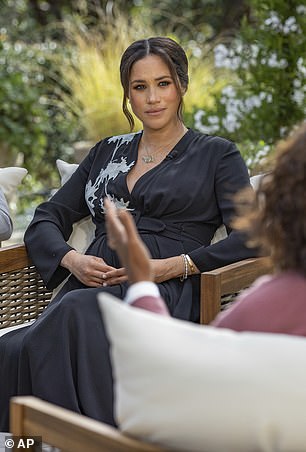 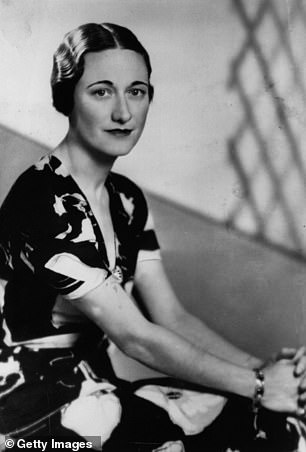 Meghan’s look (pictured left) for her tell-all was compared to Wallis’ style, with viewers noting that her outfit and centre-parted hairstyle were incredibly similar to a look worn by Wallis in a portrait taken in 1936 (pictured right) before she became the Duchess of Windsor — the same year King Edward VIII gave up the throne to marry her

‘I said, “but it’s your grandmother”, and he says, “but it’s the Queen”. And that was really the first moment that the penny dropped, that this wasn’t, it was easy for me up until then.’

Meghan – dressed in an elegant black belted dress by Giorgio Armani – added: ‘Thank God I didn’t know about the family, thank God I didn’t research, I would have been so in my head about it.’

Fergie – as Meghan referred to the Duchess of York throughout the interview – is renowned for her trademark deep curtsies to Her Majesty.

Who was Wallis Simpson and how did she shape the monarchy?

Born in 1896 in Pennsylvania, Wallis moved to London in 1931 after marrying her second husband, shipping executive Ernest Aldrich Simpson.

She struck up a friendship with Lady Thelma Furness who was the mistress of the then Prince of Wales.

Over the course of 1931, the Simpsons were gradually absorbed into Edward’s social life, spending frequent weekends with him at Fort Belvedere, his 18th-century home in the grounds of Windsor Great Park.

The turning-point in the friendship came in January 1934, when Thelma sailed off for a visit to the United States. According to Wallis, Thelma said laughingly, ‘I’m afraid the Prince is going to be lonely. Wallis, won’t you look after him?’

As the pair grew closer, he wooed Wallis with gifts of jewellery as well as money to buy clothes and other luxuries.

At Edward’s insistence, Wallis, wearing a tiara borrowed from Cartier, was formally presented to his parents, King George V and Queen Mary. The meeting, at which few words were exchanged, was not a success.

Outraged to have to receive ‘that woman in my own house’, the King gave orders that Mrs Simpson was not to be invited to any of the Silver Jubilee functions being planned for the following year, nor to the Royal Enclosure at Ascot.

As news of the affair spread, the Duchess of York — later Elizabeth, the Queen Mother — declared openly that she would no longer meet Mrs Simpson and would beat a hasty retreat whenever ‘that woman’ walked into the same party.

In 1936 Edward ascended the throne after the death of his father George V. He made clear his intentions to marry Wallis as soon as her second divorce came through.

It caused a national scandal and the Church of England decreed he couldn’t marry a divorcee with two living former husbands.

Wallis went to live in exile in France to escape the pressure, and in December 1936 Edward abdicated so they could marry, assuming the lesser title of Duke of Windsor.

The King abdicated, signing off his brief reign with a broadcast that referred to ‘the woman I love’.

Simpson received abusive and hostile hate mail and was accused of being a Nazi sympathiser.

In 1937, she and Edward went to Germany to meet Hitler, before the atrocities of the Second World War, with her husband keen for her to experience the pomp and ceremony of a royal tour, denied to Wallis in England.

Edward become governor of The Bahamas between 1940 and 1945, and the couple lived out the rest of their days enjoying the life of high society figures.

However, she never lost her affection for Ernest Simpson, her beloved second husband and her friends and confidantes have since said that she never wanted to divorce him.

Significantly, she kept writing to him and these intimate letters, which have only come to light in recent years, reveal that Wallis was beset by fears and regrets over how her life had turned out.

When the Duke died in 1972, Wallis became something of a recluse and was rarely seen in public before her death in 1986, at the age of 89.

During her interview, Meghan also claimed she received ‘no guidance’ from the institution.

She revealed: ‘There was no guidance, as well, right? There were certain things that you couldn’t do. But, you know, unlike what you see in the movies, there’s no class on how to speak, how to cross your legs, how to be royal.

‘There’s none of that training. That might exist for other members of the family. That was not something that was offered to me.

‘… Even down to, like, the national anthem. No one thought to say, “Oh, you’re American. You’re not going to know that.” That’s me late at night, googling how – what’s the national – I’ve got to learn this. I don’t want to embarrass them.’