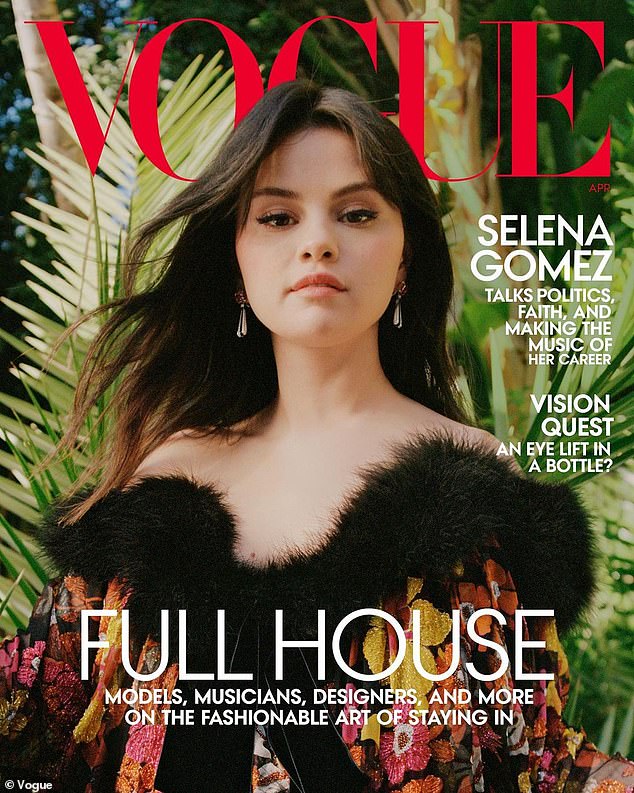 And this week the 28-year-old Texas native has landed on the cover of Vogue to promote her new collection of songs.

In her wide-ranging interview she talked about her recent bipolar diagnosis and how she copes with it, why she wants to shake her Disney image and prove she has a lot to bring to a movie, and what she did to deal with her anxiety and pain over lockdown from COVID-19 that brought her to tears.

She looks better than ever: Selena Gomez has a new Spanish-language EP, entitled Revelacion. And this week the 28-year-old Texas native has landed on the cover of Vogue to promote her new collection of songs

And she touched on her time in rehab. ‘I knew I couldn’t go on unless I learned to listen to my body and mind when I really needed help,’ she began, adding late-night anxiety was an issue.

‘And then I start thinking about my personal life, and I’m like, What am I doing with my life? and it becomes this spiral.’

She was recently diagnosed with bipolar disorder: ‘Once the information was there, it was less scary,’ she said.

One way she stays healthy is to step away from social media.

‘I woke up one morning and looked at Instagram, like every other person, and I was done,’ she shared. ‘I was tired of reading horrible things. I was tired of seeing other people’s lives. After that decision, it was instant freedom. My life in front of me was my life, and I was present, and I could not have been more happy about it.’ 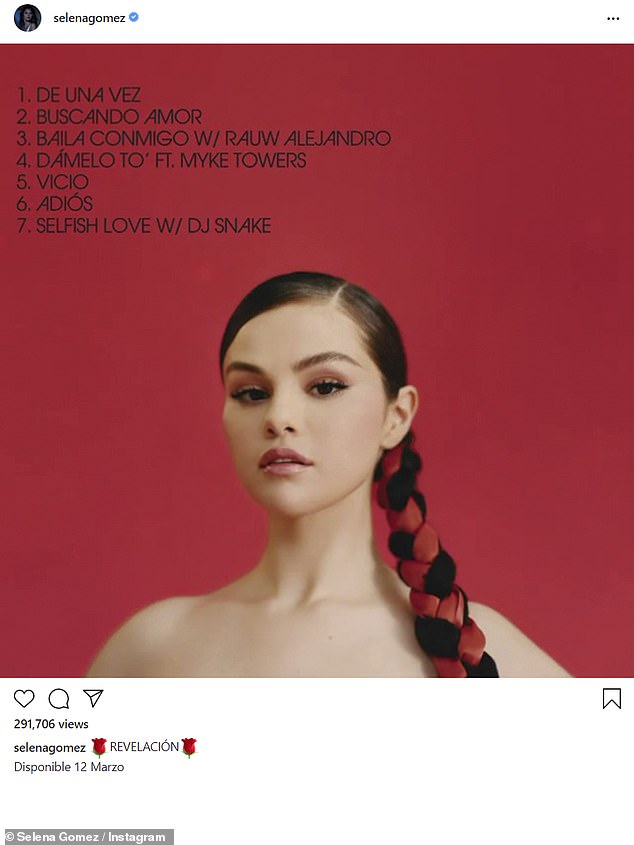 Building the hype: Gomez unveiled the track listing for her upcoming Spanish-language EP, entitled Revelacion, as well as a new article of album art

Her pain came out in her song Lose You To Love Me.

‘Once I stopped, and accepted my vulnerability, and decided to share my story with people—that’s when I felt release,’ she said; the song is about her ex Justin Bieber.

But she has hope for love:’ I can’t meet someone and know if they like me for me. To be honest, I just want to start over. I want everything to be brand-new. I want someone to love me like I’m brand-new,’ she said of her fame.

She also talked about how lockdown has been hard for her. 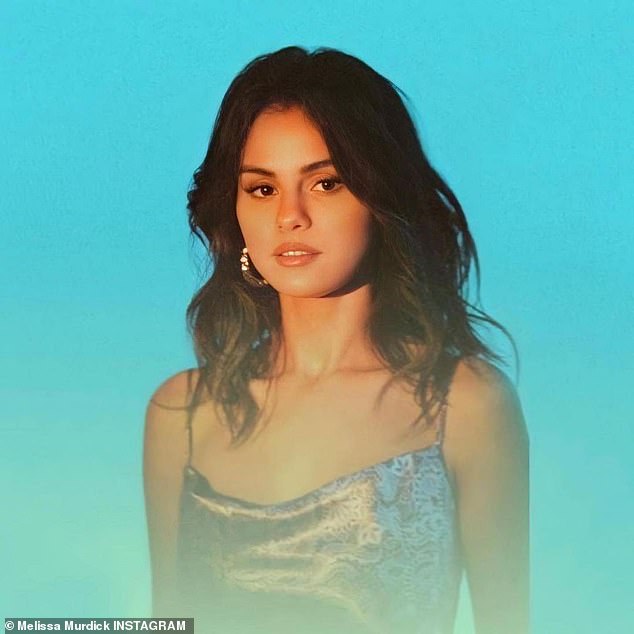 A new look: She has already released a music video to go with her album; seen here from Baila Conmigo

‘I watch CNN, but I try not to do it too much, because I’m empathetic to the point that I’ll cry at anything. I cried a lot during quarantine, just for the pain of everyone else,’ she said.

And she said she felt the Trump administration was responsible for ‘so many pointless deaths.’

As far as Black Lives Matter protests she said: ‘I thought, Who am I to talk? Am I going to post a picture and say, This is important? No, I need to learn; I need to figure out people’s pain.’

She turned over her In­stagram account to Kimberlé Crenshaw and Alicia Garza, and also interviewed Stacey Abrams for the digital organization She Se Puede and releasing PSA after targeted PSA. 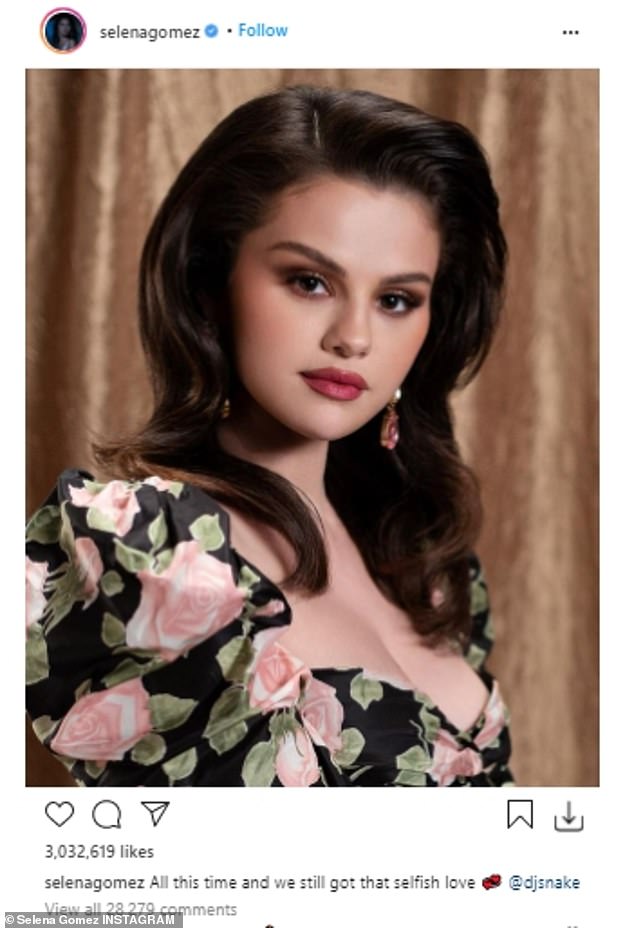 ‘My first engagement with Selena was revelatory: She expressed an honest disengagement with traditional politics while also showing a hunger for solving real, painful problems,’ said Abrams. ‘In that, she embodied the most powerful voter­—one who comes to participation because she knows better is both possible and her right.’

And she talked her acting career: ‘I haven’t even touched the surface of what I want to do. I can’t wait for the moment when a director can see that I’m capable of doing something that no one’s ever seen.’

As far as being a Disney kid she shared: ‘That was my job in a way—to be perfect. You’re considered a figure kids look up to, and they take that seriously there.’

Gomez added, ‘I think I spent so many years just trying to say the right thing to people for the sake of keeping myself sane… I’m just such a people-pleaser.’

But she hopes Hollywood sees her as more.

‘I still live with this haunting feeling that people still view me as this Disney girl,’ Gomez added.

She is currently shooting Only Murders In The Building with Steve Martin and Martin Short.

Last week Gomez unveiled the track listing for her upcoming EP Revelacion and a new article of album art. 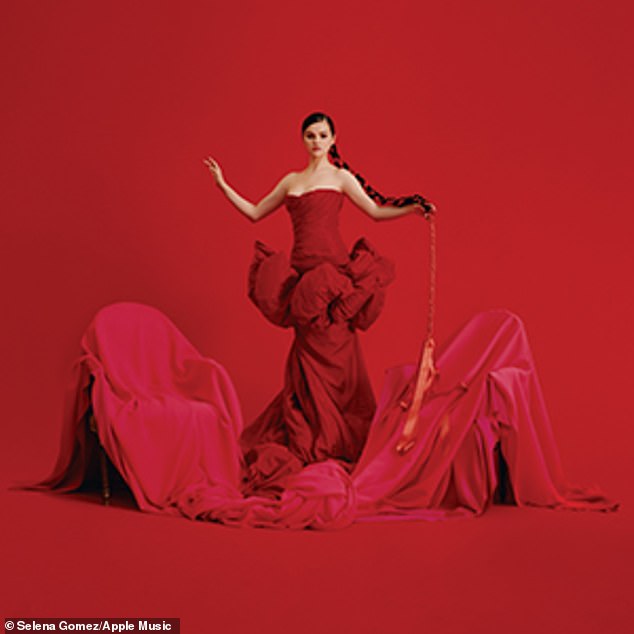 Coming soon: The songwriter’s forthcoming EP is set to be released on March 12th

The songwriter first teased a Spanish-language project in 2011 but made little reference to the idea over the next few years.

On January 14, the performer released the single De Una Vez, which seemingly confirmed suspicions that she was following through with her past statement.

That same day, a music video for the song premiered on Gomez’s official YouTube account and received critical praise for its visuals.

Further speculation regarding the project was raised when murals featuring various song titles were installed in the coastal Mexican town of Sayulita.

Later that month, Gomez officially made the EP available for preorder and released the single Baila Conmigo shortly afterwards.

The upcoming release will be comprised of seven songs, three of which include features from artists Rauw Alejandro, Myke Towers and DJ Snake.

Revelacion is set to be released on March 12.