Former president Donald Trump looked set to return to Florida on Tuesday after spending almost 48 hours holed up in his Manhattan skyscraper on his first visit to New York City since the end of his presidency.

Trump, 74, was said to have returned to the Big Apple to ‘look under the hood’ of his family firm as New York prosecutors continue a probe into his business.

On Monday night, the investigation spread to Chicago when the Manhattan district attorney subpoenaed documents from a company that invested in a skyscraper built by the former president in the city.

The inquiry – one of several involving the former president – poses the biggest current legal threat to Trump.

The ex-president was pictured arriving alone at his Manhattan Trump Tower apartment on Fifth Avenue on Sunday night flanked by Secret Service and NYPD, but has not been seen since.

He was expected to remain in Trump Tower throughout his visit and to depart again on Tuesday for his full-time residence in Mar-a-Lago, Florida.

On Tuesday afternoon, NYPD vehicles and secret service surrounded the building as it appeared that Trump was preparing to make his quick departure. 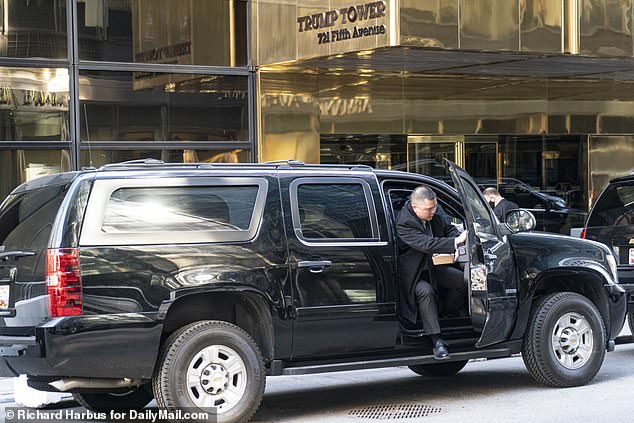 Donald Trump was expected to remain in Trump Tower throughout his visit and to depart again on Tuesday for his full-time residence in Florida. Pictured, security outside Trump Tower 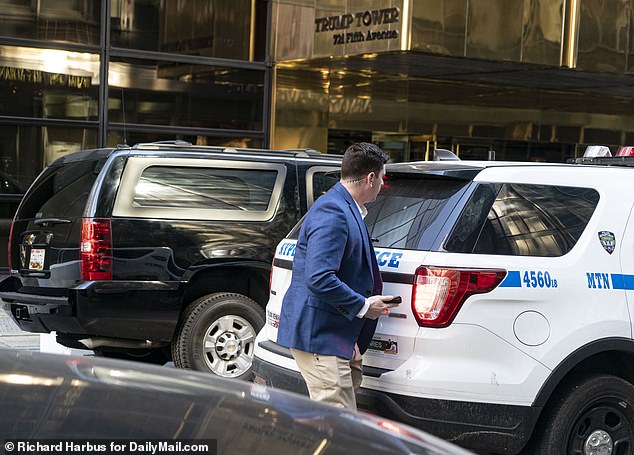 On Tuesday afternoon, NYPD vehicles and secret service surrounded the building as it appeared that Trump was preparing to make his quick departure (pictured) 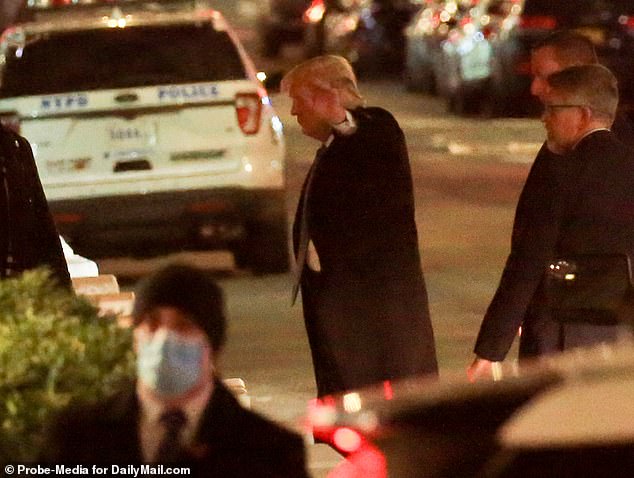 New York Daily News had reported that Trump returned to NYC as he wants to get up to speed on the ins and outs of his company, as he and business associates remain in the cross hairs of multiple state prosecutors.

The source also told Daily News that Trump wishes to reengage with the Trump Organization and ‘a major part’ of the trip will involve getting reaquainted with the business.

‘He’s quite curious about his businesses and his employees, his organization, and is eager to look under the hood,’ the source told the Daily News. ‘He’s not entirely sure of the role he will play, but he misses it, for sure.’

Trump had retained an ownership stake in the Trump Organization throughout his presidency but the day-to-day management was handed over to his two eldest sons Donald Trump Jr. and Eric.

The real estate and hospitality business remained headquartered in Trump Tower through his presidency.

It is not immediately clear who Trump planned to meet with while holed up in his Manhattan residence.

There were no plans to meet with prosecutors despite it coming as Manhattan District Attorney Cy Vance Jr. and state Attorney General Letitia James crank up their respective investigations.

On Monday, it emerged that Vance has subpoenaed documents from a company that invested in a Chicago skyscraper built by the former president.

The request was made late last year, and sought information from Fortress Investment Group. 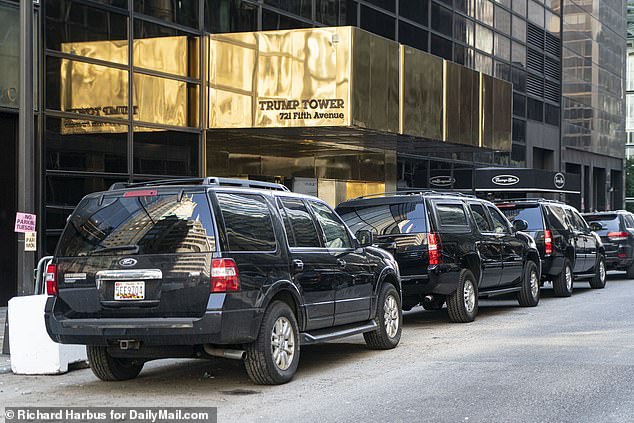 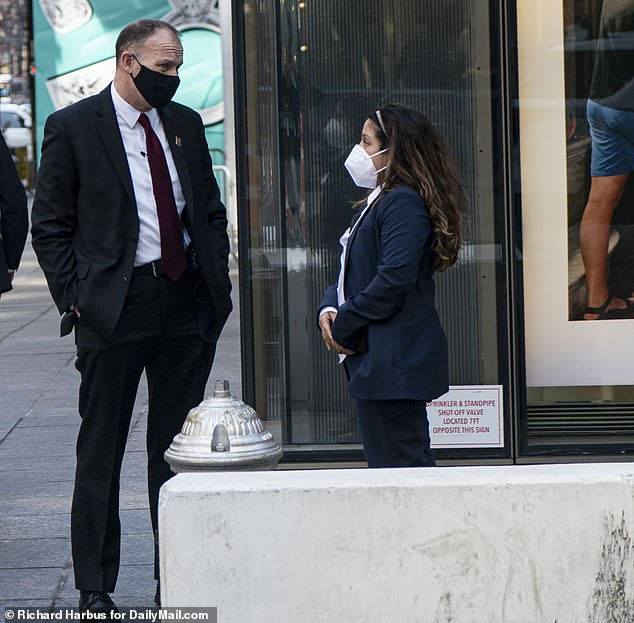 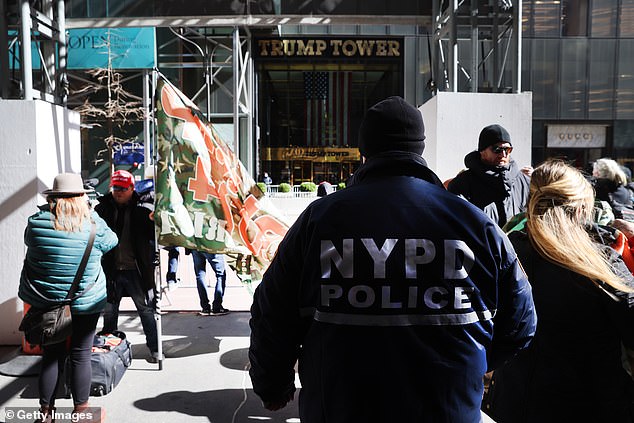 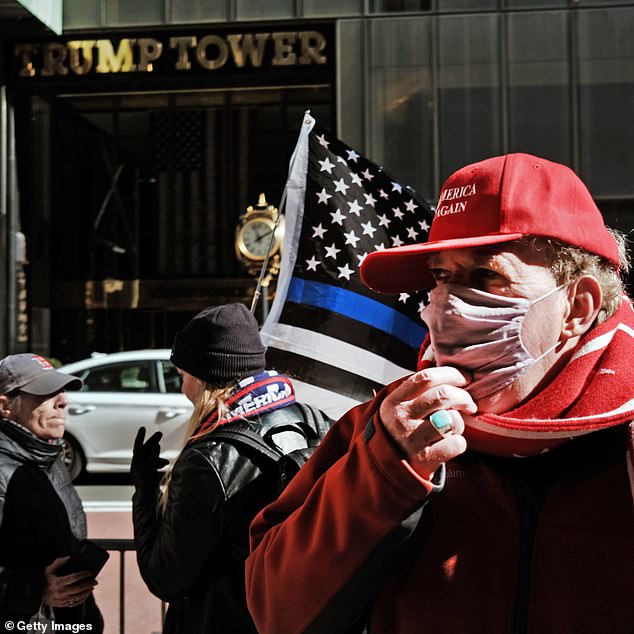 A small group of supporters of former president Donald Trump held a rally in front of Trump Tower on Monday, hours after he returned to his former full-time residence

They were handed a grand jury subpoena relating to the $130 million it provided to the Trump Organization for the construction of the Trump International Hotel and Tower, which was completed in 2009.

By 2012, Fortress, a New York-based investment management firm focused on real estate, had forgiven more than $100 million of the Trump loan, according to CNN, in order to secure a partial payoff.

The loan forgiveness came at a time of severe economic strain stemming from the financial crisis.

Vance is reportedly looking into whether Trump and his company reported the forgiven portions of the loan as income, and paid taxes on it, as required by law.

His inquiry appears focused on whether the Trump Organization misrepresented the value of assets in order to secure bank loans and lower tax rates.

The investigation will look into possible criminal insurance, bank and tax fraud. 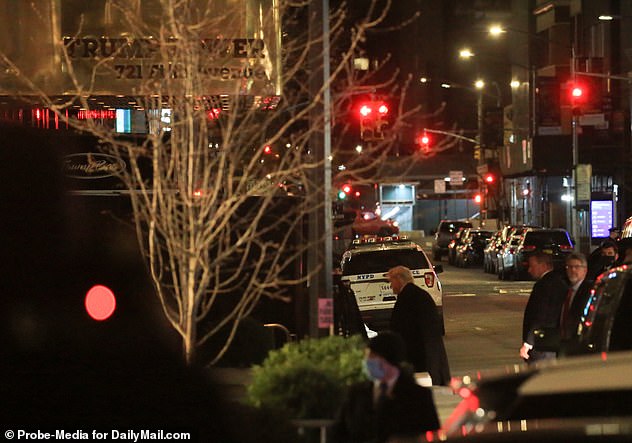 Trump lived at Trump Tower on Fifth Avenue with wife Melania and their son Barron prior to them moving to the White House in 2017. He returned by himself on Sunday 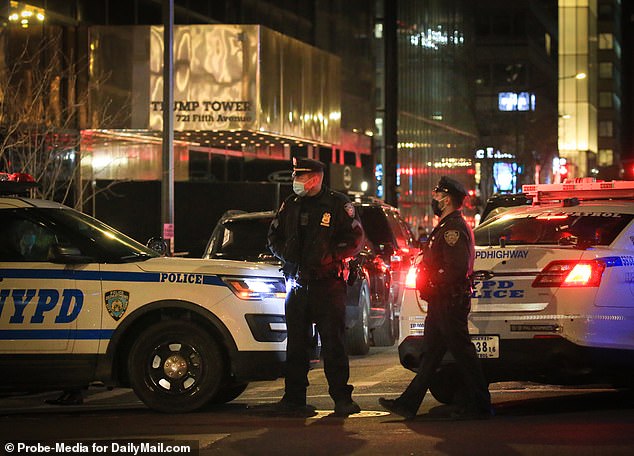 Prosecutors are expected to meet in person on Wednesday with Michael Cohen, the ex-president’s former personal lawyer – his seventh interview with Vance’s team.

Vance is also scrutinizing the actions of Allen Weisselberg, the Trump Organization’s longtime chief financial officer, and asking questions about his family.

‘They want him to turn’ on Trump, a person familiar with the probe told Reuters on Sunday.

Duncan Levin, a former fraud prosecutor in Vance’s office, said it’s significant that the DA is looking at real estate projects outside of New York as part of his Trump investigation. 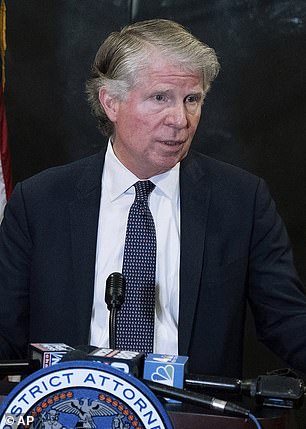 ‘It sounds like they are looking into every deal the Trump Org has done, whether those deals were in New York or beyond.’

Letitia James, the New York attorney general, is also investigating Trump for fraud, but on a civil level.

Her office recently obtained reams of tax records from the Trump Organization relating to its Seven Springs estate in Westchester County, a 213-acre swath of nature surrounding a Georgian-style mansion where the company once claimed a $21.2 million tax deduction.

The estate was bought by Trump in 1995 for $7.5 million, and is listed on his website as a family retreat, although Trump hasn’t been there in more than four years.

At the heart of the estate is the mansion built as a summer getaway in 1919 by Eugene Meyer, who went on to become Federal Reserve chairman and owner of The Washington Post.

In 2006, while pushing a plan to build luxury homes on the property near Mount Kisco, Trump floated the idea that he and his family were going to move into the mansion, but that never happened.

In 2009, Trump made a splash by allowing Libyan dictator Moammar Gaddafi to pitch his Bedouin-style tent there because he had no other place to stay for a U.N. visit: he said he ‘made a lot of money’ renting the land to the Libyan leader, although local officials halted work on the tent and Gaddafi never stayed there.

Cohen testified that Trump had financial statements saying Seven Springs was worth $291 million as of 2012.

He gave copies of three of Trump’s financial statements to the House Committee on Oversight and Reform during his testimony. 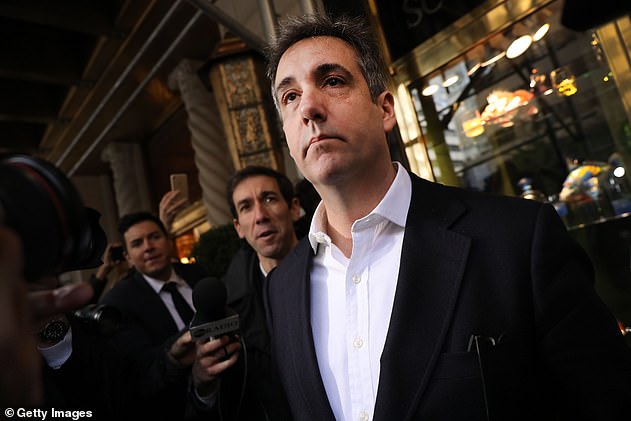 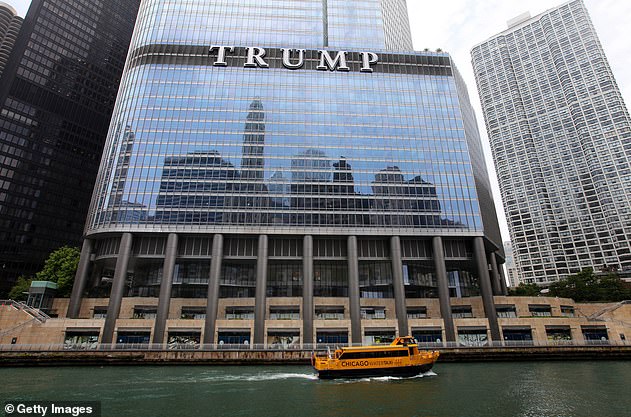 Cohen said the statements, from 2011, 2012 and 2013, were ones Trump gave to his main lender, Deutsche Bank, to inquire about a loan to buy the NFL’s Buffalo Bills and to Forbes magazine to substantiate his claim to a place on its list of the world’s wealthiest people.

Trump, on his annual financial disclosure forms while president, said the property was worth between $25 million and $50 million.

Levin told AP: ‘While a tax issue related to a conservation arrangement might not be as sexy as a hush-money payment, prosecutors are likely to focus on any violation of law that they find.

‘Remember, the authorities got Al Capone on tax evasion.’

Trump’s solo return to New York also comes amid reports of escalating tensions between Trump and his son-in-law Jared Kushner in the days since they both left DC.

Contradictory reports are circling from people close to the two men over who is to blame for the apparent rift.

Trump and Kushner appeared to actively avoid bumping into each other at the Trump National Doral golf course in Miami last Wednesday.

Heavy security remained in place around the building on Tuesday despite no glimpse of the former president.

Trump was not joined by wife Melania or by youngest son Barron on his New York trip. He was able to travel back to New York without having to quarantine or test out after it emerged that he had quietly received his vaccine before leaving the White House.

The trio had lived at Trump Tower on Fifth Avenue prior to them moving to the White House in 2017.

Heightened security measures were put in place around his Midtown Manhattan home after he was elected.

After leaving Washington DC in January, the Trumps have been at his Mar-a-Lago resort in Palm Beach, Florida.

Back in 2019, Trump officially changed his primary residence from New York to Florida. 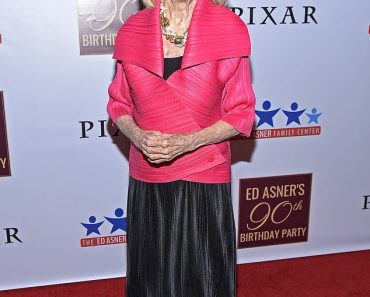 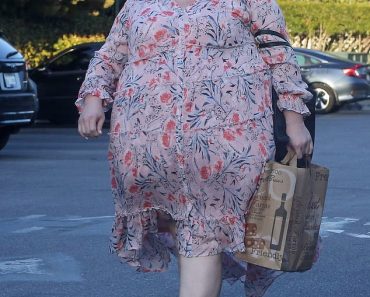 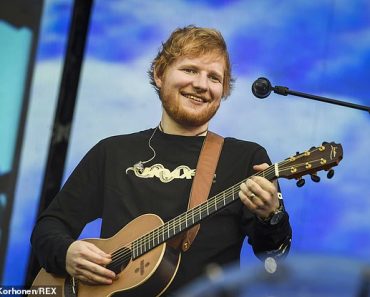 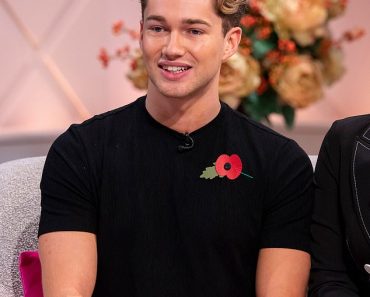