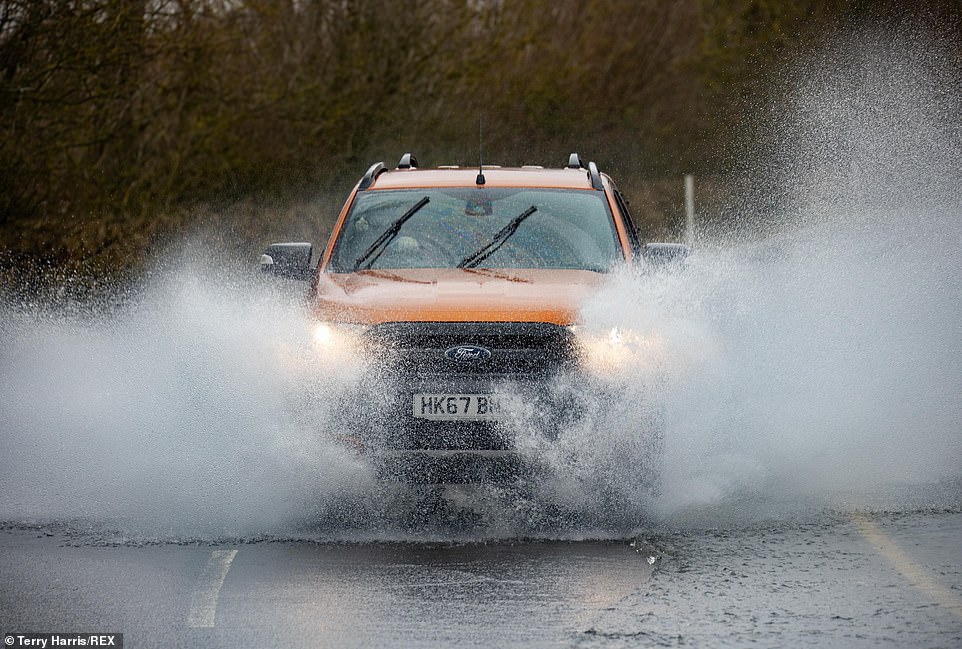 Britain is set is to be thumped by three days of fierce winds and heavy showers this week as the weather takes a sharp turn away from this morning’s sunshine.

The whole of England and Wales has been given a yellow weather warning from 9pm tomorrow when a band of wet weather comes in from the Atlantic, with the possibility of gusts reaching 75 mph in some parts.

The bad weather is expected to start in the north-west of Scotland on Tuesday, with a yellow warning of wind issued by the Met Office for the Highlands and Eilean Siar from 5pm to 11pm.

A forecaster said severe gales were expected and may lead to some disruption, with the rain advancing south tonight. Localised flooding is also expected in parts of the south as rainfall turns heavier and persistent into Wednesday.

The torrent of blustery showers will last through Wednesday with coasts battered by 60mph winds and some inland gales in the south.

While the main band is expected to have passed by Thursday it will leave behind a trail of wintry showers, knocking temperatures down into single digits.

Parts of Wales and the south-west have already encountered temperatures ‘several degrees below freezing’ on Sunday night and early Monday morning.

Meteorologist Aiden McGivern said powerful Atlantic gusts bringing the wind and rain had been steered into the UK by the changing jet stream. 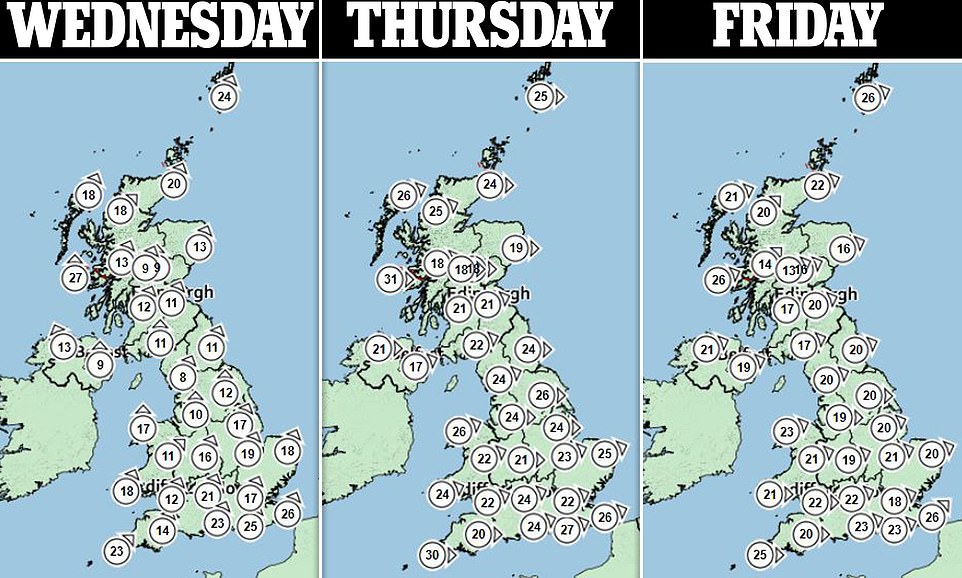 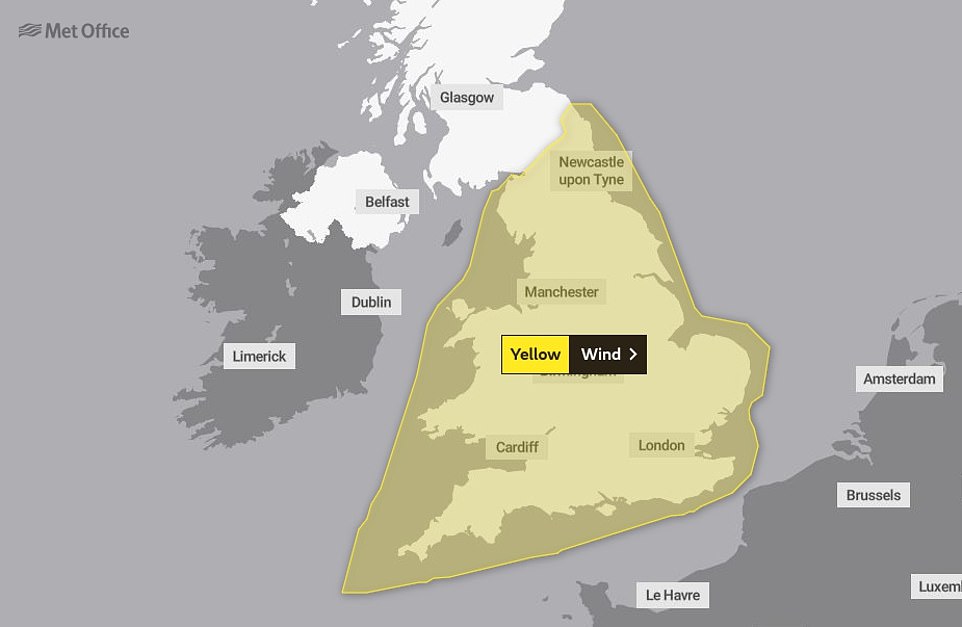 A yellow weather warning is in force for the whole of England and Wales from 9pm on Wednesday, with the possibility of gusts reaching 75 mph in some parts 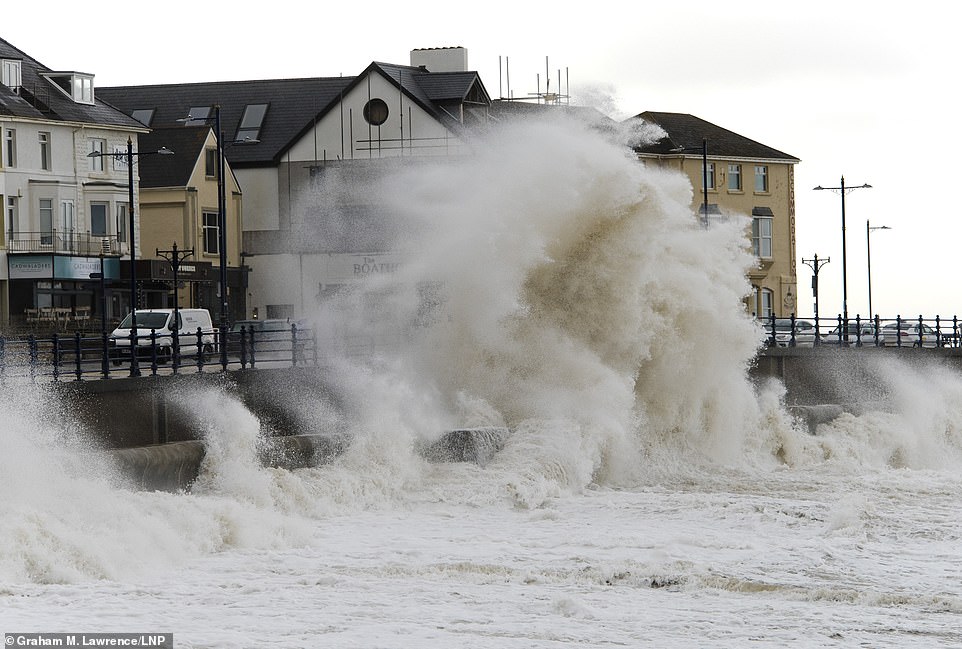 Person was baffled by gale force winds and massive waves at the start of February (stock photo of Porthcawl in Bridgend, Wales) 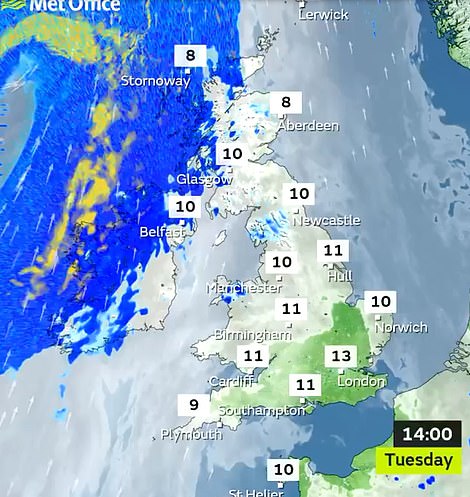 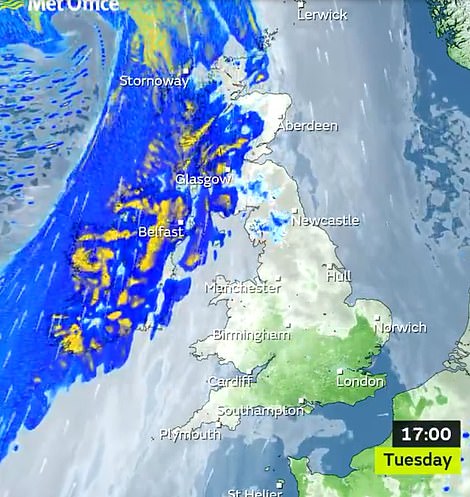 An intense band of rain is approaching the UK from the Atlantic Ocean and is expected to hit Scotland on Tuesday afternoon. Flood warnings are in place for parts of south England

The Met Office warning said: ‘Strong and gusty winds are likely to develop on Wednesday evening and continue into Thursday across England and Wales.

‘Gusts of 50 to 55 mph are possible inland, especially close to showers.

‘Gusts may reach 60 to 70 mph on coasts and hills, especially in the west, before gradually easing on Thursday afternoon.’

The forecaster warned the weather could cause delays to transport and short-term loss of power and other services.

The huge dampener comes two days after England enforced its first easing of lockdown restrictions with friends meeting up in parks as students went back to school.

Meeting a friend for a coffee on a park bench as well as outdoor picnics were among the first activities given the go ahead on Monday. 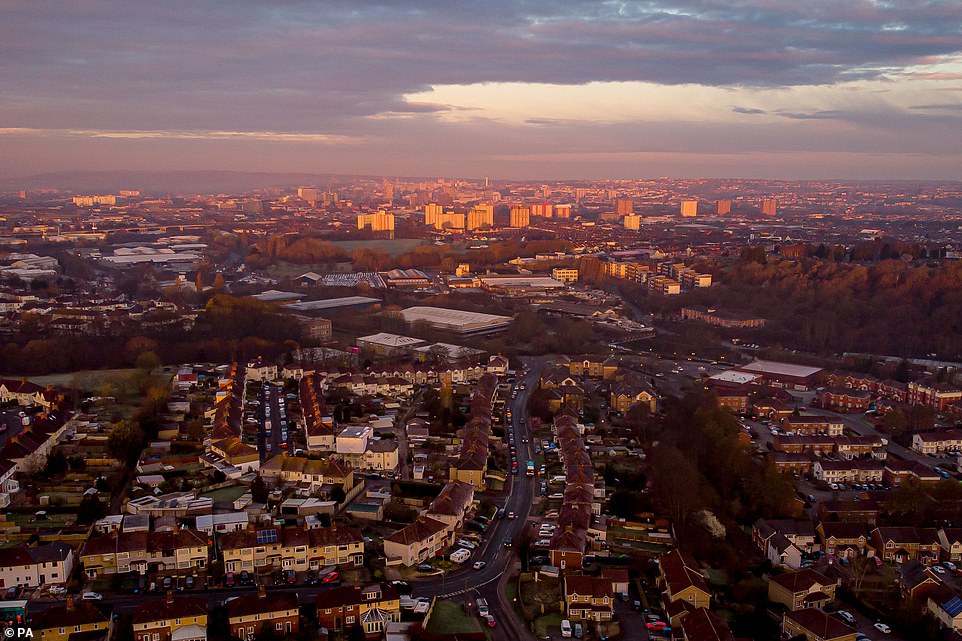 The stormy weather comes and made a calm start to the day across England, with sunshine and temperatures as high as 13°C in the south. Pictured: Bristol city centre this morning 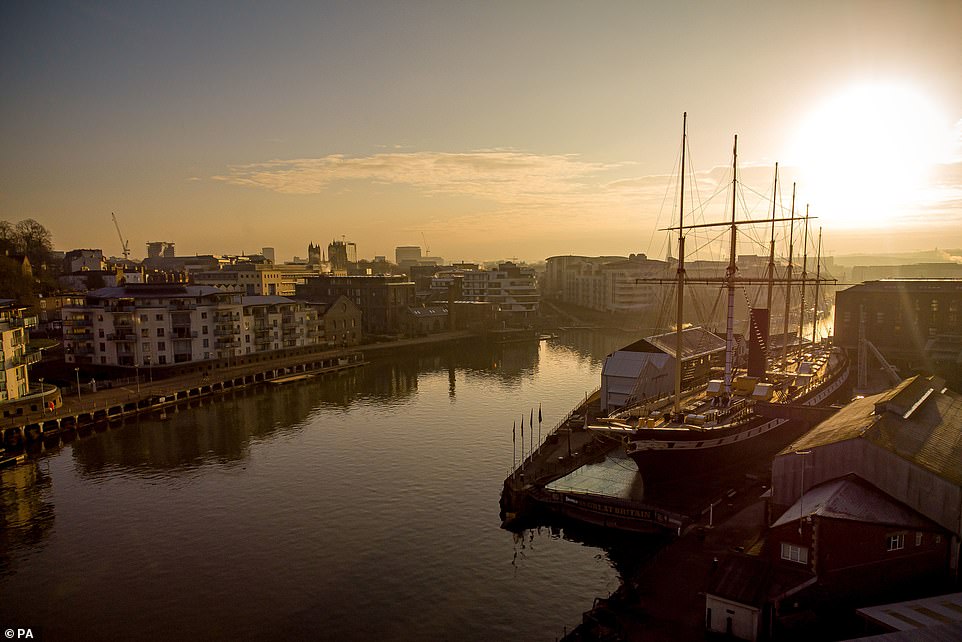 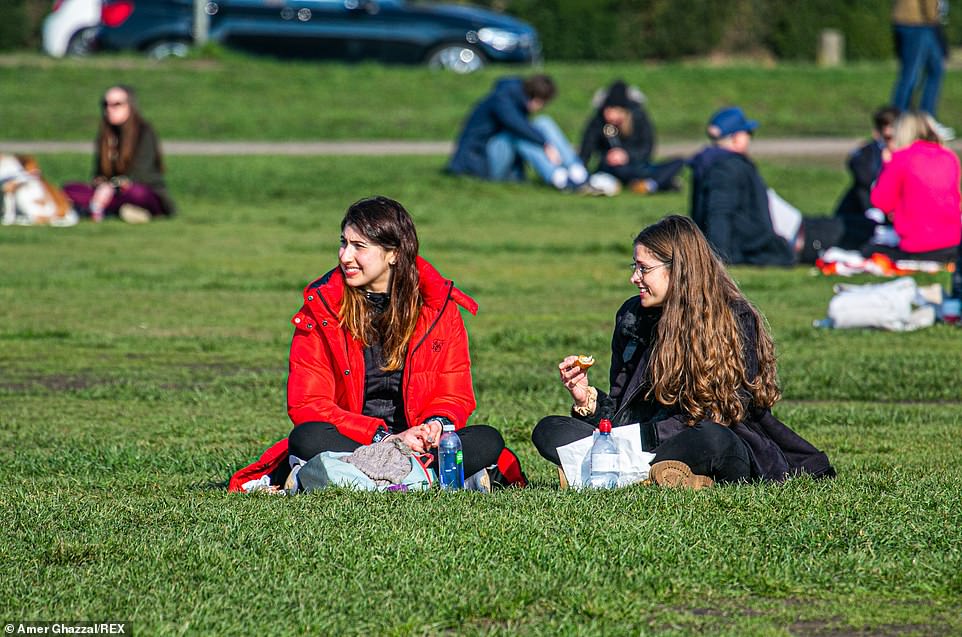 Reports of stormy weather come amid an easing in lockdown restrictions that brought out crowds of people out to parks to enjoy afternoon sunshine yesterday and today. Pictured: Wimbledon Common

Schools started their process of reopening with ministers asking pupils to take two quick-result tests per week in order to weed out asymptomatic carriers of Covid-19.

Downing Street said nearly 57 million lateral flow test kits, which can produce results in less than 30 minutes, have already been delivered to schools and colleges as part of the rollout.

This morning Britain enjoyed some glorious sunshine and temperatures up to 13C in the south, ahead of the intense band of wet weather moving in from the Atlantic.

The wind warning is in place for all of England and Wales until 3pm on Thursday.

Jim Dale, meteorologist for British Weather Services, earlier said of the stormy weather: ‘This is a fairly major system which we expect to affect the UK from Tuesday into Wednesday, it may be something we issue a warning for.

‘We are expecting severe gale-force gusts in exposed regions later on Tuesday and into Wednesday.

‘This system, which is a double-barrelled low-pressure organisation, has got some venom and is going to keep people on their toes.’