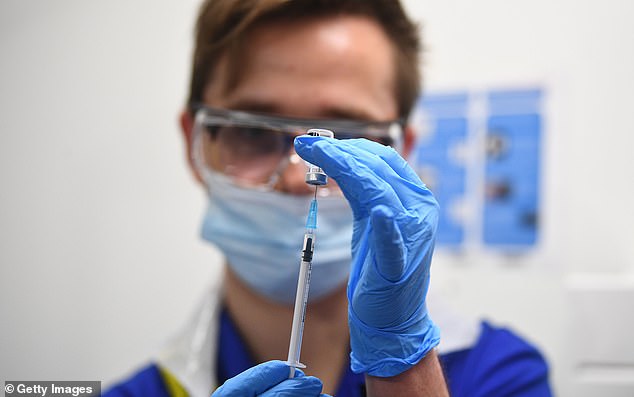 More than 400,000 people in England were wrongly marked as at high risk from coronavirus because of an over-cautious algorithm.

The QCovid algorithm, used to help identify who should be shielding or getting early access to vaccines, automatically put people in the high-risk pile when data was missing, health news site Pulse reported.

If their weight wasn’t recorded they were assumed to be obese and if their ethnicity was missing they were filed under black – both of which would assume someone was at a higher-than-average risk of severe Covid-19.

Doctors in York double-checking isolation lists said they found 110 cases where patients had been wrongly asked to stay at home and shield.

But the NHS today insisted that it was unlikely thousands of patients had been mistakenly told to shield or pushed to the front of the jabs queue.

The Department of Health said it had taken ‘a precautionary approach’ when assessing people’s risk from coronavirus.

The algorithm was developed to help doctors establish which patients were most at risk from the virus.

More than 1.7million people were added to the shielding list when the alogrithm was used last month, and a further 820,000 were prioritised for vaccines.

But GPs have raised concerns over the accuracy of the formula after spotting inconsistencies in who was asked to shield.

Dr Abbie Brookes, a GP working in York, told The Guardian 100 female patients who had diabetes while they were pregnant but were now healthy had been told to isolate.

She added there were another 10 patients for whom she ‘couldn’t see an explanation’ for why they had been added to the shielding list and invited for a vaccine.

HOMELESS BRITS WILL BE BUMPED UP VACCINE PRIORITY LIST

Matt Hancock today revealed homeless people in England will be bumped up the Covid vaccine priority list regardless of their age.

The Health Secretary said the decision — recommended by the UK’s top vaccination advisers — would ‘save more lives among those most at risk in society’. He added it was important ‘nobody gets left behind’.

The Joint Committee on Vaccination and Immunisation, which advises No10 on who should be inoculated, has until now ranked people by their age and whether they have any serious health conditions.

But the expert panel said it was now recommending the homeless were included because they ‘are likely to have health conditions that put them at higher risk of death from Covid’.

They will be mixed into the sixth priority group in the Government’s top nine, which includes everyone between the ages of 16 and 64 who has a serious health condition.

The JCVI said local NHS leaders can shorten the 12 week dosing regimen if they believe a homeless person is unlikely to show up for their appointment.

Homeless charity Shelter estimates there are around 280,000 people living rough in England.

It follows an announcement from Wales on Wednesday that it was bumping up homeless people on its priority list. Scotland and Northern Ireland are expected to follow suit.

Its advice doesn’t mean all homeless people must be vaccinated, but gives NHS bosses the flexibility to offer jabs to anyone who is homeless, regardless of their age or health status.

People could be reached by the NHS if they are in emergency accommodation or by local health teams who are already engaged with homeless populations.

Others are likely to already be known to health chiefs in their areas, the Department of Health said.

Dr Gavin Jamie, a GP in Swindon, also told the paper that he had a patient with fatty liver disease who had been asked to shield, which he presumed was because the algorithm had incorrectly coded him as having severe liver disease.

NHS Digital said the Department of Health made the decision to cautiously apply ‘high risk’ figures when data was missing.

It added that anyone who felt they were wrongly added to the shielding list should contact their GP so that it can be assessed.

A spokesman said: ‘Patients can speak to their GP or specialist clinician if they have questions, or if they feel they should no longer be identified as clinically extremely vulnerable.

‘As they have always done, GPs and specialist clinicians can make their own assessment and are able to add and remove individuals from the Shielded Patient List.

‘GPs can also review the free text entry alongside the high-risk flag on individual records to identify whether or not default values were used.’

Originally 2.2million people in England were on the list, many of whom were identified for a single reason.

These included obvious vulnerabilities, including having life-threatening conditions such cancer, taking immunosuppression drugs or suffering from genetic disorders.

But as the pandemic has progressed scientists have found a slew of other factors that, when combined, can put people at risk of dying from Covid – including being overweight, living in deprived areas or taking certain medications.

Oxford University researchers used a new algorithm to analyse a combination of risk factors based on patients’ medical records.

It comes after the Department of Education was forced into a humiliating U-turn over the summer when it used an algorithm to assign exam results to students.

The formula was described as a ‘mutant’ by Boris Johnson, and led to some pupils getting marks several grades below their teacher’s predictions.

A Department of Health and Social Care spokesperson said: ‘A precautionary approach has been taken towards certain missing data on a patient’s medical record.

‘In such cases, the patient’s medical record will indicate that an estimated value has been used as part of the decision to add them to the Shielded Patient List

‘Patients who were added to the Shielded Patient List in England using the COVID-19 Population Risk Assessment have multiple risk factors which, when combined, identify them as potentially at increased risk of becoming seriously unwell from coronavirus.

‘Single, isolated risk factors would not result in someone being added to the Shielded Patient List.

‘Clinicians can apply their clinical judgement and remove any of these patients from the Shielded Patient List and people with concerns can speak to their GP. Our model has been peer reviewed by independent academic experts and its performance was independently validated by the ONS.’