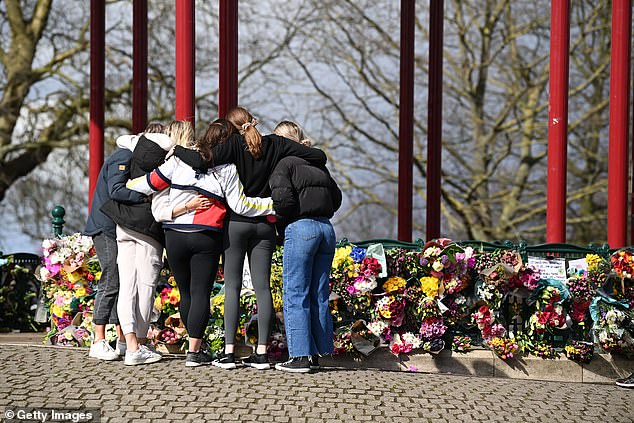 A police federation chief has defended the actions of officers at the vigil for Sarah Everard and claimed the event had been ‘hijacked’ by Antifa, Black Lives Matter and Extinction Rebellion protesters.

Ken Marsh, chairman of the Metropolitan Police Federation, said that 90 per cent of those at the Clapham Common vigil on Saturday had walked away before it became a rally in breach of lockdown.

Police faced heavy criticism and the Met’s Commissioner Dame Cressida Dick was under pressure to resign after officers were seen man-handling women at the event.

Mr Marsh says the peaceful vigil had been infiltrated by Antifa, BLM and Extinction Rebellion demonstrators – and officers had been punched, spat at and abused at the event.

‘Twenty-six of my colleagues were abused, spat at or punched,’ Mr Marsh told The Telegraph. ‘One black female officer was racially abused. An individual was arrested. This is unfortunately what happens with things like this. They get hijacked.’

Footage from the vigil shows mourners packed together around floral tributes left for Ms Everard – with a number of demonstrators shouting: ‘No justice, no peace, f*** the police.’

One of the attendees, stood next to the person filming, had brought a megaphone.

The atmosphere was peaceful in Clapham Common on Saturday as tributes were laid, but tensions rose after nightfall 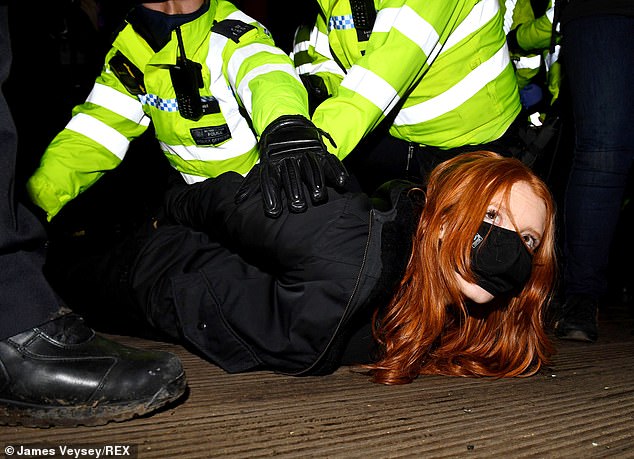 Patsy Stevenson, who was pictured being held on the floor by police at the vigil, said she was arrested ‘for standing there, I wasn’t doing anything’ 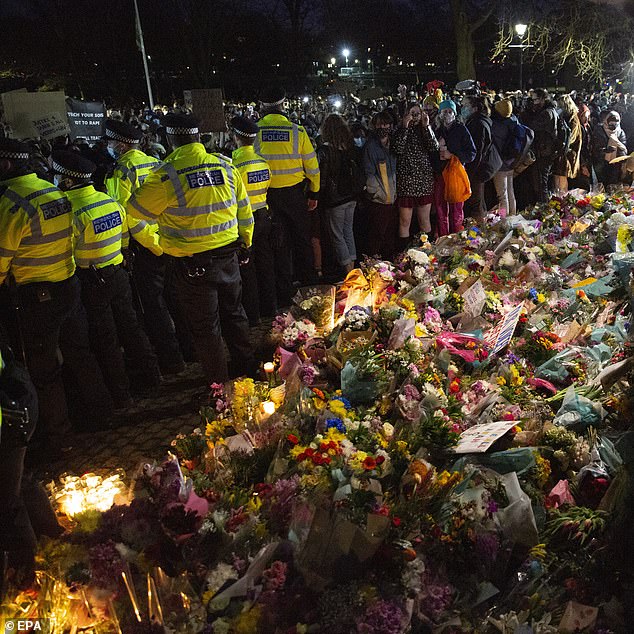 People attend a vigil by a band stand in Clapham Common, London, after the Reclaim These Streets vigil for Sarah Everard was officially cancelled in London, 13 March

Mr Marsh said four or five officers are required to restrain one person because they might fall or harm themselves if just one officer tried to.

‘It looks overbearing and heavyhanded, it’s not. It’s to protect you as much as us,’ he said.

‘If it was just a peaceful vigil, there would have been no issues but it wasn’t unfortunately. We had to take the action we had to take.’

A senior Met source said they had seen body-worn footage and by one stage of the evening the event had ‘definitely’ become ‘a protest and not a vigil’.

The source said: ‘There is a real discomfort at what we feel has been the politicisation of the police. We don’t always get it right but we must be allowed to be operationally independent.

‘There is no doubt that it will make things difficult during the remainder of lockdown because groups intent on causing trouble will see this is an opportunity to make the police look bad.’

Former Conservative Party leader Sir Iain Duncan Smith urged caution before passing judgment, adding that he had been contacted by a female officer who had been on duty that night.

He told the House of Commons: ‘She was threatened. She was told she should have been murdered, not Sarah Everard, and she was manhandled. 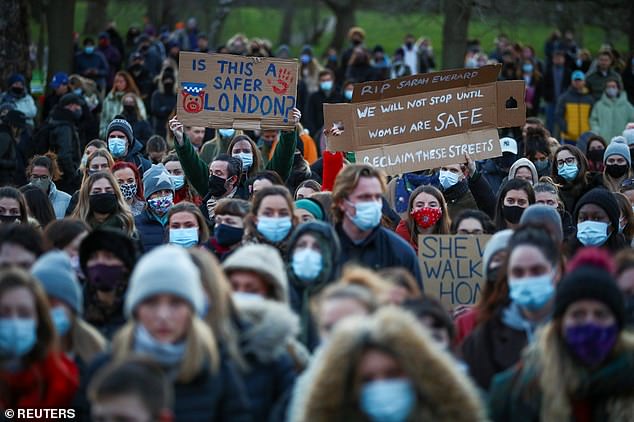 People gather at a memorial site in Clapham Common Bandstand, following the kidnap and murder of Sarah Everard, in London, March 13. One attendee is seen holding a sign with a cartoon pig wearing a police hat, a red handprint, and the words: ‘Is this a safer London?’ 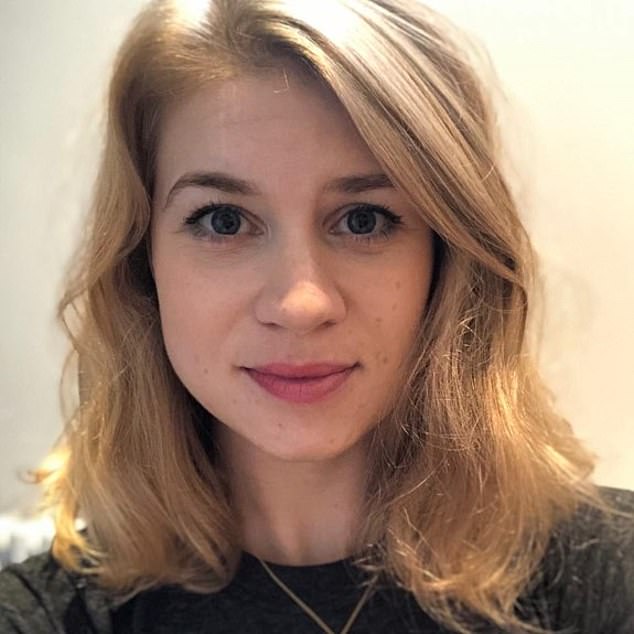 Pictured: Sarah Everard. A senior Met source said they had seen body-worn footage and by one stage of the evening the event had ‘definitely’ become ‘a protest and not a vigil’

‘We should be dialling this down not raising the temperature by calling for resignations.’

Home Secretary Priti Patel, who has commissioned an investigation into officers’ actions by HM Inspectorate of Police, replied: ‘I have been written to by many police officers expressing very similar sentiments from their own experiences.’

The day after the gathering, Mr Marsh said: ‘Yesterday, 26 Metropolitan Police officers were assaulted – punched, kicked, spat at – policing Covid-19 lockdown laws that a democratically-elected Government have imposed… laws that the Mayor of London has called on us to enforce to keep Londoners safe.

‘Political leaders should be doing much more to support the police officers they have put in this impossible position. 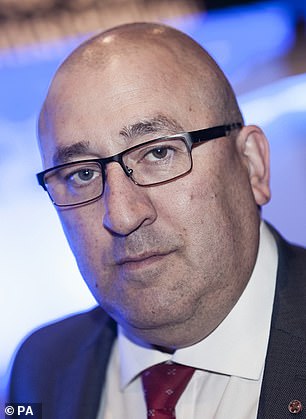 Ken Marsh, chairman of the Metropolitan Police Federation, said that 90 per cent of those at the Clapham Common vigil on Saturday had walked away before it became a rally in breach of lockdown

‘The thoughts of the Metropolitan Police Federation remain with the family and friends of Sarah Everard.’

Now, following a meeting of the Government’s Crime and Justice Taskforce chaired by the Prime Minister, Downing Street said it was taking a series of ‘immediate steps’ to improve security.

Among them is to roll-out across the country pilots of a programme where uniformed and plain clothes officers seek to actively identify predatory and suspicious offenders in the night time economy.

Dubbed ‘Project Vigilant’, the programme can involve officers attending areas around clubs and bars undercover, along with increased police patrols as people leave at closing time.

Project Vigilant was originally launched in 2019 by Thames Valley Police, and last year won a crime prevention award from the International Association of Chiefs of Police.

Other steps unveiled by Downing Street include a doubling of the Safer Streets fund – which provides neighbourhood measures such as better lighting and CCTV – to £45 million.

It also said ministers were committed to working with police forces and with police and crime commissioners to ensure the measures were more focused on preventing sexual violence.

Boris Johnson said it could mean siting measures in parks and routes used by women on their walks home.

‘The horrific case of Sarah Everard has unleashed a wave of feeling about women not feeling safe at night. We must do everything we can to ensure our streets are safe,’ he said.

‘Ultimately, we must drive out violence against women and girls and make every part of the criminal justice system work to better protect and defend them.’

Earlier the PM backed Metropolitan Police chief Dame Cressida Dick following calls for her resignation in the wake of the weekend’s events on Clapham Common where crowds gathered to remember the 33-year-old marketing executive.

Serving Metropolitan Police officer Wayne Couzens, 48, has been charged with her kidnapping and murder. 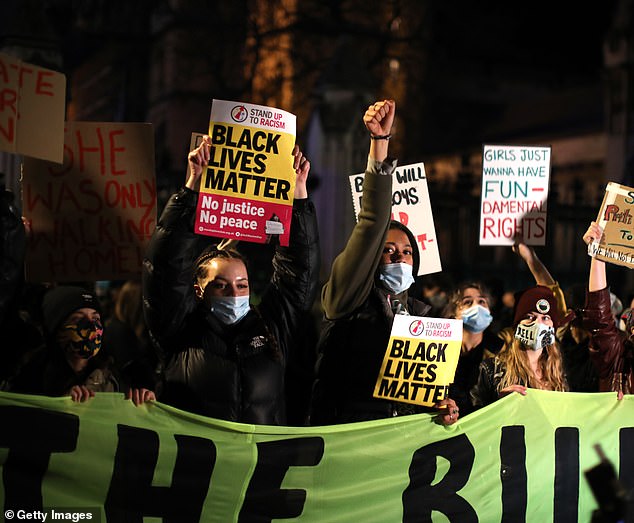 March 15, after the vigil: Crowds chanted ‘black lives matter’ outside the Houses of Parliament, as protestors raised various issues during the demonstration

‘Too many of us have walked home from school or work alone, only to hear footsteps uncomfortably close behind us,’ she said.

‘Too many of us have pretended to be on the phone to a friend to scare someone off.

‘Too many of us have clutched our keys in our fist in case we need to defend ourselves and that is not OK.’

She said footage of the Clapham Common event – where four protestors – were arrested had been ‘upsetting’.

But she defended restrictions on protests put in place to curb the spread of coronavirus, urging people not to participate in large gatherings while they remained in force.

‘The right to protest is the cornerstone of our democracy, but the Government’s duty remains to prevent more lives being lost during this pandemic,’ she said.

The Clapham Common vigil had originally been organised by the protest group Reclaim These Streets before it was forced to cancel after police said it would be in breach of coronavirus rules.

An organiser from the group said on Monday she did not want Dame Cressida to resign, but asked for the police chief to meet with them.

Anna Birley told ITV’s Good Morning Britain: ‘We are a movement of women seeking to support and empower other women, and as one of the most senior women in British policing history, we do not want to add to the pile-on.’

Hundreds of women have left floral tributes in the park near to the route where Ms Everard, who went missing while walking home from a friend’s flat on March 3, walked.

Throughout Monday, mourners arrived from across the capital to leave flowers and cards on the bandstand at Clapham Common.