Two migrant teens drowned while trying to cross the Rio Grande River back to into Mexico after being caught on the U.S. side of the border by patrol agents, a disturbing new video shows.

The tragic crossing comes after House Speaker Nancy Pelosi claimed the situation at the border was ‘under control’ even as government figures show record numbers of people trying to cross into the U.S. at the southern border.

The drowning happened on Wednesday afternoon near Laredo, Texas, as the two teens were among a group of migrants who attempted to flee just after U.S. Border Patrol agents arrested several people during an alleged human smuggling bust in Texas.

The two migrants are believed to have died while trying to escape custody, the U.S. Border Patrol Laredo Sector told WOAI-TV in a statement.

Two migrants teens drowned while trying to cross the Rio Grande River back into Mexico, a disturbing new video shows. This shot shows them swimming across the river 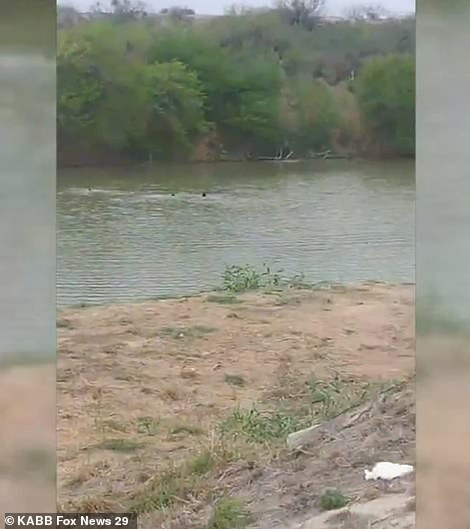 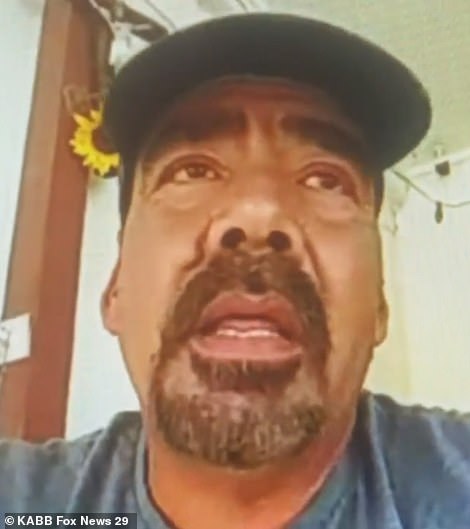 Some of the migrants trying to flee Border Patrol custody were able to swim back to Mexico for safety while others were arrested. Jesus Vargas, a local fisherman who witnessed the drowning from the Texas side of the riverbank, was able to save a drowning boy with his fishing pole, local media reported 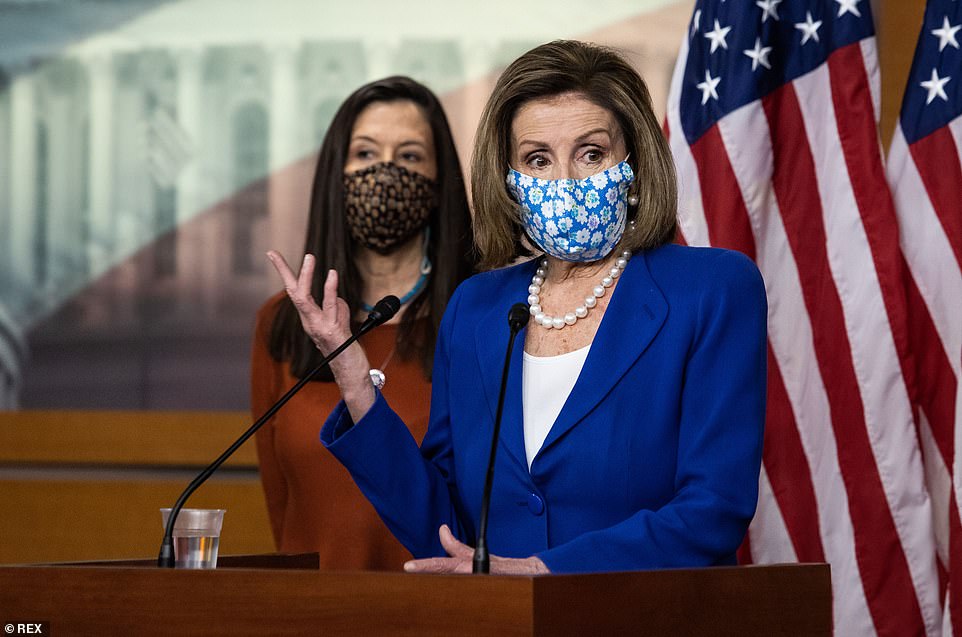 ‘The Biden administration has this under control,’ House Speaker Nancy Pelosi said Friday when asked about the situation at the southern border

‘Border Patrol Agents assigned to the Laredo Sector identified a vehicle suspected to be involved in alien smuggling activity,’ the statement reads.

Several of the truck’s occupants fled into the river toward Mexico as others were taken into custody by border agents.

One of the teens who entered the river drowned and the body was recovered by Mexican authorities.

‘A second was last seen floating away and has not been located,’ according to the statement.

The video shows several migrants fighting for their lives in the Rio Grande after being caught in its currents.

A local fisherman, Jesus Vargas, who witnessed the drowning on the Texas side of the border told KGNS-TV that he saw several females drowning.

‘I was coming out of work and there was a truck in front of me, almost took my front end off,’ Vargas told the station.

‘An officer was behind it and just followed it and they went all the way to Calton Road and then all the way to the river. A bunch of people started to jump in the river – but when they were almost halfway there across they were drowning.’

Vargas, armed with a fishing rod, threw a line out into the river to help save people from drowning and was able to rescue a young boy.

‘He just put his little arm out and got the string and that’s the way I pulled him out, but the rest of them just drowned floating down the river,’ Vargas told KGNS. 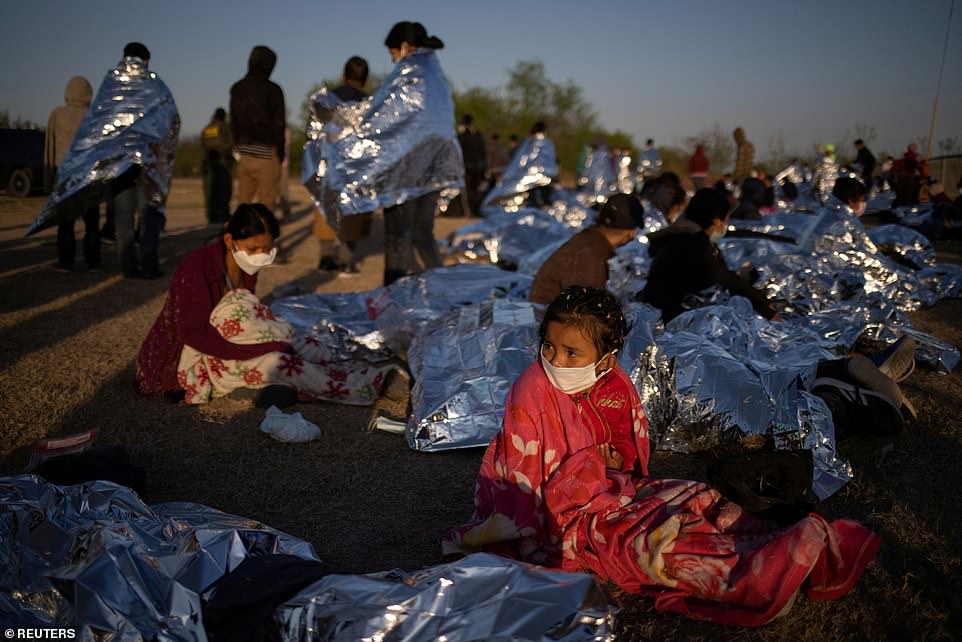 Hennessy, a four year old asylum-seeking migrant girl from Honduras, awakes at sunrise next to others who took refuge near a baseball field after crossing the Rio Grande river into the United States from Mexico on rafts, in La Joya, Texas, on Friday 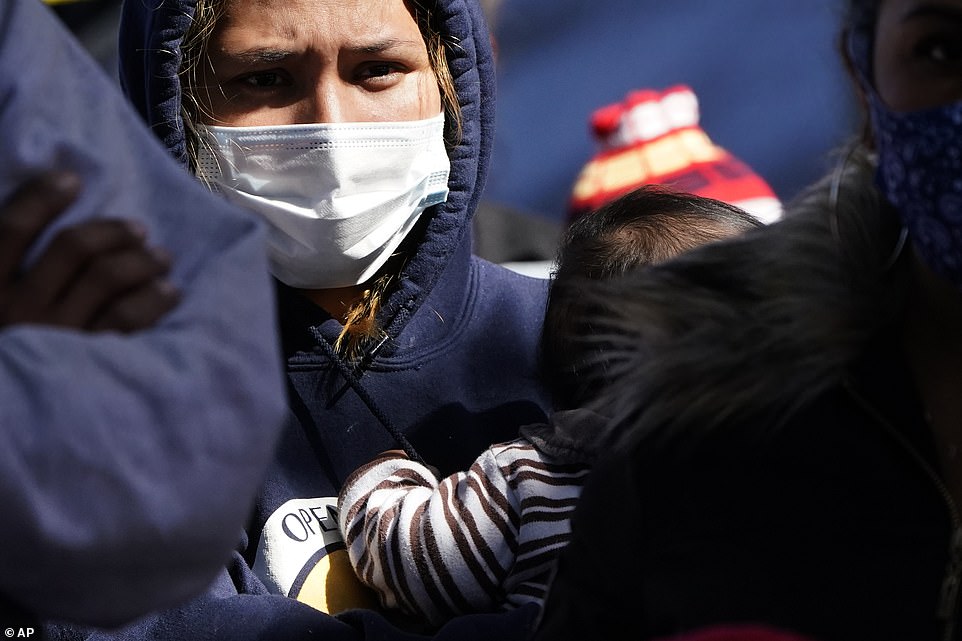 A woman holds a child as she waits at a makeshift camp of migrants at the border port of entry leading to the United States, on Wednesday in Tijuana, Mexico 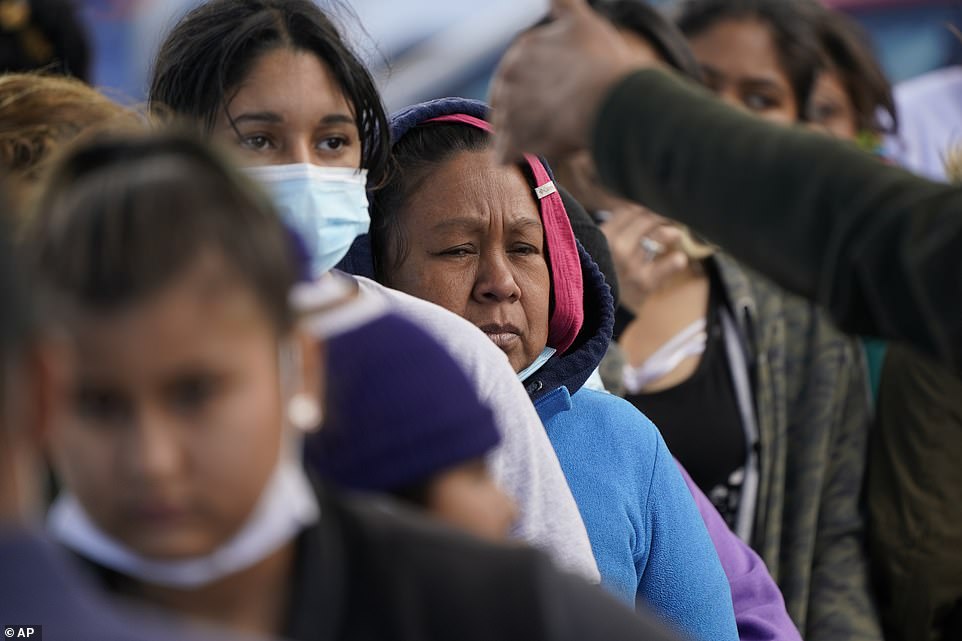 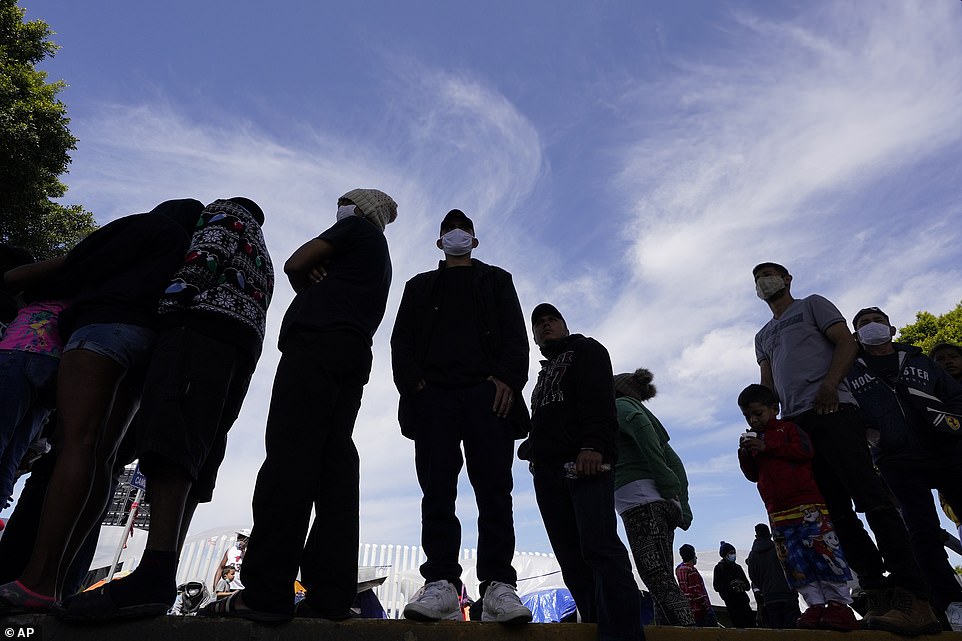 Migrants line up for a free meal at a makeshift camp of migrants at the border port of entry leading to the United States on Wednesday in Tijuana, Mexico

In the video, a Border Patrol SUV is seen on the ridge and agents appear to be standing and watching as several people struggle in the water.

Vargas said several people were able to swim and safely make it back into Mexico.

Meanwhile, Pelosi had made her statement at a press briefing at the Capitol, after White House Press Secretary Jen Psaki had to walk back her own comment Thursday after briefly referring to the crush of childhood migrants at the southern border as a ‘crisis.’

When a reporter asked her to follow up, Psaki corrected herself and referred to ‘challenges’ at the border.

The comments came amid other dramatic pictures of migrants crossing Mexico toward the U.S. – even with one camp set up in Tijuana, Mexico flying a Biden flag – perhaps in support of the president’s advertised ‘more humane’ treatment of migrants at the border. 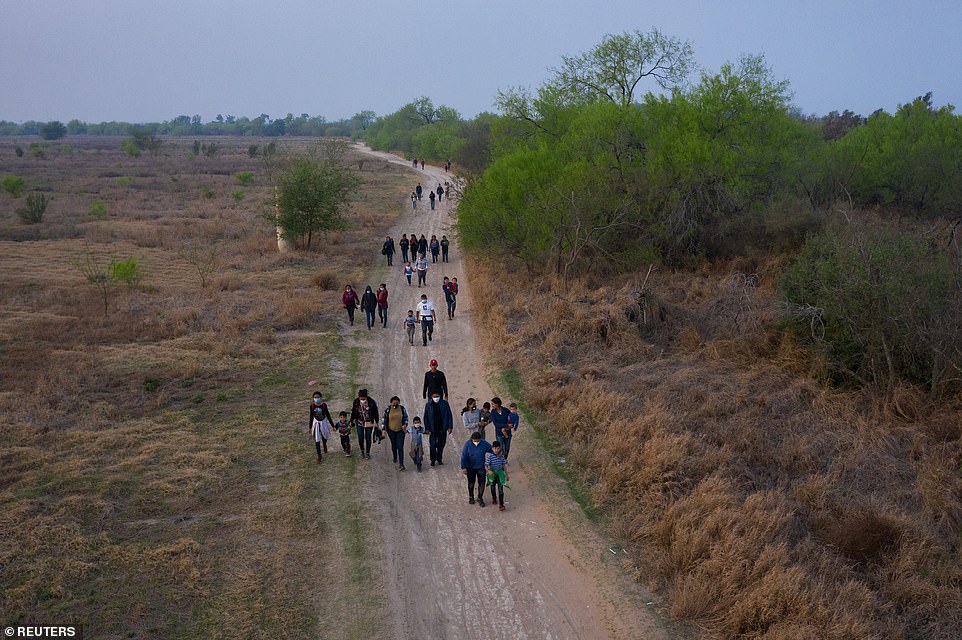 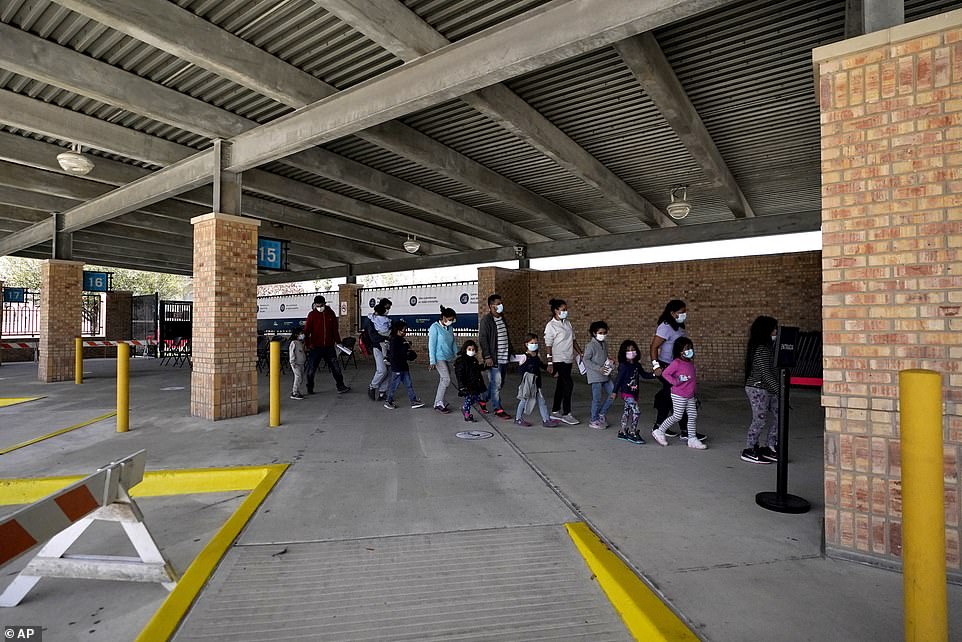 Some migrants stood in line for buses to U.S. destinations after being released from Customs and Border Protection custody 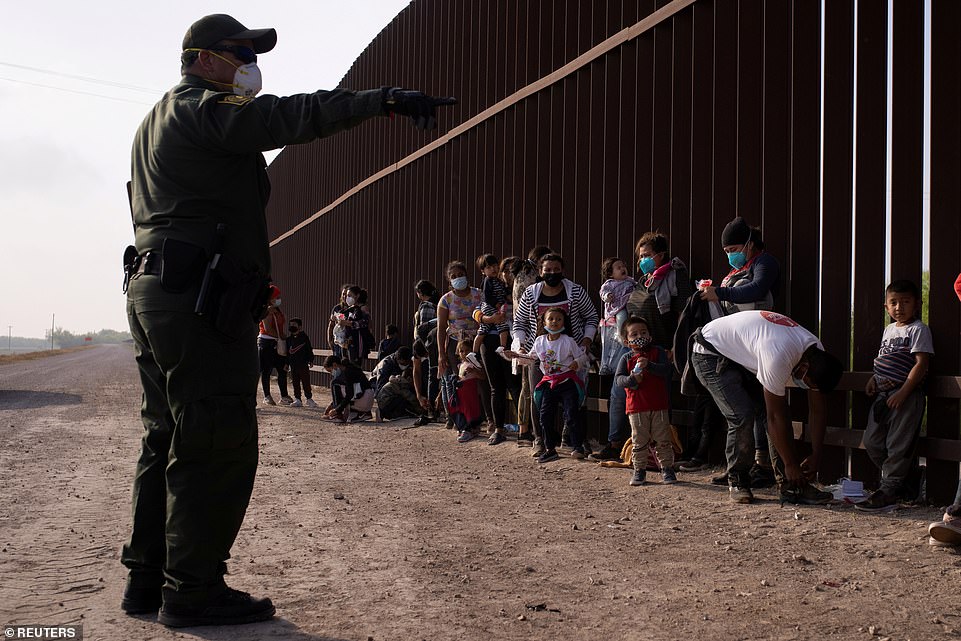 Pelosi, asked for her view, described thematic changes from the Trump administration.

‘The Biden administration has this under control. It is changed. And it will take some time. But it is values based. Humanitarian in its aspects. Pragmatic with a plan to get things done,’ she said.

‘I think that the administration is pulling this thing under control, and I think it’s important to know that,’ Pelosi said. 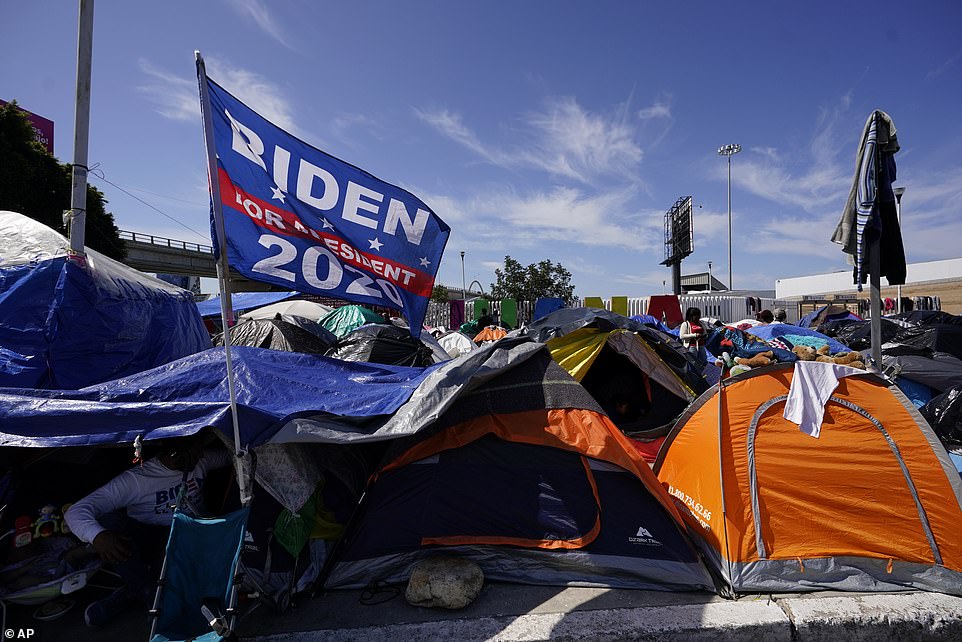 A Biden flag waves over a migrant camp in Tijuana, Mexico. Biden’s messaging on the immigration may be a factor in the rise of migrants attempting to cross into the United States 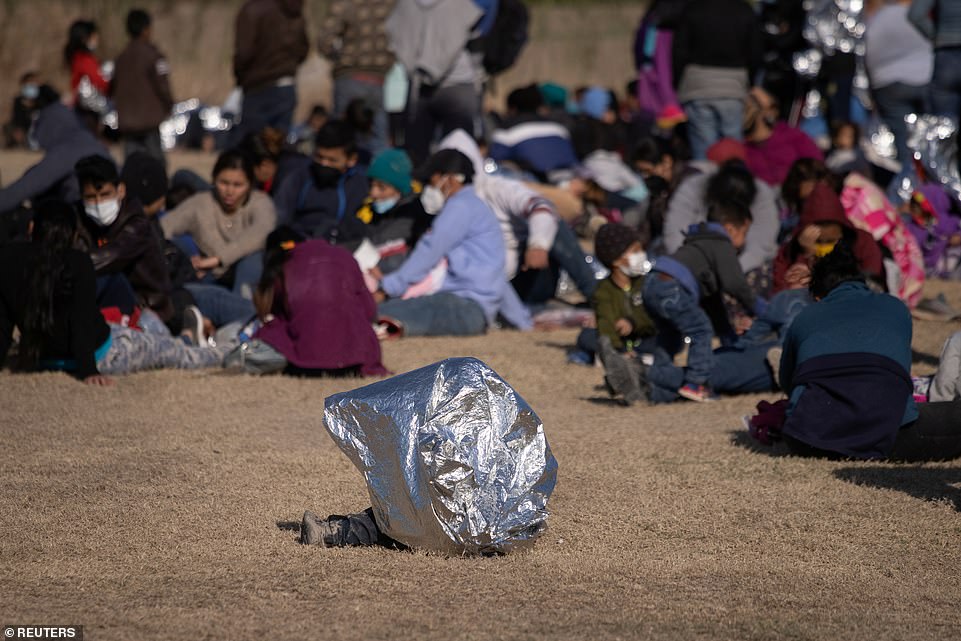 A migrant boy plays with an emergency blanket, which was provided by Border Patrol agents 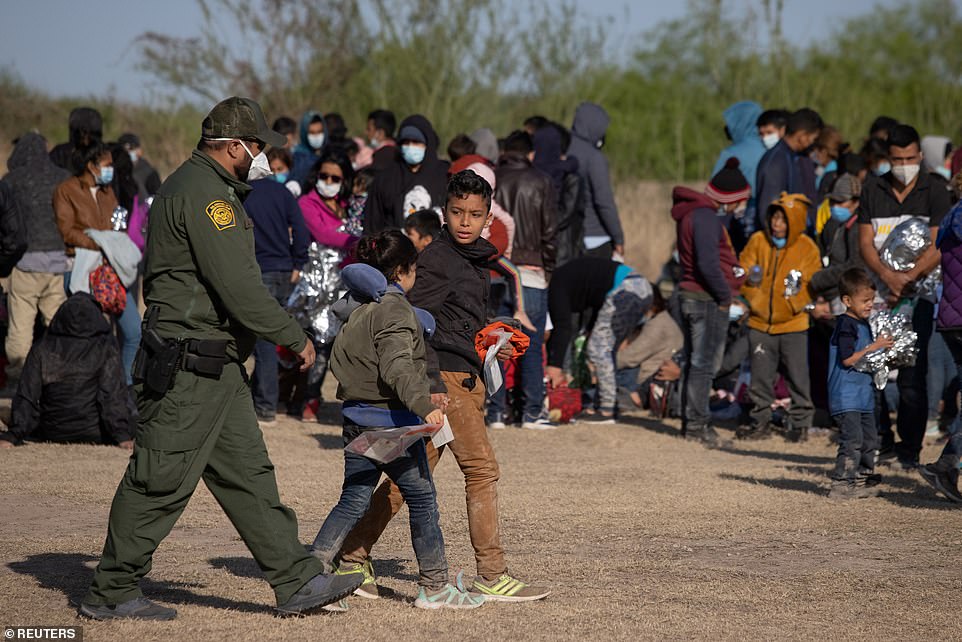 Two unaccompanied minors are escorted by a Border Patrol agent as migrants take refuge near a baseball field in La Joya, Texas after crossing the Rio Grande river

She contrasted the situation with attitude of the Trump Administration, and added: ‘In the spring, more people do come, so there will be more.

She said of potential immigrants: ‘They have to know as the president has said, don’t come,’ she said.

‘It is change and it will take some time, but it is values-based, humanitarian,’ she continued, calling it ‘pragmatic with a plan to get things done.’ 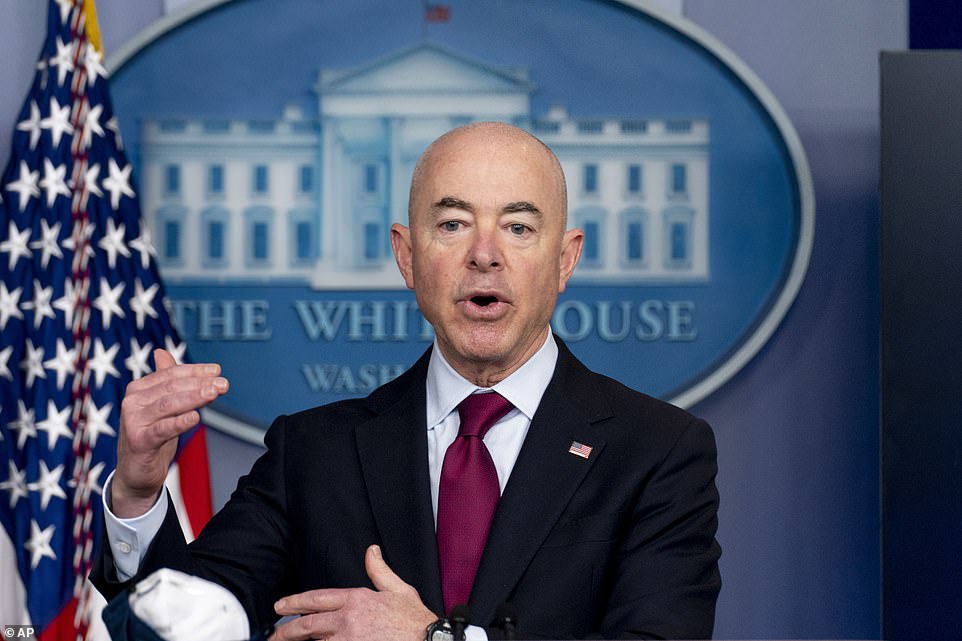 Homeland Security Secretary Alejandro Mayorkas will visit the U.S.-Mexico border in El Paso on Friday with a group of bipartisan senators

HHS head Alejandro Mayorkas pointedly chose not to use the word ‘crisis’ when appearing at the White House, but in a congressional appearance called it ‘undoubtedly difficult.’

Mayorkas visisted the border Friday with senators from both parties amid policy challenges and political blowback – with Republicans blaming the problem on Biden’s immigration policies, which they say are acting as a draw for migrants.

The trip was closed to the media – ‘due to privacy and COVID-19 precautions,’ the Department of Homeland Security said.

In the latest sign of what the administration faces, Customs and Border Protection has requested aircraft to move migrants in its custody to processing facilities on the Canadian border to alleviate the crunch, the Washington Post reported. 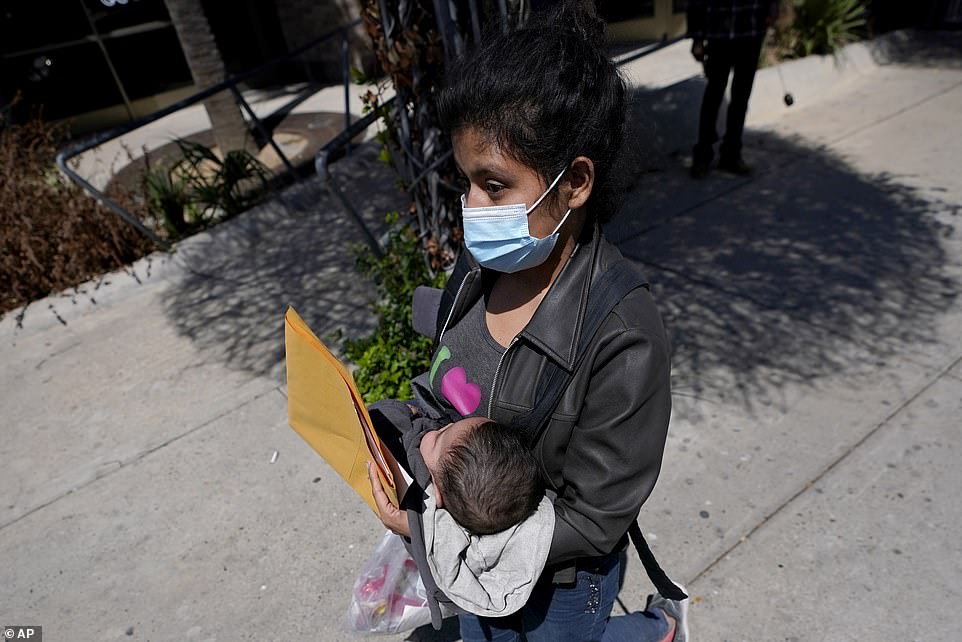 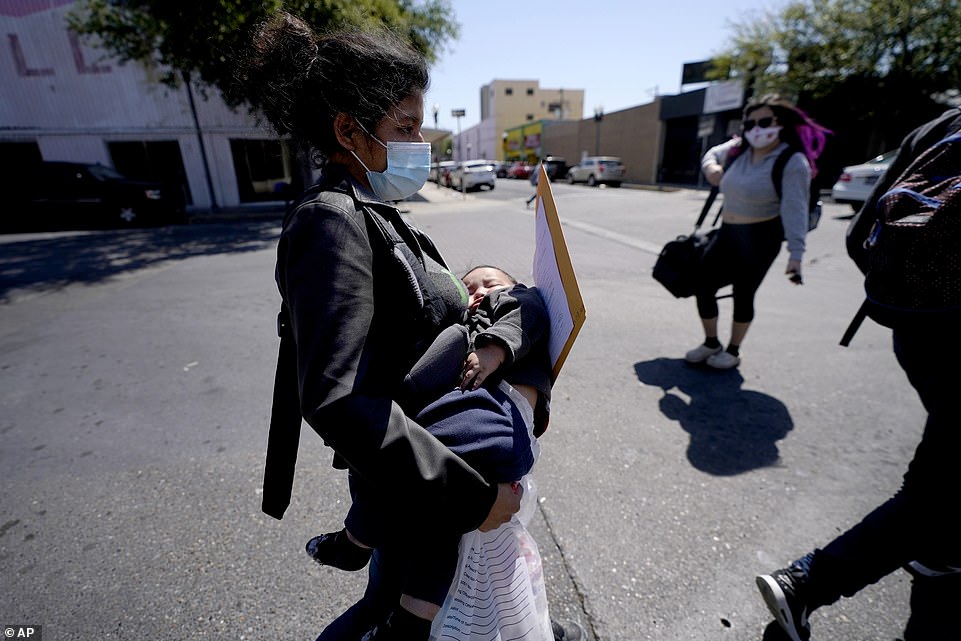 The woman brought her baby with her from El Salvador for the long trip to the U.S. 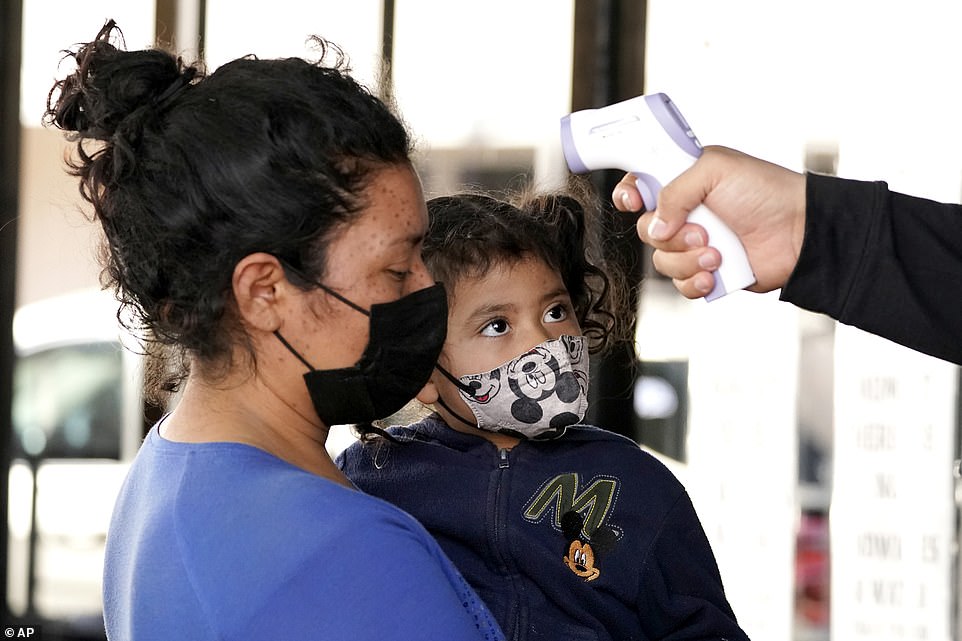 The agency sought assistance from U.S. Immigration and Customs Enforcement to relocate people after 1,000 families and unaccompanied children crossed the border Friday morning alone. Another 1,000 people had yet to be processed.

News organizations have been requesting permission to visit the shelters housing thousands of migrant children amid reports the kids don’t have enough beds to sleep in or food to eat.

Federal officials have repeatedly denied access to the press although lawyers and some human rights groups have gotten inside.

White House press secretary Jen Psaki said Thursday the administration hopes to have an answer on the press visits ‘soon.’

‘The White House and we all in the administration support finding a way to grant access to the media to the … shelters where these children are staying for a temporary period of time,’ she said. ‘We remain committed to transparency, and we’re considering potential options, and we hope to have an update on that soon.’

Mayorkas’ group on Friday will ‘view operations and receive a briefing on the processing, shelter, and transfer of unaccompanied children arriving at our border,’ the DHS said in a statement. 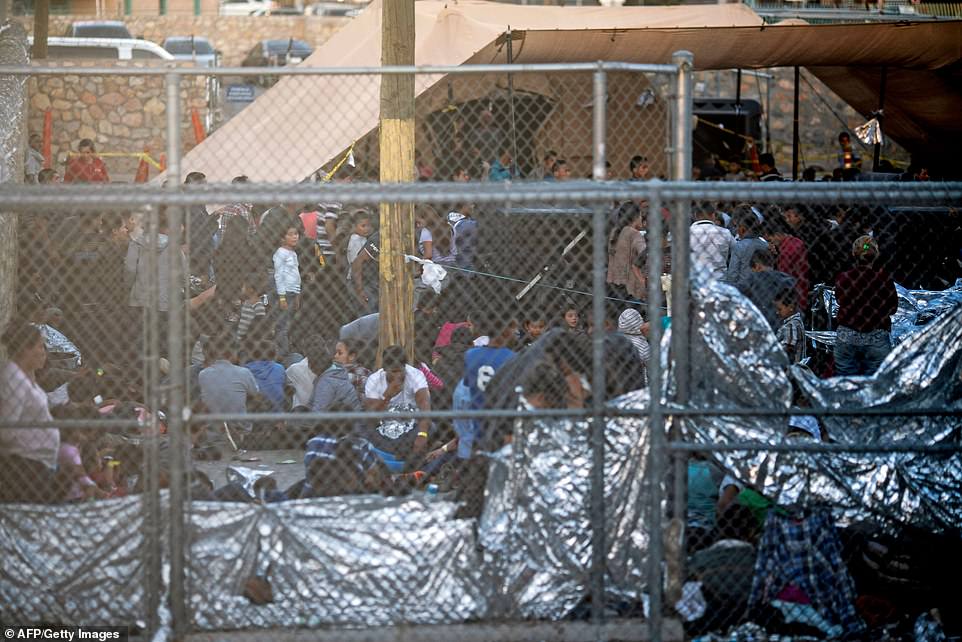 Migrants detained by US Customs and Border Protection are pictured in a makeshift holding facility beneath ‘Paso Del Norte’ bridge, between downtown El Paso and Ciudad Juarez 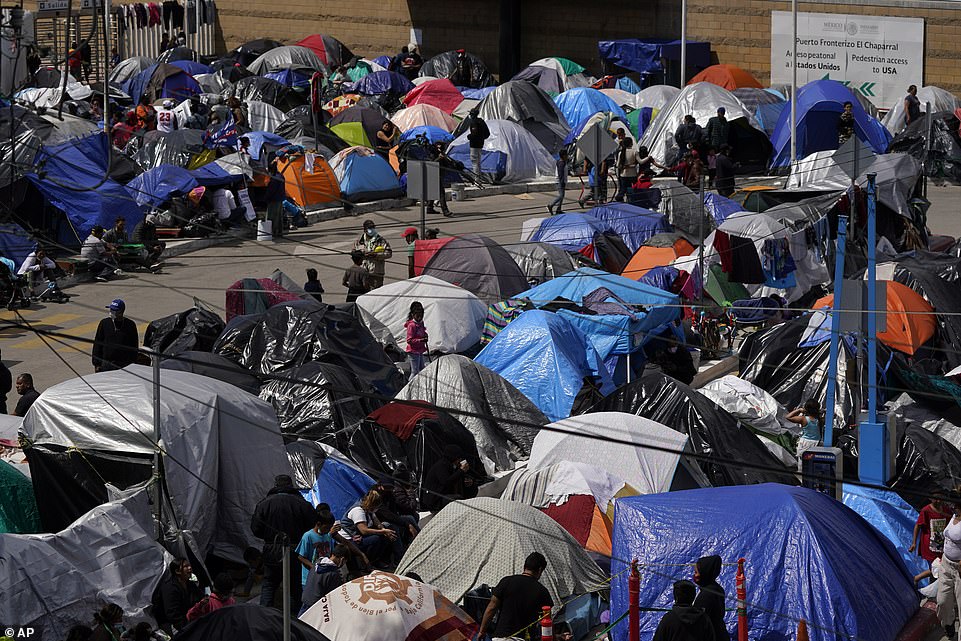 A makeshift camp of migrants sits at the border port of entry leading to the United States, Wednesday, March 17, 2021, in Tijuana, Mexico. The migrant camp shows how confusion has undercut the message from U.S. President Joe Biden that it’s not the time to come to the United States. Badly misinformed, some 1,500 migrants who set up tents across the border from San Diego harbor false hope that Biden will open entry briefly and without notice 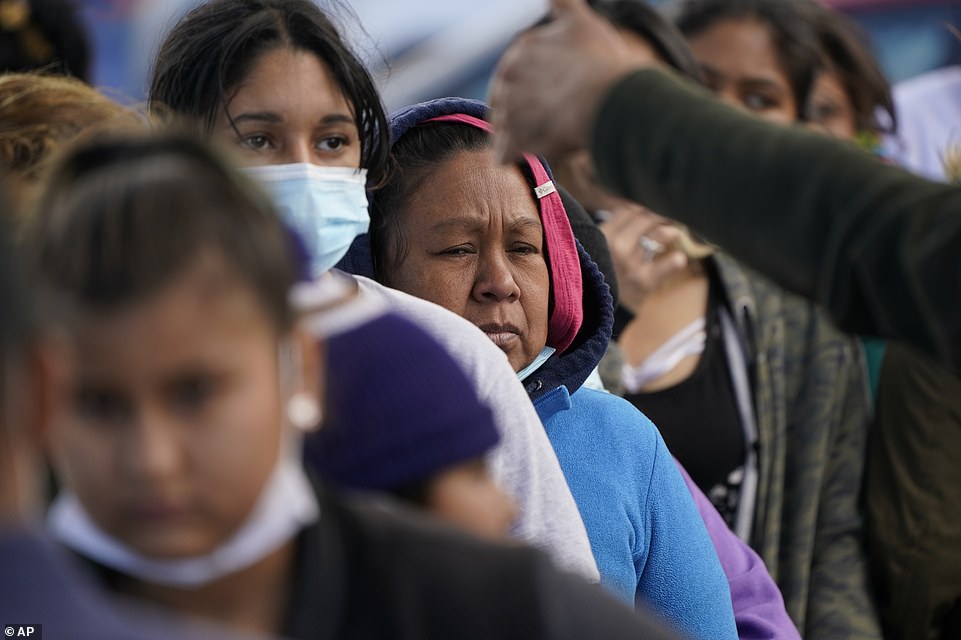 Migrant women are asked to line up for a free meal at a makeshift camp at the border port of entry leading to the United States, Friday, March 12, 2021, in Tijuana, Mexico

Republicans have blamed the record number of border crossings on the Biden administration, claiming the president’s repeal of Donald Trump’s stricter policies has led to the surge.

But Biden administration officials, including the president himself, have said the border is closed and asked migrants not to come.

‘I can say quite clearly: Don’t come over,’ Biden told ABC News in an interview this week.

‘Don’t leave your town or city or community,’ he added.