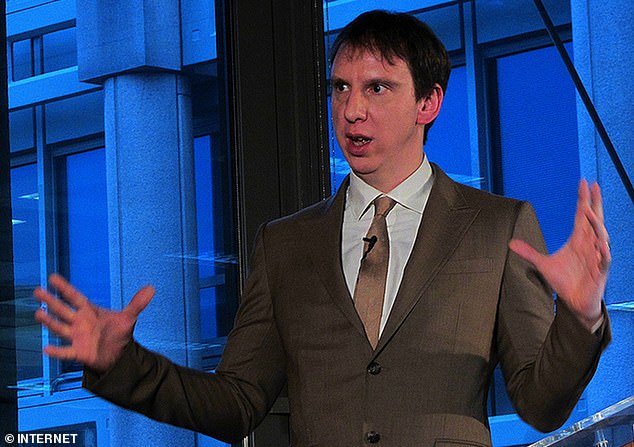 By Mark Shapland For The Daily Mail

The founders and bosses of online gambling firm Gamesys have hit the jackpot after backing a £2billion takeover deal.

The company, which is best known for its gambling sites Jackpotjoy and Monopoly Casino, has thrived since the pandemic began with people stuck at home trying to entertain themselves.

It posted soaring revenues over the period and its share price has jumped more than 187 per cent since March last year.

Winner: Gamesys was founded in 2001 by Noel Hayden (pictured), Andrew Dixon, Robin Tombs and a small team of software developers

The takeover by Bally’s, whose headquarters are in Nevada, is the latest American raid on the British gambling sector and will make Gamesys’s largest shareholders very rich to the tune of more than £500million.

The company was founded in 2001 by Noel Hayden, Andrew Dixon, Robin Tombs and a team of software developers. It was a private firm until its reverse takeover of Jackpotjoy in 2019.

Gamesys was the bigger company and Hayden became the largest shareholder with 15 per cent.

He is set to walk away with £299million from the deal, while Dixon will pocket £106million and Tombs £84million.

Hayden is not a public figure but it is the second major deal of his career. Back in the 1990s, he set up online gaming company Internet Digital Media, selling it in 1999 for £7million and then immediately ploughing the money into his new venture Gamesys.

A source close to Hayden said: ‘He’s flown under the radar but he’s very impressive and knows exactly what he’s doing. Today’s deal has made some people very rich indeed.’

Chief executive Lee Fenton has a stake worth £13.5million, while chief operating officer Robeson Reeves is in line for £14.4million. 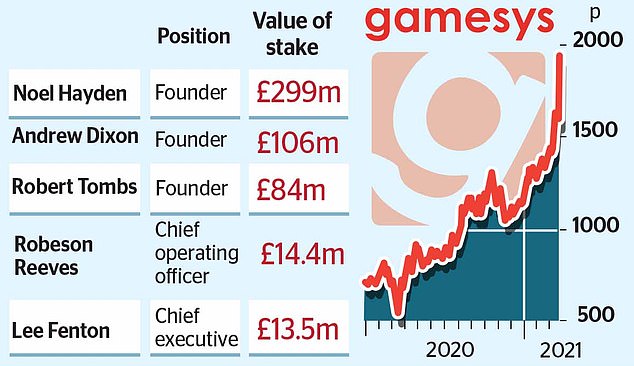 Lockdown winner: Gamesys posted soaring revenues over the period and its share price has jumped more than 187 per cent since March last year

Both are taking top jobs at the combined group. Bally’s, which operates casinos and racetracks in the US, has struggled during the pandemic and has had to temporarily close much of its operations.

The Gamesys deal will boost Bally’s online arm and give it the technology to grow share in the highly lucrative US sports betting market.

The rush into sports betting comes after the state of Nevada legalised it in 2018. Since then a further 29 states have followed.

Soo Kim, chairman of Bally’s, said: ‘We believe that this combination would mark a transformational journey step in our journey to become a gaming company.

‘Gamesys’ proven technology platform combined with US market access present significant opportunities in the US.’

The new group would be based in Rhode Island and retain a listing on the New York Stock Exchange. Gamesys’ boss Fenton would become chief executive.

The deal comes after a flurry of takeover interest from the US for UK gambling firms, with William Hill expected to complete its £2.9billion takeover by Caesars in the coming days. Ladbrokes owner Entain was the target of casino giant MGM but talks between the two ended in January.

Analysts believe there could be more deals in the pipeline, with Playtech and 888 Holdings prime targets.

Russ Mould, analyst at AJ Bell, said: ‘There has been a frenzy since the American regulatory changes, as leading players have jostled for position in what could be a betting boom Stateside, just as other markets, including the UK, tighten their rules.’