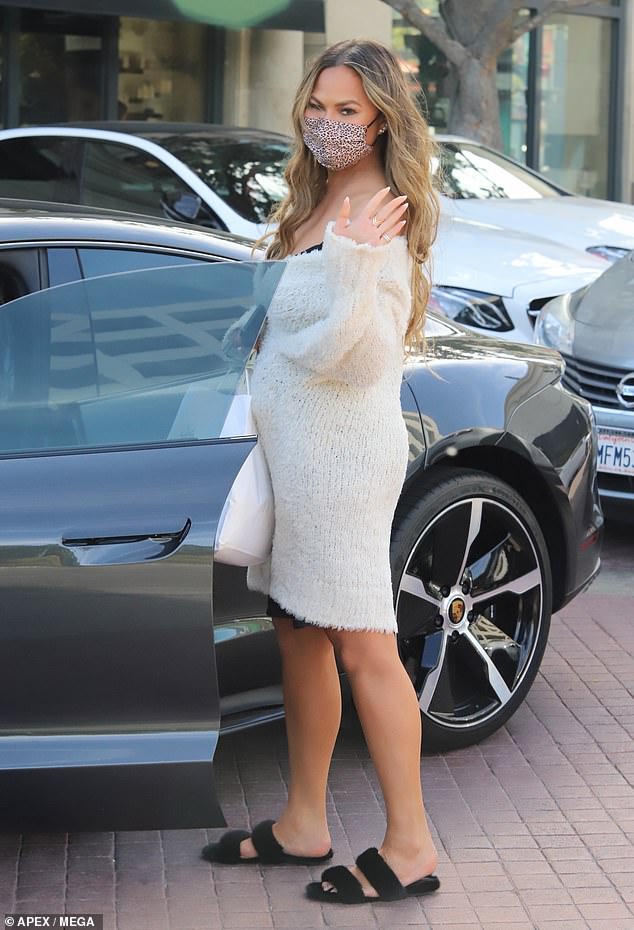 Chrissy Teigen has been pictured out after quitting Twitter yesterday, and has posted another lengthy explanation for her exit, this time on Instagram.

Chrissy – who spent over 10 years on the popular social media platform – was seen stepping out in Los Angeles on Wednesday amid her dramatic departure from the micro-blogging site.

The 35-year-old wife of John Legend also took to Instagram on Thursday to explain that she did not blame Twitter, trolls or bullying for her leaving, but instead clarified that it was just time for her to move on.

Bye for now! Chrissy Teigen steps out in LA after quitting Twitter as she says the ‘bullies and trolls’ are NOT the reason behind exit in another lengthy explanation on Instagram

‘It’s true! The platform no longer serves me as positively as it does negatively, so with that I bid you adieu,’ Chrissy told her 34.4m followers on Instagram.

‘But I want to say that this is absolutely NOT twitter’s fault – I believe they do all they can to combat relentless bullying, any honestly, it’s not the bullying!!’

‘You guys have no idea how much they’ve reached out and worked with my team and me personally. It’s not the platform. It’s not the “bullying”. And it’s not the trolls.’

Gone: Chrissy – who spent over 10 years on the popular social media platform – was seen stepping out in Los Angeles on Wednesday amid her dramatic departure from the site 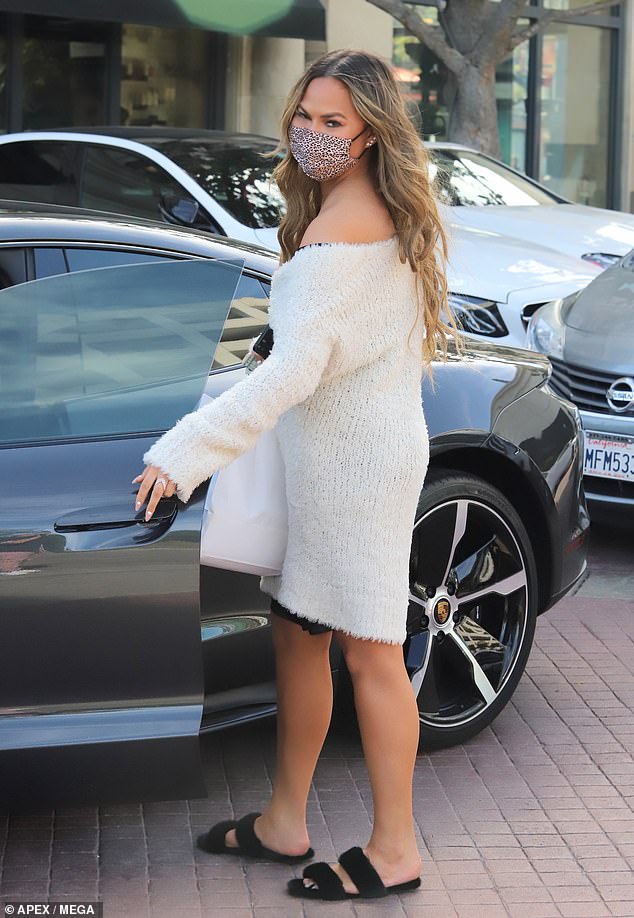 Explanation: The 35-year-old wife of John Legend also took to Instagram on Thursday to explain that she did not blame Twitter, trolls or bullying for her leaving

Referencing the far-right conspiracy theories that she has been the subject of over the past year, Chrissy added: ‘And to the Q anon people who think I’m in Guantanamo Bay right now, lol. I saw “Q: into the storm” and saw what I’m working with here. And I, lol, I no longer care. Don’t flatter yourselves.’

The model directly addressed her 13.7million followers on Wednesday as she explained the reasons behind her sudden departure. 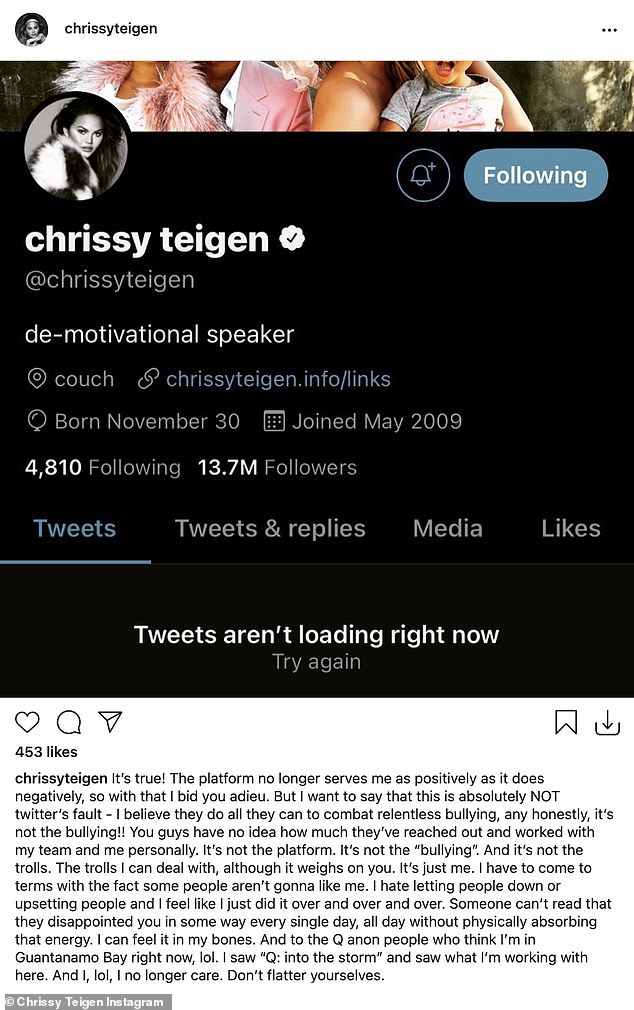 Making it clear: Chrissy posted another lengthy explanation for her exit on Instagram, Thursday 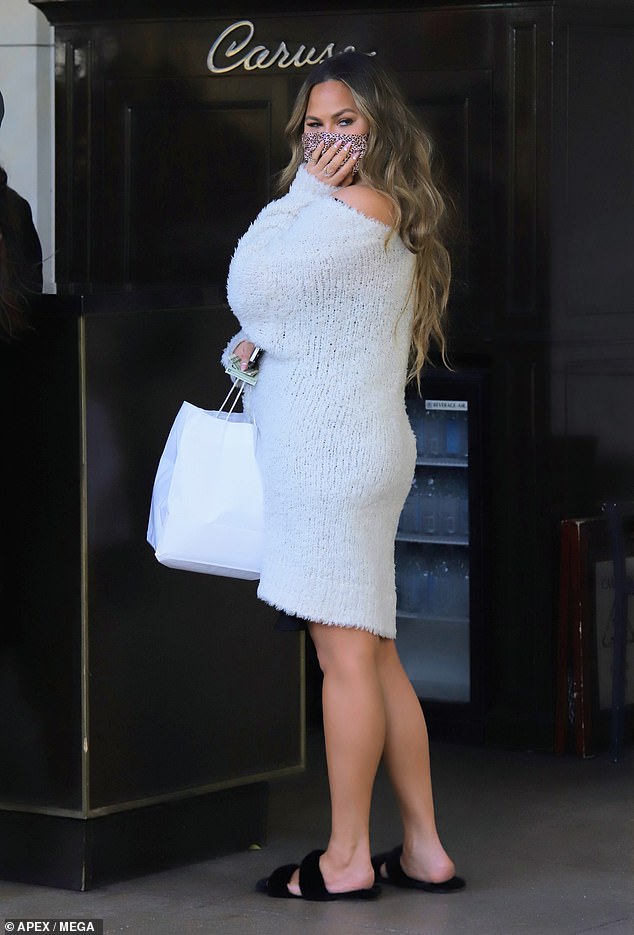 Silencing herself: Chrissy decided that it was time to end her prolific reign on Twitter

Cosy outing: The model opted for comfort as she was seen in LA amid her Twitter exit

Chrissy’s lengthy farewell message comes amid a string of negative comments from trolls, which the model said had left her feeling ‘deeply bruised.’

‘Hey. For over 10 years, you guys have been my world. I honestly owe so much to this world we have created here. I truly consider so many of you my actual friends,’ she began.

‘But it’s time for me to say goodbye. This no longer serves me as positively as it serves me negatively, and I think that’s the right time to call something,’ she admitted. 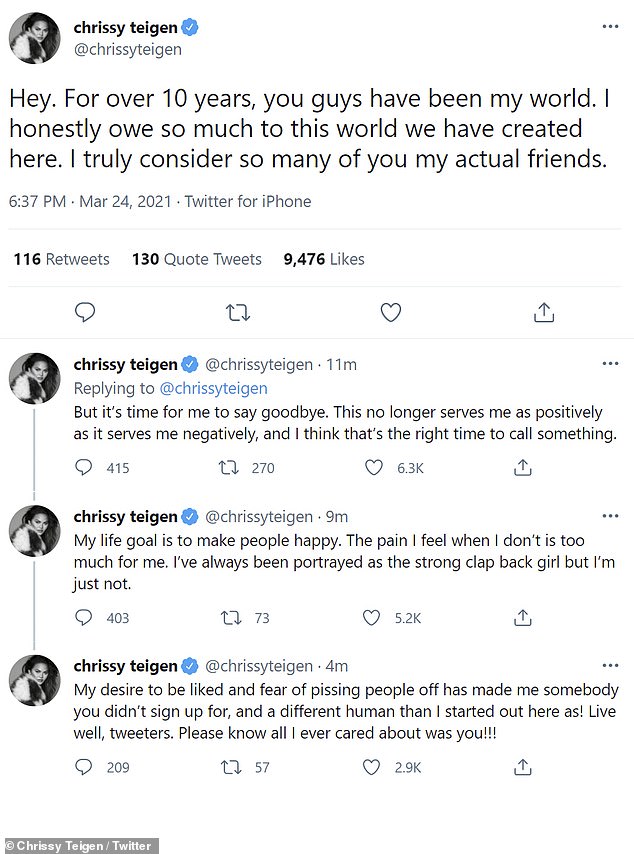 Change of heart: ‘Hey. For over 10 years, you guys have been my world. I honestly owe so much to this world we have created here. I truly consider so many of you my actual friends,’ she began 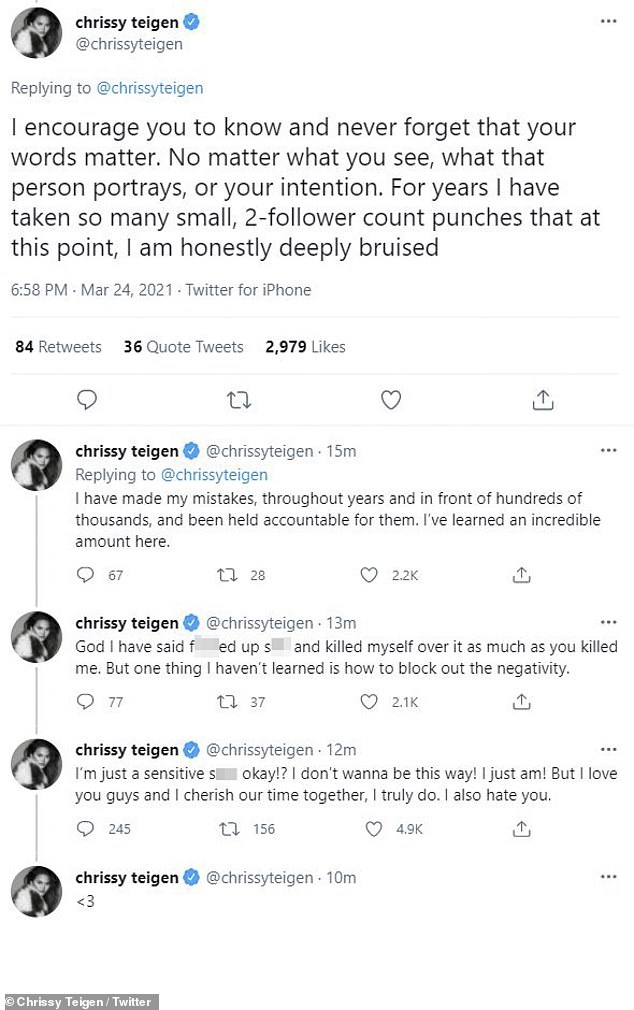 Negativity: Teigen noted that, over the span of her nearly 11 years of Twitter, she has ‘said f**ked up s**t and killed myself over it as much as you killed me. But one thing I haven’t learned is how to block out the negativity

‘My life goal is to make people happy. The pain I feel when I don’t is too much for me. I’ve always been portrayed as the strong clap back girl but I’m just not,’ wrote the star, referring to her frequent fiery Twitter exchanges.

‘My desire to be liked and fear of pissing people off has made me somebody you didn’t sign up for, and a different human than I started out here as! Live well, tweeters. Please know all I ever cared about was you!!!’

‘I encourage you to know and never forget that your words matter. No matter what you see, what that person portrays, or your intention. For years I have taken so many small, 2-follower count punches that at this point, I am honestly deeply bruised. 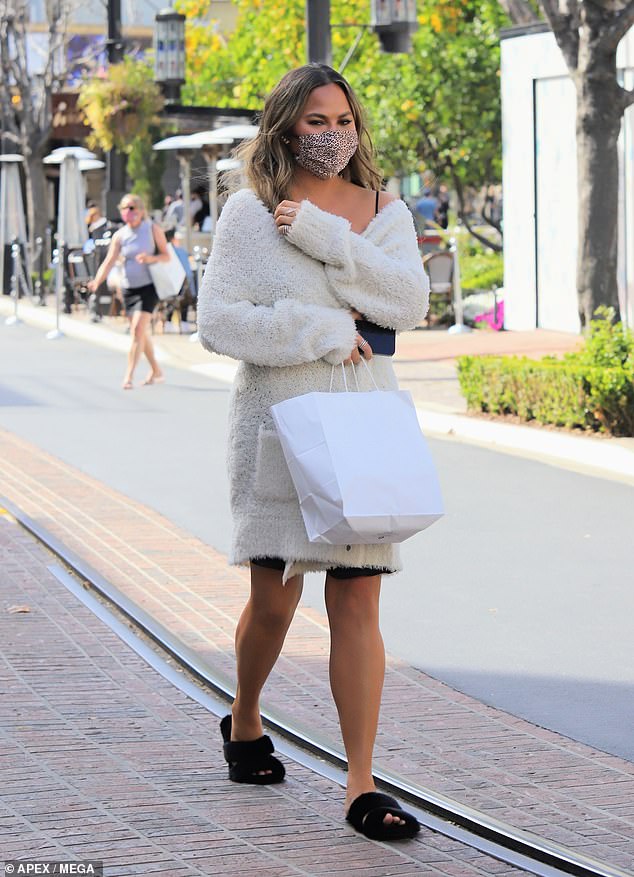 Off she goes: Chrissy got busy with her shopping after making a dramatic exit from Twitter on Wednesday

‘I have made my mistakes, throughout years and in front of hundreds of thousands, and been held accountable for them. I’ve learned an incredible amount here.’

The most recent backlash Teigen faced – which she responded to on the platform this week – was for collaborating with Kris Jenner on plant-based cleaning product line, Safely.

Meanwhile, Teigen noted that, over the span of her nearly 11 years of Twitter, she has ‘said f**ked up s**t and killed myself over it as much as you killed me.  But one thing I haven’t learned is how to block out the negativity.

‘I’m just a sensitive s**t, okay!? I don’t wanna be this way! I just am! But I love you guys and I cherish our time together, I truly do. I also hate you,’ concluded the star, with a heart. 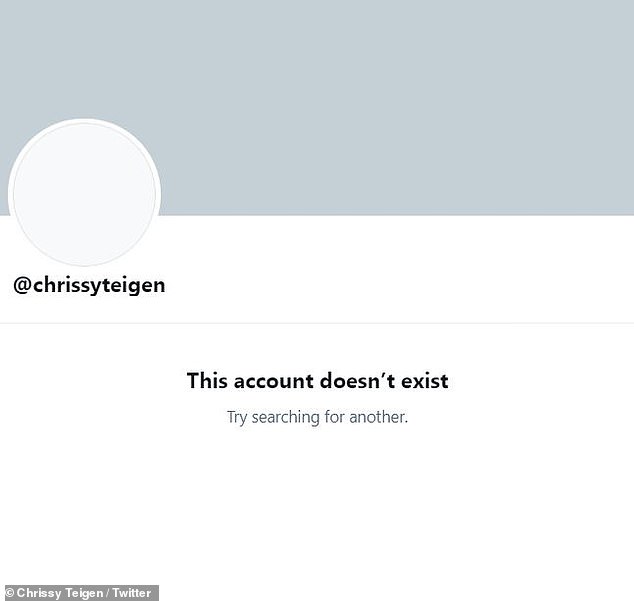 In the days leading up to her account’s deletion, Teigen revealed that she and Kris Jenner (and Emma Grede) had teamed up to create a line of cleaning plant-based products,

‘Years in the making – excited to finally announce the launch of @GETSAFELY with two absolute bosses, Emma Grede and @KrisJenner,’ tweeted Teigen on Monday along with a photo of herself and Jenner.

‘Plant based with aromatherapy oils annnnnd it works. Could cry. Cannot wait to see this in your homes. (Really!!!)’

Despite her obvious excitement over the line’s launch, the Lip Sync Battle social media pages became flooded with criticism pertaining to her association with the Kardashian clan.

‘Love you but don’t like you getting involved with that family. Does not fit with your brand,’ tweeted one disappointed fan, adding: ‘You are better than this. Sad to see this.’

Another firmly stated that they would not be purchasing products from Safely because they refuse to ‘put a penny into a Jenner/Kardashian pocket.’

One Twitter user contested Teigen’s claim that Safely was ‘years in the making’ and even speculated that it was a way to profit off the pandemic.

‘Highly doubt this was “years” in the making. More like, let’s release a cleaning product just long enough after everyone forgot about hoarding hand sanitizer, so we don’t seem like we’re using the pandemic as a tool to profit from,’ their tweet read.

Although many of the tweets were prefaced with how much they ‘love’ Teigen, they also expressed a similar distaste towards the star coming out with ‘MORE products,’ on top of her already successful Cravings empire.

‘I love you so much, Ms. Teigen… but really? MORE products? More profit?’ one tweet began.

‘You are a hero to me in SO many ways, so I say this I love! It just seems like the ever-widening chasm between those who have plenty and those who have nothing is exacerbated by this kind of venture.’

According to People, Safely will offer hand creams, soaps and sanitizers, along with more heavy-duty cleaning supplies and glass cleaner products.

The company, which officially launches on Thursday, wrote that it was ‘dedicated to clean cleaning with natural aromatherapy scents’ in a press release.

Last year, Teigen shared the heartbreak of a miscarriage on the site, posting an anguished picture of her in the hospital. Another image showed her and Legend grieving over a bundle cradled in her arms.

While her candor about the loss of their son won praise, some criticized her for putting such painful moments on social media.

In November, Teigen announced that she was taking a hiatus from social media as she found herself in a ‘grief hole’ following the tragic loss of her baby son Jack.

‘I’m not tweeting much because I’m honestly in a bit of a grief depression hole but do not worry as I have so much help around me to get better and I’ll be fixed soon,’ wrote the model, 34, via Twitter on Nov. 25. 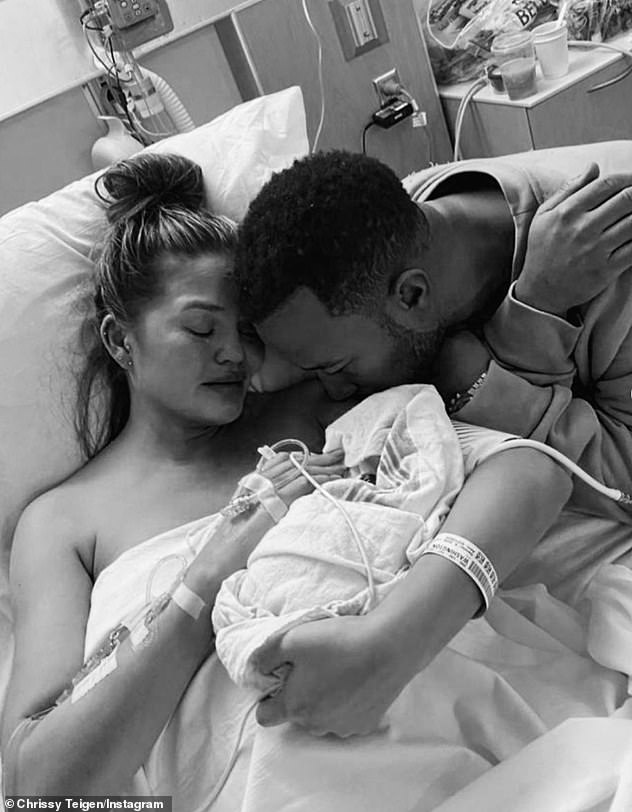 Heartbreaking: Chrissy and John revealed in September that their son Jack was stillborn 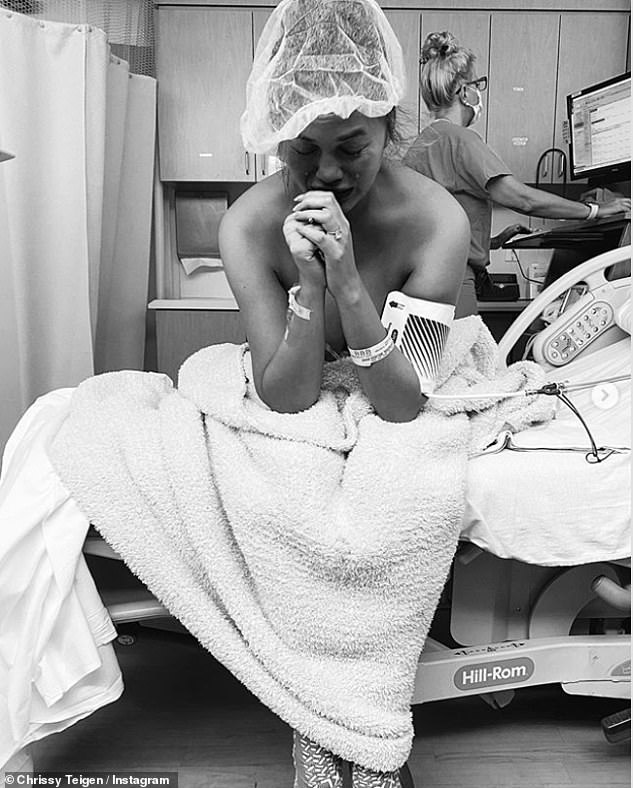 She added: ‘they’ll call when im better and ready for pickup and u can swing by and grab me ok? thank u and love you!’

Chrissy revealed in an emotional Instagram post on September 30th that Jack was born stillborn, after she endured several serious pregnancy complications. 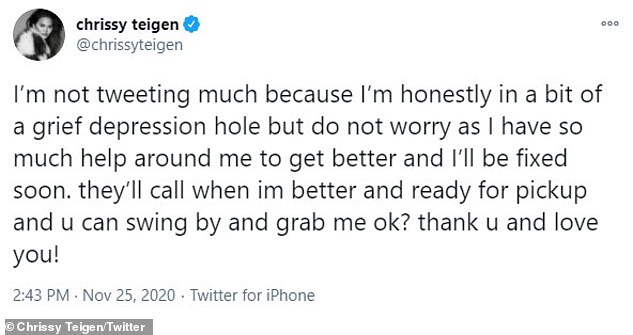 Grief: In November, Chrissy Teigen stepped back from social media as she found herself in a ‘grief depression hole’ following the loss of her baby son Jack