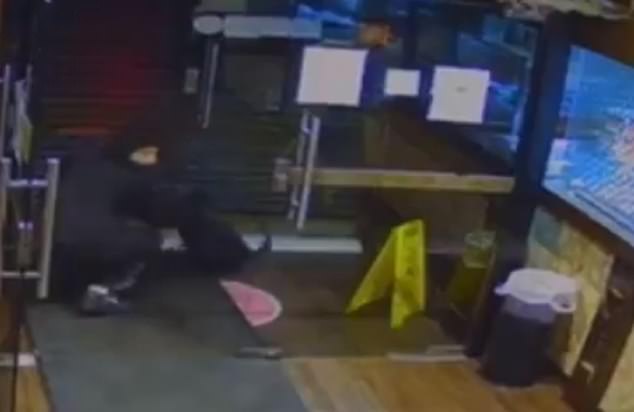 Clean getaway! Moment bungling burglar turns and flees after being scared off by restaurant’s night cleaners during break-in

A restaurant had a lucky escape after a would-be burglar was scared off by night-time cleaning staff.

CCTV shows the moment a masked man forces his way through a tiny gap under metal shutters in an attempted break-in at Spice Village in Southall, west London.

Carrying a black rucksack, the man then quickly creeps through the front doors and makes his way to the nearest table to take something out his bag.

CCTV shows the moment a masked man pushed his way under metal shutters in an attempted break-in at Spice Village in Southall, west London

But seconds later he is startled by staff working at the back the restaurant and runs back over to the entrance and crams himself back under the shutters.

Nothing was stolen and the incident was reported to the police. 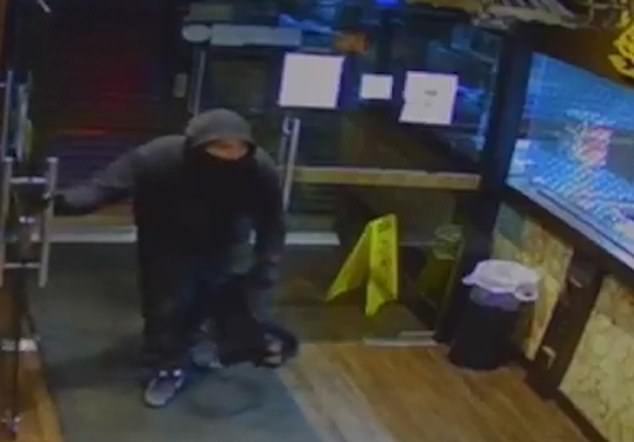 The restaurant’s owner tweeted footage of the incident, saying they had a ‘lucky’ escape following a series of break-ins on neighbours

‘Last night a #Thief broke into our restaurant in #Southall by cutting our entrance shutters at 2am, luckily we had night cleaning staff on duty @MPSSouthallBdwy we need more night patrols,’ they said.

They added: ‘This is the first time it’s happened, but almost all of our neighbour shops have been burgled.

‘We were lucky as we had night staff on duty.’

Spice Village was established in 2004. Serving Pakistani cuisine, it is the second highest rated restaurant in Southall.