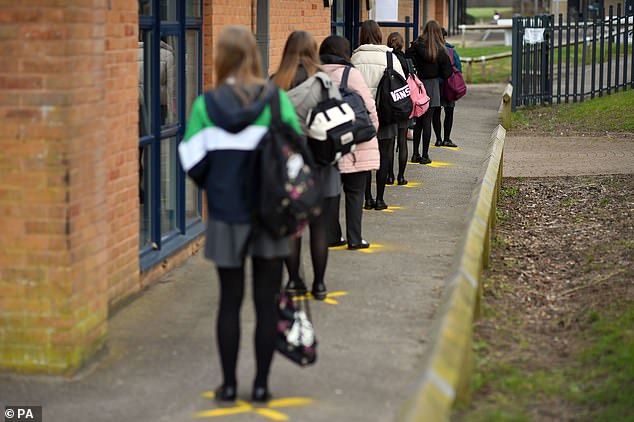 The proportion of pupils attending schools in England last week dropped as more had to self-isolate, government data suggests.

The data suggests 220,000 pupils were self-isolating on Thursday last week due to potential contact with a case of Covid-19, up from 169,000 in the previous week.

And 7,000 pupils were absent as their school was closed due to Covid-19-related reasons, increasing from 4,000.

Around 87 per cent of secondary pupils were in on March 25, a fall on 89 per cent on March 18. Primary attendance also fell to 93 per cent on Thursday from 95 per cent the previous week.

The proportion of pupils attending schools in England last week dropped as more had to self-isolate, government data suggests. Pictured: Pupils arriving and socially distancing while queuing to take a lateral flow test at Archway School in Stroud in Gloucestershire, March 23

Secondary schools in England were given flexibility to stagger the return of their pupils between March 8 and 12 to allow for the mass testing of students.

All students in secondary schools were expected to complete three rapid Covid-19 tests on their return, spaced three to five days apart, then further tests at home twice a week.

The DfE said the main reason for absence among pupils who did not attend school for Covid-19-related reasons was self-isolation due to contact with a possible case inside the school.

On Tuesday, guidance for schools was updated following the Government’s announcement that anyone who receives a positive result using a lateral flow test will be asked to take a confirmatory lab-based PCR test.

All positive results from rapid asymptomatic tests taken by pupils and teachers, either at home or at school, now need to be confirmed with a polymerase chain reaction (PCR) test within two days.

If the PCR test is negative, students and staff will now be able to return to class and stop self-isolating, the advice says.

The percentage of children in school years 7 to 11 likely to have tested positive for Covid-19 in the week to March 20 was 0.43 per cent, up from 0.32 per cent the previous week, according to the ONS estimates.

Geoff Barton, general secretary of the Association of School and College Leaders (ASCL), said: ‘Although there was a slight dip in attendance last week, this was always likely to happen as Covid positive cases emerged and triggered Covid protocols necessitating the self-isolation of close contacts. 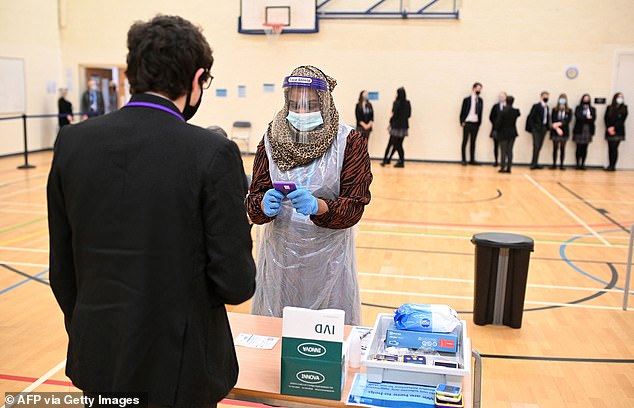 Pictured: A member of staff wearing PPE processes a student’s Innova lateral flow Covid-19 test, which take 30 minutes to give a result, in the Sports Hall at Park Lane Academy in Halifax, northwest England on March 8, 2021 as schools reopen following the easing of lockdown

‘On the whole, however, attendance levels have borne up remarkably well, and great credit is due to schools and their staff for all they have done.

‘There is now the natural firebreak of the Easter holidays and we will see where we are at the beginning of next term.

‘Everybody will obviously hope that the relaxation of Covid restrictions in wider society will not lead to an escalating rate of positive cases in schools, with the disruption this causes to education.’

A DfE spokesman said: ‘Attendance in schools remains higher than at any point during the autumn term, as students and staff continue to follow the protective measures set out in our guidance to reduce transmission of the virus.

‘With the testing programme now in full swing and millions of tests being conducted each week, we are only seeing a small increase in the numbers of students testing positive and self-isolating.

‘We are grateful to everyone who continues testing twice-weekly from home and self-isolating where that is necessary, playing their part in keeping everyone as safe as possible.’