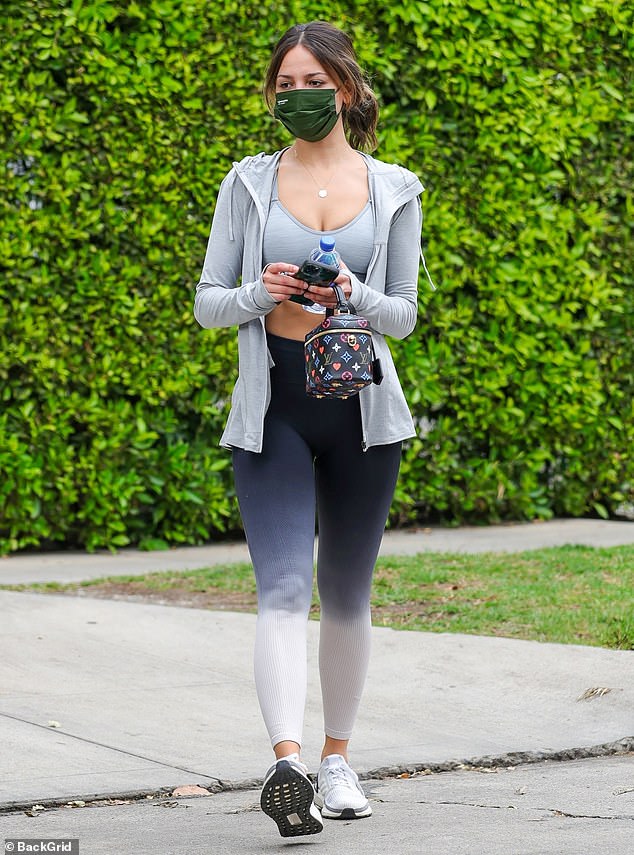 She recently appeared alongside Rosamund Pike in the hit Netflix film I Care A Lot, as well as starring in the blockbuster Godzilla vs. Kong.

But it seems as though actress Eiza Gonzalez still has time for her fitness regime as well as her hectic work schedule.

On Friday, the 31-year-old actress was spotted showing off her toned and taut physique while going for a solo stroll in West Hollywood after finishing up a Pilates class.

Looking good! Eiza Gonzalez was spotted going for a solo stroll after leaving a Pilates class in West Hollywood on Friday

Gonzalez appeared to be making the most of her time in the crisp springtime air as she checked her phone while leaving the fitness studio, wearing a Gonzalez wore a gray Under Armor sports bra that placed part of her toned tummy on full display.

The From Dusk Till Dawn: The Series actress also wore a lighter zip-up hoodie and added a bit of contrast to her ensemble with a dual-tone set of form-hugging athletic leggings.

She tied off her outfit with a pair of multicolored athletic shoes, carried a small Louis Vuitton bag and kept her usually free-flowing brunette hair tied back in a messy bun during her solo outing.

The performer wore a green facial covering to keep herself safe while she spent time in public. 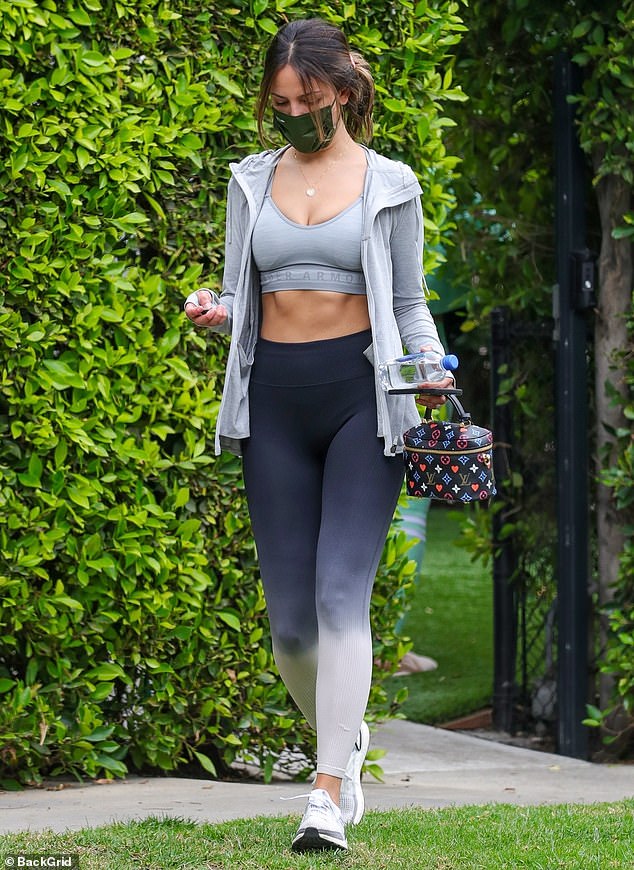 There it is: The Godzilla Vs Kong actress wore a gray Under Armor sports bra that placed part of her toned tummy on full display

In addition to her career as an actress, Gonzalez maintains a presence as an influencer, as she commands an Instagram following of 6.7 million.

On Thursday, the performer posted a set of images to her account from a recent photoshoot she took part in for Women’s Wear Daily.

In the snaps, she was dressed in a collarless white button-up shirt that had been painted with various psychedelic designs, and paired her top with a set of tight-fitting blue shorts featuring similar illustrations.

The Baby Driver actress also wrote a brief message in the post’s caption, which read, ‘Thank you for this exciting conversation about re writing the rules predetermined for me and my heart’s desire.’

Earlier this year, Gonzalez spoke to Byrdie and told the publication that she has been taking care of herself in recent months by ‘drinking a lot of water.’

She also spoke about how she has slowed down and attempted to keep herself happy and healthy over the course of the global pandemic.

Specifically, the actress noted that she has been ‘staying home and doing meditation and doing yoga. I’m, like, working out and drinking tea—I feel like the beginning of that song from Ariana Grande: “I’ve been eating healthy.”‘

Although she has been taking it easy over the past few months, Gonzalez still has several film projects that are currently in the works.

The performer has lent her voice to the upcoming family animated film Spirit Untamed, which serves as a standalone sequel to the 2002 feature Spirit: Stallion of the Cimarron. 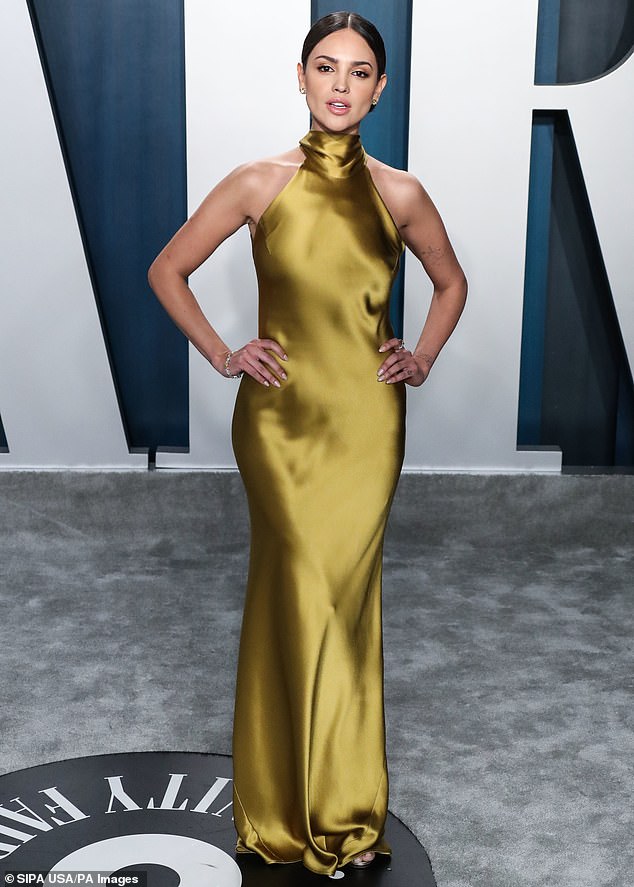 Doing her thing: Although she is primarily an actress, Gonzalez is also an influencer and commands a following of 6.7 million Instagram followers; she is pictured in 2020 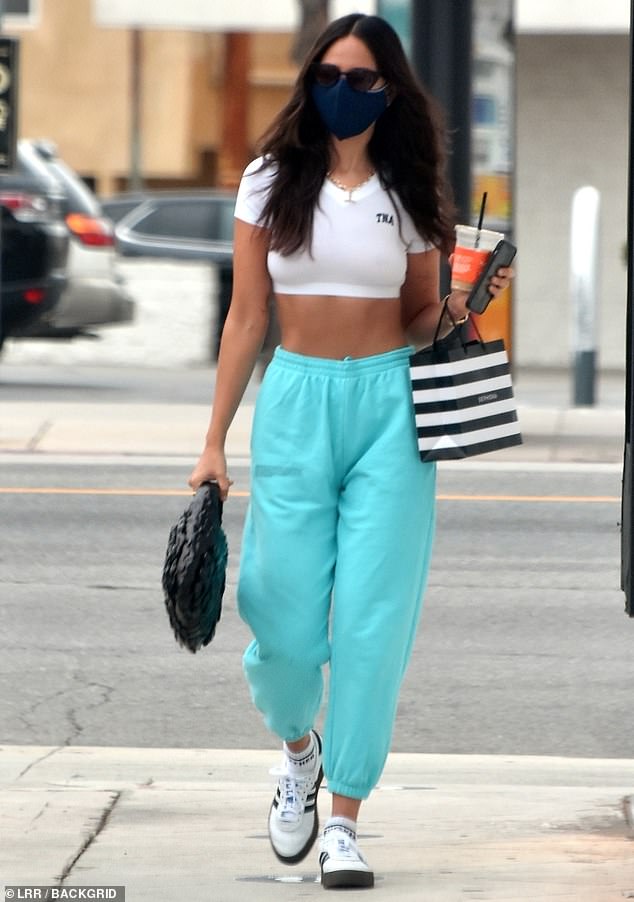 Self-care: During an interview with Byrdie, Gonzalez noted that over the course of the pandemic, she has been ‘staying home and doing meditation and doing yoga’; she is spotted in February

Gonzalez and the Nightcrawler actor are also set to co-star in the upcoming action-thriller film Ambulance, where they will be seen alongside Yahya Abdul-Mateen II and Garret Dillahunt, among others.

After three months of on-set work, the Michael Bay-directed feature recently wrapped filming and moved into the post-production stage.

During the interview, the actress expressed that although she had her reservations about interacting with other people. she was ultimately glad to get back to work.

‘It was really scary going back to set, but it’s been it’s been good. It’s been necessary for my mental health, I think. It’s the perfect antidote for what I needed right now,’ she said.

She added, ‘It was definitely weird to go back to set and that amount of proximity with people; it’s like you’re going from zero to 100. It just felt like first day of school all over again.’ 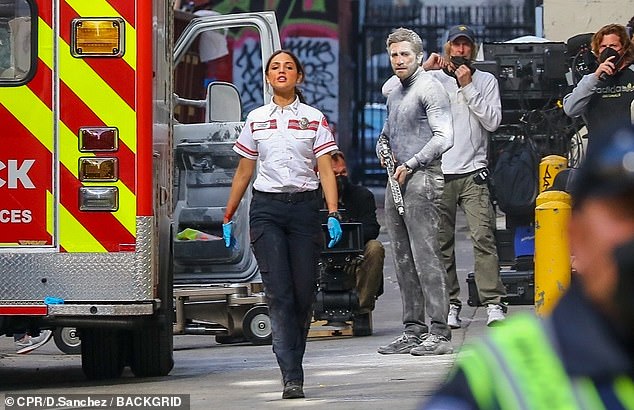 Sudden change: The actress also noted that going back to work on the set of Ambulance after having stayed at home for so long felt like she went ‘from zero to 100’