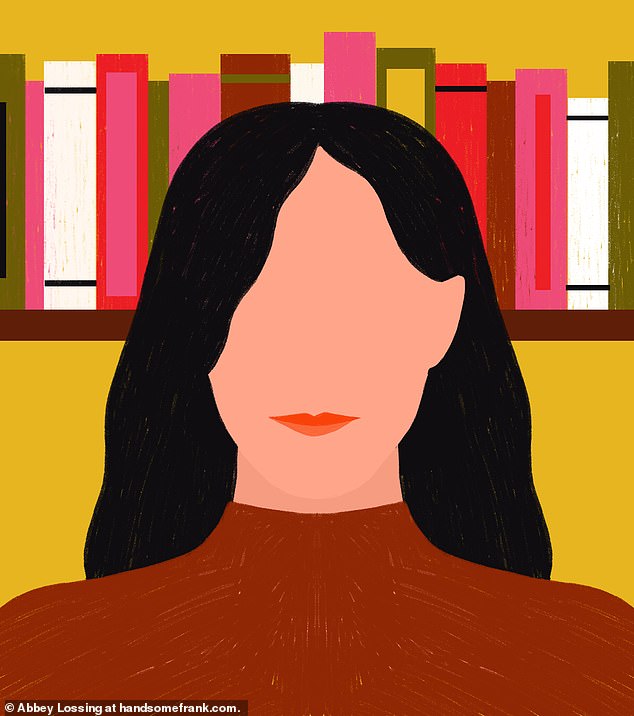 Liz Jones’s Diary: In which I’m ready for our close-up

By Liz Jones Diary for The Mail on Sunday

‘Take your laptop to the bedroom,’ he said. I wasn’t expecting this

I’ve gone mad. I was lulled into a false sense of security: you know how men always want you to get on top, and you do it, even though you know you look terrible from that angle, because he promises he will keep his eyes closed, and then he peeps? Well, something similar happened. I was persuaded to do a Zoom call with the man I’m trying to win back. It took a strange turn.

I agreed because I now have a lovely new sofa, and a bookshelf filled with only intelligent tomes (ie, the ones left behind when my husband moved out); my pony books (extensive) are stashed in a cupboard. Also, the column where I write about wanting him back and setting out to do so is looming ominously, so I figured it was good to get in early before he takes out a restraining order. So it was either a Zoom call, given restrictions are still in place, or take down the internet and close all the newsagents. I considered the former slightly less work.

I was ready. Several inches of make-up: primer, tinted moisturiser, foundation, concealer, powder. Tonged hair. Eyelashes separated with a pin: difficult with lots of collie noses poised to jog. Candles lit. I’d even defrosted my fridge: I kept reminding myself this was Zoom not Through the Keyhole. He sent the link. The thrill of that email was like the one I got when He first contacted Me*. The one that read, ‘I hear you’ve gone off me.’ (I’d written a column about how all my pin-ups were now gay/dead/fat.)

I clicked, and he loomed into view. I hadn’t activated my mic, or the video, so I could just observe for a few seconds, as though he were behind a two-way mirror. I was positioned a long way from the camera, in the hope I’d be a dot with Michael Jackson’s hair, but then discovered I couldn’t reach the keyboard. I’d hidden my wine glass behind Mini. I noticed he was in a kitchen, but not one I recognised. I know the brands, though, having studied Alicia Silverstone’s Clueless at Advanced Level: Sub-Zero fridge and wine cooler (I thought he no longer drinks? Or is that me?). Wolf cooker with red knobs (I remember the surprise I’d got the first time we slept together, given I’d only slept with one white man before him, and as that took place in a suite in the Dorchester I’d pushed a button and lowered blackout blinds; he could have been anyone, really). He didn’t look nervous. My stomach lurched. I remembered the first time we’d met in the flesh, in the mid-80s. I’d gone to his after-concert party with my friend Sue Needleman. I’d queued for the buffet and then, spotting my moment, had gone over to talk to him. My knees actually buckled. I lost my risotto ball. I clicked. He smiled when he saw me. Sat up.

‘You haven’t changed,’ he said.

‘Where are you calling from?’

‘Are you locked down with anyone?’

Me: ‘Um. I chose another man over you. In fact, the reason I pursued you in the first place was that you remind me of him.’

Me: ‘I always make bad decisions. I chose my husband over the Osama Bin Laden lookalike because I felt sorry for him.’ (I was giving a Christmas party the night before we flew to Thailand and Osama rang me, saying he wanted to have dinner. My future husband looked ashen when he realised who was calling.)

Him: ‘Unplug your laptop and take it up to the bedroom.’

I was shocked. I wasn’t expecting this. And isn’t Zoom easily hacked? What if my podcast producer suddenly pops up? What if Gracie has put herself to bed and made a muddy nest in the pillows, as is her wont?

I panicked. This was turning into Through the Keyhole after all! He hadn’t even noticed my bookshelf!

*You see, I’m not a stalker

Join Liz and her trusty (long-suffering) assistant Nicola as they dissect her weekly YOU magazine diary and delve into the archives to relive the bust-ups, betrayals, bullets… and so much more in this brilliant podcast. They’re outspoken, outrageous and utterly hilarious. Find it now at mailplus.co.uk/lizjones, iTunes and Spotify.