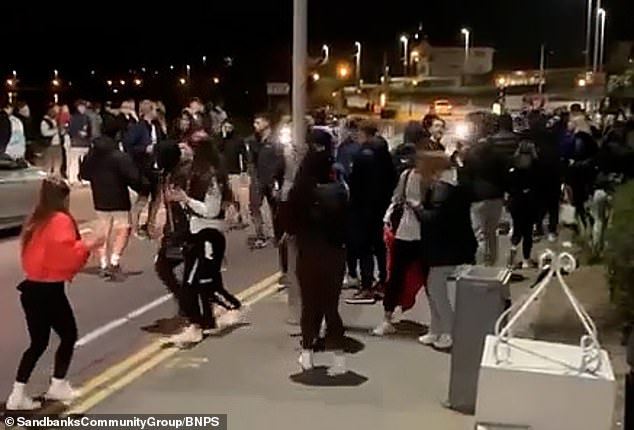 Two hundred partying students have been slammed for turning the millionaires’ resort of Sandbanks into the ‘Wild West’ as they spat and bottled police officers.

Brawls broke out and police officers were assaulted during the illegal beach party attended by sixth form students in Poole Harbour, Dorset, on Thursday night.

One 19-year-old reveller who suffered head injuries after being struck with a bottle turned on two female police officers who were helping him.

He was arrested before being taken to hospital for treatment.

Appalled residents of the exclusive peninsula woke to find the beach strewn with litter, beer bottles bobbing in the sea and nitrous oxide capsules scattered over the pavement.

Two hundred partying students have been slammed for turning the millionaires’ resort of Sandbanks in  into the ‘Wild West’ in Poole Harbour, Dorset 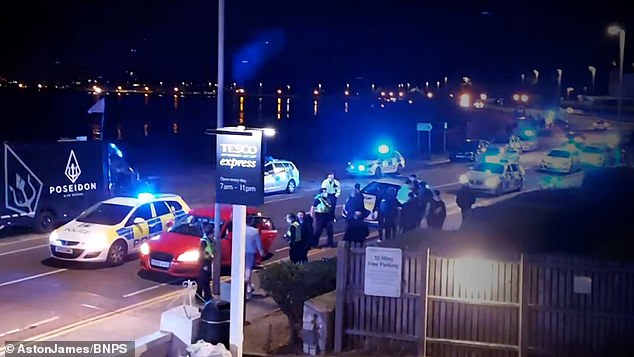 Police descended on the illegal party at 9.30pm on Thursday before the sixth formers bottled and spat at them

The event, which breached of coronavirus rules, was held by local students celebrating the start of the Easter half-term.

It began at about 5pm on Thursday at Kite Beach — a usually quiet enclave by the Sandbanks panhandle — and opposite a Tesco Express where much of the alcohol was brought.

Police were aware of the mass gathering and officers checked on the revellers at 8pm to find they were mostly ‘polite and amenable’ and so took no action to disperse them.

By 9.30pm officers began putting out a series of fires on the beach and warned a reveller seen throwing a bottle into the sea.

One fight erupted outside the Tesco store minutes later before a much larger brawl was staged on Shore Road. 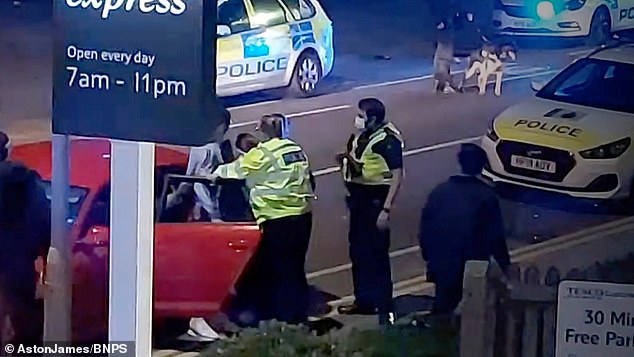 Police officers stop one of the revellers by a car outside a Tesco Express where fights erupted at around 9.30pm

Video footage shows groups of male teenagers throwing punches and lobbing beer bottles at each other with no police presence around.

Motorists, many of them residents returning home to Sandbanks, can be seen struggling to drive through the carnage.

Police dispersed the group by 11pm and issued section 35 notices which allowed them to make arrests if people didn’t leave.

Locals today said the police should have broken the party up much sooner.

Jodie Garnham said: ‘I was literally driving down the middle of it.

‘It was out of control. Kids running into the road, glass everywhere. Police where severely out numbered. 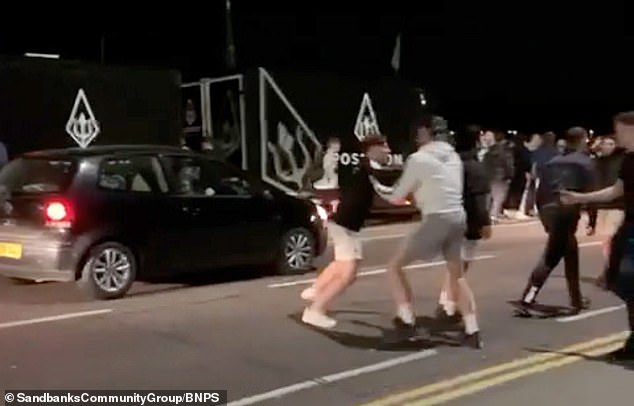 The partying students scrap in the middle of the street outside Tesco in Sanbanks, Dorset

‘I feel like they should have been dispersed earlier in the evening before the drink fully started getting to these kids.’

Petra Carrier said: ‘Blood and glass everywhere, traffic bought to a standstill. They should have been moved on when they first arrived in such large numbers.’

Another local resident said: ‘It was like the Wild West. Later into the evening, once the alcohol had kicked in, all you could hear was glass smashing and shouting and yelling.’

David Morley, the chairman of the Sandbanks Community Group, said: ‘They were sixth formers celebrating the end of term. They were mostly well behaved but then the drink started to take its toll and it got a bit more out of control.

‘Thank goodness the police were there. People were really shocked to see that kind of behaviour in a quiet neighbourhood.’ 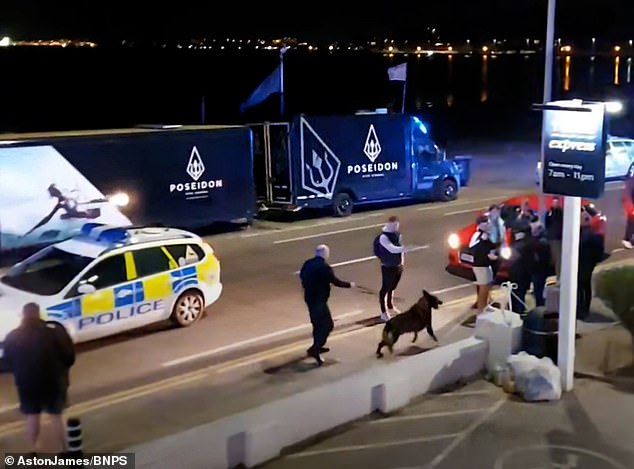 A fight breaks out outside the Tesco as police drive past in the road. Assistant Chief Constable Sam de Reya, of Dorset Police, said: ‘This incident involved a large number of people and we had to deploy specialist units, including the dog section, to the scene to assist in dispersing the group’

He said the litter left behind was ‘horrendous’, adding: ‘There was mountains of it scattered all over the beach.’

Environmental campaigner Oly Rush was on the beach at dawn yesterday (Fri). He said: ‘Right up and down the beach there was broken glass, beer cans and bottles that had just been left like at a festival site.

‘A lot of it was already in the sea after the tide had come in.

‘After it had been cleared up it, two big bins were full and there was about 20 bags of rubbish left next to them.

‘There is no excuse for it but once people see one person leave their litter behind they think it is ok to do the same.’

Assistant Chief Constable Sam de Reya, of Dorset Police, said: ‘This incident involved a large number of people and we had to deploy specialist units, including the dog section, to the scene to assist in dispersing the group.

‘The pandemic is not over and large numbers of people gathering together increases the risk of spreading Covid-19.

‘Not only was this in breach Covid-19 legislation, there were reports of criminal and public order offences, which unnecessarily drew on a significant amount of police resources.’