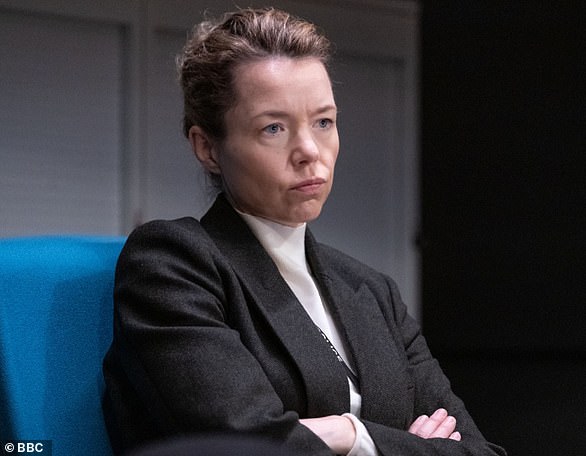 Line Of Duty creator Jed Mercurio excited fans when he shared the first clue about the plot of season six to Twitter.

Uploading a snap of a packet of the Australian chocolate biscuits TimTams with the caption ‘#LineofDuty Series 6 Plot Clue No. 1’, fans began to ferociously speculate as to what it might mean.

But one plot point hanging over the next season of the show is about the identity of the ominous ‘H’.

While the mystery was somewhat answered in the season five finale, it was also revealed that there are FOUR people pertaining to be ‘H’, with the final one still unknown.

So who could it be?

She was one of season five’s stand-out characters, swooping in towards the end of the series to interrogate Ted Hastings – highly suspected to be ‘H’ at the time.

And while she simply seemed to be excellent at her job – and hellbent on uncovering the corruption within the department – could it be that Patricia Carmichael was SO keen to pin the blame on Ted to take the focus away from herself.

Could SHE be the fourth ‘H’?

Her position of power and respect, along with her unnaturally steely and cut-throat demeanor, could well point to this.

Ted Hastings was pinpointed by viewers of the show, as well as the characters on the show, to be a candidate for ‘H’.

But it seemed he was exonerated by the end of season five, allowed to walk free.

But could be potentially be triple-crossing us all? Could he in fact STILL be the potential fourth ‘H’.

The biggest issue with this theory is that Gill Biggeloe – one of the three revealed to be ‘H’ – was so against him. Surely she wouldn’t be working to deter him if they were in league?

UNLESS, she doesn’t KNOW he is the fourth ‘H’?

Detective Chief Constable Andrea Wise was new to the show in season five and is another high-powered contender for ‘H’.

She has been constantly interfering when it has come to supporting AC-12’s investigations, removing them from the investigation into Operation Pear Tree. She also instigated the Ted Hastings investigation.

She is also keen to cover up police corruption, despite announcing at the end of season five: ‘This constabulary will work tirelessly to root out rotten apples in its ranks.’

Police and Crime Commissioner Rohan Sindwhani demanded to be ‘in on’ a meeting between Andrea Wise and Ted Hastings. This might be a small clue but any clue could be valid at this point.

Any shady behavior suggests ‘H’ is at play, and so Rohan could indeed be culpable.